Up until about 18 months ago, if you wanted a pocket-sized compact camera with a decent zoom range, you had a simple choice; either a Ricoh R-series or a Panasonic Lumix TZ-series. The latter especially proved to be very popular, particularly the excellent TZ5, helping to place Panasonic at the top of the compact camera market and prompting several other manufacturers to try and get in on the “travel camera” action. Canon’s first attempt was the PowerShot SX100 IS, followed last Autumn by the SX110 IS, both of which had all the right features and an affordable price tag, but lacked the TZ5’s compact shape and robust build quality. Other rivals include the Olympus mju 9000. 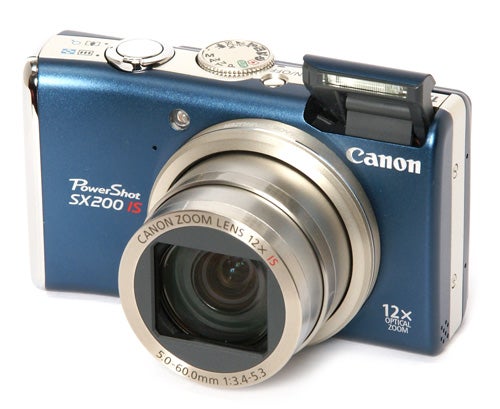 Earlier this year Panasonic launched the expensive but superb Lumix TZ7 to wide acclaim, featuring a 12x zoom lens, 3-inch monitor, 10MP sensor and its knock-out punch, HD video recording with stereo audio. However Canon has just launched a potential rival in today’s review camera. The new PowerShot SX200 IS features a 12x zoom lens, a 3-inch monitor, a more powerful 12.1-megapixel sensor and HD video recording (although only mono audio). It matches the TZ7’s hefty £290 price tag, but can it really match it in performance?


There’s no doubt that it looks the part. Canon has refreshed the appearance of all of its camera lines with its new spring launches, and the SX200 looks totally different to the previous SX models. The body is made of plastic with aluminium panels front and rear, and the build quality is generally very good, although it does creak a bit if squeezed. Contrary to what you may have read elsewhere the tripod bush is metal, as is the battery hatch hinge, which is usually a good sign. 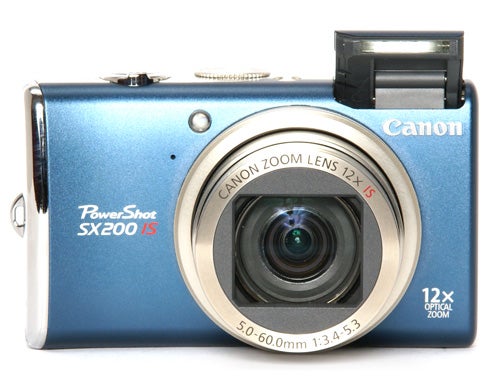 It’s a good looking camera, a clean and modern design with an attractive matt-metallic and chrome finish, and is available in red, black or blue. The body shape is comfortable and secure to hold and the controls are sensibly laid out and accessible, but it’s not a particularly small or lightweight camera. It measures 103 x 60.5 x 37.6 mm and weighs 243g ready to shoot (5mm thicker and about 14g heavier than the TZ7) so you couldn’t in all fairness call it pocket-sized, but it wouldn’t take up much room in a bag or backpack.

The SX200’s most obvious exterior feature is its automatic pop-up flash, and by automatic I mean that it pops up every time the camera is switched on, whether you want it to or not. It’s disconcerting at first, and depending on how you normally hold a camera you might find it gets in the way a bit, but it’s not particularly annoying. Also it is motorized rather than spring loaded, so it also pops back down when the camera is switched off, which I have to admit is pretty slick. Wow-factor aside though, the powered flash mechanism is really a bit of a gimmick and is just one more thing that might go wrong, especially since the moving parts are made of plastic.


The other big feature is of course the 12x zoom lens. It’s a serious-looking bit of glass, with a focal length of 5.0 – 60.0 mm, equivalent to 28 – 336mm (TZ7 is 25-300mm), but despite its size it folds up almost flush with the camera body. While it’s not particularly fast at f/3.4 – 5.3 it is of high optical quality, and also includes Canon’s excellent optical image stabilisation system. 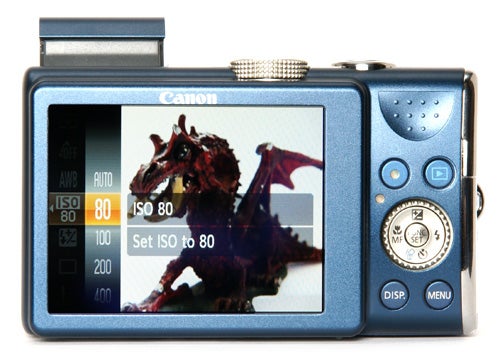 The SX200 IS is the first camera I’ve seen from Canon’s new spring 2009 range, but I’m going to hazard a guess that it’s not the only one to get a completely new menu system, Canon’s first in many years. I have to say it gets my wholehearted approval, particularly the revamped function menu. It looks fresh and modern, and is a great example of clear, simple user-friendly interface design. I hope I’m right and this new menu system is being included across all Canon’s new range. 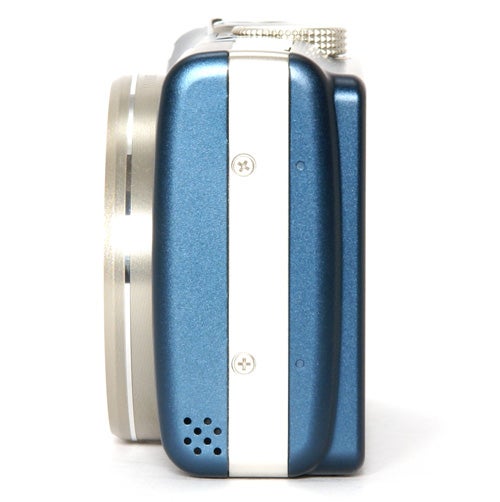 Canon’s monitors are nearly always excellent, and the one on the SX200 is no exception. Although its resolution of 230k is only average these days, it is clear and sharp with an exceptionally wide viewing angle, and has a very good anti-glare coating. I had no trouble using the camera on one of the rare a sunny days we’ve had lately.


The SX200 IS has HD video recording capability, or at least 1280 x 720 at 30fps, which as our ever-astute readers will no doubt point out is not really “full HD”. It still looks pretty damn good, although with only mono audio and no optical zoom while recording it looks a little weak compared to the TZ7’s more sophisticated stereo audio and full zoom capability, not to mention its AVCHD Lite encoding. The SX200 does feature an HDMI connector, so you can plug it straight into your HD TV. 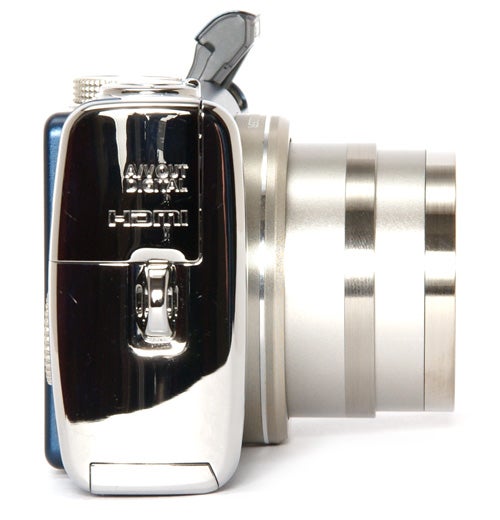 Where the SX200 IS scores over Panasonic’s model is on the main mode dial. The TZ7 is offers only automatic operation, but the SX200 has a full range of advanced exposure options, including aperture and shutter priority and well as full manual exposure. Settings are adjusted via the rotary bezel around the D-pad. Aperture settings up to f/8 and shutter speeds from 15 seconds to an impressive 1/3200th of a second are available, which offers a lot of creative control.

Another reliable characteristic of recent Canon cameras is exceptionally fast performance. Despite unfolding the flash and lens like some sort of proto-Transformer, the SX200 starts up in just over one and a half seconds, although it’s a bit slower to shut down again at just over two seconds. In single-shot mode it has a shot-to-shot time of approximately 2.6 seconds, which isn’t bad for a 12MP camera, while in continuous shooting mode it can manage an impressive one frame per second, although there is an AF continuous mode which is a little slower. 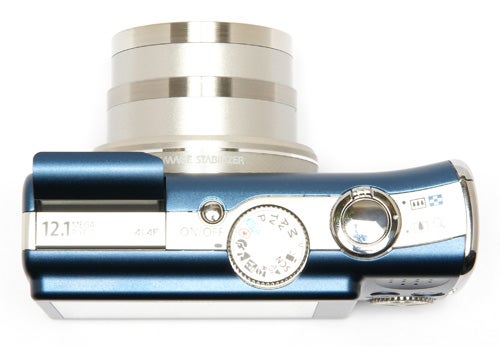 The autofocus system is also up to Canon’s usual high standard, focusing quickly and accurately even in very low light. The SX200 has a very powerful AF assist lamp with a range of several meters, and the long 15-second maximum exposure means it can take some good low light shots. However that trick flash is significantly underpowered, not really even matching up to its claimed range of three metres.


As I mentioned earlier the lens is superb, producing excellent sharpness and detail from corner to corner with virtually no wide-angle distortion or chromatic aberration. Exposure metering is generally accurate and colour reproduction is very natural, although the limited dynamic range of the small 1/2.3-inch sensor does result in some burned-out highlights and featureless shadows. The SX200 has Canon’s i-Contrast dynamic range booster, which helps to restore some shadow detail in high-contrast or backlighting situations, but it does have an impact on image quality.


The overcrowded sensor is also the reason for the SX200’s surprisingly poor high-ISO image noise performance. Images at 80-200 ISO are very good and effectively noise-free, but 400 ISO does show some noise and loss of detail, and the pixel-binned 1600 ISO maximum setting is only suitable for very small prints. 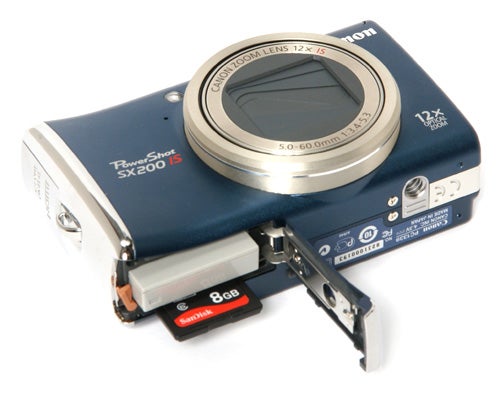 The PowerShot SX200 IS is a rare camera, a genuinely good all-rounder. It has an attractive modern design, good build quality, comfortable easy-to-use handling, a wide range of user options and full manual exposure control. It performs well in a wide range of situations, and produces generally good results. It’s just a pity it’s so expensive, and that the competition is so good.

”Over the next few pages we show a range of test shots. On this page the full size image at the minimum and maximum ISO settings have been reduced to let you see the full image, and a series of full resolution crops have taken from original images at a range of ISO settings to show the overall image quality. The pictures were taken outdoors in overcst daylight. ” 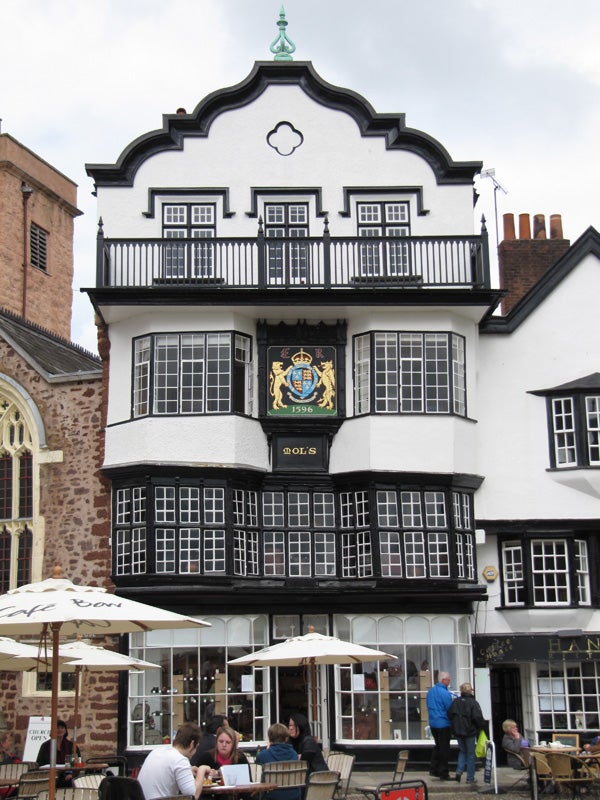 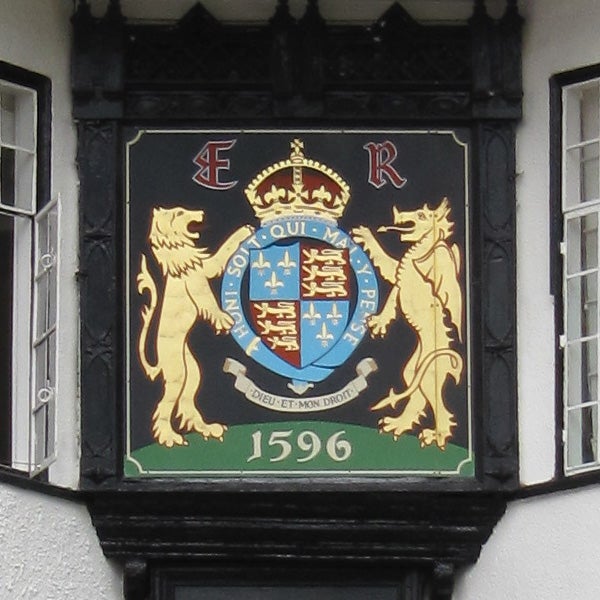 At 80 ISO the image quality is excellent, with lots of detail and no noise. 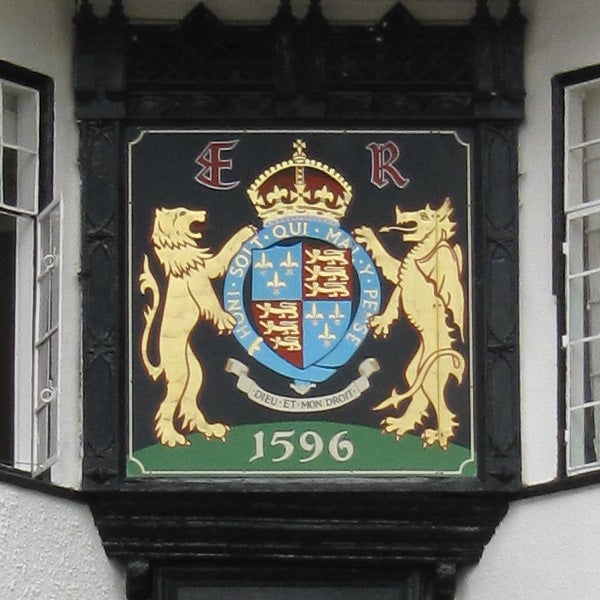 Pretty much the same results at 100 ISO. 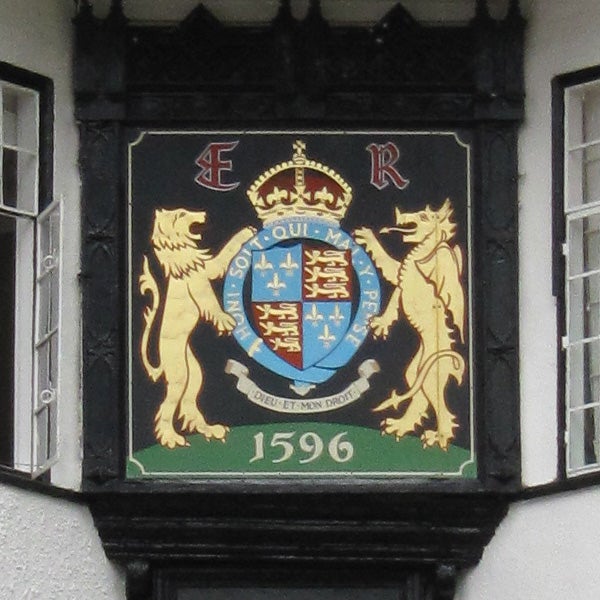 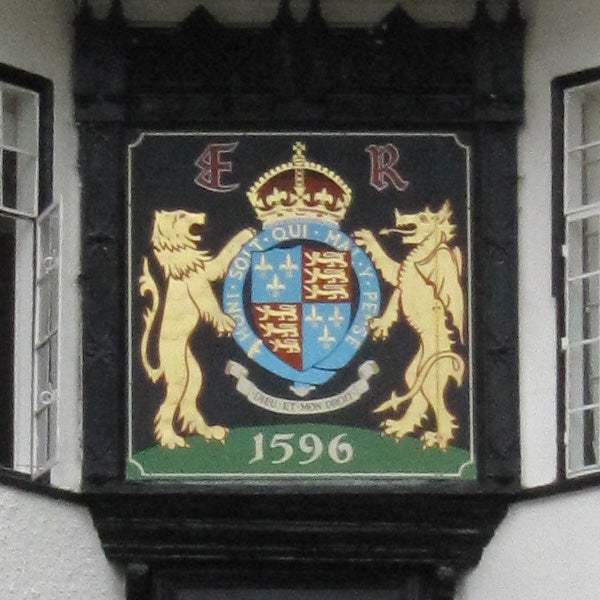 At 400 ISO there is visible noise in the mid-tone areas and some loss og detail to noise reduction. 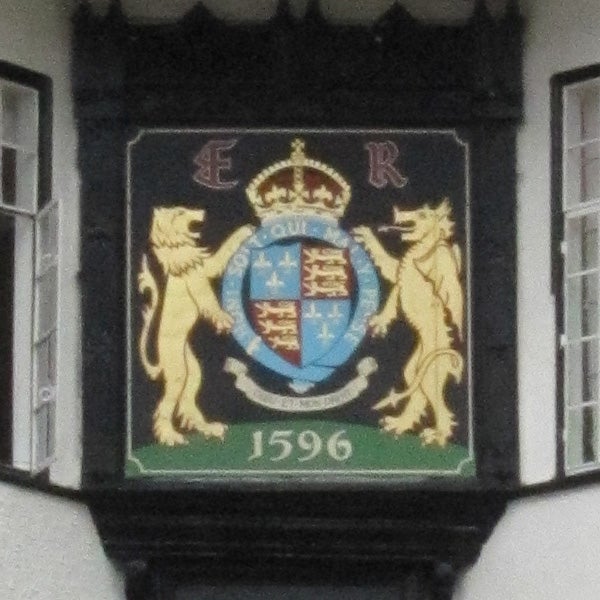 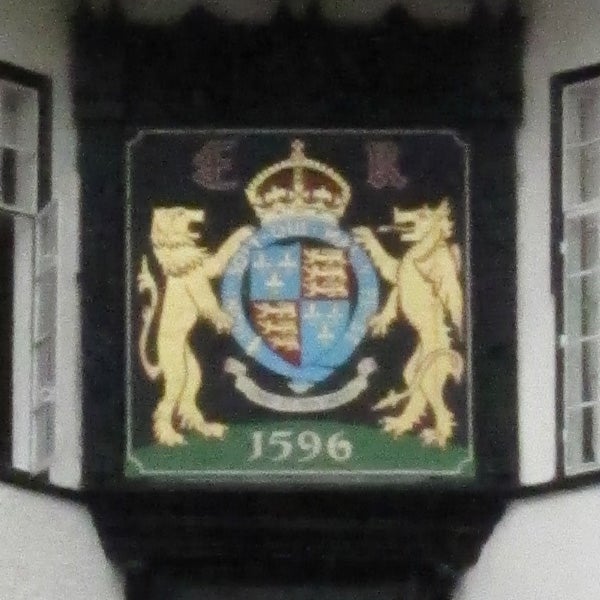 Image quality is very poor at the amximum 1600 ISO. 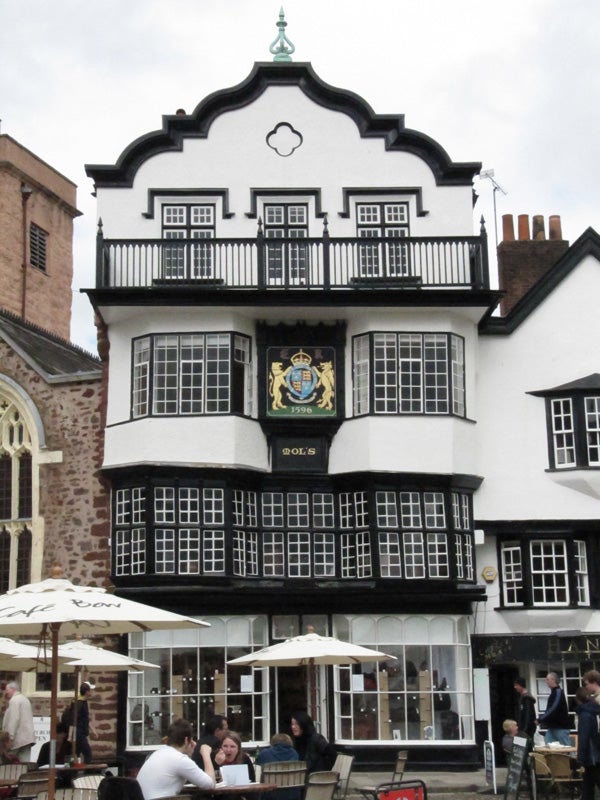 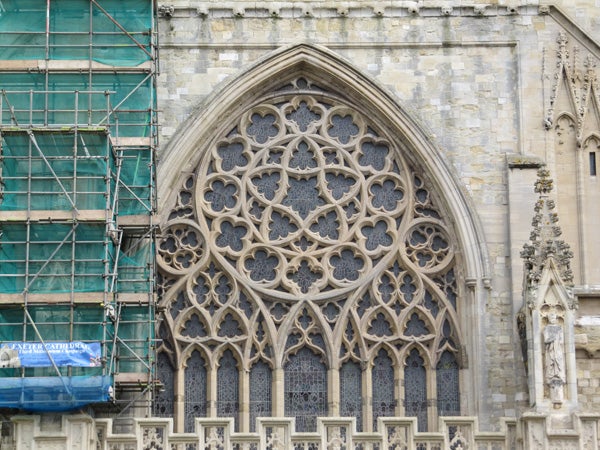 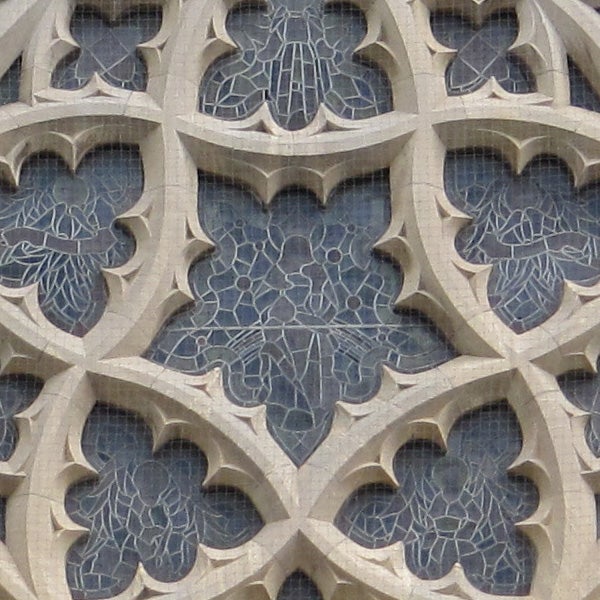 The pin-sharp lens and 12MP sensor give plenty of sharp fine detail. 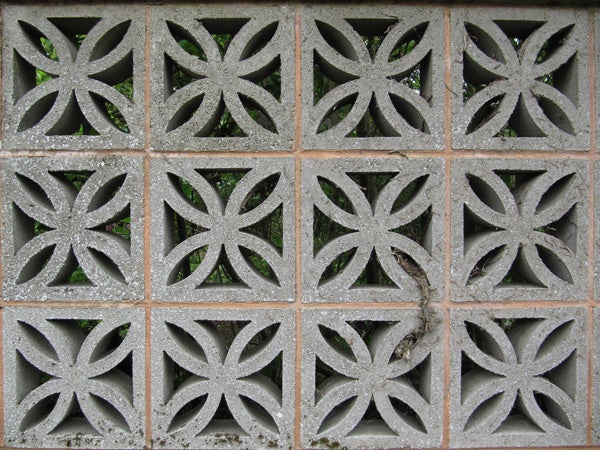 I don’t think this is the result of software distortion correction, I think the lens really is that good. 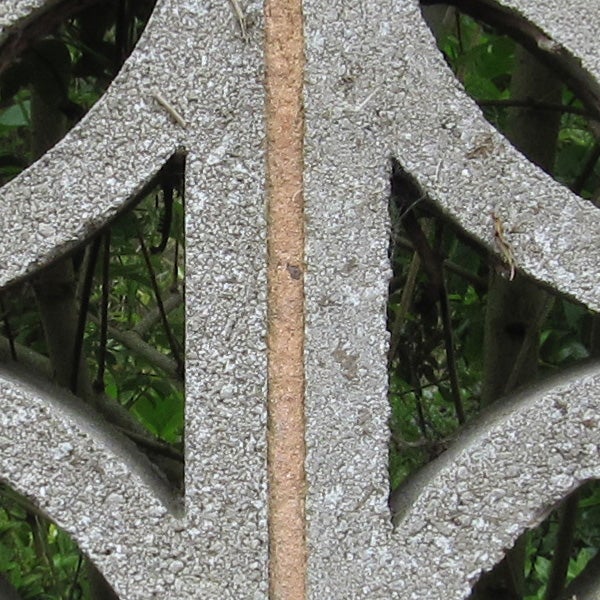 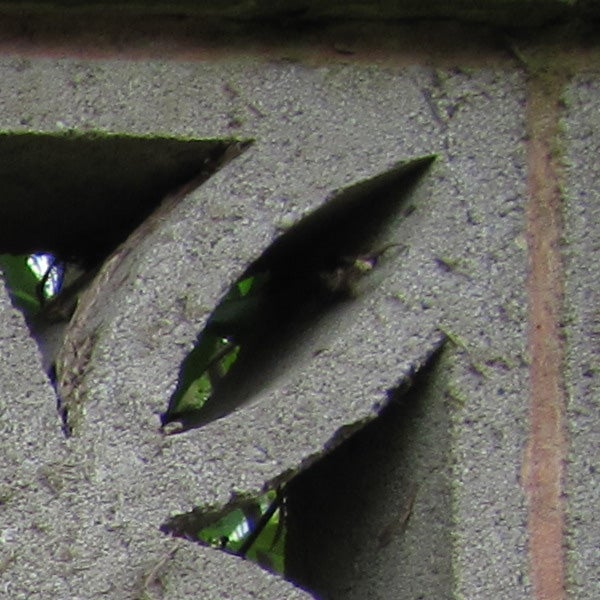 Corner sharpness is also very good, with barely a hint of chromatic aberration. 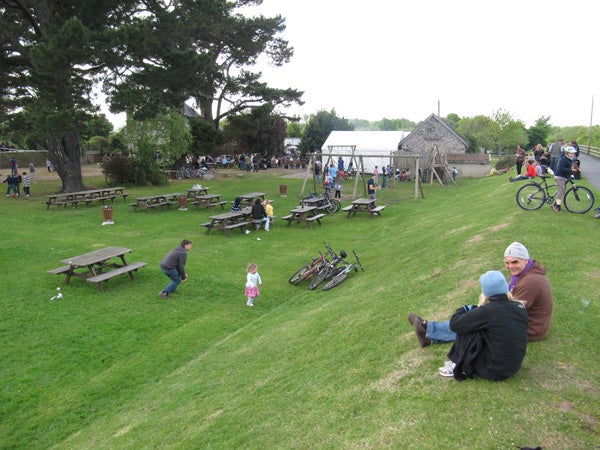 the wide-angle end is equivalent to 28mm, wide enough for any pub garden. 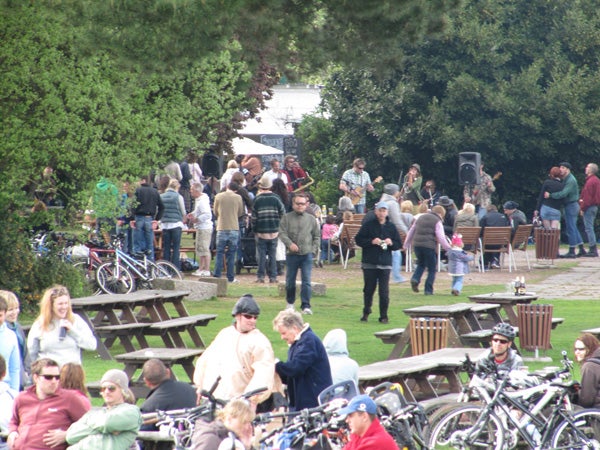 The telephoto end is equivalent to 336mm, good for distant details. This was shot hand-held at 1/40th of a second. 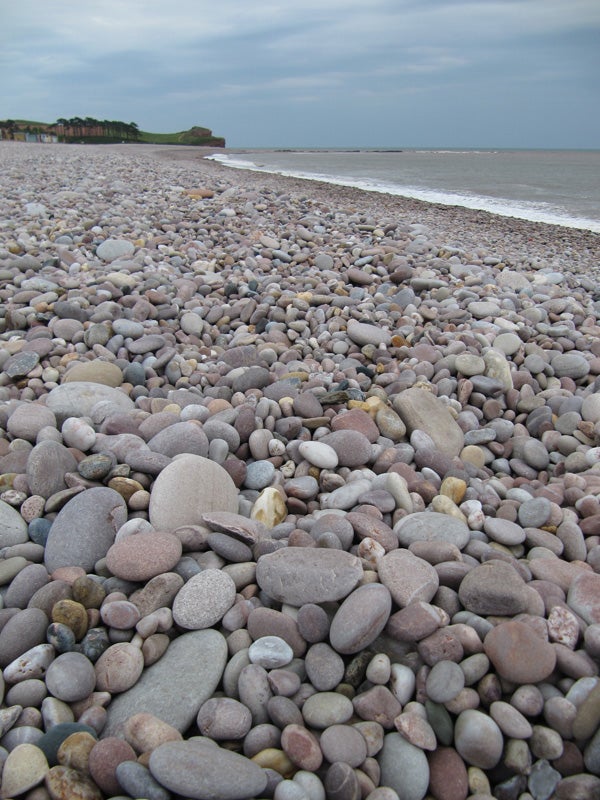 One of the beautiful sandy beaches of Devon.