There are some camera companies that make it easy to keep up with reviews of their new products, just launching on or two every few months, and then there’s Canon. Since I last reviewed a Canon camera, namely the excellent A540 about four months ago, the company has launched no fewer than eight new cameras, and the chances are that it’ll launch a whole load more just before Christmas. How the heck am I supposed to keep up? We could change the name of this site to TrustedCanonReviews and I’d still be working flat out to cover the whole range.


The only solution is to be selective, so I’ve picked the most interesting ones to take a look at. This week it’s the new PowerShot A710 IS, which is the flagship model for Canon’s mid-market A series. It has an impressive specification, featuring a 6x zoom lens, 2.5in LCD screen, 7.1 megapixels and optical image stabilisation. It also has an impressive price tag, with an RRP of £349.99, although it is available online for as little as £225.49 if you shop around. 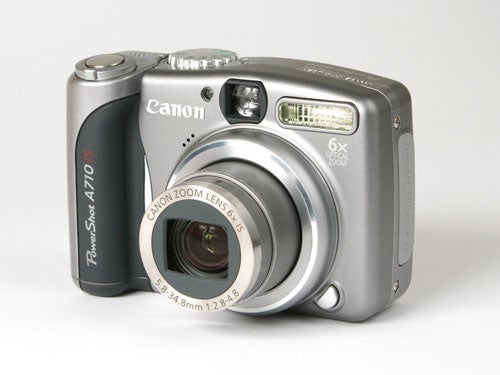 It’s certainly an impressive looking thing, bristling with enough buttons, dials and switches to satisfy even the most demanding gadget freak. It’s quite a large camera as compacts go, certainly too big for most pockets, and it’s heavy too. With a couple of standard AA batteries on board it tips the scales at over 250g. It must have a core of solid neutronium or something, because the case is made of plastic, and not particularly solid plastic either. There are a couple of places where the body flexes noticeably when pressed, which is not something I’d expect from a Canon.


However the overall impression is good, and the camera is solidly comfortable to hold and handle. The controls, while complex, are not confusing, and are logically laid out leaving plenty of room on the back for your thumb. 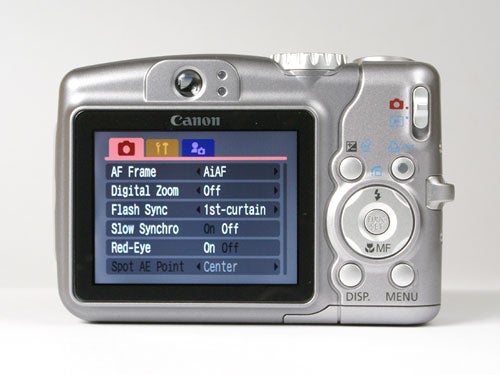 The main control is the big mode dial on the top plate, which has 11 settings including a full range of manual exposure options, as well as full auto, program auto, three scene programs (portrait, landscape and night scene) as well as a scene mode setting with 10 options. These include the usual selection of fireworks, snow, beach, night snapshot, kids & pets, indoor and foliage, but also include an underwater mode for use with the optional waterproof case, and a couple of special colour effect settings. The A710 also has a very good movie mode offering the now standard 640 x 480 at 30fps, as well as 320 x 240 at 60fps for capturing fast action. The zoom lens can also be used while filming.

Aside from the main dial, the most commonly used shooting features are accessed via an on-screen menu, and there are plenty to choose from. It has the longest list of colour options that I’ve ever seen, including options for lighter or darker skin tones, options to increase the saturation of each primary colour, as well as a manually customisable setting. Metering options include multi-zone, centre-weighted and spot, flash output can be manually adjusted, and the ISO settings range from 80 to 800. It also has a delay timer that can be manually set for up to 30 seconds and take multiple shots. 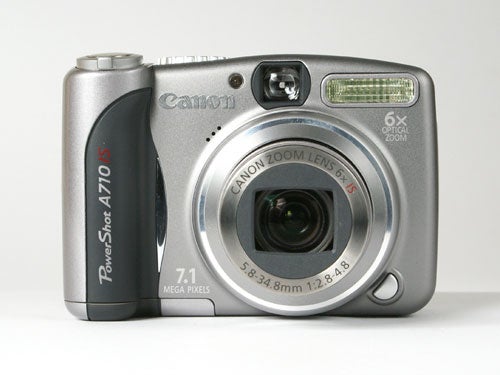 So it can do lots of clever tricks, but how well does it work? Pretty darned well actually, although it is not without its problems.


Overall performance is always a Canon strong suit, and the A710 doesn’t disappoint. It starts up in just over a second, which is very fast by any standard. The AF system is, as usual, superb, locking on almost instantly even in very low light conditions. The camera has an AF illuminator which I found worked extremely well at ranges as high as five metres, which is well beyond the nominal flash range.


The A710’s continuous shooting performance was simply extraordinary. Even in Superfine quality mode and maximum resolution it was able to shoot at approximately two frames per second, and keep that rate up until the memory card was full. I thought that maybe the high-speed SanDisk Extreme III SD card I was using was helping, but I got the same result with an older, slower card. I can’t think of another compact I’ve seen that can match that performance. 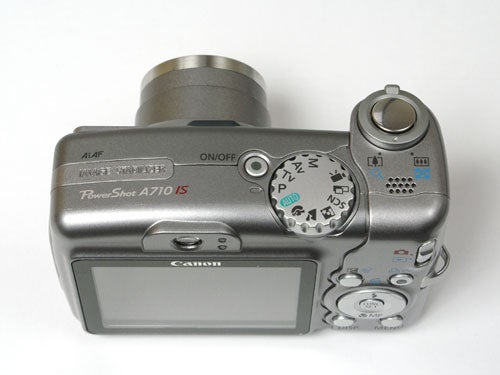 Of course the big selling point for the A710 IS would be the IS bit, which stands for Image Stabilisation. Canon uses a moving-lens IS system, rather than the moving-sensor or purely electronic systems used by many other manufacturers, and it performs exceptionally well. I found I was able to take hand-held shots at shutter speeds as low as 1/10th of a second at wide angle or 1/60th at full zoom with virtually no movement blur, which is very impressive. This gives about three stops of extra low-light hand-held shooting.

As I mentioned however, the A710 does have a couple of problems. The first is battery life. Using the supplied high-powered alkaline batteries I was only able to take 130 shots, using the flash on about a dozen of them, before the battery indicator started flashing red at me and demanding to be fed. Using higher capacity batteries, such as the Energizer Lithium Technology ones that I usually recommend, may improve this but it’s still a concern. 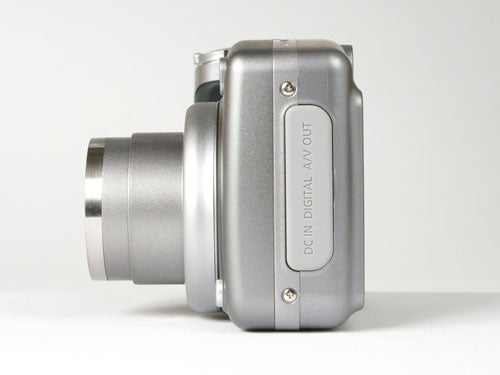 The other problem is more serious. The A710 has a fairly large built-in flash, which supposedly has a range of 3.5m at wide angle, however I found that it only fully illuminated a narrow strip across the middle of the frame, leaving the top and bottom of the picture in shadow. I find it hard to believe that a camera could pass through Canon’s usually excellent quality control procedures with such an obvious flaw, so it may be that this was just a fault on my review sample. I will try to get a replacement and double-check, so keep an eye on the forum for an update on this.


I hope it is just a one-off problem, because other than that the A710’s picture quality is very good, although not perfect. Colour rendition, exposure and focusing were all just as good as we’ve come to expect from Canon’s acclaimed Digic II imaging system, while image noise was virtually non-existent even at the 800 ISO maximum setting. 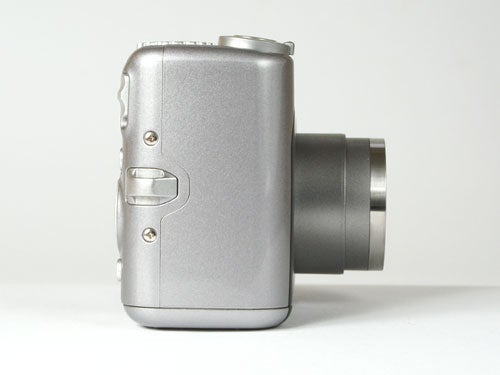 The lens performance however was not as good as I’d expected. Although spherical distortion was minimal, there was noticeable softness towards the edges at the wider settings, with even a hint of chromatic aberration in the corners. Even on more zoomed-in shots there was a distinct softness away from the centre of the frame. Considering the performance I’ve seen in other Canon lenses this is very disappointing.


The Canon PowerShot A710 IS is expensive for a compact camera, although it does offer a wide range of features for the money. Overall performance is outstanding, however build quality and more importantly image quality are not up to the standards we’ve come to expect from Canon, and the possible flash fault is damning. The latter may be an issue with our review sample, but as things stand, it’s a bit of a disappointment. 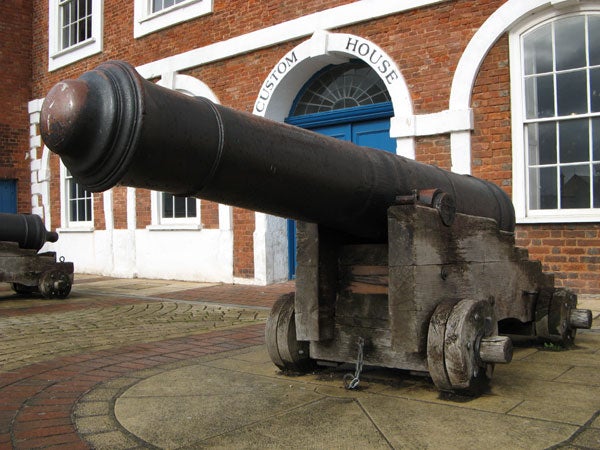 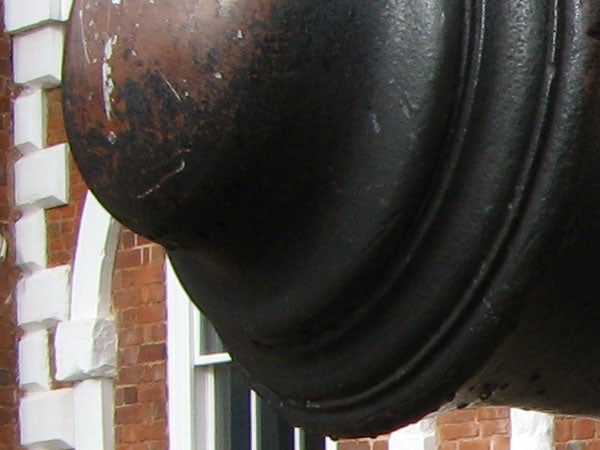 At the lowest sensitivity there is, predictably, no image noise at all. 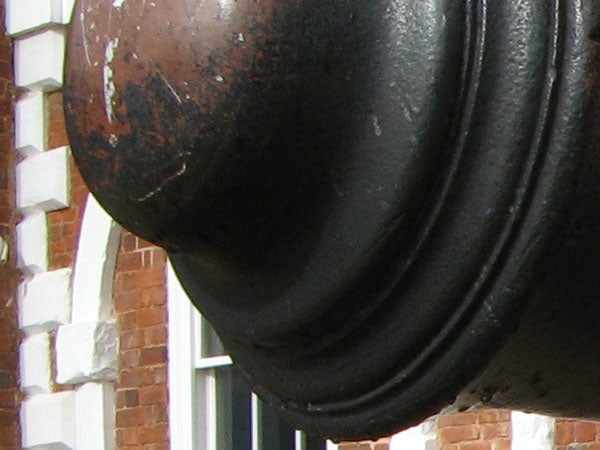 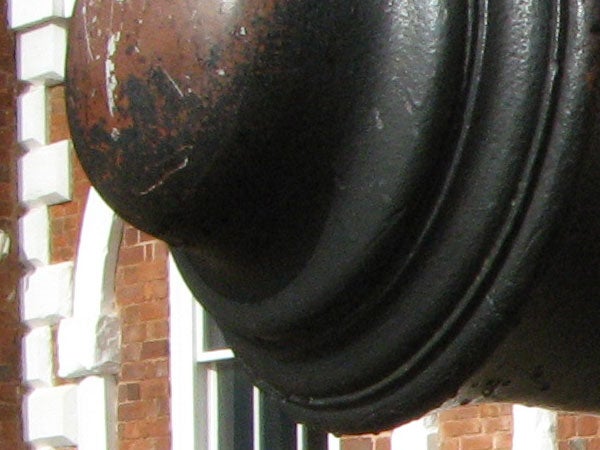 At 200 ISO some cameras would be starting to show noise, but the A710 remains silent. 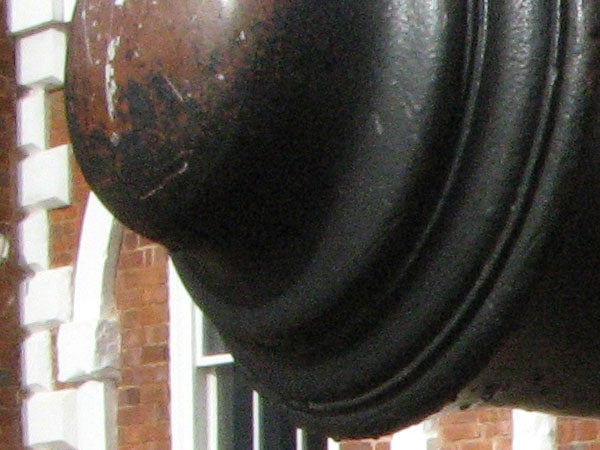 At 400 ISO there is some loss of detail as the noise reduction system does its job, but the picture quality is still excellent. 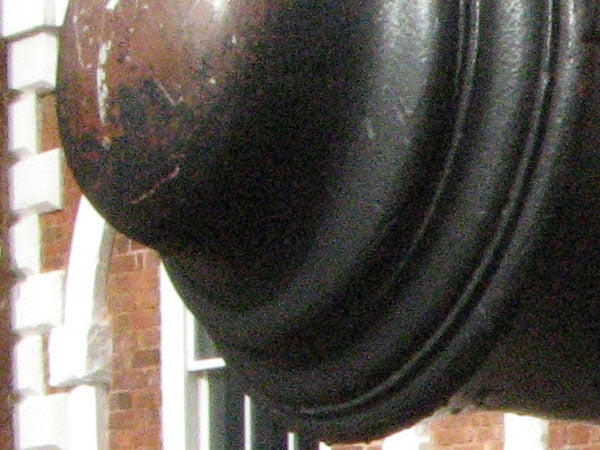 At the highest ISO setting there is some image noise, but it is very fine textured and doesn’t detract much from the overall quality. 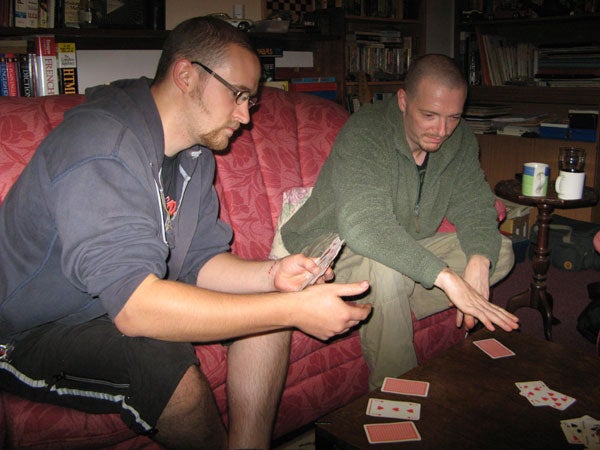 I found a big problem with the flash on my review sample. At wide angle it only illuminated a band in the centre of the frame, leaving the top and bottom in shadow. Hopefully this is not a common problem. 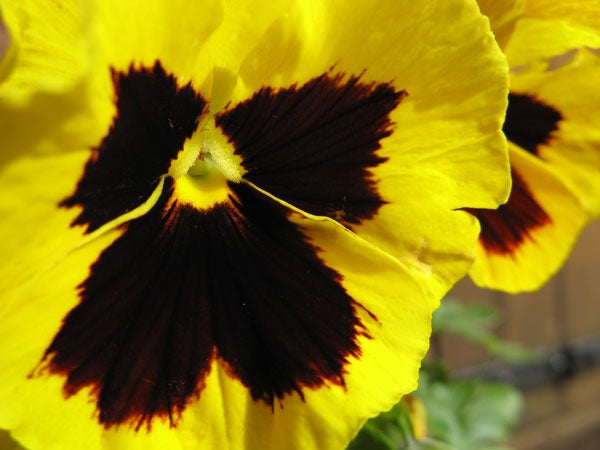 Macro performance was outstanding, focusing quickly and accurately on this flower at a range of about 3cm. The closest possible range is just 1cm. 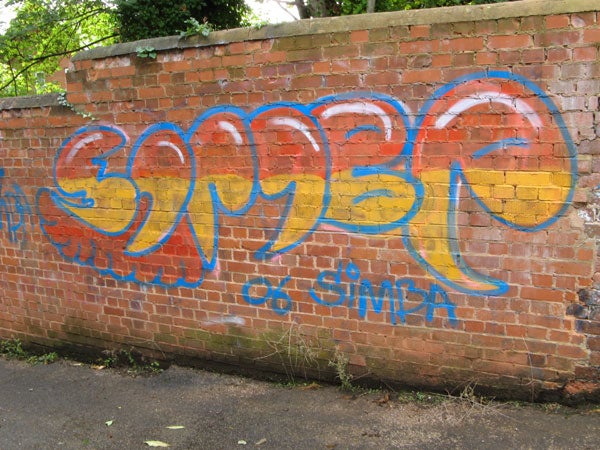 This shot was taken with the widest zoom setting hand-held at a shutter speed of 1/10th of a second. There is no trace of movement blur. 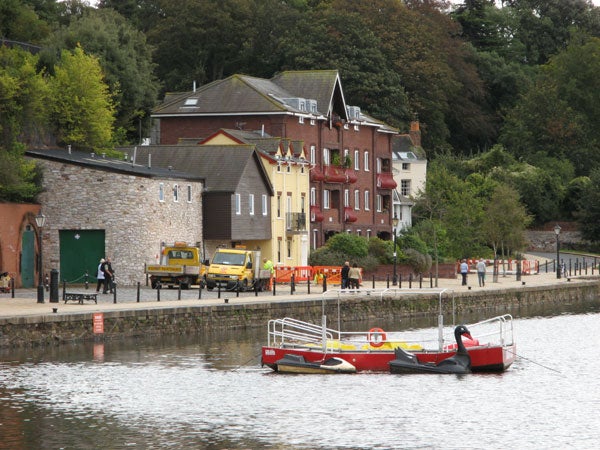 At the maximum telephoto setting this shot was taken hand-held at 1/60th of a second while standing on a rickety bridge. Again, no motion blur. 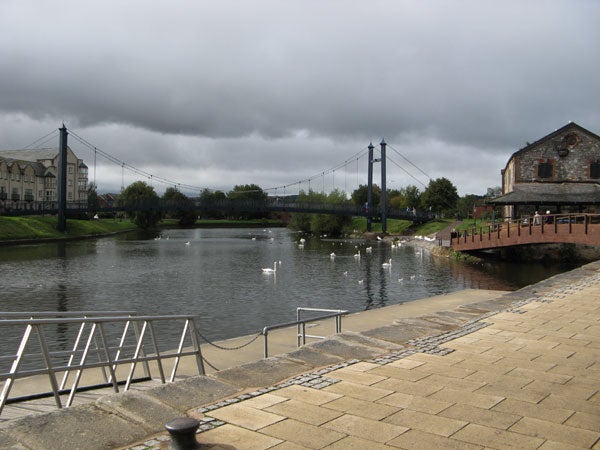 The wide-angle end of the zoom range is equivalent to 35mm, which is better than average for a compact. 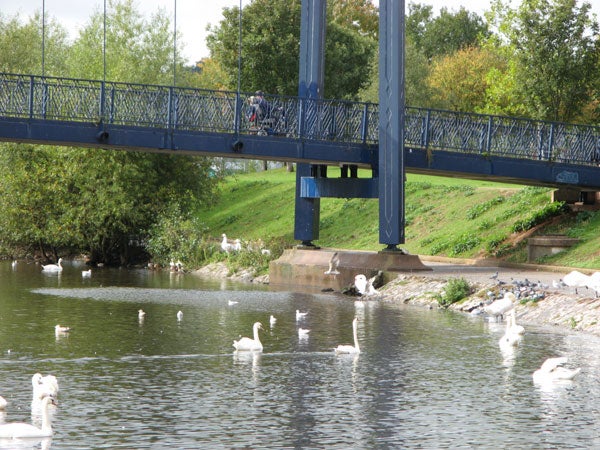 Taken from the same position as the shot above, this demonstrates the power of the telephoto end of the A710’s 6x zoom, equivalent to 210mm. 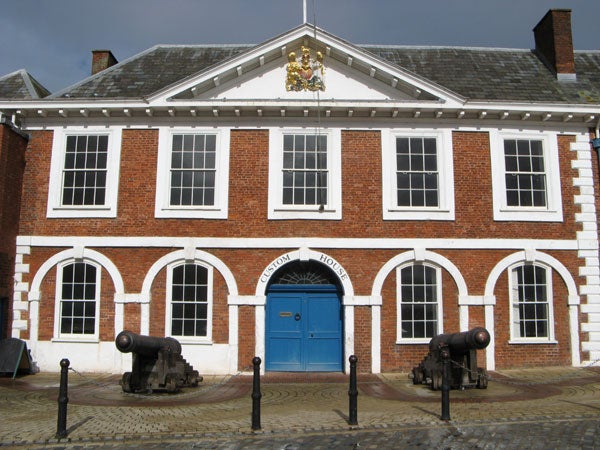 At the wide angle setting the usually excellent Canon lens produces some spherical distortion, but also edge softness and some chromatic aberration. 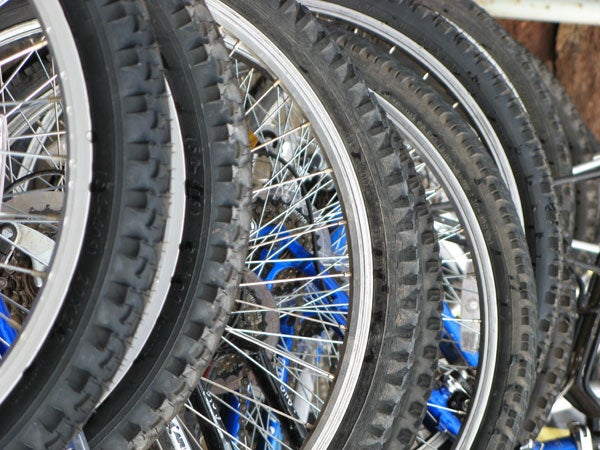 Although not without its problems, the A710 is capable of producing high levels of detail. See the 100% crop of this image below. This is a full-size crop from the image above, to demonstrate the level of detail produced by the A710.