For just over a year now, any time anyone has asked me to recommend a good low-cost mid-range camera with manual controls, I have unhesitatingly pointed them at the Canon PowerShot A540, which I reviewed here in May of last year. However my recommendation will be changing from now on, because Canon has recently replaced the deservedly popular A540 with this, the PowerShot A570 IS. 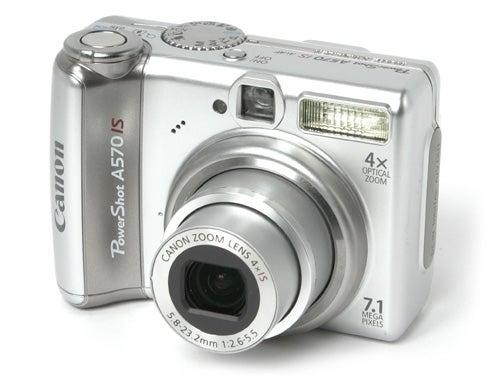 Actually to be more accurate, the A540 was replaced by the A560 which was also launched in February, a camera which is all but identical to the A570 IS, lacking only the optical image stabilisation system. However I think that the addition of Canon’s acclaimed IS technology to an already excellent camera design is sufficient to merit a recommendation.


I usually try to compare cameras with similar models from other manufacturers, so as to give you some idea of where it stands in the market and what the other alternatives are, however with Canon’s A-series cameras that’s rather difficult. If you want a medium-sized compact camera with a larger-than-average zoom lens, an optical viewfinder, a full range of manual exposure controls and a useful range of features and options then they really are the only game in town. Despite this virtual monopoly Canon has resisted the temptation to push up the prices. The A570 IS is available from around £180, which is a very good price for this specification. By comparison the non-IS A560 is around £150, which is actually cheaper than the final price of the A540. 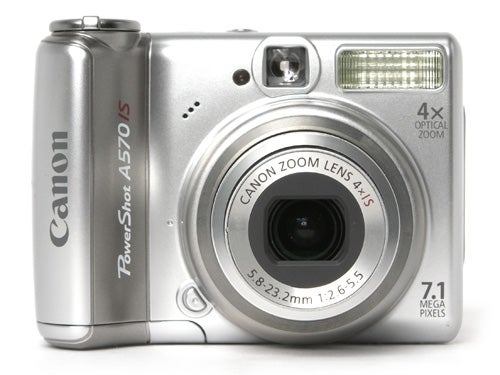 The A570 represents a significant advance on the specification of the A540. It has a 7.1-megapixel 1/2.5-in CCD sensor, a relatively fast f/2.6 – f/5.5 4x optical zoom lens equivalent to 35-140mm, a 2.5-in LCD monitor with 115K pixels, and Canon’s acclaimed Digic III image processor engine. It is almost the same size and shape as the A540, but at 89.5 x 64.3 x 42.8mm and 175g without batteries or card it is in fact 5g lighter and a couple of millimetres smaller. As with the other models in the A-series, the A570 runs on two AA batteries, so the total weight and the battery duration will vary depending on the type of cells used, although like other Digic III cameras I found the battery life to be very good.

Also in common with its other A-series stablemates, the A570 has a plastic body, but don’t let that put you off. It is extremely solidly made, with no creaking when squeezed, and the battery/card hatch has a metal hinge. However the shiny silver finish does mark quite easily so you would be well advised to buy some sort of soft case for it if you want to keep it looking pristine. Other than that the build quality and design is everything we’ve come to expect from Canon. The controls are solidly mounted, well positioned and easy to use, and even the rather crowded 13-position main mode dial on the top plate is fairly obvious. My only real complaint was that I found that the zoom control to be rather unresponsive. The zoom is stepped rather than continuous, with only seven positions between telephoto and wide angle, so accurate in-camera framing proved to be impossible. 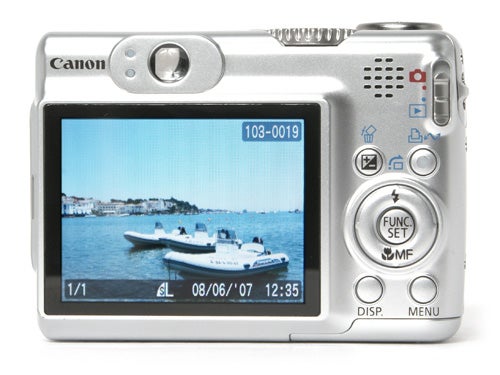 As usual with Canon cameras performance is excellent, although it is noticeably slower than the lightning-quick A540. The A570 starts up in under two seconds, and shuts down again in about the same time. The nine-point AiAF autofocus system is very quick, although as with some previous models I did find that it was sometimes inaccurate, locking on to background objects rather than the main foreground subject, especially when shooting very close-up subjects. However switching it to centre-point AF solved this problem, and if anything was even quicker. Low light focusing was also very good, and almost as fast as in normal light. The AF assist lamp has a range of around three metres, and the camera is capable of focusing even in complete darkness at this range. 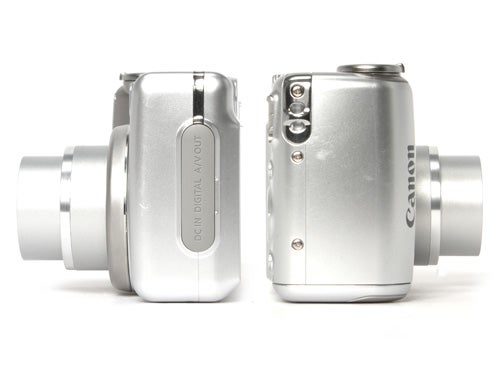 In continuous shooting mode the camera performed exceptionally well, shooting at a consistent two frames a second when using a good quality high-speed SD card (1GB SanDisk Extreme III), although using a slower budget-priced card did slow it down dramatically after only four shots. Again, while this is a very creditable performance it is a little slower than the A540.

The A570 has a very good selection of features. As well as the moving-lens optical image stabilisation system, which reliably provides an extra two stops of blur-free hand-held shooting at low shutter speeds, it has a full range of manual exposure options, including aperture and shutter priority as well as full manual. The aperture and shutter speeds are adjustable in 1/3-stop increments, which is ideal for precise exposure control, with an aperture range of f/2.8 to f/8.0 and a shutter speed range of 15 seconds to 1/2000th of a second. As well as the manual modes there is program mode, full auto and are five special scene program modes, as well as seven scene modes. Also on the menu are a number of special colour modes, adjustable flash power, three metering modes, selectable focus point, face detection and many more. The movie mode has a useful extra feature in the shape of a high-speed 60fps QVGA mode. The A570 has enough versatility for creative photography, and would be an ideal camera for anyone interested in learning more about the subject. 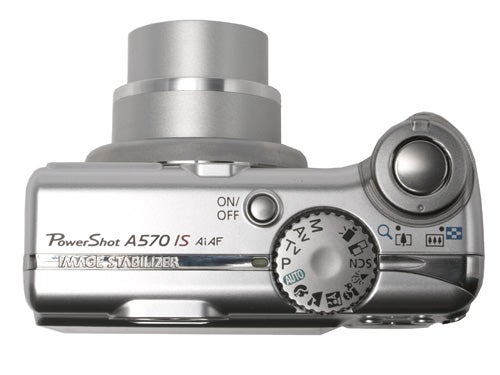 In terms of image quality, the A570 has many good points and one or two not so good. Exposure and colour rendition are first class as one might expect, and dynamic range is surprisingly good for a 1/2.5-in sensor. The overall level of detail is good, but the lens does produce noticeable spherical distortion at the wide end of the zoom range, and corner sharpness is surprisingly poor. Refreshingly there is no sign of purple fringing even on the brightest highlights. Image noise is very low at up to 200 ISO, reasonable at 400, but becomes a real problem at 800. The 1600 ISO maximum sensitivity, which is touted as a feature of this model, is pretty much useless. However as long as you bear this limitation in mind the PowerShot A570 IS is capable of turning in good results under varied lighting conditions, and will seldom disappoint. 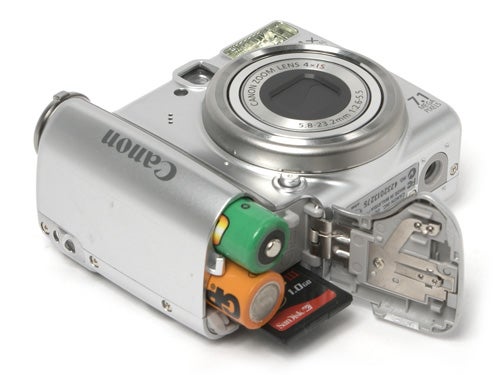 With the PowerShot A570 IS Canon continues what is arguably the best value series of mid-range enthusiast’s cameras on the market. Performance, build quality and design are up to Canon’s usual high standard, it has a wider range of features than anything else at its price point, and produces good results in a wide range of lighting conditions. It is an ideal camera for anyone keen to learn, and is capable of real creative photography. 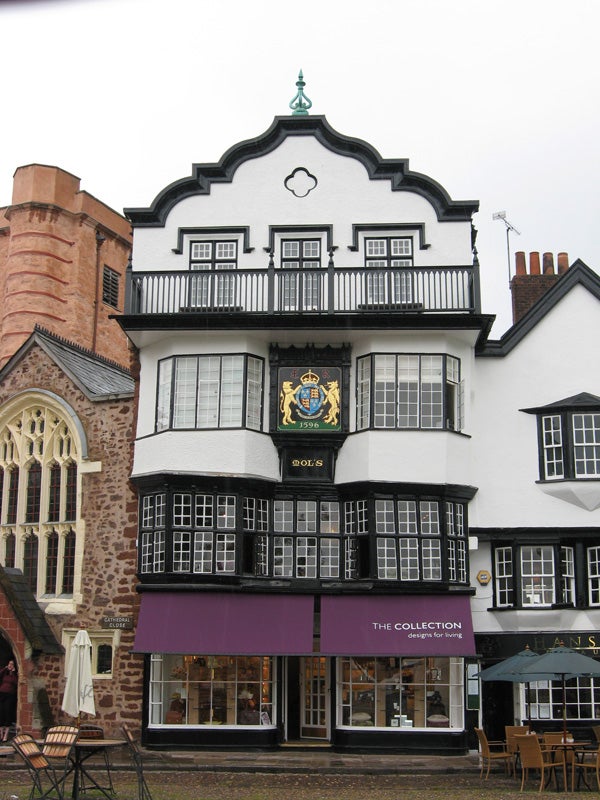 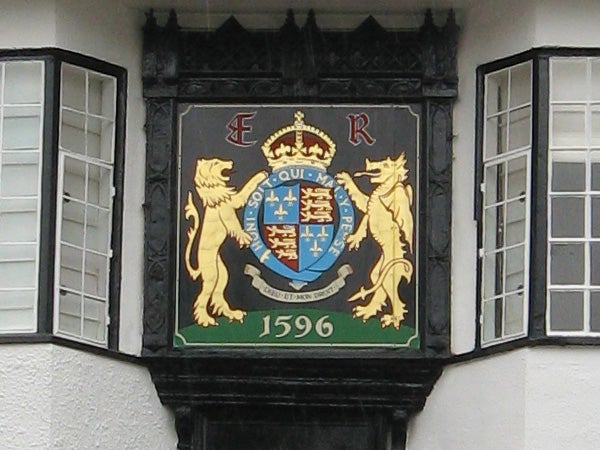 At the minimum 80 ISO the image is nice and clear, with excellent colour, contrast and detail. 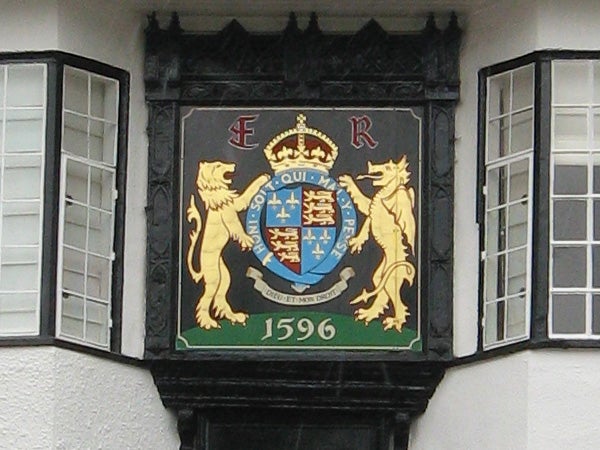 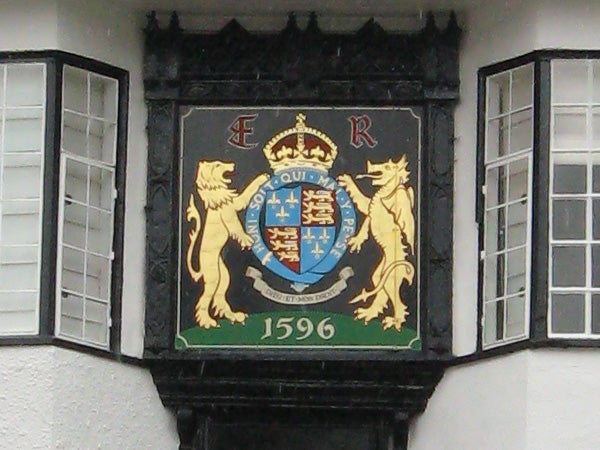 There is some slight colour speckling in the darker areas at 200 ISO, but detail is still good. 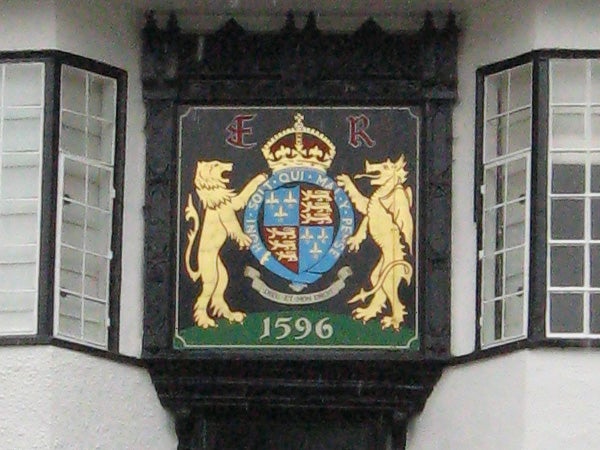 Noise is visible all across the image and 400 ISO, but overall detail is still quite good. 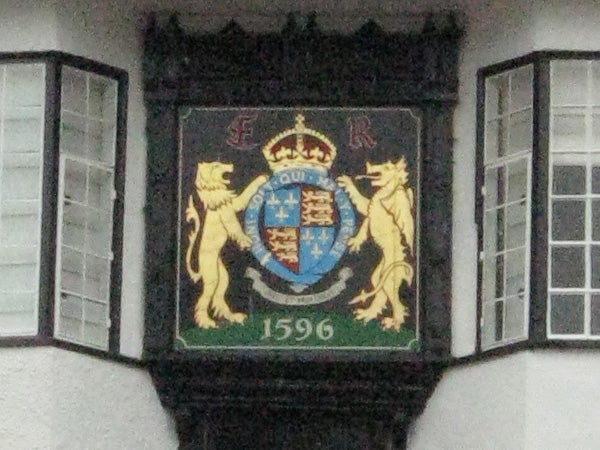 At 800 ISO there is a sudden drop off in image quality, and the noise level is now much worse. 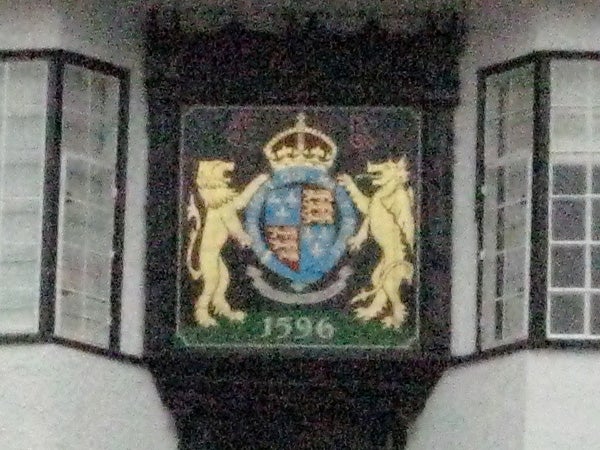 At 1600 ISO image quality is now very poor and the image would not make a good print even at snapshot size. 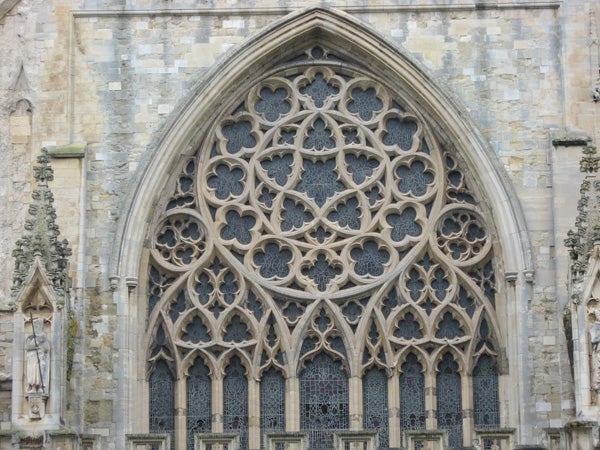 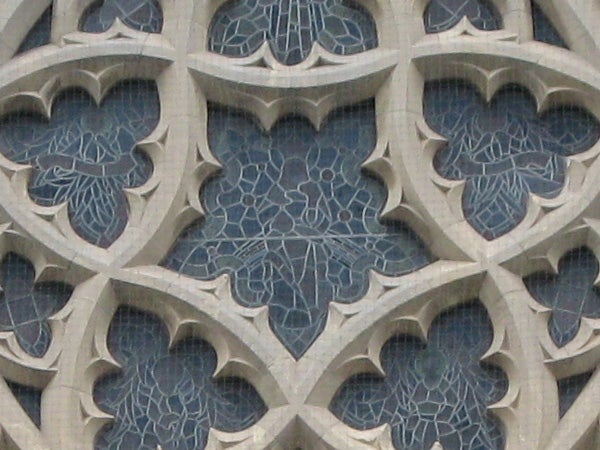 The level of detail and sharpness near the centre of the is very good, among the best for 7MP cameras. 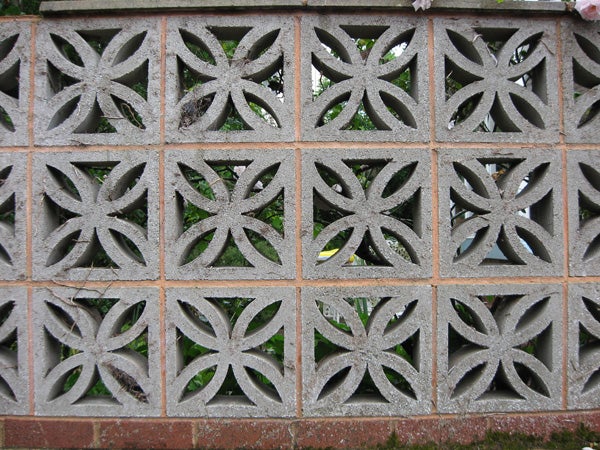 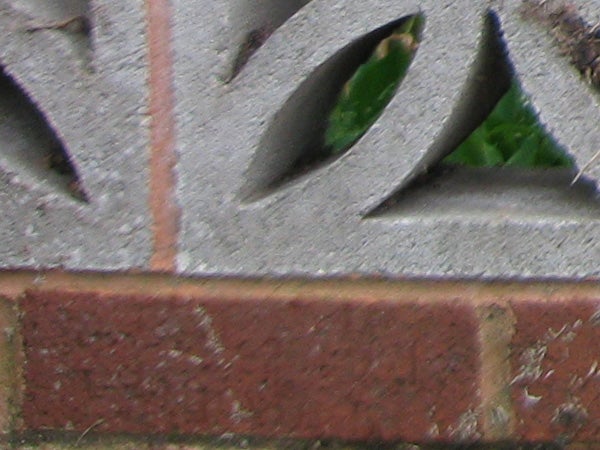 This is a corner crop from the above image, showing very poor corner blurring and distortion. 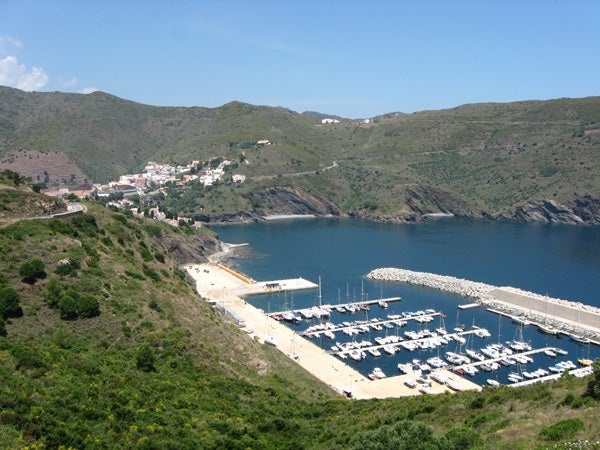 The 35mm-equivalent wide angle end is good for general landscapes. 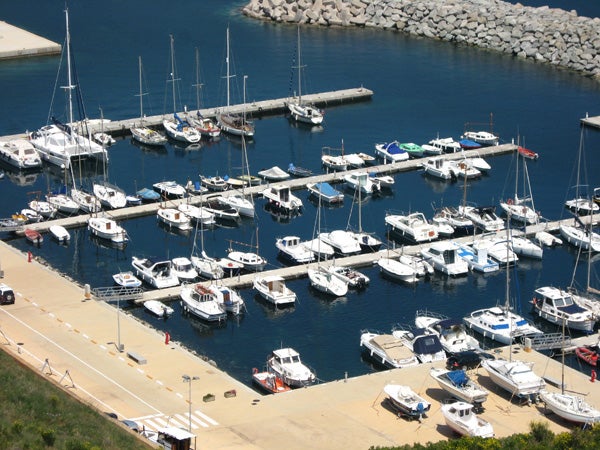 The telephoto end is equivalent to 135, a nice short telephoto and very good for portraits. 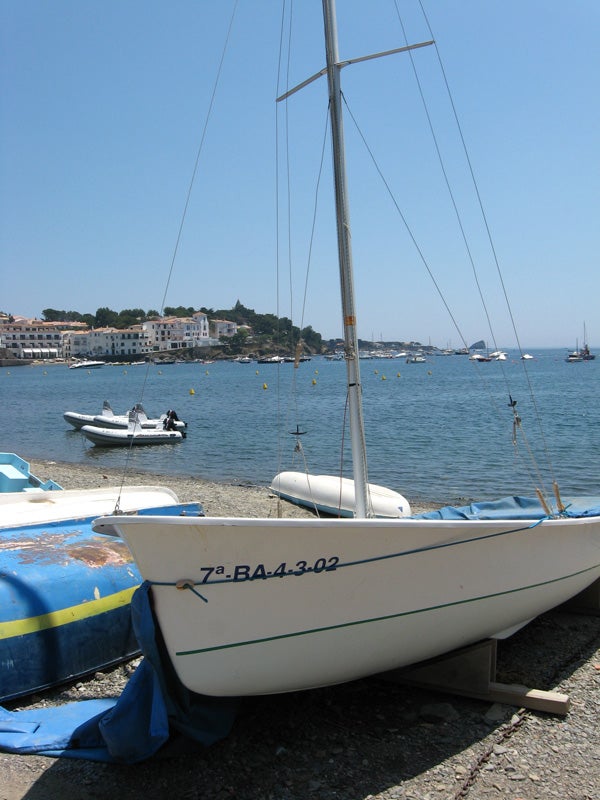 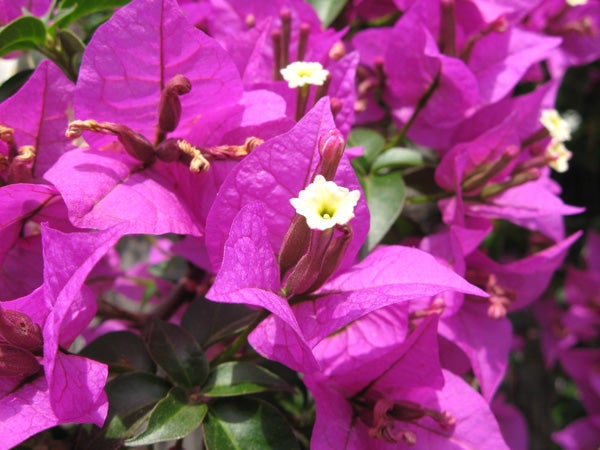 The colour rendition is superb in this 5cm macro shot.