Canon’s range of digital compact cameras currently consists of sixteen models, divided into three product lines. The S series is aimed at the serious power-user, while the IXUS series (SD series in the US) is targeted at the more style-conscious consumer. The seven models of A series make up the rest of the range, and cover the middle ground, for users who want simplicity and style, but also high quality and photographic versatility. There is enough variety among those seven cameras to satisfy most needs. 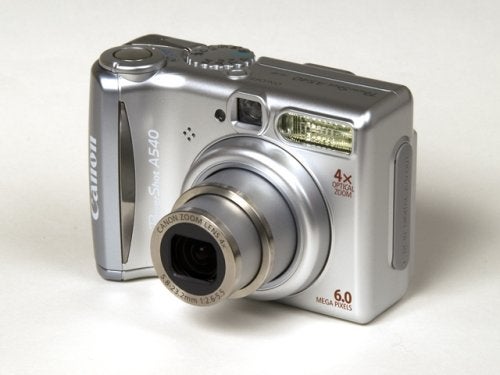 Launched in February this year as a replacement for the popular A520, the PowerShot A540 is one of five new cameras in Canon’s A series, and is the mid-range model of the bunch. It has a 6.0 megapixel CCD, 2.5 inch LCD, 4x optical zoom lens and a maximum ISO setting of 800. For the casual snapshot photographer it features a range of program and scene modes and an idiot-proof full-auto setting, while for the more adventurous user it has an optical viewfinder and a full range of manual controls. The recommended retail price is £289, which is a little on the high side for a camera in this class, but you can pick it up from Amazon for a mere £157, which makes it one of the least expensive 6MP cameras on the market.


You certainly get a lot of camera for your money. Although it has a plastic body, the A540 does nothing to sully Canon’s excellent reputation for design and build quality. It feels solid and sturdy, and the large clearly labelled controls all feel very solid and operate with a reassuringly positive click. 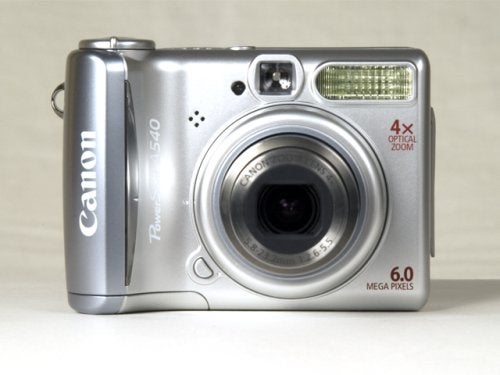 With its two AA batteries the camera weighs around 230g, which is a little above average for a pocket compact, and this combined with the comfortable sculpted handgrip give it a distinctly chunky feel. The overall shape is square and businesslike, and you get the impression that it’s been designed for usability rather than style or size. It’s not exactly ugly, but I think it’s fair to say that the A540 is going to end up in a lot more men’s coat pockets than in lady’s handbags.

The A540 has a lot of very useful features, including aperture priority with a range of F2.6 to F8.0, shutter priority with a range of 15 secs to 1/2000th, and full manual exposure, all of which are very simple to use. Also available are auto, portrait, landscape and night shooting program modes. It has stitch assist for composite panoramas, and a good movie mode capable of shooting at 640 x 480 resolution at 30 frames per second. 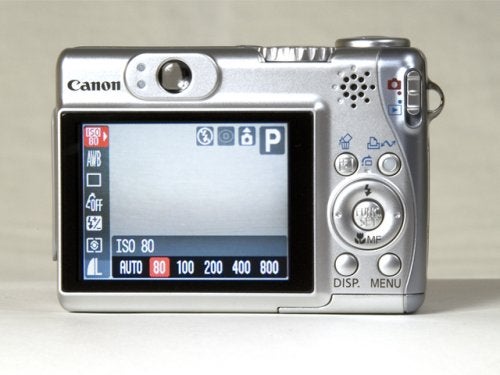 The manual focus option is nicely implemented, with the centre section of the monitor display magnified and a range indicator along the top of the frame. Unfortunately, although the monitor is quite large, its resolution is only 85,000 pixels, which makes it difficult to accurately judge when the picture is sharp.


Also on the menu is a range of colour adjustments, including presets for vivid colour, neutral colour, sepia, positive film, lighter and darker skin tones, as well as a custom colour setting with manual adjustments for contrast, sharpness, saturation, colour balance and skin tone.


The A540 can accept a number of optional adapter lenses via a bayonet mount hidden under the removable lens bezel, and a waterproof case is also available.

There are some features found on higher end Canon models that are notable by their absence though, such as an adjustable focus point, adjustable flash level, slow sync flash and an interval timer, although it does have a self timer with a manually adjustable delay. 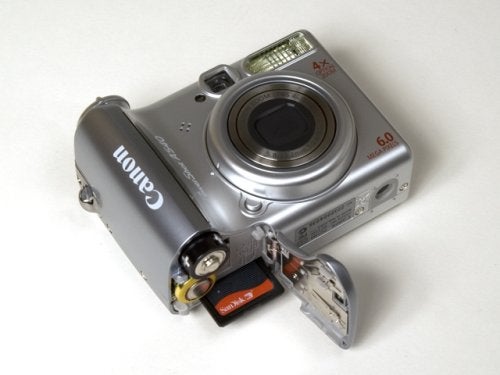 One thing that I really must mention is the manual, or rather the lack of it. All you get in the box is a 23-page basic guide, enough to make sure you don’t accidentally set the camera on fire or fill it with warm soapy water by mistake. The full 139-page manual is included on CD-ROM as a PDF file. Canon and a few other companies do this to save money, since manuals in a number of languages can be included on the same disk, but it really does a disservice to the user. If you’re out shooting with your A540, which is after all a fairly complex camera, and you need to look something up in the manual, what are you supposed to do? Carry a laptop around with you? I suppose you could print the manual out yourself, but spending £15 on printer ink just to save Canon a few pence in printing costs seems like a bit of a swizz to me.

Anyway, enough with the rant, lets get back to the good stuff. Like most Canon cameras, the A540 has exceptionally good performance. Start-up time is particularly quick at under a second, especially considering the larger than average zoom lens that has to be extended. The multi-zone Ai-AF system is one of the fastest around, taking under half a second to focus even in low light.


In continuous shooting mode the A540 maintains an impressive 2.3 frames per second until the memory card is full, or the batteries run out. A 1GB SD card provides enough space for 601 shots at maximum quality and size, or 8’ 31” of video shooting at 640/30.


Since it runs on two AA cells, battery duration will depend on the type and quality of the batteries used, but Canon claims a fairly conservative 90 shots with standard alkalines. I say conservative because I was able to take over 130 shots, many using the flash, with the pair of ordinary alkaline batteries supplied with the camera. Nonetheless, with some lithium-ion powered cameras now capable of over 400 shots on a single charge, the A540 does begin to look a bit power-hungry. If you’re planning to take it on holiday then a couple of sets of Ni-MH rechargeables and a rapid charger would be a sensible investment.


Finally we come to picture quality, and here the A540 really shines. Canon’s DIGIC II image processor is arguably the best on the market, and produces perfect exposure and colour reproduction time after time. I was a little disappointed by the noise levels at 800 ISO, however at 400 ISO the image quality was much improved.


The lens on the A540 is also very good, although I noticed some slight softness in the corners at wider aperture settings, and at wide angle it does produce very noticeable barrel distortion. However the camera is versatile enough to work around these minor problems, and is certainly capable of producing excellent results.


The A450 is a very capable camera and good value for money, and would make an excellent choice for anyone who wants to learn more about photography before moving on to a semi-pro zoom or DSLR. It may lack some features found on higher end models, but it is a good all rounder and produces top quality results. 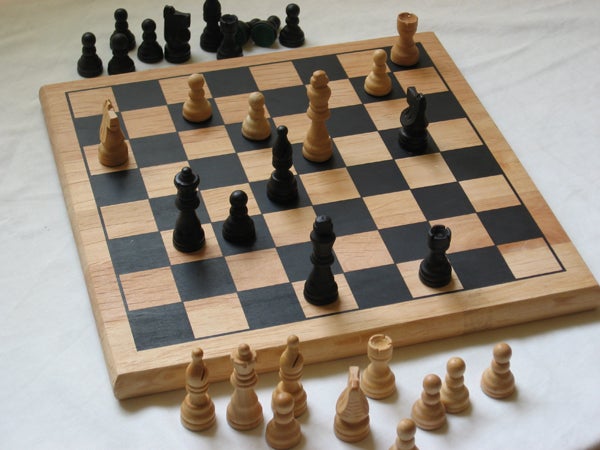 At the lowest ISO setting the image is smooth as silk, with perfect exposure and colour rendition. Unsurprisingly at this setting there is no image noise. 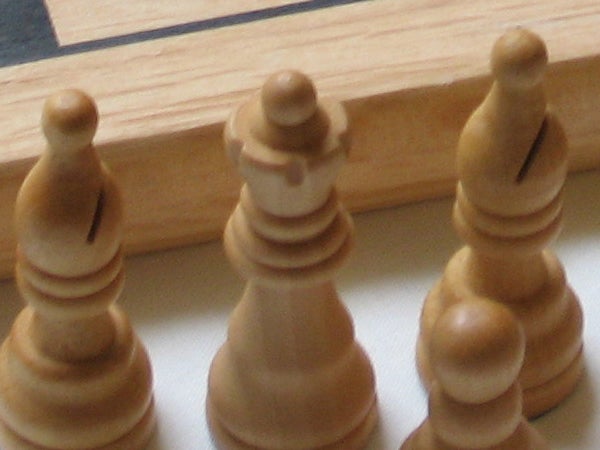 There is no visible difference between this 100 ISO shot and the previous one. 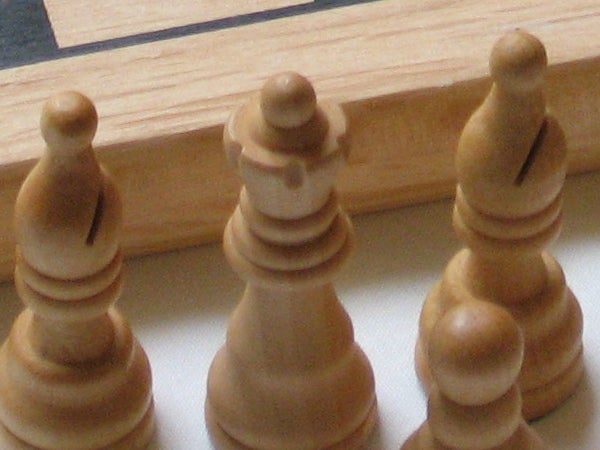 At 200 ISO there is a tiny amount of colour speckling in the darker areas, but there is still plenty of detail and the overall colour rendition remains accurate. 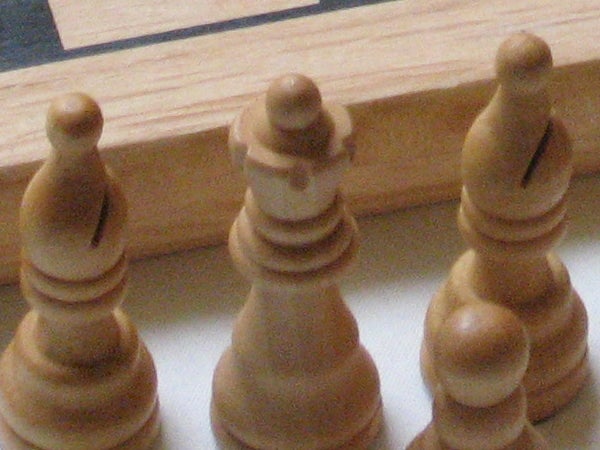 There is little difference between this 400 ISO shot and the 200 ISO version. The colour speckling is a little more pronounced, but noise is well controlled and the picture is quite printable. 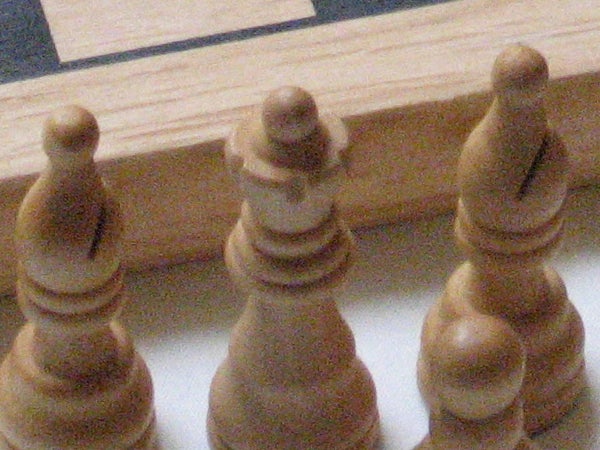 At the highest ISO setting the image is now quite noisy and would not make a good print, although the overall colour balance is still quite accurate. This is about as good as most other cameras on 400 ISO. 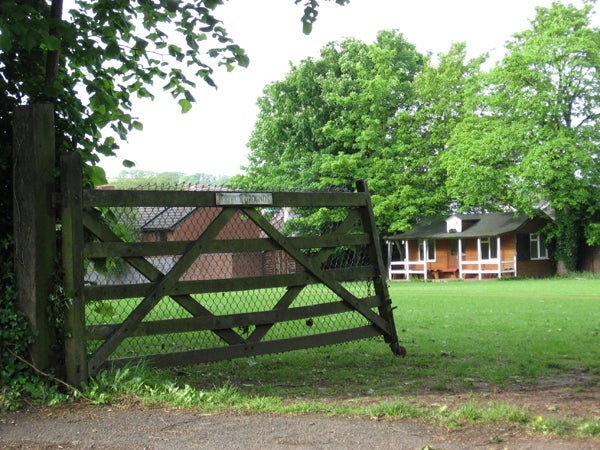 The multi-zone evaluative metering has coped well with the wide tonal range of this shot, although there is some blue fringing around the leaves against the over-exposed sky. 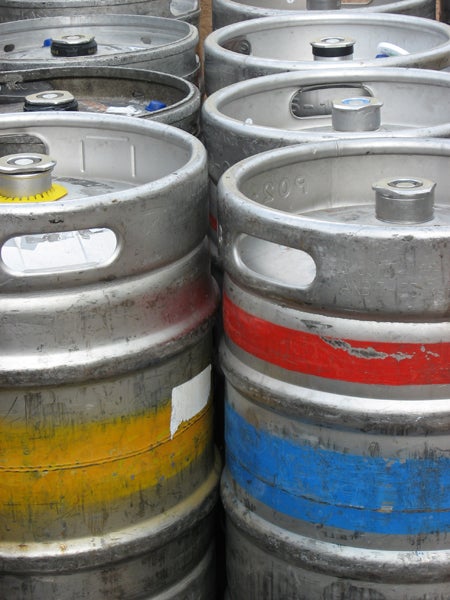 The 4x zoom lens gives greater versatility for framing your shot, but with only seven steps between the widest and longest settings it lacks fine control. 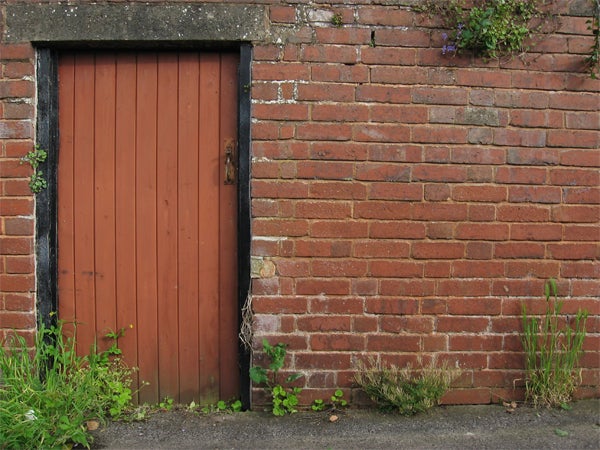 At the widest end of the zoom range the A540’s lens does produce significant barrel distortion, and at F4 there is some softness in the corners of the frame. 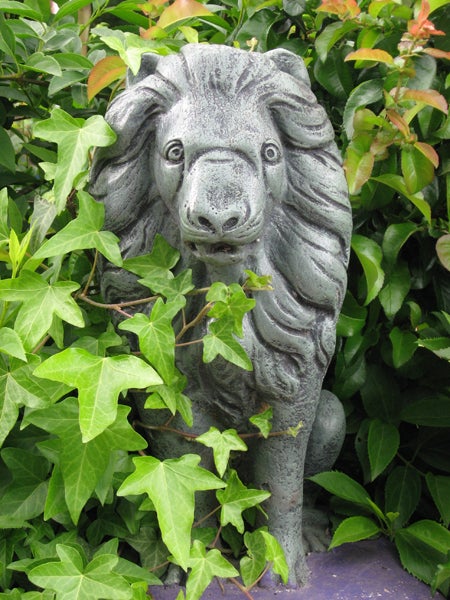 The A540’s fast start-up and focusing are essential for capturing spur-of-the-moment wildlife shots. You don’t want to be hanging around with a dangerous animal like this on the loose. 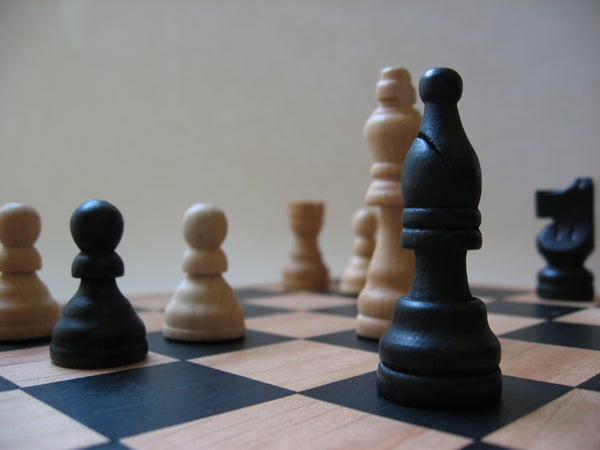 The minimum focusing distance isn’t stated in the specification list, but it appears to be about 5cm. 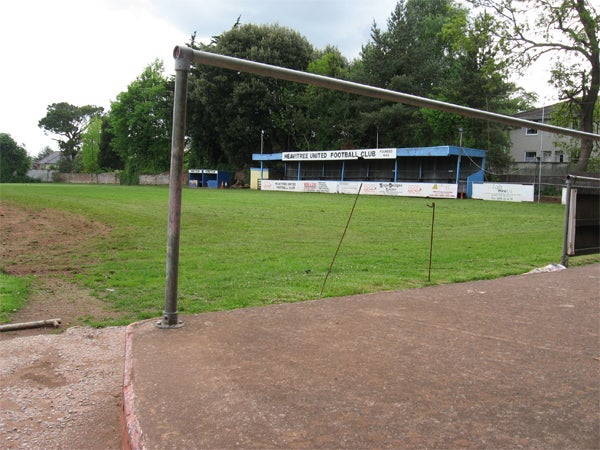 The wide end of the zoom range is equivalent to 35mm, which is wider than some, and is good for general purpose photography. 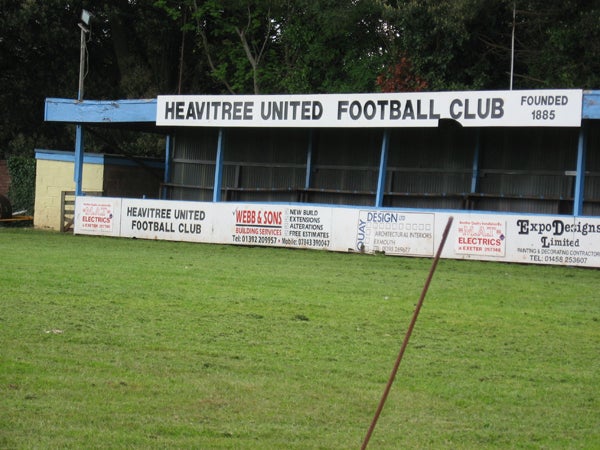 The 140mm-equivalent telephoto end allows you to get even closer to what is very probably the worst football stadium in the entire world.