A few years ago, Canon’s PowerShot A-series of compact cameras used to be very popular with hobby photographers and were designed with that audience in mind, with robust construction, comfortable handling, optical viewfinders and manual exposure controls. These days however most of those hobby photographers have graduated to a Canon G11 or S90, or moved on to a now-affordable digital SLR. It seems there just isn’t much demand for cheap but versatile manual compacts any more, and so the venerable A-series has been reduced to a handful of low-cost compacts aimed at the point-and-shoot end of the consumer market. Only the A1100 IS still has an optical viewfinder, and none of them have manual exposure controls. 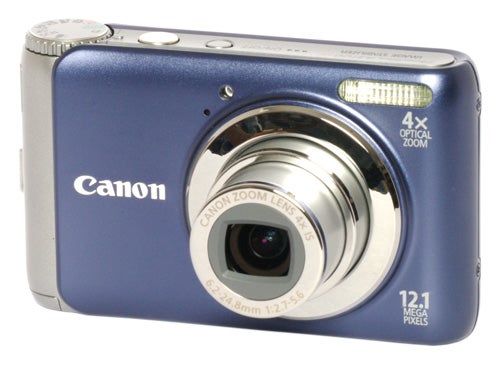 The current top model of the A-series is this PowerShot A3100 IS, a 12.1-megapixel compact featuring a 4x zoom lens, 2.7-inch monitor and optical image stabilisation. It’s a pretty basic camera, and about as close to average as anything on the market. The body is made of plastic, and is available in red, silver or the blue version seen here. Unlike previous AA-powered A-series models it has a rechargeable lithium-ion battery, and as a result it’s a lot lighter and more compact than most of the earlier designs, measuring 97.2 x 58.2 x 28.1mm and weighing 155g including battery and memory card. 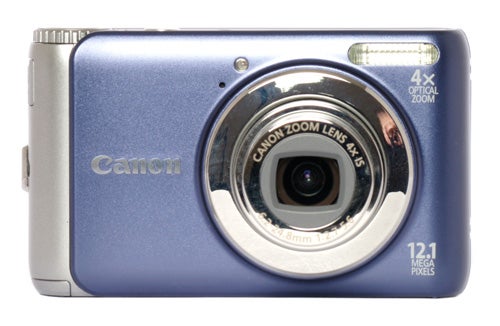 The overall build quality is good, with a tight fit between panels and no embarrassing creaks when squeezed. The semi-matt finish is attractive, easy to grip and resists scratches well. The battery hatch is a bit flimsy, with a plastic hinge and a tendency to pop open with little provocation, but at least the tripod bush is metal. The shape of the body includes a slight flare on the right hand end which provides a reasonably firm and comfortable grip, and the controls are large, well laid out and very clearly labelled. I wouldn’t go as far as recommending it for anyone with limited eyesight or manual dexterity, but it’s a lot less fiddly than most ultra-compacts.

The monitor screen is nice and bright, and with a resolution of 230k dots it is sharp enough, but it lacks Canon’s usual excellent anti-glare surface and does become quite hard to see in bright sunlight. The angle of view is excellent in all directions except downwards, which unfortunately means that if you hold the camera over your head to shoot over a crowd the colour inverts and the monitor image becomes very difficult to see. 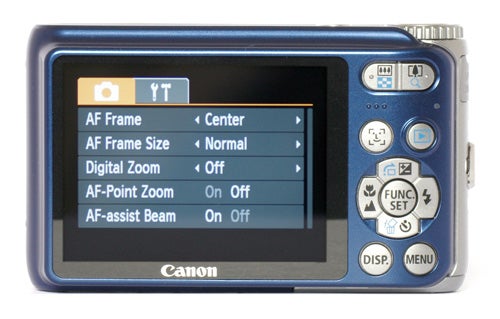 The 4x zoom lens has a focal length range equivalent to 35-140mm, which isn’t as wide-angled as most current snapshot cameras, but does provide a good range for general photography. The maximum aperture of f/2.7 – f/5.6 is a little faster than average but not enough to provide any real advantage. The lens barrel is plastic and does feel a bit vulnerable when extended to its maximum length of nearly 4cm, but it does fold away almost flush with the camera body when not in use.


The A3100 IS is a point-and-shoot snapshot camera with a rather sparse range of features, but it does offer a little creativity. The main shooting modes are Program Auto with a full range of menu options, Full Auto in which only image size, flash mode and self-timer can be selected, and Easy Auto, in which everything is done automatically with no menu options available at all, however if you need this setting you probably shouldn’t have bought a camera with anything as complex as actual buttons on it. In Program mode shooting options include evaluative, centre-weighted and spot metering, and the autofocus system offers a choice between centre-zone or the somewhat unpredictable Face AiAF “intelligent” mode. 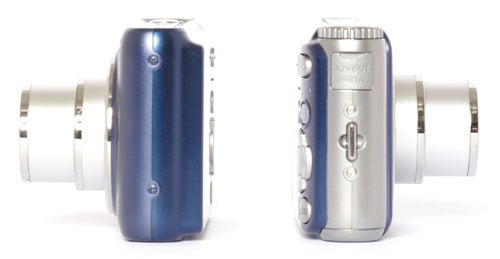 Other creative options include a limited range of colour settings with vivid, natural, sepia, monochrome and a custom mode with adjustable RGB balance. There are also a few options in playback mode, including cropping, resizing, rotating, red-eye correction and a few slideshow options.


The video recording mode is a bit basic by recent standards, with a maximum resolution of 640 x 480 at 30fps, recording in the low-quality Motion JPEG format. Optical zoom cannot be used while recording, and audio is recorded in mono through a small and very tinny microphone mounted beside the lens. Video quality is distinctly average, but the audio quality is very poor, with a lot of background noise and no directionality.

The A3100’s overall performance is pretty good. The camera can start up and take a picture in well under three seconds, which is quite quick, and the consistent shot-to-shot time of approximately 2.2 seconds is also respectable. In continuous shooting mode it can maintain approximately one frame a second apparently indefinitely, which is pretty good for a what is after all a relatively cheap camera. 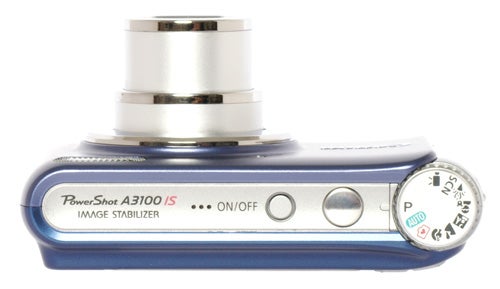 The autofocus system is very good by most standards, but is slightly let down by the rather clunky focusing motor in the lens. Nonetheless it focuses quickly and reliably in almost any lighting conditions, with a good bright AF assist lamp giving it a range of around four metres even in total darkness.


Unusually for a Canon camera, the A3100’s only real weak spot is its image quality, which has a number of annoying problems. The automatic white balance is unreliable, causing colour tints when presented with large areas of green in an image, obviously something of a disadvantage for landscape photography. The lens too is far from perfect, with with significant barrel distortion at wide angle. Overall sharpness is good, but there is a lot of chromatic aberration towards the corners of the frame.


The biggest weakness however is noise control, which is usually a strong point for Canon cameras. Images show significant colour and luminance noise at 200 ISO, and while the noise control does clean things up a bit at 400 ISO it only does so at considerable cost in fine detail, which gets worse at 800 ISO. The quality at the 1600 ISO maximum is very poor indeed. All in all a bit of a disappointment for what was looking like a pretty decent little compact. 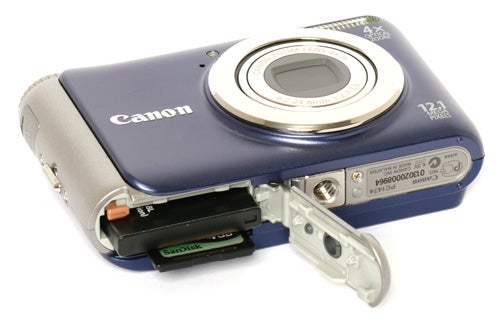 The Canon PowerShot A3100 may not have the creative versatility of its forebears, but it is a well-made and sensibly designed camera offering a useful specification at a reasonable price. Build quality, handling and performance are all up to Canon’s usual standard, but unfortunately the camera is let down by inferior picture quality. 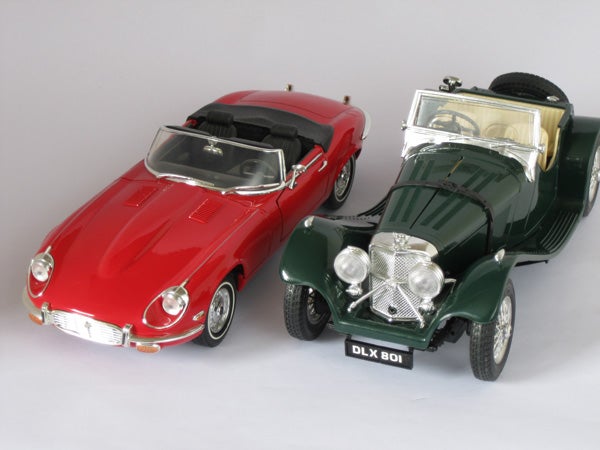 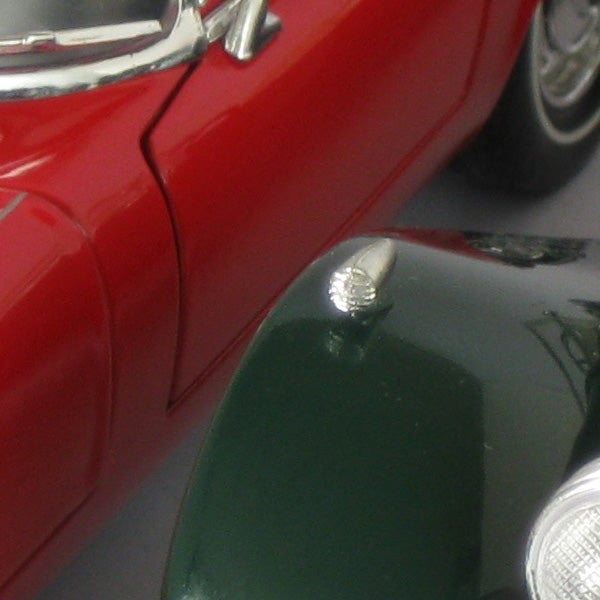 At the minimum ISO setting the picture quality is pretty good, with no noise and plenty of detail. 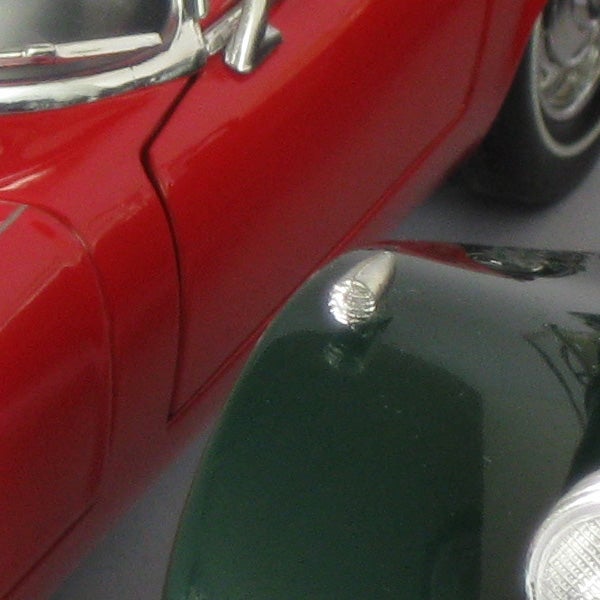 Still no problems at 100 ISO, as one might expect. 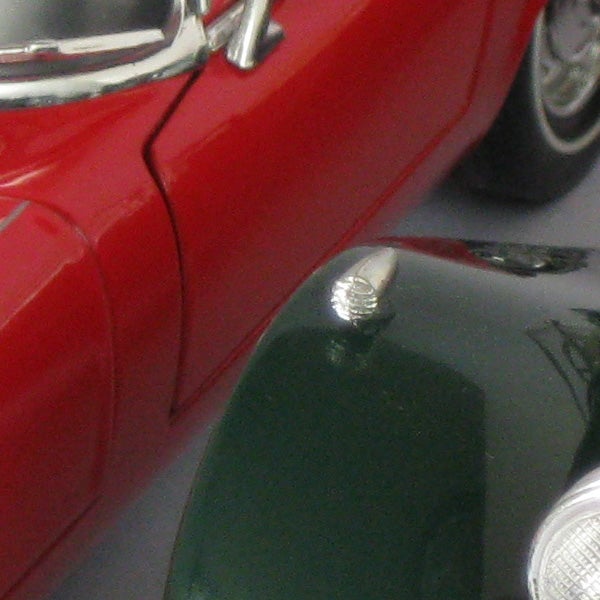 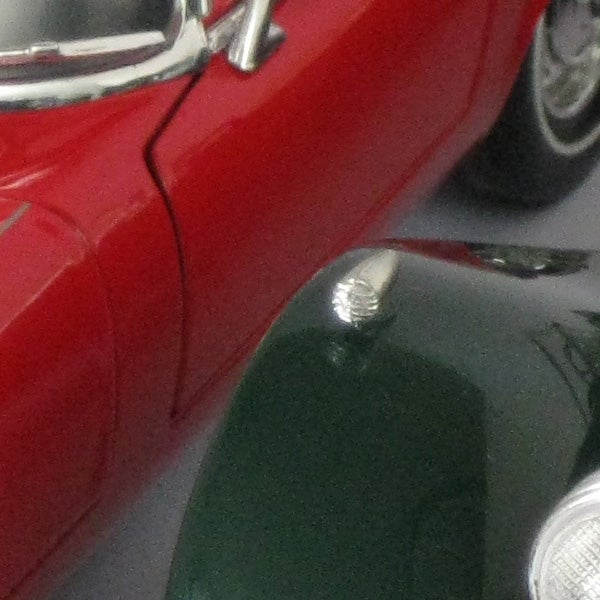 Noise reduction has cleaned up the colour at 400 ISO, but there is still luminance noise and less detail. 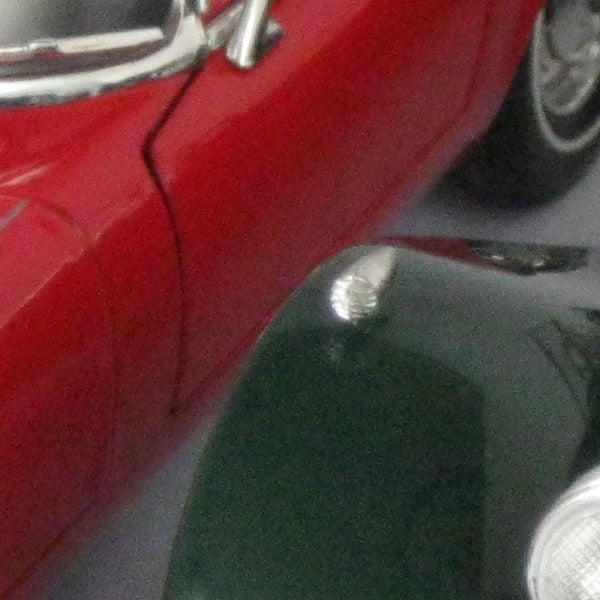 Detail is greatly reduced at 800 ISO. 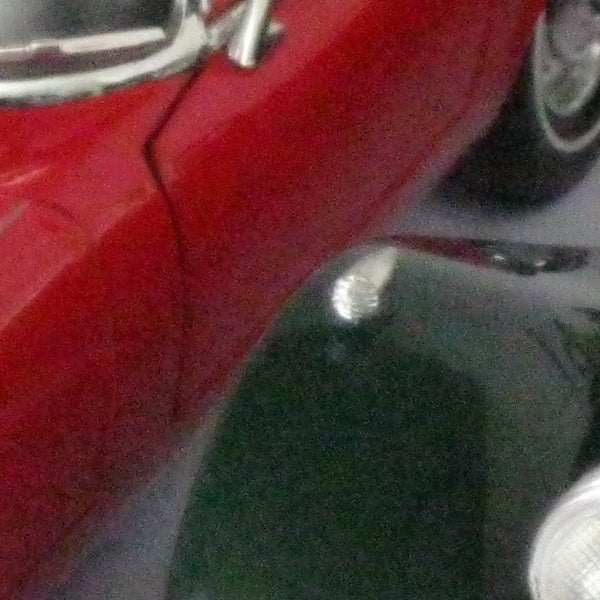 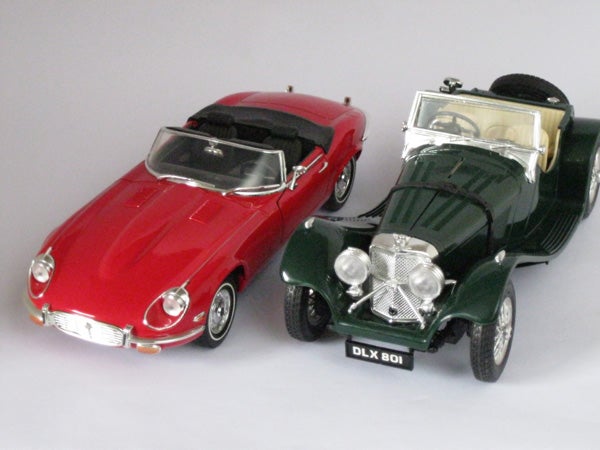 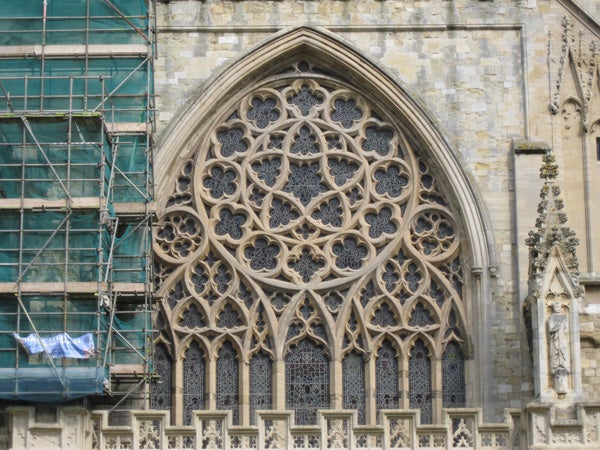 Here’s the usual detail test shot of the West Window of Exeter Cathedral, for you to compare with other cameras. See below for a full res crop, or click for the full sized image. The downloadable file is approximately 3.6MB. 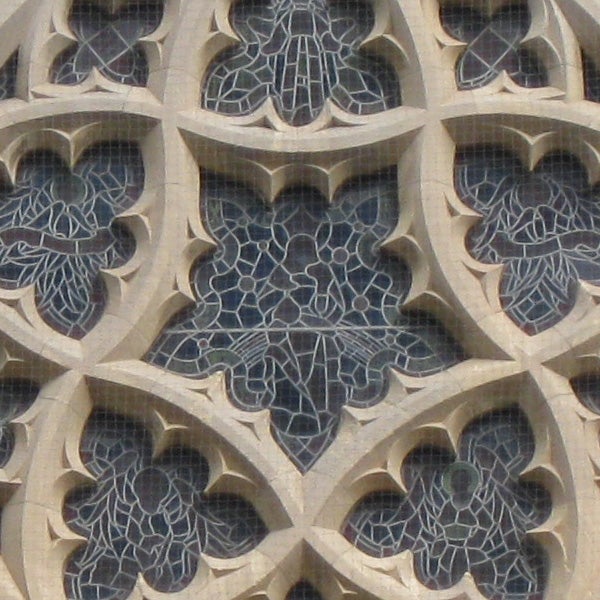 The level of fine detail is very good near the centre of the frame. 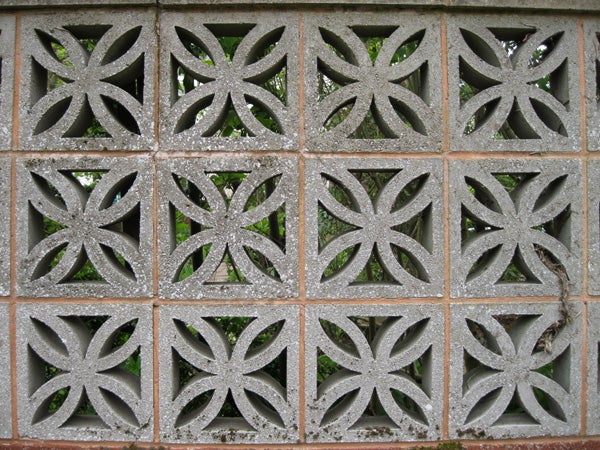 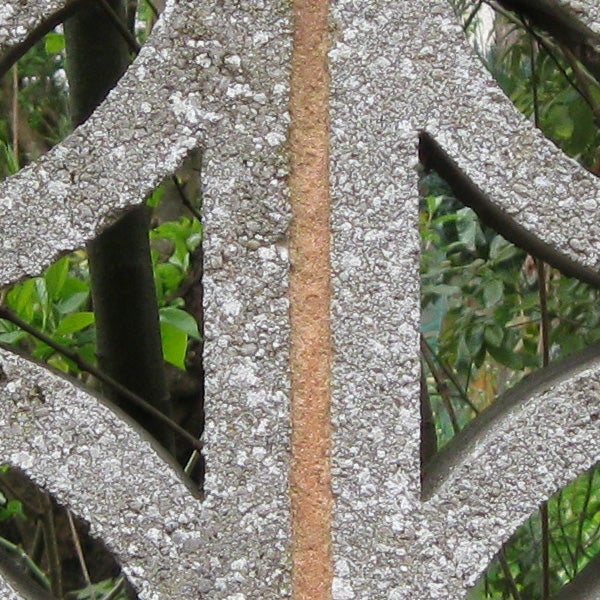 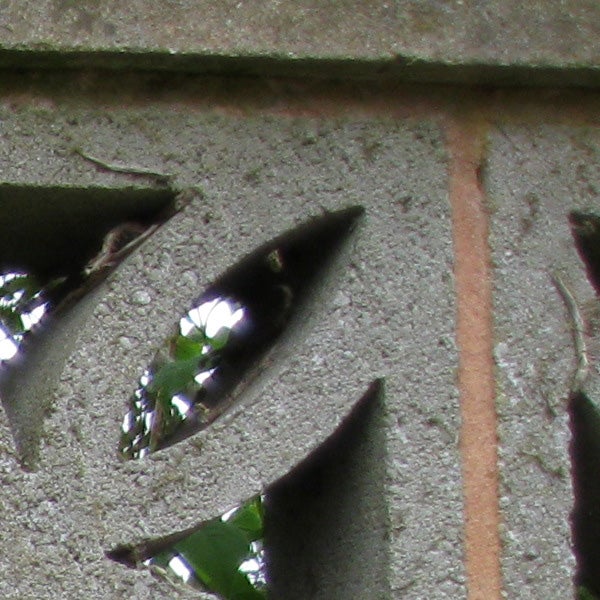 Corner sharpness isn’t bad either, but there is quite a bit of chromatic aberration. 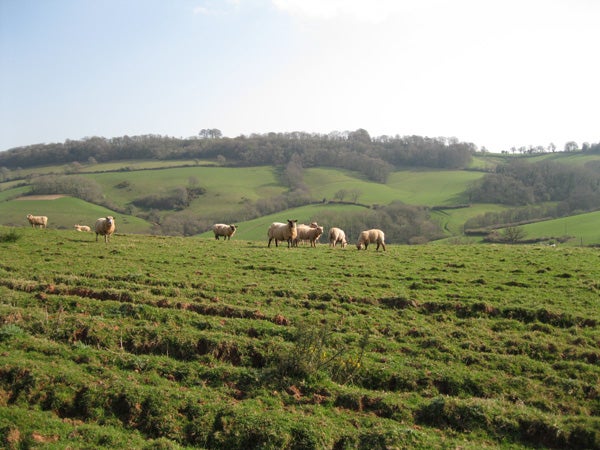 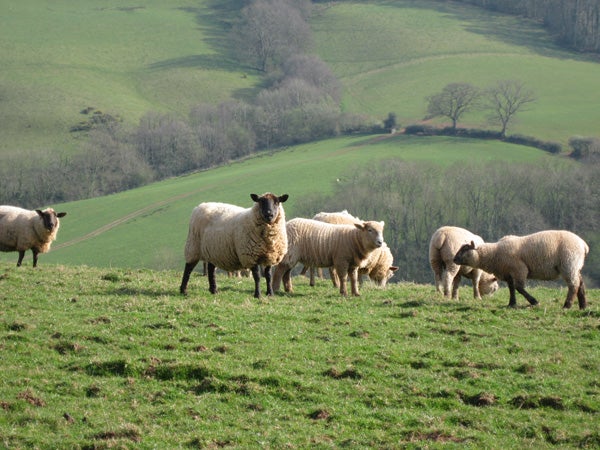 The telephoto end is equivalent to 140mm, just enough to see that this sheep has mistaken me for a Welshman. 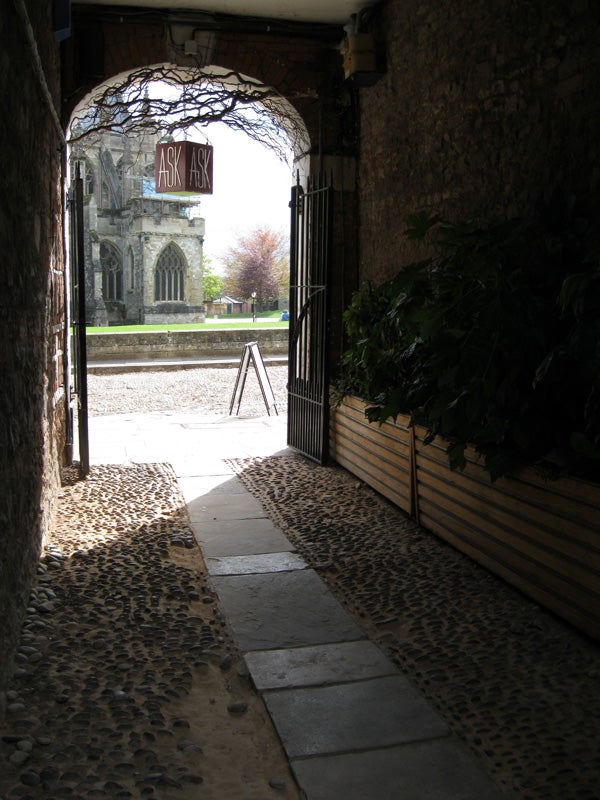 Dynamic range isn’t too bad for a 12MP camera, with some detail in the shadow area. 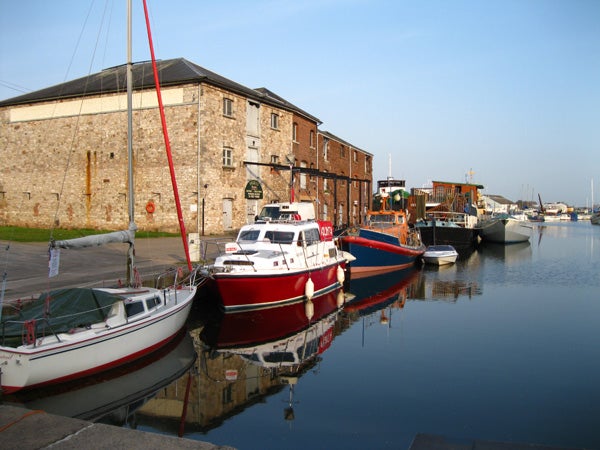 Colour reproduction is good in the default setting. 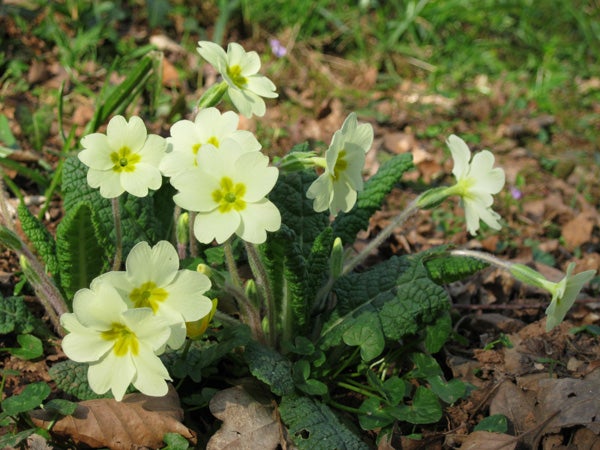 The macro range is 3cm, but the auto white balance has left a greenish tint in this image.