Canon’s PIXMA MP990 is the most expensive all-in-one in the company’s range and has all the bells and whistles of the others, plus some. It’s designed for home use and aimed also at photo enthusiasts, particularly those interested in black and white photography.


This is a big, silver and black machine, relieved by the fact you can leave it closed when not in use and by its 150-sheet paper cassette, which slides in underneath, so the rear tray, also 150-sheets, only need be opened when you’re printing photos or on special paper. As with several other PIXMA models, this one can print on properly coated CD and DVD blanks, using a separate disc holder, which slots in behind a fold-down cover inside the machine. 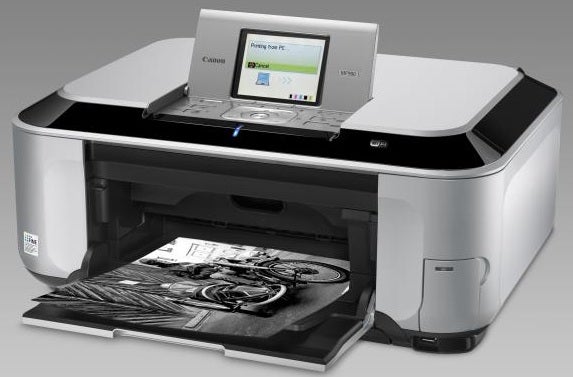 A small, hinged panel in the scanner lid reveals the machine’s control panel and also a large, 93mm LCD display. The controls include Canon’s click-wheel, which is used to navigate most menus, and large, clear buttons for other functions.


The scanner itself is a standard A4, glass flatbed with no Automatic Document Feeder. Inside the scanner lid, though, is a removable panel which reveals a transparency and negative holder, which can be laid on the flatbed for high-resolution scanning of photographic media.


A rather flimsy cover, set into the right-hand, curved front edge of the machine reveals three memory card slots, for CompactFlash, SD and MemoryStick, and xD cards. There’s also a PictBridge socket, which doubles up for reading USB drives. 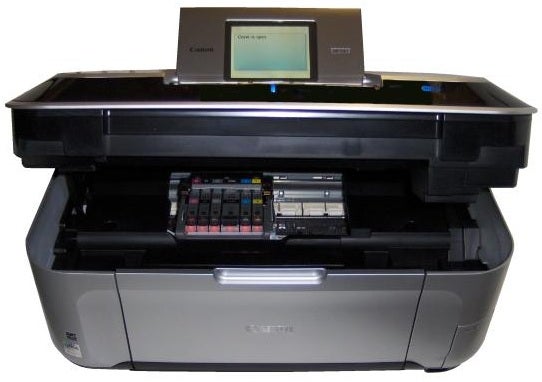 At the back of the machine are sockets for USB and Ethernet, but the PIXMA MP990 also offers wireless networking. Wi-Fi setup is pretty straightforward, though entering a WEP passcode with just the click-wheel is a bit long-winded.


Canon provides a good software bundle to back the machine and includes a copy of the ArcSoft PhotoStudio photo editor, as well as the usual package. There are drivers for Windows and Mac included on separate CDs.


The PIXMA MP990 uses a six-ink print engine, but rather than adding light cyan and light magenta, it adds photo black and grey inks to the standard CMYK set. All six cartridges click into the print head in standard Canon fashion and each has its red LED indicator to show it’s properly seated and to flash when the ink is low.

Canon reckons the PIXMA MP990 can print 11.9 ISO black page images a minute and 9.1 colour page ones. We didn’t see quite these speeds, though we got closer to them than is often the case. Our 5-page text print returned 6.98ppm, which rose to 9.30ppm for the 20-page test. The 5-page text and graphic test gave 5.45ppm.


These speeds are reasonable for an inkjet, though there’s a fair degree of variation because of the amount of fiddling about the printer does before and during printing. On one photo print the machine took 45s before it started printing. On the second run, this preparation time was much shorter, and we saw these kinds of differences on some of the other print tests, too. 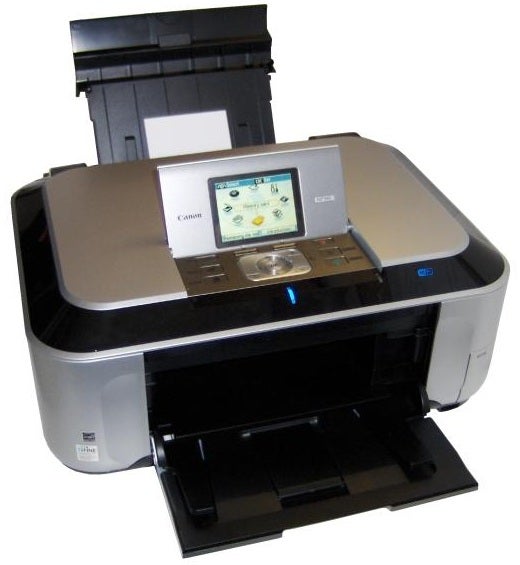 When it comes to duplex print, things are a bit grey…literally. The printer appears to use the dye-based photo black ink in place of the pigmented black used for single-sided text print. This is likely to be because the dye ink dries more quickly than the pigmented and Canon can reduce the pause between printing first and second sides of each page.


However, the dye-based ink isn’t as dense as the pigmented, so text appears decided grey in comparison with simplex pages. The colour print head is also shallower than the black, so it takes more passes to print a page, which means printing is slower. As well as the pause between sides, this slower print increased the print time to 7:04 for our 20-side, 10-page test, giving a speed of 2.83 sides per minute, which is slow.


Photo prints, something of a specialism of this machine, come through quickly, with our 15 x 10cm tests taking around 30 seconds, irrespective of the source.


Print quality is generally good, leaving aside the greyness of duplex pages. Black text on simplex pages is dense and generally well formed, with only occasional ink bleed from the pigmented ink. Colour graphics are bright and smooth, with no signs of banding and very little obvious patterning from colour dithers. 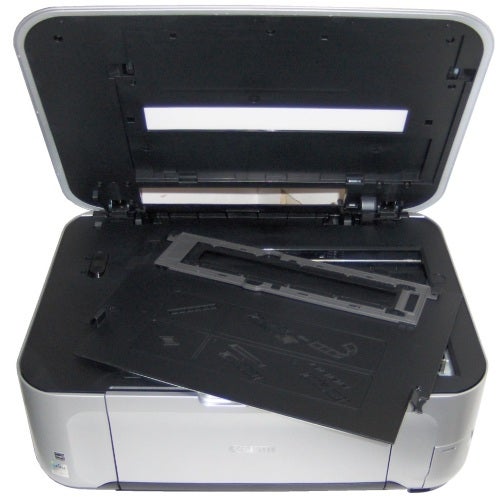 Photo images remain among the best we’ve seen from five or six-ink machines. Colour transitions are smooth, tones are natural and there’s plenty of detail in darker as well as lighter areas of images. We printed a couple of black and white photos and mid-range shades are a definite improvement over printers relying on black ink alone. Grey neutrality is good throughout the range and without going to eight or nine-colour machines, is probably the best you’ll see.


There’s an extra grey cartridge to factor into the colour running costs for this machine which pushes up the colour cost per page. We calculate a black page cost of 3.18p and a colour page cost of 9.27p, both including 0.7p for paper.


The black page cost is pretty much on a par with those inkjets which don’t major on cheap black print – Kodak and Lexmark are those that do. The colour cost is about a penny per page higher than some of Canon’s competitors.


As the top-ranking all-in-one in Canon’s range, the PIXMA MP990 includes wireless connection, CD/DVD print, transparency and negative scanning and an extra grey ink for improved black and white prints. Print quality is excellent and speeds, though a little erratic, are in the same order as its main rivals. For the given feature set, the price is not unduly high and overall it deserves a recommendation.