With simple multi-function machines available for well under £100, it’s legitimate to ask what extra value you get my paying over £200 for the high-end PIXMA MP830 from Canon. The specifications give some of it away, with things like duplex printing and duplex scanning from the Automatic Document Feeder (ADF), a paper cassette as well as a paper tray and direct printing from memory cards and PictBridge cameras.


There’s more to it than just specification, though, as the machine itself has a quality finish in black and silver with inset green indicators. There are neat touches, like the fold-in tray for the ADF, which acts as a dust guard when it’s not in use and the fold-down paper-out tray at the front, which automatically pops down when you start printing, if you forget to open it first.


The machine has two different paper sources, either of which can be configured for photo blanks or plain paper up to A4 in size. There’s the traditional, near-vertical tray at the rear, which can take up to 150-sheets and has a rather fiddly paper support at the side, but also a 150-sheet cassette at the front. You can select between the two paper sources through software or via a button on the front panel. There’s also a CD carrier, which slides in from the front of the machine, though it’s well inside and you have to fold down a support, first. It’s not difficult, but it’s awkward to get at. 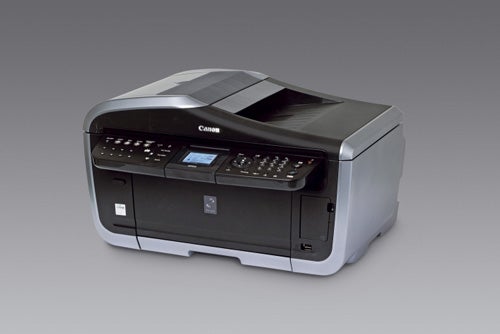 The control panel is well laid out, with mode buttons in the top left-hand corner, fax quick-dial buttons below and on the right, a four-way wheel, a number pad and start and stop buttons for colour and black jobs. In between the two sets of buttons is a 63mm LCD screen, for previewing photos from memory cards or directly from a camera, and for working through the machine’s menu system.


As supplied, the LCD display doesn’t look that good, with dowdy colours and poor contrast when previewing images. Fortunately, you can adjust the contrast from deep within the settings menus and things then look much more natural.


At the back there are sockets for USB 2.0 and a phone line, as the machine has full fax support and can send and receive colour faxes with suitably equipped machines at the other end of the line.


Lift the scanner section and you can get at the head carriage. The print head is a click-fit and you can then clip each of the five ink cartridges into the head – a red led lights to confirm each cartridge is correctly inserted.

The machine prints equally well from either paper source and will copy to either from the flatbed or the ADF, too. The print head includes a long-swathe black print head, so text pages print commendably fast. Our text test completed in 33 seconds. Printing in colour takes longer; it took one minute 10 seconds to complete the text and graphics print.


Duplex printing, which enables you to print on both sides of the paper in a single job, is a useful feature, but is spoiled here by the speed at which the PIXMA MP830 does it. Having printed the first side, it reels the paper slowly back inside and stops to think for a while, before printing the second side from bottom to top, so each duplexed sheet comes out feet first. The pause is presumably due to the processing time needed to turn the page image round. Our 20 page text print took 8:41 to print this way, as against 33 seconds for a five page, single-sided print.


Printing a 15 x 10cm borderless photo is claimed to take 36 seconds, but we couldn’t get anything out in normal print mode in less than 57 seconds. 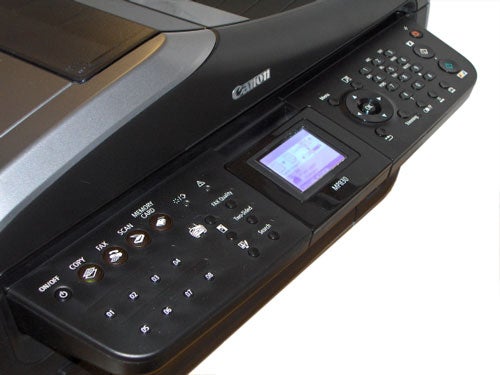 When it comes to the quality of the prints, regular text comes out clear and dense and solid graphics are just that, solid and with no signs of banding. Photos also come out well, with good colours and fine detail. The only blot on the landscape is those duplex prints, again. Text looks thin and a bit ragged and on closer examination, ink is not evenly distributed and the paper nap shows through.


The PIXMA MP830 uses the same print head and cartridges as the PIXMA iP5200R, reviewed back in October 2005. Since then the cost of ink cartridges and paper has dropped considerably, which means that where the iP5200R cost 3.59p for a black text page and 49.6p for a 20 per cent cover colour one, the MP830 figures are 2.44p and 35.8p, respectively.


The black print cost is now good for an ink-jet, multi-function device, but the colour cost has only dropped from very pricey to pricey. It’s useful to have a separate pigmented black ink for printing text, though, as you won’t have to change cartridges as often in normal, home office use.


The extras on offer from this multi-function device are useful, though duplex print is a bit of a let down, because of its poor speed. Even so, the PIXMA MP830 feels like a proper piece of office equipment, rather than a light use, home-office device. A little pricey to print colour on, but overall, a useful all-in-one.