With the release of the PIXMA MP600, Canon demonstrates there’s still innovation to be seen in the design of all-in-one devices. New ideas, particularly in the design of the machine’s operating system and the positioning of its control panel, make it an interesting test subject.


This is a neat, square-cut machine, a second-generation take on the ‘lacquer box’ look of recent Canon all-in-ones. It also uses the dual paper source approach of recent multi-function devices, where you can feed paper from a near-vertical hopper at the rear or from a cassette sliding in under the machine. Either source can be set up for a variety of paper sizes, so you can choose which one to feed plain paper from and which to use for photo blanks or letterheads. There’s also a CD/DVD carrier, which feeds from the front, so you can directly print coated disc blanks. 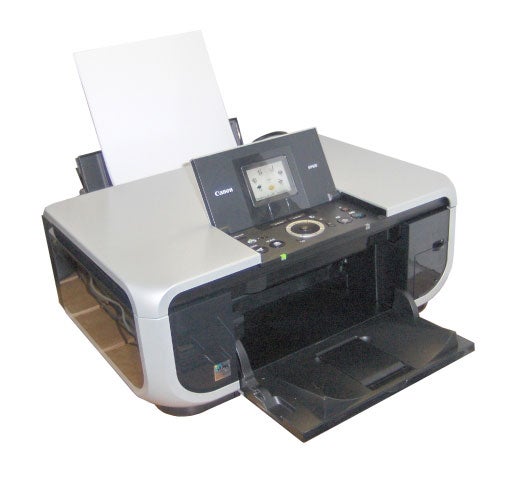 The control panel for the PIXMA MP600 is set into the lid of the flatbed scanner, a novel approach and one which reduces the machine’s desktop footprint. Fold up the 61mm LCD display and you have a comprehensive set of controls beneath, including a click-dial which works with the on-screen menuing – more on this in a minute.


The flatbed scanner glass is on a slight slope towards the front of the machine, which helps when loading originals, as they slide naturally to its front edge. To the right of the fold-down output tray, a small cover reveals two memory card slots, which combine to take all the common types, including SmartMedia. There’s a PictBridge socket for camera connection, too. At the back, a single USB 2.0 port is the only PC connection.


Canon provides a good selection of software with the machine, including copies of ArcSoft’s PhotoStudio bitmap editor and OmniPage SE 4 for OCR. It all installs painlessly enough and gives above-average support for the machine’s functions. 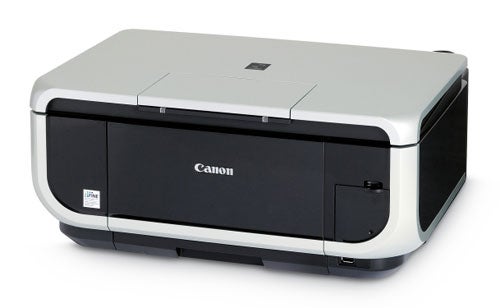 Using the PIXMA MP600 as a standalone device is made considerably easier by the adoption of what Canon calls Easy-Scroll. Most of the major menus employ an elliptical arrangement of icons or options which you scroll around with a click-wheel on the control panel, pressing an OK button in the centre of the wheel to select.


Two new buttons, labelled Navi and Home, are also useful extensions. Home takes you back to the top level menu and Navi offers you a complete breakdown of each operating mode – copy, scan, memory cards – so you don’t have to tunnel down through the menu structure.

After initial alignment of the print head and cartridges, which takes about six minutes, the printer is set up to print. Black text print uses the pigmented PGI-5BK cartridge and produces crisp, clean text with very little sign of spatter or feathering into the paper nap. Colour graphics are also generally good, though occasional white speckles in areas of solid colour show that some paper fibres are not getting fully covered. Colours in a copy, using the machine’s scanner, come out noticeably lighter than in the original.


Photo prints, as we’ve come to expect from Canon inkjets, are of very high quality. There’s plenty of detail in darker areas of the test image and variation in colour, as in skies, is well handled, though with some slight stippling. Foreground detail is sometimes a little less sharp than with some other machines, though this varies between images.


Print speeds are closer to Canon’s claims than with most machines of this type, because Canon quotes speeds in normal mode, as well as draft. The company is to be applauded for its honesty and where it claims 14.8ppm for black print, we saw 9.1ppm. Our colour test speed of 4.7ppm, against Canon’s claim of the 11.6ppm, wasn’t quite so good, though. 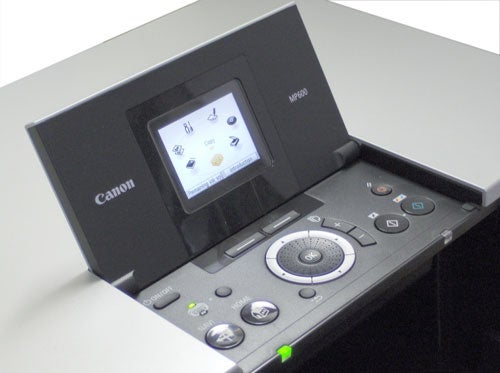 The PIXMA MP600 includes a duplex facility, but this slows printing dramatically. A 20-side duplex document took 8 minutes 42 seconds to complete, over four times as long as a similar, single-sided document would take. Part of this was down to an inexplicable nine second pause before printing the second side of each sheet.


There are five inks in the PIXMA MP600, with pigmented black used on monochrome pages and dye-based black on colour ones, including photos. Canon’s page-yield estimate for black ink is 360 pages and we managed 400 under test. The colour ink estimate, however, is 420 pages and we managed 750 – quite a margin of error, but on the positive side. In both cases the printer prevented us printing before there was any noticeable drop-off in print quality. This is annoying, as the printer only estimates the ink used and there may well be some wastage.


The page costs work out at 1.95p for a five pre cent black page and 25.2p for a 20 per cent colour one. This is a good result, particularly for the black text page, coming out lower than either the MP160 or the MP830, both tested recently.


While the speed results may not be close to Canon’s claim for this machine, in most other respects it does very well. Print quality is good, page costs are commendably low and the flexibility of the PIXMA MP600 – with its dual paper sources, duplexing and innovative control method – make it good value at just over £100.