Canon, like most of its competitors, has managed to design several all-in-one printers based on the same print engine and to differentiate the models based on feature set. The PIXMA MP540 uses the same five-ink print system as in the £100 MP620, but this machine costs 25 percent less, so something has to go.


Looking a bit like earlier Canon all-in-ones, with gloss black piping and highlights reminiscent of an oriental lacquer box, this machine looks clean and well-proportioned, when closed. 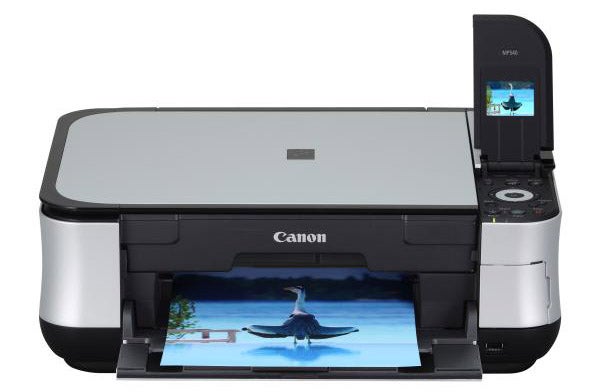 A hinged support at the rear lifts up to provide a paper support for plain or photo paper, while an output tray at the front uses a novel pair of raised arms to support each sheet with a slight curve, so that it doesn’t flop about. Under the output tray is a paper cassette, which can also hold 150-sheets of plain paper.


The A4 scanner is available once you lift the silver and black lid and to the right of this a flip-up cover has a 48mm LCD display set into its underside and reveals a normal Canon control panel, including a click-wheel for menu selection. A flip-open cover below the control panel reveals three memory card slots, which handle all the common types, and below that is a PictBridge socket.


At the rear there are sockets for just the mains cable and USB. There’s no Ethernet or Wi-Fi option on this machine and other things missing in comparison with models further up the range include CD/DVD print, an Automatic Document Feeder and duplexing.


Physical set up involves plugging the five cartridges into their holders in the print head. There are two black cartridges: a pigmented one for printing text and a dye-based one for photos. The print heads are capable of producing ink drops down to an impressive 1pl.


The software bundle supplied with the machine is pretty similar to that included with others PIXMAs in the range, and includes document handling and OCR software, as well as an applet for printing Web pages. Drivers are provided for all recent versions of Windows and for Mac OSX 10.3.9 and newer.

Canon doesn’t make completely unrealistic claims for the speed of the PIXMA MP540, stating 7.3ppm for black print and 5.5ppm for colour. Having said that, they’re still some way out from the day-to-day speeds you might expect, particularly if your print runs are short. This is mainly due to the amount of fidgeting around the printer does before starting to print.


It sometimes takes as much as 29 seconds making squeezing noises before the paper starts to feed. This kind of initial housekeeping is excluded from the ESAT measurements in the ISO standard, which only look at page to page speeds. With short print runs – the average office document across Europe is just four pages – initial processing times are a noticeable proportion of the time for the whole print job. 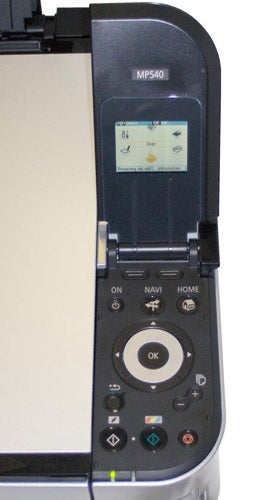 
Photo prints are particularly quick, with a 15 x 10cm print taking 1:48 in Best mode and 1:03 in Standard mode. Only when you need really top quality reproduction do you have to switch to anything other than Standard mode.


One anomaly in the use of the PIXMA 540MP, which we’ve noticed with other Canon all-in-ones, is directing paper from specific trays when printing. In trying to print our 20-page test document from the cassette, rather than the rear tray, we set it to cassette in the printer’s menu, in the Option dialogue of the driver and in the Paper Source field in the Main driver tab, but it still printed from the rear tray.


Eventually we found a Paper Source field in the Paper tab of Word’s Page Setup dialog, which appeared to over-ride all the others. Why on earth does it need to be set in four different places?

The quality of prints from this machine is pretty good throughout. Black text looks clean, though it’s not up to laser standards and coloured graphics are bright and attention grabbing, with good registration of black text over the top. Even a colour photocopy produces workable colours and clean text, though there’s some slight blurring of black text over colour.


Our test photo on Canon’s top of the range Platinum photo paper is superb, with beautifully smooth colour variations, plenty of detail in areas of shadow and natural colours throughout. Even on the slightly less expensive Pro paper, photo images are natural and have a good range of detail. These are the best photos we’ve seen out of any machine under £100.


We couldn’t find any source for the five ink cartridges that was cheaper than those we used for our MP620, so we get costs of 3.89p for black and 9.12p for colour on both. Neither of these costs is particularly low, but you always expect to pay more when printing on a machine with a cheap purchase price.


There aren’t many all-in-one printers at under £75 which do as good a job as the MP540 and none which offer twin paper sources as standard and output quality as high as from this machine. It may not have a couple of the bells and whistles of the MP620, but it has more than most of the competition from other manufacturers.