Entry-level all-in-one printers continue to drop in price and improve their feature sets. Canon’s new PIXMA MP495 is the same price as its predecessor, the PIXMA MP490, while now including wireless connection as standard. 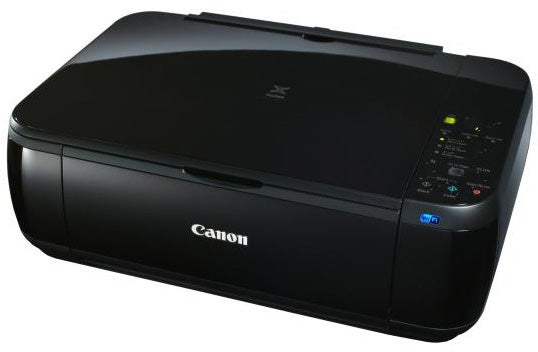 However, it does leave some things out of the equation, too, having no memory card slots or even a PictBridge connector, where the MP490 had both. The ‘P’ in MP495 is supposed to stand for Photo, but it’s hard to see how this all-in-one qualifies, given it’s impossible to print photos directly from a camera. You’ll have to load them into a PC or Mac, first, and print them conventionally from there.


Canon has swung away from its silver and black colouring and has instead gone for a high-gloss black look, which is smart but so easy to smudge that you’ll probably want to keep a cloth handy. It’s also a devil to photograph, but that’s our problem.

The paper path is conventional enough, with paper feeding from a 100-sheet tray set up at the back, to a fold-down output tray at the front. The front tray pops open automatically if you start printing with it closed. On top of the machine is a simple flatbed scanner, with a lid that lifts to accommodate books as well as single sheets.


The control panel is surprisingly busy for a low-cost printer, with a seven-segment LED display used to display the number of copies as well as symbols for status conditions. There are also indicators for low ink, paper jams and paper type, which is selectable through a push-button. In front of all these are six buttons to start and stop scan and copy jobs, to call up setup functions and to automatically fit a print to the page, which is an unusual feature. 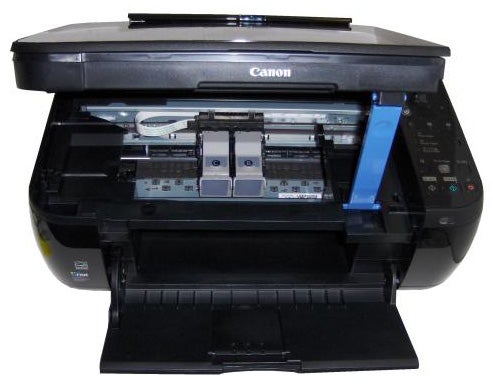 This is a twin-cartridge printer, with separate black and tri-colour cartridges. Canon describes it as a hybrid system, which simply means that the black ink is pigmented while the colour inks are dyes. They both clip into place once you’ve lifted the main scanner section of the PIXMA MP495.


Wireless installation is more confused than some, as the setup program only refers to USB or network connections and only mentions wireless when you’re a way down the network route. You have to use the wireless setup cable as a temporary connection and enter your WPA passcode at the PC, though the process is then pretty automatic. The instructions could definitely be clearer for those unfamiliar with printers – this is, after all, an entry-level machine.

Canon is fair minded enough to quote ISO speeds, in this case 8.8ppm for black and 5ppm for colour. Even these more realistic figures were difficult to match under test, though, mainly because the printer performed tests and preparation taking 15 seconds or so before starting each print. This time would be excluded from the ISO measurements.


Our five-page text document printed at 5.6ppm, but this increased to 6.9ppm on the longer, 20-page test. The black text and colour graphics pages took over two minutes, though, giving a speed of just 2.4ppm. A single page copy completed in 41 seconds and a 15 x 10cm photo on an A4 glossy photo sheet took 1min 24secs. Both these speeds are reasonable for a machine at this price. 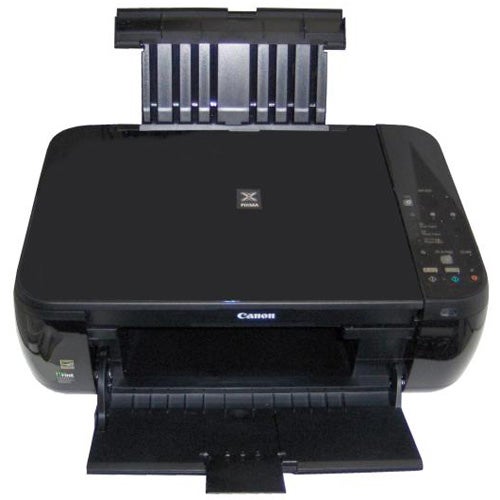 Print quality is generally good with clear, well-formed black text and draft mode text still looking very serviceable. Colour graphics are also clean and bright, giving attractive and eye-catching documents. We had problems with missed registration in the colour scan we took, producing jagged marks in areas of solid colour. This was reproducible between copies but could have been a problem with this particular sample.


The photo print was clean and colours were natural, though, unusually for Canon, a lot of darker detail was lost.


Since reviewing the last Canon machine to use the same cartridges as the PIXMA MP495, it’s surprising to find that consumable costs have increased slightly. In this business, you normally expect prices to continue to drop over time, but this doesn’t always apply to cartridges.


Using the best prices we could find on the Internet gives ISO page costs of 4p for black and 8.6p colour. These are similar to other Canon all-in-ones, even those costing considerably more. Compared with entry-level all-in-ones from other manufacturers, these running costs sit in the middle of the field.


What it really comes down to is whether you value wireless connection more than memory card slots and PictBridge connection for your camera. If you rarely print photos then the Canon PIXMA MP495 still offers good value as a low-cost printer, copier and scanner. If you need to print images, though, it’s more awkward than its immediate predecessor.