What would you expect to pay for a basic all-in-one printer, with flatbed scanner, good quality black and colour copying and plain and photo print? Canon’s PIXMA MP270 is available at just less than £40 from several online retailers, which is less than any other all-in-one we’ve tested.


The neatly-styled black and very light grey box follows the lines of Canon’s other PIXMA MP machines. A slight curve to its vertical edges gives it a modern, functional look. The flatbed scanner uses a Contact Image Sensor (CIS) scanning head, which means it’s particularly slim and doesn’t add much to the overall height of the machine. 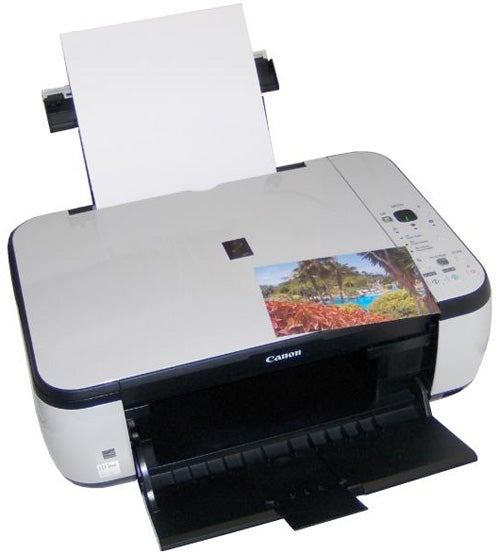 The control panel – set straight into the top surface of the printer, to the right of the scanner cover – is surprisingly well-endowed. There are buttons for copying and scanning, one to fit a copy to the page and others to select paper type. The main display is a single, seven-segment LED, which is used to set copy numbers, from 1 to 9, but indicates much more.


The display is also used to show a number of alphabetical characters, so you can select different menus without having to have an LCD panel. The characters used don’t tie in that well with their functions, though – ‘U’ for head alignment, ‘A’ to print the nozzle check pattern, for example.


Paper feeds from the a tray at the rear – where a support pulls up and locks into position – to the inside of the front cover, which automatically flips down if you start printing without opening the machine manually. 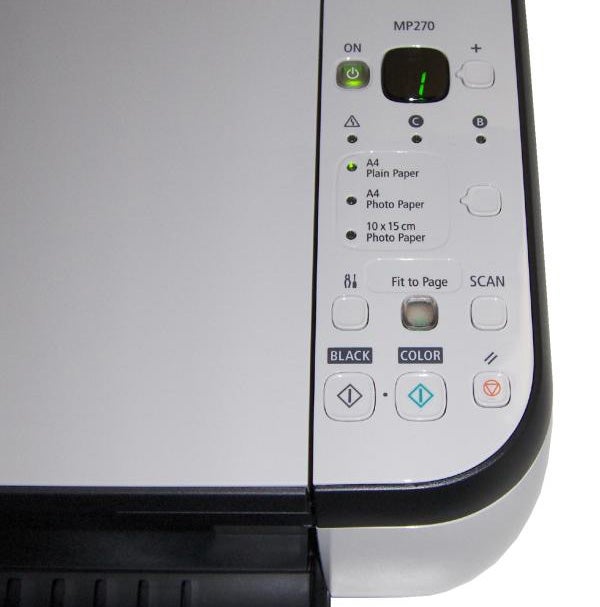 There’s a Pictbridge socket to the right of the output tray, which enables direct print from a camera, but there are no memory card slots and no USB print, because there’s no way to display and select files to print from a USB drive. If you plug one in, you get an enigmatic E9 error.


At the back is a solitary USB socket, as the PIXMA MP270 supports neither cabled nor wireless networking. Lift the scanner section and the twin head carriers slide into the middle of the carriage, so you can clip in the cartridges. There’s a black cartridge and a tri-colour one and both plug into place very simply.


Canon provides Windows and OSX drivers for this machine on the bundled CD, as well as standard Canon utilities for scanning, photo editing and printing Web pages.

The PIXMA MP270 uses the same print engine as the PIXMA MX340 we looked at a couple of weeks back. You might expect the two to have very similar performances, therefore, but from past experience this is very rarely the case. Rare, but not unknown, as these two machines produced exactly the same times for our 5-page text, 20-page text and 5-page text with colour graphics documents.


They’re not bad speeds, either, with a maximum black text figure of 6.9ppm and a colour figure of 2.4ppm. They’re quite a way below the rated figures of 8.4ipm and 4.8ipm Canon quotes, though, which is odd in itself. Despite using the same print engine as the PIXMA MX340, the company only rates that machine at 7.5ipm and 4.5ipm.


Without an ADF you can only produce single-page copies from the PIXMA MP270 and this one managed it in a sprightly 38 seconds. A 15 x 10cm photo took one minute, 23 seconds in high-quality print mode and 54 seconds in normal mode. 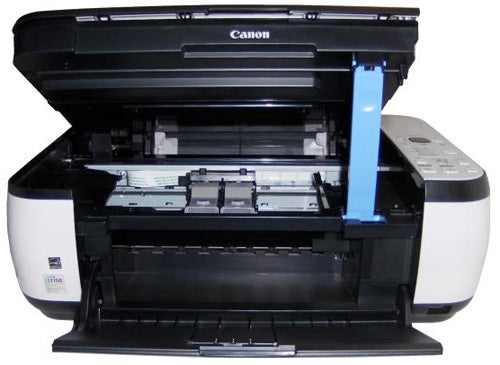 Normal print quality is more than sufficient for day-to-day photographs and, while not quite up to the standard of Canon’s four-colour and six-colour printers, it produces smooth, clear photos, with plenty of foreground detail and a good colour gamut. Even dark areas of images show up well and colours are natural throughout.


Plain paper prints are also good, with clean, black text, though perhaps not quite as crisp as from more expensive printers in the range. Colour graphics on plain paper show a little dithering, but nothing too distracting and colours are solid and attention-grabbing. Colour copies are particularly good – you can tell which is original and which copy, but you have to look closely.


Even in the couple of weeks since our review of the PIXMA MX340, consumables prices have dropped slightly, so using the high-yield cartridges for this machine gives page costs of 4.2p for ISO black pages and 9.1p for ISO colour ones. These costs are pretty much on a par with those from other entry-level all-in-ones, though they drop with the rising purchase price of the printers themselves.


This is a pretty exceptional machine for £40. Although you have to put up with the slightly eccentric use of the single-character LED display – we recommend you print out a key to what all the characters imply – it achieves most of the functions you might want from a basic multifunction printer. Print quality is fair, speed is reasonable and running costs are no higher than the competition. For this kind of money, you could ask for little more.