It’s quite hard to find critical reviews of Canon’s all-in-one machines on the Internet, including at TrustedReviews, because the company has pretty much perfected the technology, feature set and most importantly the print quality of its printers. How does it manage at the entry-level price point, though? The PIXMA MP190 costs well under £50 from online sources, so is there any cost-cutting in evidence? 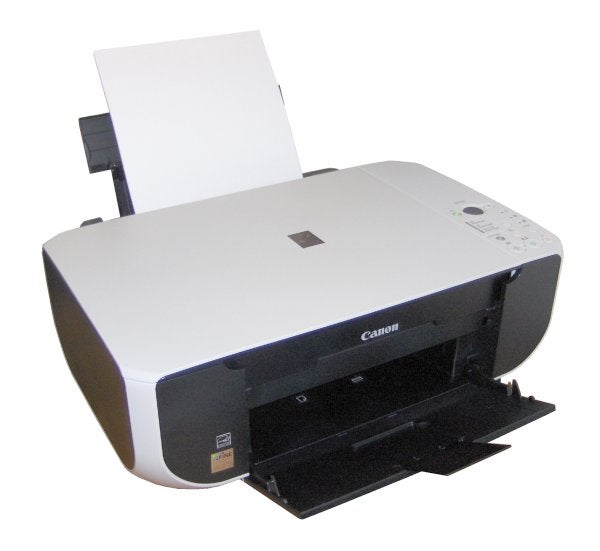 Despite its low price, the PIXMA MP190 is still a substantial machine, decked out in black and off-white and with a curve at the bottom to relieve its otherwise boxy appearance. Its lid lifts to reveal a straightforward A4 flatbed scanner, which uses a Contact Image Sensor (CIS), a cheaper technology than the Charge Coupled Device (CCD) and below that the front panel hinges down to become the output tray. Unlike Epson and HP models, which have multi-section telescopic trays, the size of Canon’s device means that pages don’t have to stick out from the front so far and the single flip-over support is enough to support A4 pages.


The control panel is surprisingly busy, with separate buttons for black and white and colour copies, a button for scans and indicators for power, paper size/type and low ink in either of the two cartridges. Unlike Canon’s more expensive all-in-ones, this machine has a single paper feed from an angled tray at the rear. Folding up a small cover at the back turns it into a pull-up paper support and you can load paper from 15 x 10cm up to A4 in this feed slot.


There’s a single-character, nine-segment green LED display, used for showing the number of copies and for other, more symbolic indications – two rotating segments when the printer is printing, for example, and an ‘o’ when the main cover is open. 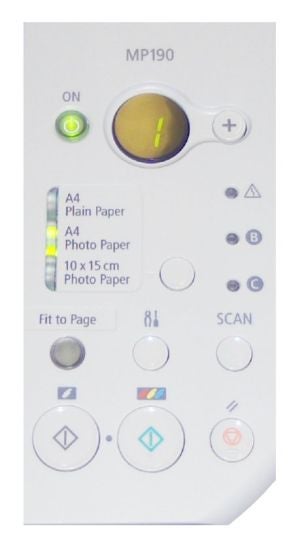 One thing sadly missing from this machine is a PictBridge socket for connecting digital cameras. Although there’s little point in having memory card slots in a machine without a colour LCD display, it would still be handy to be able to connect your camera for printing photos, without having to call on your computer to help.


If you hinge the whole scanner section up, you reveal the simple, fixed printhead, which takes twin cartridges – a pigmented black and a dye-based tricolour. These are easy to install, though you do have to click them up into position, which is a little unusual. Software installation is similarly easy, with a full suite of Canon utilities, including its own MP Navigator, which includes OCR for text document conversion.

Okay, silly speed-claims time again. Canon quotes draft and normal print speeds, but even the normal speed is said to be 12ppm in black or 8ppm in colour. Our five-page text print took 58 seconds, which is 5.17ppm and when we ran the longer, 20-page document it’s still only rose to 6.34ppm, only just over half the rated speed. Part of this was due to a consistent 15 second wait, before the printer started to feed paper. Printing our text and colour graphics test, again a five page document, took 2:12, or a speed of 2.27ppm.


The black text speed isn’t bad for an inkjet machine, particularly one in this price bracket, though the colour speed is a bit ponderous, but we can’t see why manufacturers should continue to inflate the speeds you’ll see in real life. No, that’s not true, we know exactly why they do it: it’s because every other manufacturer does it and customers still respond to the numbers on the boxes. 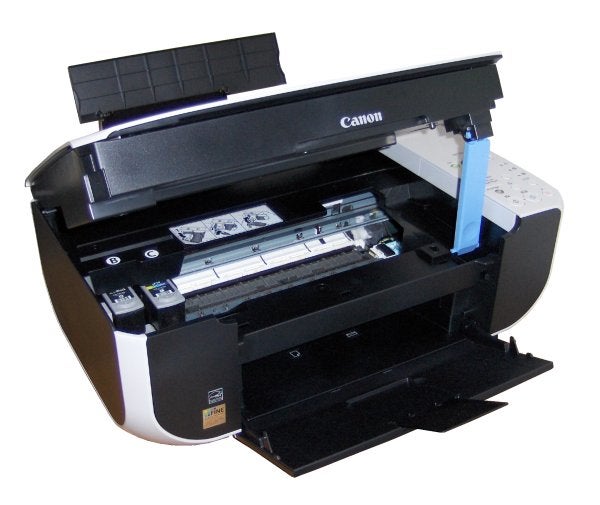 Print quality is very good. That doesn’t mean very good for a printer costing £40, that means good in comparison with many of the inkjets we review at a range of prices up to several hundred pounds. Black text on plain paper is very crisp and tightly formed, with no sign of jagged edges or spatter around the characters.


Colour graphics are also smoothly reproduced, with little noticeable dithering, clean colours and no registration problems with black text over colour. Photographs are also well detailed, in both bright and shadowed areas, colours in skies vary smoothly and look natural throughout. We printed test photos in both best and normal quality and could see very little difference between the two, though the normal mode print takes around half the time.


The two ink cartridges are available in normal and high yield versions and, as usual, we used the high yield consumables to get the best economy. Working through the maths gives costs per page for black of 4.13p and for colour, 8.75p. These are both on the high side, meaning Canon is trying to pull back some of the low asking price of the machine through its consumables. However, it’s very much on a par with some Lexmark all-in-ones.

This may be an inexpensive all-in-one printer, but it still produces excellent print quality, is easy to use and, despite Canon’s outlandish claims, is reasonably quick. Print costs are a bit on the high side and it would be useful to have a PictBridge socket, but in other respects this is probably the best all-in-one printer you can buy for under £50.