The PIXMA MG8150 sits at the top of Canon’s range of home and amateur photo range of inkjet all-in-ones. It sits above the PIXMA MG6150 and adds in a couple of extras to try and differentiate the two machines.


The MG8150 is a large, all-black box with curved corners and a domed lid, into which is set an 88mm LCD screen. This isn’t a touchscreen but, instead, Canon has built the controls into the lid of the all-in-one, where they illuminate when their related functions are available. 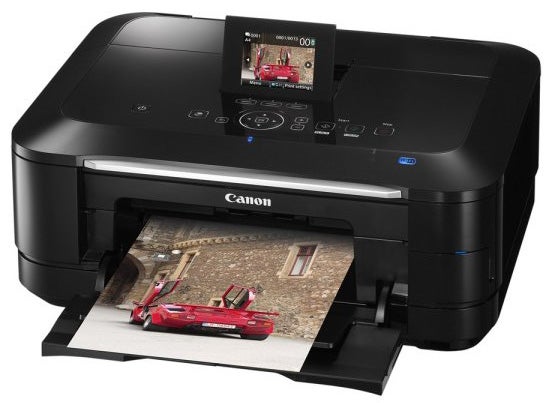 This is a much easier way of working with the printer than using most of the touchscreens on its rivals, and includes Canon’s signature click-wheel, which has now become a touch-sensitive ring, indented into the lid.


The flatbed scanner has no ADF, as it’s aimed at photo rather than business use. Lift the lid, though, and the white reflector unclips to reveal a lamp and a slide holder, so the machine can scan transparencies and negatives. The scanner has twice the resolution of the MG6150’s, too, so it can handle these small originals. 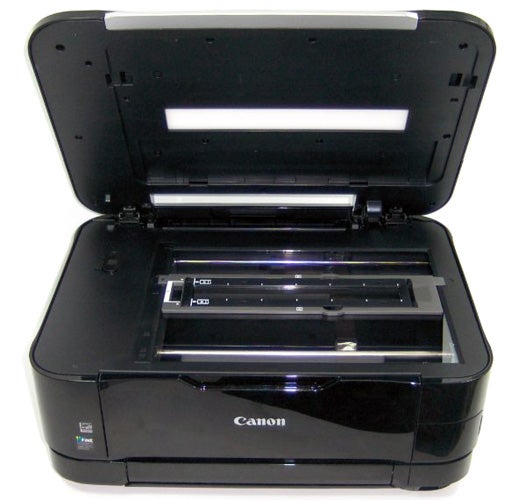 The printer has two main paper trays: a 150-sheet cassette sliding in from the front and a 150-sheet tray pulling up at the rear. Canon recommends using the cassette for plain paper and the rear feed for photo blanks, but then insists on feeding plain paper from the rear tray for print head alignment.


The front cover of the printer folds down to become the output tray and behind this is a secondary cover that pulls down for access to the CD/DVD holder, which enables direct disc printing. 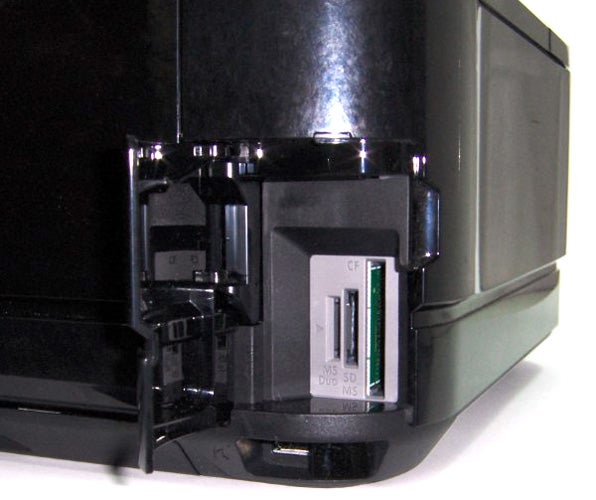 To the right of the output tray is a fold-out cover for the three memory card slots, which include Compact Flash, still used by some semi-pro and pro Canon cameras. At the rear are sockets for USB and 10/100 Ethernet, but the printer also supports wireless connection.


The printer uses six individual ink cartridges, adding a photo black and grey to the usual CMYK quartet. These clip into the semi-permanent printhead and use Canon’s useful bank of red LEDs to show they’re properly plugged in.


The usual set of Windows and OS X drivers are provided, together with basic support software, including a well thought out disc label designer.

Canon makes reasonably modest claims for the print speed of the PIXMA MG8150, at 12.5ppm for ISO black and 9.3ppm for ISO colour, though, as with the MG6150, they still proved a bit optimistic. Our five-page black text print produced a speed of 7.5ppm and this increased to 9.7ppm for the 20-page document. Printing in fast (draft) mode made little overall difference, as the image processing time stayed much the same.


The five-page black text and colour graphics test gave 5.0ppm, but when we turned on duplex print, standard on this machine, even a black text print only managed 2.9ppm. A single-page colour copy took a best-case 16s and 15 x 10 cm photos took between 34s and 56s, depending on source. 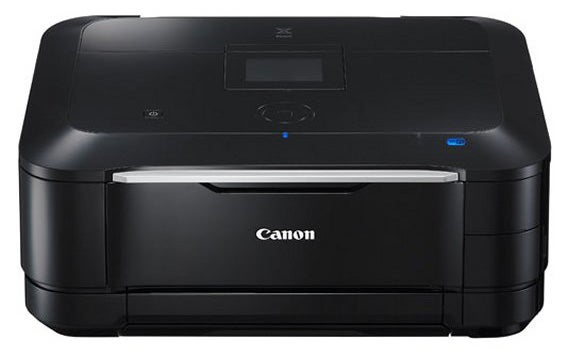 The quality of the prints is pretty good. Black text on plain paper is among the best we’ve seen from any inkjet printer and draft mode text is also very readable. Colour graphics are bright and solid, with good registration of black text over colour and even colour photocopies, while losing some of their depth of colour, are still very usable.


Photo prints, something Canon is rightly renowned for, are natural and well-balanced for colour. Detail in both light and dark areas is accurately reproduced and images are sharp and precise.


There’s only one set of cartridges available for this machine and at the best prices we could find they give running costs of 3.9p for black and 10.5p the colour. The black page cost is about average, but the colour cost is a bit high, compared with rival machines. A high purchase price often means lower running costs, but that’s not true here.


While this is a fine all-in-one, ideal for the home photo enthusiast, it’s hard to see where there’s nearly £75 of extra value, over and above the PIXMA MG6150. The MG8150 has a slightly larger LCD display, a higher resolution scanner and a transparency adapter, but everything else is the same. Still, if you have an archive of traditional slides you need to convert, or work with conventional photography, it may be worth the extra.