Canon’s PIXMA MG6450 looks a bit like a model refresh in the middle of its life-cycle. It’s a home inkjet all-in-one, aimed more at the photo enthusiast or student than somebody running a business from home. It’s a five ink printer with a pigmented black ink alongside it’s photo black counterpart, so that plain paper prints can use the faster drying formulation.

SEE ALSO: Which Printer Is Best For Me? 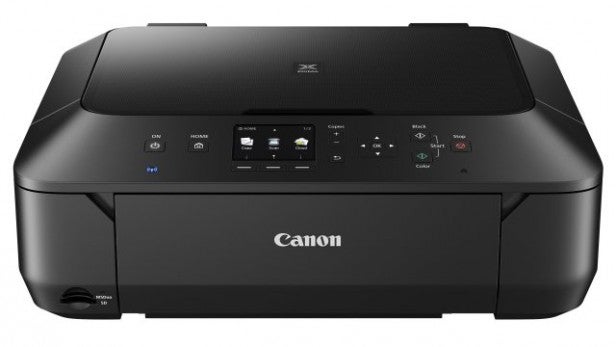 Canon uses a slightly squatter, black-box design, with a 75mm LCD set into its shallowly-raked control panel, the machine looks sleek and smart. The flatbed scanner lid has a pleasant, dotted texture to it and the whole of the control panel lifts up and swings back in a Thunderbirds-like way, to reveal the five ink cartridges sitting in the thermal print head.

The controls themselves don’t include a touchscreen, but the three soft keys in front of the LCD still make control of the machine very straightforward. There are two memory card slots in the front panel of the printer, for SD and MemoryStick cards. 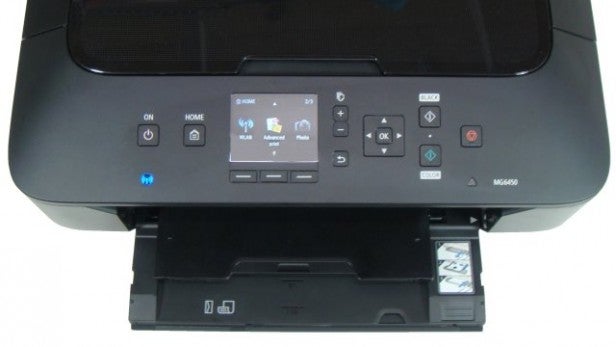 Paper handling is down to the two fold-down trays, the first being the front panel of the printer. This takes up to 100 sheets of plain paper, or photo paper – there’s no separate photo tray. Paper feeds out to a second tray, but is also supported by a swivel-out paper stop from the bottom one. It feels a bit makeshift and gives the printer a big overall footprint.

Software includes the strangely named My Image Garden for simple graphic editing and Easy-WebPrint EX for printing web pages. Installation of the five ink cartridges is a simple clip-in process.

There’s a USB socket at the back, but most customers will go for the wireless connection, as this gives direct links to mobile devices, like Android and iOS, and remote print via PIXMA Cloud Link.