Canon all-in-ones are traditionally black, but the top of the range, photo-friendly PIXMA MG6350 comes also in an icy white, which makes a refreshing change. As top of Canon’s current range, it should have all you could ever want in an all-in-one with photo enthusiast pretensions.

Like its cheaper cousin, the PIXMA MG5450, this is a low-profile printer, but with a comparatively large footprint. It doesn’t have an Automatic Document Feeder (ADF) fitted to its flatbed scanner, so the top is sleek and un-cluttered.

In front of this is a shallowly sloping control panel, centred around an 88mm colour LCD touchscreen, but with dedicated touch buttons to either side, which illuminate through the case when their functions are available. We love this technique, which still feels appropriately Star Wars. 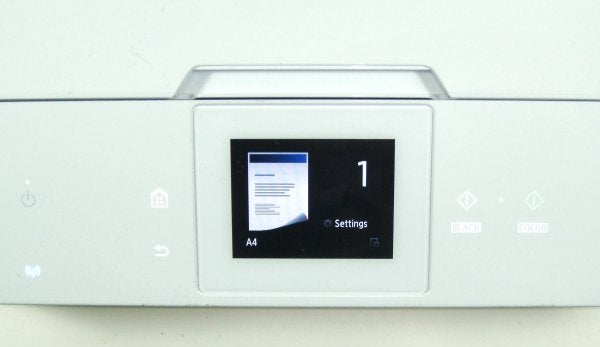 The front panel of the machine folds down, automatically if you forget to open it before printing, and as it does so a paper support swings out from its front edge. This clever arrangement is slightly spoiled by the fact that you have to manually pull out an extension to hold the paper properly.

Below the fold-down panel are two paper trays, cunningly configured so the same indent can be used to pull either of them out, independently. The top one is a 20-sheet photo tray, while the bottom one can take up to 150 sheets of plain paper. 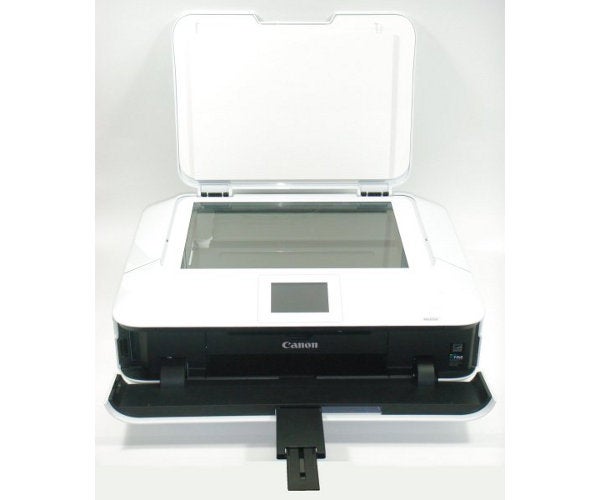 Even though the shallowness of the trays contributes to the low profile of the printer, we’d rather have it a little taller and not have to refill the plain paper tray quite so often.

Clipped to the underside of the photo paper tray is a CD/DVD carrier, which can be slotted in behind a fold-down panel inside the machine for direct printing on this media.

At the back are sockets for 10/100 Ethernet and USB, and the machine also supports wireless connection with convenient WPS setup.

There are six ink cartridges in this machine, including a larger than normal pigmented black for text print and a mid-grey ink to supplement the photo black and improve black and white photo prints.

Getting at the cartridges is novel, as the control panel rises on pantograph hinges, like the lid of a Stormtrooper’s sandwich box. The six cartridges slide into view with their indicator LEDs flashing if any need replacing.

Supplied software is Canon’s usual mix of photo and control apps, including a mirrored L-shape menu which gives quick access to many of the printer’s functions.