At first glance, this mid-priced all-in-one looks much like the PIXMA MG5150, but Canon’s PIXMA MG5250 has significant differences to justify the extra £30 in its asking price.


The shiny, glossy black finish of this machine is all too easy to smudge and scratch – this sample had been out and about and showed both. There are two paper paths: from the upright tray at the rear, which has a pull up and tilt support and from a cassette at the front, which is awkward to get your fingers in. Both have capacities of 150 sheets.


The PIXMA MG5250 can also print directly on suitably treated CDs and DVDs. An internal cover folds down and the supplied disc carrier slides in from the front. The smaller, credit card-sized discs are also supported. 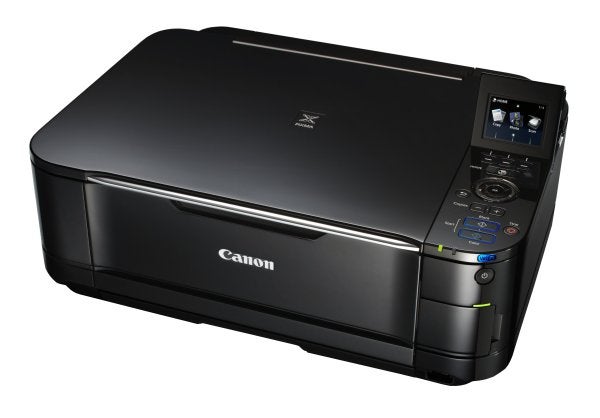 A 60mm colour LCD screen folds up from the rear of the control panel set into the machine’s top surface. This is to the right of the single-page, Contact Image Sensor (CIS) flatbed scanner, which has extending hinges, so it can handle books as well as single sheets.


The main control panel is well-organised and the printer’s operating system has been revamped, making better use of the three soft-function buttons directly in front of the display. There’s Canon’s trademark click-wheel for navigating menus and a well-configured set of auxiliary buttons providing good control of the printer’s functions.


A curved cover folds out from the right-hand front corner of the machine to reveal three memory card slots, including CompactFlash as well as the more normal SD and MemoryStick. xD cards are only supported via a third-party adapter. Underneath the card slots, is a PictBridge/USB socket for connection of cameras and USB drives.


The three main differences between this machine and the Pixma MG5150 are print speed – more of which in a bit – direct CD/DVD print and wireless connection. The wireless connection is easy enough to set up, though selecting characters for a WPA passcode using the click wheel is tedious. There’s no cabled network connection, so you need a wireless router for networking. 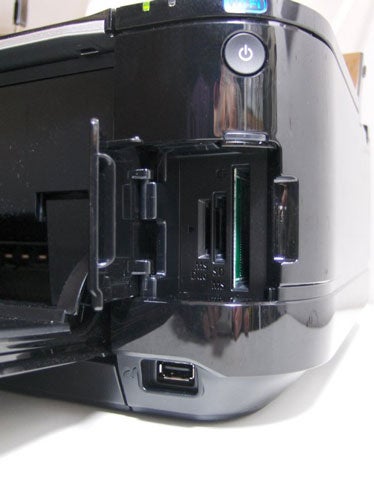 The five ink cartridges, with both pigmented and dye-based blacks, clip into the print head with a minimum of fuss and Canon thoughtfully provides indicator LEDs, showing when they’re properly engaged and flashing when ink is low.


Drivers for Windows and OS X are provided on CD, though there’s no specific support for Linux. An above-average application bundle includes OCR and PDF file creation, Easy-PhotoPrint EX for photo manipulation and Canon’s new Full HD Movie Print, though we can’t help feeling this could use a lot of paper.

Speed is one of the main differentiators between this machine and the PIXMA MG5150, with Canon quoting 9.7ppm and 6.1ppm for that machine, but 11.0ppm and 9.3ppm for this one. In reality, although the figures aren’t what the company specifies, the differences between them are roughly right.


This printer completed our 5-page black text print in 43s and the 20-page print in 2:09, equivalent to speeds of 7.0ppm and 9.3ppm, respectively. The MG5150 produced 7.0ppm and 7.3ppm, so certainly slower on longer documents. The 5-page colour speeds were 3.6ppm for the MG5150 and 5.0ppm here, so again a noticeable improvement on this machine. 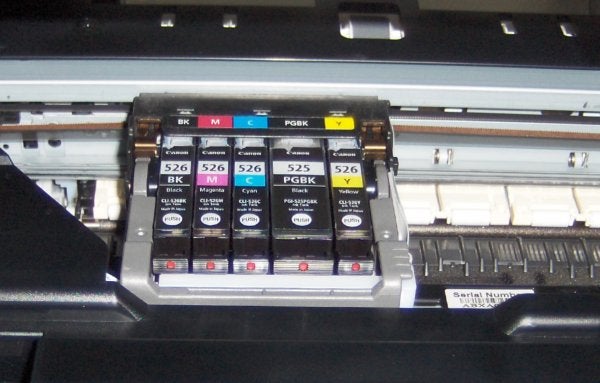 Duplex print is very slow on both printers, with this one producing a speed of 2.8 sides per minute, and the cheaper machine offering just 2.1spm. A full-page colour copy was a lot faster on the MG5250, competing in just 22s, when it took 43s on the MG5150. Similar improvements were apparent when printing photos, where this machine printed a 15 x 10 cm photo in 53s from a PC and just 32s from an SD card.


Print quality is as good as ever from a Canon machine, with clean cut, densely black text, bright, attention-grabbing colour graphics and natural, well-coloured photos. Colour photocopies are impressively close to the originals and the only place the printer falls down is when printing duplex pages. It then appears to use its dye-based black ink, which isn’t nearly as dense or black as the pigmented one. 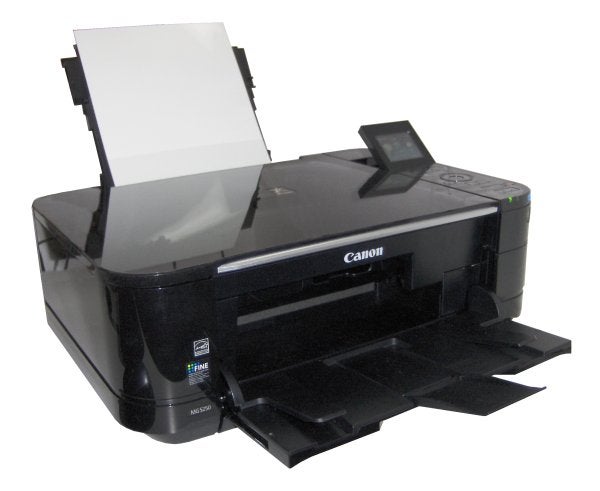 The five ink cartridges are only available in one capacity, though you can buy a twin pack of the pigmented black ink and a triple pack of the three main colours. Using the best prices we could find gives a cost per page of 3.6p for ISO black and 8.9p for ISO colour. These put it pretty much in the middle of the range of running costs for mid-range all-in-ones, a little higher than some on black print and a penny or so lower on colour.

Comparing the Canon PIXMA MG5250 with its cheaper stablemate shows that, in this case, you get what you pay for. The extra £30 buys you a noticeably faster printer, which also supports wireless network connection and direct print on CDs and DVDs. Print quality is generally very good, though duplex black print is a bit insipid and print speed is also good, though again duplex results are weaker.