Although all-in-one printer sales outstrip single-function printer sales several times over, there are still plenty of situations where a conventional printer is the right choice and you can save money, if you don’t need the scanning and copying functions. Canon’s PIXMA iP4580 is slightly more than a single-function printer, as it can print on plain paper, photo paper and directly onto coated CDs and DVDs.


It’s another of Canon’s high gloss, piano black boxes, with a silver band around its chamfered top edge. You’ll need to keep a clean duster to hand if you want the printer to maintain its pristine looks. 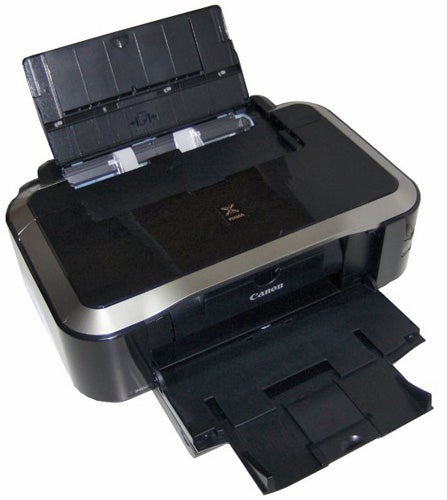 There are two main paper paths, from a telescopic, fold and lift tray at the rear and a paper cassette that pushes in and projects from the front. Both these sources can take 150 sheets of plain paper, though Canon suggests you leave the rear tray for photo paper. This makes sense, as you can then leave the rear tray closed most of the time, which helps keep dust out of its mechanism. The output tray is another telescopic support, formed from the inside of the fold-down front cover.


The only controls are set into the heavily curved right, front edge of the machine and consist of two buttons, each with inset, coloured LEDs. One is for power and the other for paper feed. Below the buttons is a PictBridge socket, so you can print from most digital cameras, using the camera display to select images. 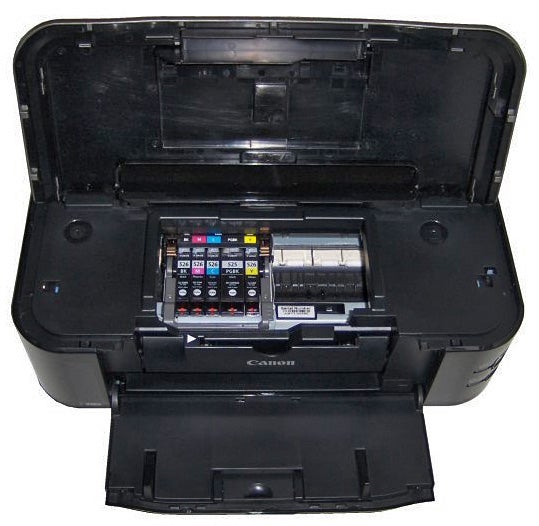 The only data connection to the PIXMA iP4850 is a single USB socket at the rear and the suite of Windows software includes Easy PhotoPrint and CD LabelPrint, with equivalents for Mac owners, too.


The CD/DVD print software is particularly easy to use and works much like a simple desktop publishing application for importing and positioning images and text. Flip down an internal cover just behind the printer’s front cover and it provides a support for the CD/DVD carrier, which can take regular and mini discs, as well as the smaller, credit-card sized ones.


The machine uses five individual ink tanks in a semi-permanent print head, with two black inks for text on plain paper and photos. They all snap easily into place and are equipped with Canon’s handy LED indicators, which show when the cartridges are properly located and flash when ink is low, so you can tell at a glance which need replacing.

Canon makes more realistic claims than most for the speed of its printers and expects this machine to reach 11ppm for ISO black pages and 9.3ppm for ISO colour ones. Our five-page, black text document produced a speed of 7.32ppm, which only increased to 8.1ppm for the longer, 20-page test. A fast, draft mode print tipped in at 8.3ppm, not that far off the claimed speed.


Colour prints were also reasonable, with a five-page document giving 5.9ppm. Although they fall a little short of the claimed figures, they’re reasonable speeds from a comparatively low-cost printer. 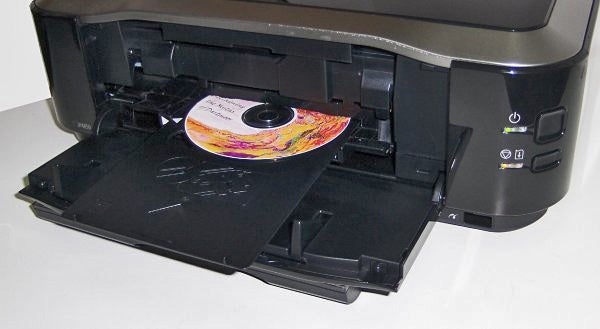 Where the machine drops back is in duplex print, which is a standard feature. All inkjets have problems with drying times when printing on both sides of the paper, but Canon has one of the longest pauses between sides of any make we test. Here, it took 6mins 56secs to print the 20-page document as a 10-page duplex one, a speed of just 2.9 sides per minute.


A 15 x 10cm photo printed from a PC completed in a good 46s at best quality, though from a PictBridge camera, in normal mode, to took a less-impressive 57s. 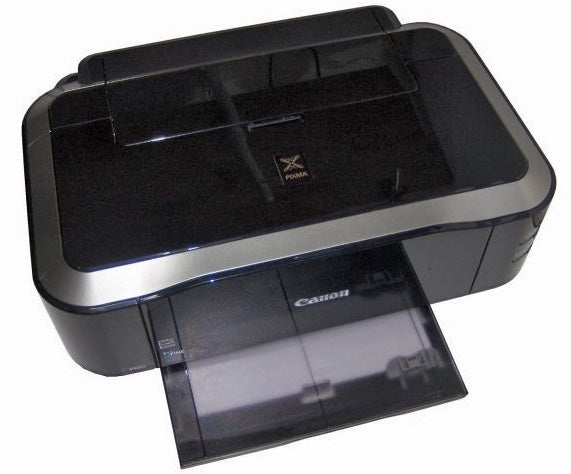 Print quality from Canon printers is usually impressive, but here black text is a little more fuzzy than usual, showing some flow of ink along the grains of the paper. Colours are better defined and black text over coloured backgrounds is sharp and well registered. Solid colour fills are smooth with no signs of banding or dither patterns.


Photo prints are also well defined, with smooth gradations in skies, but darker areas are over dark and some detail is lost. Colours are natural, but there’s plenty of vibrancy, too, when needed.


The five print cartridges only come in one capacity, which makes page cost calculations simple, but gives no discount to people who are prepared to invest in higher capacity consumables. Using the best prices, we could find gives ISO page costs of 3.1p for black and 8.3p for colour. These are both better than average when compared with the printer’s main rivals.


If you don’t need the extra functions of an all-in-one printer, or want to spend money on print quality rather than print features, Canon’s PIXMA iP4580 is a good, workaday machine that produces excellent prints, quickly and at reasonable cost. There’s nothing much that’s new about the printer, but the mix was already pretty good.