Although all-in-one printers now substantially outsell single-function machines, there are several reasons why you might not want to go the multi-function route. Single function printers, like Canon’s PIXMA iP4700 reviewed here, are smaller than equivalent all-in-ones and quite a bit cheaper to buy, too. It could even be that you already have a scanner, so wouldn’t need to buy a printing device with one built in.


The PIXMA iP4700 is a tad smaller than the MP and MX range of Canon all-in-ones, but still couldn’t be described as small. With its high-gloss black top, side and front panels, it’s quick to take fingerprints, but is still smart for all that.


It has several of the design elements of its all-in-one siblings, including the twin paper trays. A flap at the back of the top cover folds up and extends to become a 150-sheet rear paper tray and there’s a 150-sheet cassette, which slides in under the machine, too, though it still extends from the front of the machine. Canon recommends you load photo paper into the rear tray and plain paper into the cassette, but the rear tray will take either.


The front panel of the machine folds down and extends to become the output tray and there’s an internal fold-down cover that opens to reveal a slot for inserting the CD/DVD carrier, as the machine can print directly on suitably coated discs. 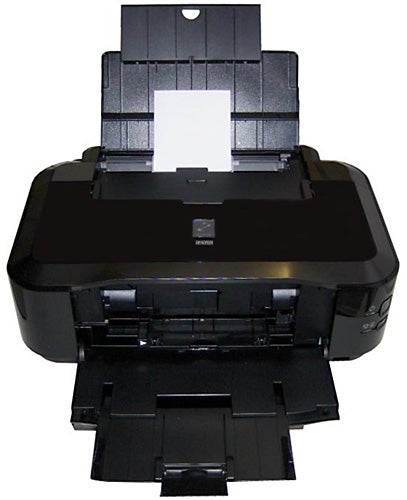 Controls and indicators are minimal, with a power button and light set into the heavily curved right-hand front corner. There’s a feed button and indicator directly below this, but that’s it for physical controls. There are no memory card slots, which is a shame on a machine that is good for photos, but there is a PictBridge socket. At the back is a single USB socket, the only computer data connection on the PIXMA iP4700.


Canon provides its standard suite of support applications, including a Web print facility that automatically adjusts the width of web pages, so they fit on the paper. Drivers for Windows and OS X are provided, but there’s no mention of Linux compatibility.


The printer uses Canon’s well tried five-ink print system, with two blacks including a pigmented ink for better text print on plain paper. They all clip into a semi-permanent print head and the machine performs automatic head alignment on request.

Canon deserves extra brownie points for quoting speeds according to the ISO standard, which gets a lot closer to what you actually see than some of the ridiculous box hype from its rivals. The company claims 9.2ppm for black pages and 8.1ppm for colour ones.


Our five-page black text document completed in 44 seconds, giving an actual print speed of 6.82ppm, and the longer 20-page test piece took 3mins 1sec giving a slightly reduced speed of 6.63ppm. It’s unusual to have a longer document producing a slower speed, but this can be explained by random pauses, presumably for print head maintenance, which were more prevalent on the longer run. 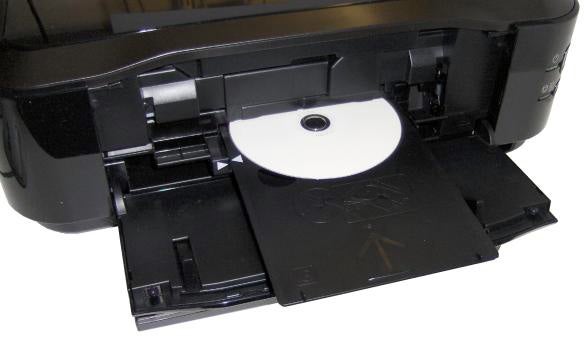 The 5-page black text and colour graphics document produced a speed of 4.76ppm and when we switched in the printer’s duplexer, this dropped to 2.95 sides per minute. Photo prints are particularly quick, with a Standard quality print coming through in just over 30 seconds, well up with the best in the business.


All these speeds are good for a printer costing just over £80 and they hold up well against printers and all-in-ones from other suppliers, which cost quite a bit more.


The plain text print quality isn’t quite what we’ve come to expect from Canon. Our test samples showed there’s some fuzziness to the characters, caused by a little bleed of ink into the paper fibres. Canon usually has this well under control through its well-formulated pigmented ink, but it doesn’t seem quite as good from this printer.


Colours for business graphics are bright with only subtle dither patterns. Text registration over colour is also good with no visible signs of white halos.

Photo prints on Canon’s glossy paper are reproduced well with natural colours and smooth colour gradations, though darker areas of images are a bit too dark, losing some detail. There’s little point in going for the slightly slower High quality print as differences between this and Standard quality are very difficult to see.


The five ink cartridges are the only running costs in this machine and are available at very competitive rates if you shop around. We calculate page costs for an ISO black page at 3.16p and for a colour one, 8.18p, both figures including 0.7p for paper. Comparing the costs with the similarly priced Epson Stylus Photo P50, the black print cost is slightly higher, but the colour print is a full 2p per page less.


The Canon Pixma iP4700 is a good quality, general-purpose inkjet printer with a penchant for photo printing. It’s quick, cheap to run and has useful extra features like a duplexer and CD/DVD direct print. Black text print wasn’t the best we’ve seen from a Canon machine, but is still perfectly adequate for day-to-day print tasks.