Canon has an enviable reputation for inkjet printers and all-in-ones and its printer range starts at under £50. The PIXMA iP2702 is an upgrade to the PIXMA iP2600, the main differences being the ink cartridges and software bundle, plus an external case redesign.


The design of the printer is clean and unfussy. A textured black top surface rises to a smooth plateau, formed by the gloss black back of the paper tray. This tray lifts up to reveal paper guides for A4 sheets, though the machine can also print on sizes down to 15 x 10cm.

There’s no output tray and printed pages feed out to the desktop, which can be awkward if it has a smooth surface, as sheets tend to float and not collect in a neat stack. There are two control buttons, each with inset LEDs, set into the right-hand end of the top panel, one for power and the other for paper feed and error conditions.


The only sockets at the rear are for mains power and USB data connection – there’s no network support either wired or wireless on this machine. The mains cable plugs straight into the printer, though, without a separate power supply. Only HP still feels the need to have power ‘bricks’ kicking around under the desk.


The top and front covers hinge up as one to provide access to the twin ink cartridges; when you lift the cover, the head carrier slides into a convenient position, so you can clip them in. 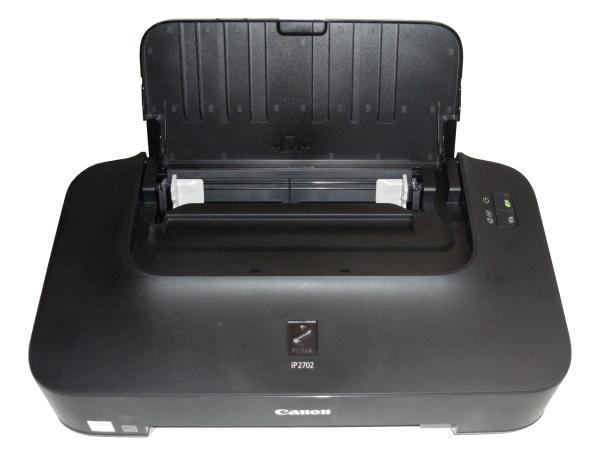 Canon provides basic but useful support software with the PIXMA iP2702. This includes the Easy-Photo Print and Easy-Web Print utilities, with the latter providing organised printing of Web pages and components of them. Easy Photo-Fix II is also included, for automatic fixes to common photo problems.


Drivers are available for all versions of Windows from 2000 right through to Windows 7 and for OSX from 10.4.11. There’s no explicit support for Linux.

Canon is brave in quoting realistic, normal mode print speeds for its machines, as most of its rivals still go for unhelpful, draft speeds. For this machine it claims 7.0ppm for black print and 4.8ppm for colour. These are using parts of the ISO standard which exclude processing time before start of print, so are still slightly unrealistic.


In the real world, where you have to wait for both processing and print before you can use a document, you’re more likely to see times and speeds like those we found. Our 5-page, A4 text document took 50 seconds to complete, giving a speed of 6ppm. Slightly strangely, the 20-page document, which involved a lot of pre-print ink housekeeping, completed in 3:27, a slower speed of 5.8ppm. Both these figures are a little slower than the claimed speed, but are reasonable for an entry-level inkjet printer.


The machine didn’t do quite as well with the black text and colour graphics print, though, returning a speed of 2.4ppm, only half the claimed rate. It’s still roughly on a par with its main competitors, though. In high quality mode, a 15 x 10cm photo print on Canon’s Photo Paper Pro II took 1:19, but in standard mode this time reduced to 51 seconds. 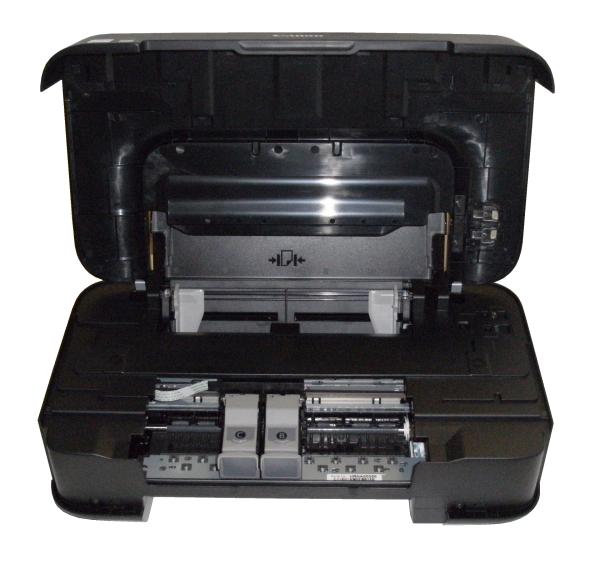 This is quick for a photo print and there’s not a lot of difference between prints from the two modes. The Standard mode print is a little darker and some detail is lost in the shadows, but both are generally very good, with no noticeable colour cast and smooth colour gradations in areas of sky.


Colour graphics are also well printed, though there are some noticeable dither patterns in some lighter colour fills. Colour prints on plain paper are generally bright and attention grabbing and black text is very clean and sharp. There’s nothing in the print out to make you want to look closer for signs of ink bleed.


Most Canon printers are commendably quiet, but the iP2702 has the ignominious honour of being the noisiest printer we’ve ever tested. It’s quiet enough while printing but, as usual, little effort has been made to reduce the noise made by the paper feed mechanism. We clocked this at peaks of 80dBA at half a metre. According to the Workers’ Compensation Board of British Columbia (PDF warning), that’s the kind of noise level you can expect from a motorbike or a private aircraft and is certainly very disruptive if you have the printer beside you on the desk.


There are only two cartridges in this machine, one black and the other tri-colour, though both are available in two yields. Using the high yield version for both black and colour cartridges produces costs per page of 4.5p for ISO black and 9.8p for ISO colour, both including 0.7p for paper. These costs are quite high, though the black print cost is higher in comparison to rival machines than the colour one.


There’s no doubt you can get good quality print from the PIXMA iP2702. There’s also little doubt that it’s a basic device, a bit pricey to run and one which should come with a set of ear defenders. It’s about time printer makers considered noise levels, along with the looks and features, of their machines.