Canon’s MD160 is one of only three consumer-oriented DV camcorders the company still sells in the UK. It’s actually the flagship of the range, unless you spend thousands for one of the professional models. However, Canon is assuming that enthusiasts will be looking towards different formats, so this is very much a point-and-shoot model, with a £200 price tag and tiny palmcorder dimensions to match.


As with most camcorders at the low end of the price scale, the MD160 is based around a tiny sensor – in this case, a 1/6in CCD with 1.07Mpixels. This provides the ability to take stills up to 1,152 x 864, with an SDHC slot integrated to record them onto removable storage. This is not exactly going to even give your camera phone a run for its money, though. 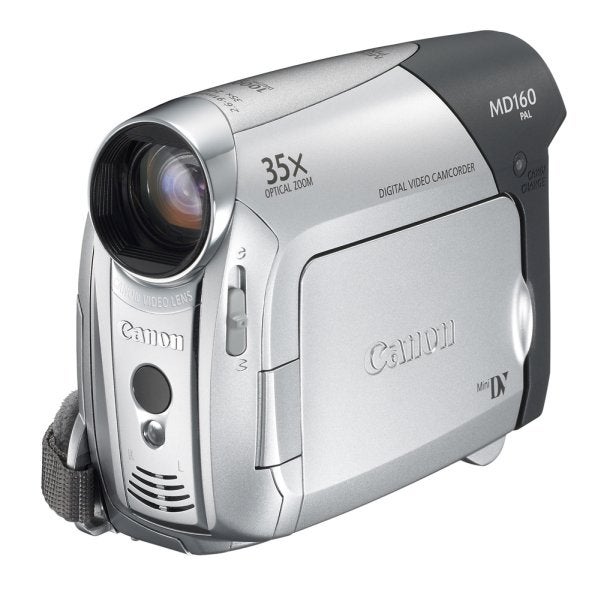 The MD160 isn’t packed with features, either. There is no accessory shoe, and no microphone or headphone jacks are provided. The lens doesn’t have a screw thread, so you can’t fit any filters or adapters to expand your shooting options. Tapes load from the bottom, too, so you will need to unscrew the camcorder from your tripod’s quick-release plate to change tapes. Not surprisingly at this price, the image stabilisation is the less effective electronic version rather than optical.


Our feelings are rather negative about companies quoting huge numbers for digital zooms, as these blow up the image digitally to achieve the magnification, which reduces resolution. But the MD160 sports a whopping 35x optical zoom, which is about the largest we’ve seen on any consumer camcorder. It also has a built-in lens cover operated by a slider, which will save you from having a plastic disc flopping around when you’re shooting.

The only way to get to manual focusing is via the joystick, which won’t make it easy to adjust focus accurately, or quickly. But it is relatively accessible without having to delve deep into the main menu. You can’t access aperture directly, either. Instead, an exposure control is provided which steps from -11 to +11, and works both iris and shutter together. However, you can also lock the shutter between 1/6th an 1/2000th, which effectively means the exposure control varies the iris alone. This requires a trip into the main menu though, where exposure and focus can be accessed with a few simple joystick movements.


So, whilst Panasonic offers a bit more control in its consumer camcorders, with direct iris adjustment, the Canon isn’t too bad. It doesn’t provide any video gain, though, which can be useful to make the most of poor lighting. The MD160 does offer Canon’s usual array of electronic image enhancements, including Vivid, Neutral, and Soft Skin. Program Auto-Exposure modes consist of Portrait, Sports, Night, Snow, Beach, Sunset, Spotlight and Fireworks – a pretty comprehensive assortment. The ability to mix in a still image from the SD memory card and a selection of digital video fades are also available, for those who have no intention of editing on a computer, where such effects are much more flexible. 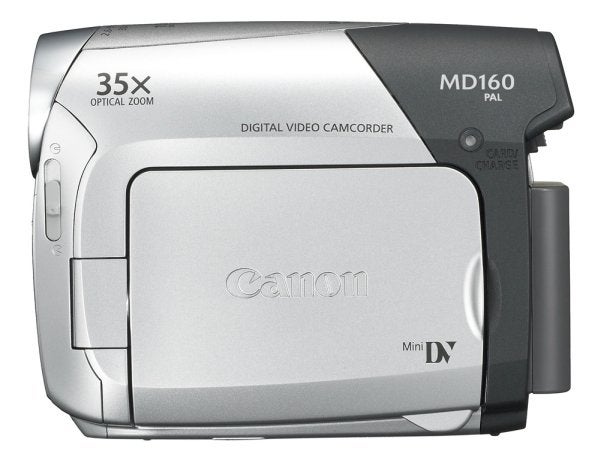 The MD160 also sports a built-in video light provided by an LED on the front. This does make it possible to shoot in darkness over short ranges, but it isn’t very strong. So the image is effectively monochromatic – better than nothing, but no replacement for a proper video light. Not that you would be able to attach one anyway due to the lack of an accessory shoe.


We weren’t expecting stellar image quality from a £200 camcorder with a 1/6in CCD. In bright sunlight, the MD160 provides heavily saturated colour, a common trait at this price point as consumers like their video to be colourful. The image was a little fuzzy, but noise was lower than is usually the case for a 1/6in CCD. Clearly, the DIGIC DV image processing was doing its job satisfactorily.


In lower light, noise did begin to be an issue, although the image was still reasonably sharp in adequate indoor illumination. But this quickly tailed off as the light levels were dropped. Where premium consumer models such as Canon’s stunning HV20 can still maintain colour even with just a table lamp for illumination, the MD160’s video became almost grey. The amount of video noise was nearly intolerable, and the camcorder even had problems focusing. So the MD160 would be perfectly adequate for capturing family moments outdoors and in a brightly lit room, but night shooting will be out of the question, unless you turn on the LED video light. 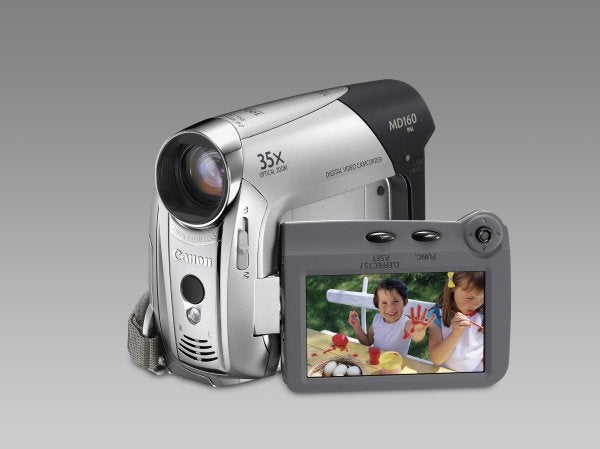 Being DV, the MD160 enjoys about the widest range of editing options currently available. Absolutely any editing app will cope with the footage. Canon provides the ubiquitous FireWire port, which has input enabled as well as output so you will be able to record your edits back to tape. A USB port is also available, and a minijack, which bundles audio and composite video – but output only. So you won’t be able to use the MD160 to record your old VHS tapes to DV, which is a shame.


After the plethora of all-singing high definition camcorders we’ve seen over the last few months here at TrustedReviews, it would be very easy to look very poorly on the MD160’s average image quality and mediocre range of features. But for £200 you can’t expect a semi-pro’s dream. This is not a camcorder for anyone hoping to shoot anything more than a few family moments. But for that purpose it does an adequate job, and at least it offers a reasonable set of manual controls and decent performance in adequate light. As a last gasp for DV, there are worse options around than Canon’s MD160.