The LEGRIA mini isn’t exactly burgeoning with manual settings, unlike most Canon camcorders. Apart from auto mode, there are scene presets for Food and Fashion, Sports, Night Scene, Beach, and Snow, plus Macro mode and a Programmed AE option. The latter allows you to choose between daylight and tungsten white balance presets, or fully manual. You can also adjust exposure between -3 and 3 EV in increments of 0.25, or choose a point within the frame as reference.

But there is no option for manual focusing – the focus is essentially infinite from 40cm onwards. There are also no options to alter the aperture or shutter speed. But you can record a frame at intervals of five, ten, or 30 seconds, or one or ten minutes. These will then be stitched together into a time-lapse recording. Alternatively, the video snapshot mode grabs a few seconds of video each time you press record, a bit like Vine.

If you want to position the camera upside down it can be set to detect its orientation and rotate the frame accordingly. Canon also offers a variety of creative effects. You can superimpose animated stars, bubbles, musical notes and other graphics over your scene as you record. You can also draw on the frame either before or during recording. We have never been fans of these kinds of in-camera effects, but they make a little more sense with the LEGRIA mini. 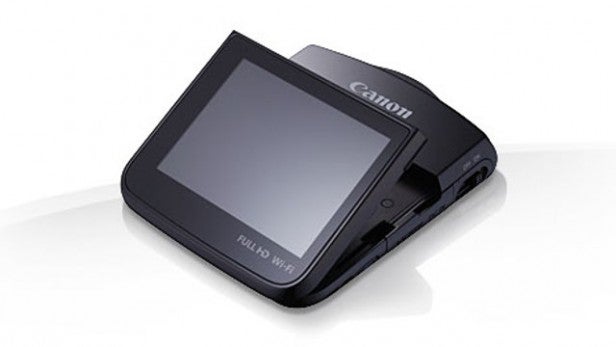 Another key feature of the LEGRIA mini is its Wi-Fi connectivity. This is essentially the same as that provided with Canon’s other Wi-Fi-enabled camcorders, such as the Canon LEGRIA HF R46. In recording mode, you can connect your Android or iOS smartphone via a free app, and remotely control the camcorder. The app lets you trigger recording on the camcorder, or stream video onto the smartphone. 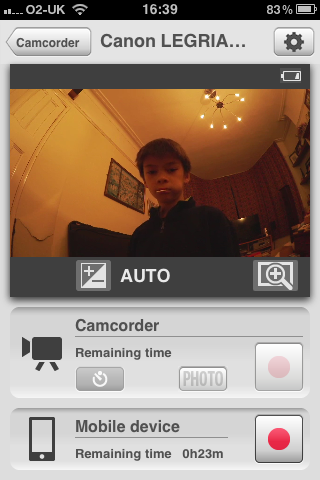 However, in recording mode you can only connect to the camcorder directly via Wi-Fi – you can’t hook it up to an existing WLAN.

This means there is no live streaming over the Internet available, unlike with the JVC ADIXXION GC-XA2, which we feel is a grave omission for the intended user. You can use an existing WLAN in playback mode, though, so it’s possible to view recordings on another smartphone app, via a browser, or even via DLNA on a smart TV. You can also upload directly to YouTube and Facebook.

One area where the Canon LEGRIA mini punches clearly ahead of the candy-bar camcorders and smartphones is image quality. In broad daylight, the image is very clear, with excellent colour fidelity. We found the auto white balance didn’t cope that well with gloomier indoor conditions, although the tungsten preset put this right.

Once this was enabled, the LEGRIA mini performed very well in low light. If you plan to record yourself in non-ideal artificial lighting conditions, it’s clearly more than up to the job. However, although the built-in microphones are decent, there is no facility to connect an external microphone.

Should I buy the Canon LEGRIA mini?

If you do fancy making videos where you are the presenter, the Canon LEGRIA mini does have some specialist abilities that make it a better choice than a lot of mainstream camcorders, or just using your smartphone or a web cam. The video quality will be noticeably better than a phone, particularly in low light conditions, and the flexible screen will allow you to ensure better framing, too.

However, the LEGRIA mini is the same price as an entry-level mainstream camcorder, such as the Canon LEGRIA HF R406, making this a rather niche product. The camcorder market is constantly having to reinvent itself these days, with the Flip, action cameras and smartphones all providing reasons why a mainstream camcorder isn’t worth buying. The LEGRIA mini is a valiant effort to provide a camcorder for the way people are now shooting video in the Internet age, but it’s not entirely successful.

The Canon LEGRIA mini is a bold innovation that will find some friends in the video blogging community, but the lack of live streaming is a serious omission for the intended user.