A couple of years ago, Canon was setting the benchmark for HD camcorders, with the seminal HF10 and its derivatives. But the 2009 Legria selection fell between two stools. The HF S10 was too costly at launch, and the HF20 didn’t have the same image quality as Canon’s 2008 models. So now we’re well into 2010, can Canon’s latest high-end offering, the Legria HF S21, redress the balance?


The new model has a lot in common with the HF S10. In particular, it’s built around the same large 1/2.6in CMOS sensor with a gross 8.59-megapixels, 6.01-megapixels of which are used for video and 8.02-megapixels for still images. Canon doesn’t add any interpolation, so the maximum still image resolution is 3,264 x 2,456 pixels. There are no changes to the recording formats available, either. The HF S21 records Full HD AVCHD at 25 frames/sec up to the top rate of 24Mbits/sec. An interlaced signal is used, but Canon’s 25PF mode is available to encode true progressive frames within.


With so many excess pixels available for shooting video, Canon has put them to good use with its Digital Tele-Converter. This adds an extra 1.7x multiple to the relatively modest 10x optical zoom, for a much more impressive 17x total. Unlike a pure digital zoom, the Digital Tele-Converter doesn’t involve a loss in resolution, although there are also 40x and 200x digital zoom options if you do feel you can tolerate this. But we wouldn’t advise it.

Whilst the core specification is the same, there are key areas of improvement with the new model. The on-board memory has been doubled to 64GB, and there are now two SD Card slots instead of one, both of which support SDXC. So the maximum storage available would be 192GB, with both slots populated. Even at the top video data rate, that would be enough storage for 18 hours of footage.


The LCD has also grown from 2.7in to 3.5in, with 922,000 pixels of resolution, and acquired touchscreen capabilities. In tandem with Canon’s Multiangle Vivid LCD technology, the display is clear and viewable even in quite bright conditions. And when it isn’t, there’s now an electronic viewfinder available as well, which extends from the rear sufficiently for comfortable usage.

Like the Legria HF M31, most of the functions are now accessed via the touchscreen. You can immediately call up a touch-operated focus and exposure mode, or head to the various menus. There are onscreen controls available for operating the zoom and toggling record. However, whilst the zoom buttons are on the edge and quite easy to access, the record button has been placed inexplicably near the camcorder body.


In manual mode, Canon’s usual array of configuration options become available via the touchscreen. The Function button calls up two pages of buttons, providing direct access to white balance, microphone levels, plus focus and exposure controls. The latter can be operated by onscreen sliders or by touching a point in the screen, although the presence of extra touch-operated controls around the frame edge means the active area is merely a central rectangle, not the entire frame. The manual focusing control has a peaking option, whilst manual exposure offers zebra, and can be set to lock on average levels or highlights. 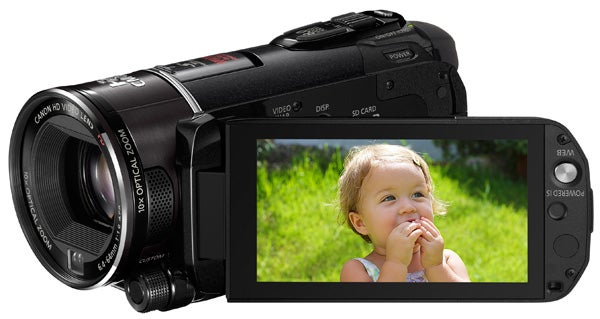 There is also a button to toggle between Canon’s various program modes. As well as the general Programmed AE, there are shutter and aperture priority options, the usual array of scene modes, and cinema colour. The shutter can be varied from 1/6th to 1/2000th, and aperture from F1.8 (at maximum wide angle) to F8. As usual with Canon camcorders, you can’t adjust both separately. But the general Exposure setting remains available, providing similar functionality.


Separate touchscreen menu buttons are available to switch between Automatic gain control and manual boosting up to 24dB, as well as for turning on the pop-up video light or Pre REC buffering mode, and toggling between dynamic, standard and no image stabilisation. The Powered image stabilisation mode has its own dedicated button on the edge of the LCD bezel. There are six digital effects available, too.


The HF S10’s main innovation over the HF10 generation also remains. There’s a knob next to the lens that by default operates the manual focus, with a button on the front to activate it. However, you can also customise the knob to operate exposure, shutter, mic level or AGC limit. The fineness of control is nowhere near that of a full lens ring, as sported by Panasonic’s top-end models such as the HDC-TM700, and you would be hard pressed to execute a smooth rack focus effect using the knob. But it still makes rapid adjustment of various manual settings both easy and quick.

Further enhancements have been made to the stabilisation modes. Like many other manufacturers, Canon has added more powerful image stabilisation on top of the standard implementation. The Dynamic mode improves slow shaking, whilst the Powered mode does a better job when the vibrations are more violent. Strangely, unlike Panasonic’s new stabilisation system, the most powerful option isn’t always the best overall, since the Powered mode is not as good as the Dynamic one for mild undulations. 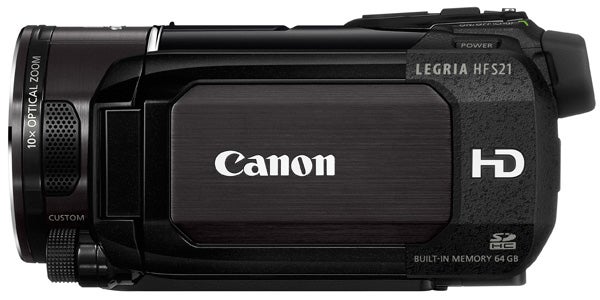 All the usual enthusiast features are present and correct, including minijacks for headphones and an external microphone. However, whilst an accessory shoe lurks under a sliding door, this is Canon’s “S” Mini Advanced Shoe, so won’t accept standard peripherals. The Legria HF S21 is quite a large camcorder in its class, weighing 100g more and measuring 10mm extra in each dimension compared to Panasonic’s HDC-TM700. This doesn’t make it any less comfortable to use, but we’d recommend using a dedicated camcorder bag rather than stuffing it into a general one. 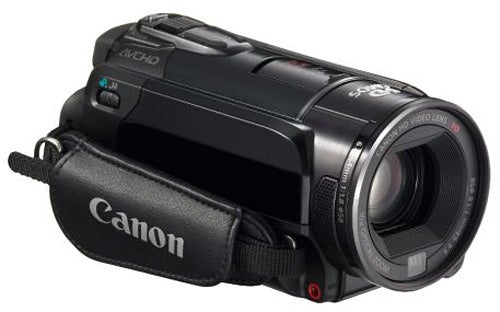 Although it has the same sensor and image processing engine as the Legria HF S10, the HF S21 shows slight improvements in image quality. In the best lighting, there’s no discernible difference, and performance is equal to or better than any other consumer camcorder currently available. But the image looks marginally brighter in low light compared to the previous model. The picture is still slightly darker than some competitors, in particular Panasonic’s HDC-TM700 and JVC’s Everio GZ-HM1. However, the HF S21’s 25PF mode allows the shutter to drop to 1/25th even in auto mode, for a noticeably brighter image than the competition, with no sign of extra grain.


Fortunately, the most important thing the Canon Legria HF S21 doesn’t have in common with the HF S10, at launch, is price. It’s still on the costly side, coming in at around a grand. But this is much closer to the competition, making the HF S21 a much keener option. Whilst we’d still opt for Panasonic’s HDC-TM700 due to its exceptional manual control, thanks to its lens ring, the HF S21 comes close in most other respects.