The Canon LEGRIA HF R406 is a budget-conscious HD camcorder with some higher-end features that single it out from the crowd. Canon has traditionally had more persuasive products at the middle and higher end of the market. But the R406 has a few features that could make it more compelling than some of its budget predecessors.

For a start, the Canon LEGRIA HF R406’s spec is reasonable at this price. There’s a 1/4.85-inch CMOS with 3.28Mpixels, 2.07Mpixels of which are used when shooting video. This is precisely enough for Full HD. The R406 supports AVCHD 2.0, so offers Full HD quality settings up to 28Mbits/sec at 50 progressive frames per second. However, you can also record MP4s at up to Full HD with 50 progressive frames per second and a 35Mbits/sec data rate. There’s a 720p mode, too, for when you really don’t need 1080p resolution.
Footage is recorded to SDXC memory card, with a 32GB module enough for around two hours of footage at the top 35Mbits/sec MP4 data rate. The R406 can only capture stills at 1,920 x 1,080, in JPEG form, though. So the LEGRIA HFR406 is no digital camera crossover device, merely a camcorder that can grab the odd Web-oriented image when required, although some camcorders in this price range don’t even offer this facility. 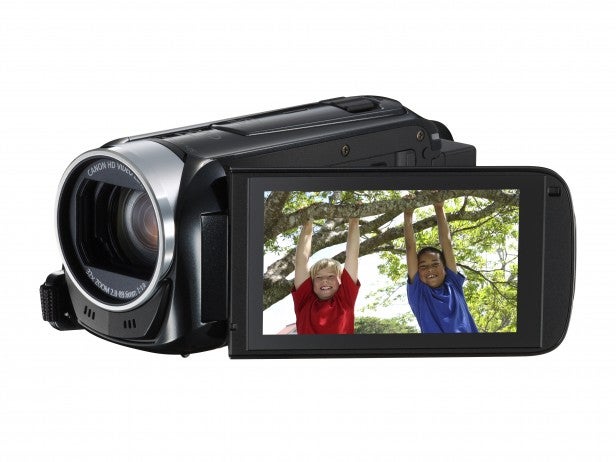 The relatively small sensor means the HF R406 has a decent 35x optical zoom. There’s a 53x Advanced option, too, although these systems usually take advantage of spare sensor pixels. As the R406 doesn’t have a hugely high-resolution sensor, the Advanced zoom doesn’t have a lot to play with here, although it won’t reduce quality like the ridiculous 1,060x digital zoom. Still, a 32x optical factor is more than adequate, and you would be hard pressed to keep this level of zoom stable hand-held anyway, even with the best image stabilisation in the world.

The primary image stabilisation system may not quite meet this high level, but it is optical, which is commendable at this price, and we found it about as effective as Panasonic’s latest camcorders. The Canon LEGRIA HF R406’s stabilisation is implemented as Intelligent IS with Advanced Dynamic Mode, which detects the kind of vibrations being experienced and selects between four different options, with the Advanced Dynamic Mode in particular adding roll and tilt compensation that smooths out shooting when walking – again, very effectively in our testing, although not quite as effectively as Panasonic’s. However, the lens cover is manual, using a slider on the side. 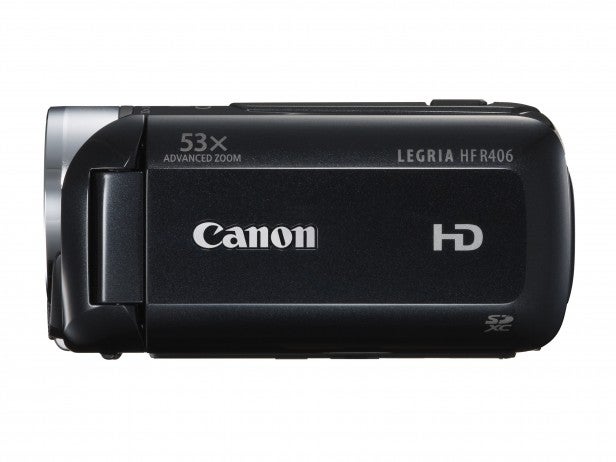 While the HF R406 has a decent level of creative features, which we will be covering shortly, this model is clearly aimed at the point-and-shoot consumer, and nothing could illustrate this more than the Baby Mode. This lets you stamp your videos with graphics illustrating event markers like date, time, a certain age, height or weight, and stores the videos you shoot in this mode in a special collection.

These options are among Canon’s Decorations, which give you tools to superimpose graphics over your video as it is recorded. You can draw freehand lines, and add animated stamps including stars, circles, musical notes, and fluctuating pixels. We would always recommend adding these kinds of effects at the editing stage, as recording them in-camera means you can’t remove them if you don’t like the end results. But if you never plan to do any serious video editing, they can be fun.