With its own-brand lens heritage, Canon has been one of the biggest players in digital stills cameras for years. Canon camcorders have had a similar heritage in the past, but since the HF100 led the pack for technology, the company hasn’t quite managed to get a winning combination of cost and features. Price has been a particular difficulty, so it’s great to see the LEGRIA HF R26 available for £250. But this is not quite a rock-bottom budget shooter.

For a start, whilst camcorders in this price range often rely on a tiny 1/6in CMOS, the R26 offers a slightly larger 1/4.85in sensor, with 3.28Mpixels. Size does matter where a CMOS is concerned, as a larger unit means greater light sensitivity, although the R26 doesn’t further enhance this with back-side illumination technology. Video recording is exclusively in HD, at data rates ranging from 5Mbits/sec to 24Mbits/sec, the highest available for the non-2.0 version AVCHD format that the R26 uses. The top two quality modes operate at Full HD, whilst the rest switch to anamorphic 1,440 x 1,080 instead, the same as the tape-based HDV format. You can also select either 50i or Canon’s PF25 modes. The former is the standard interlaced format, whilst the latter records progressive video inside a 50i video format. 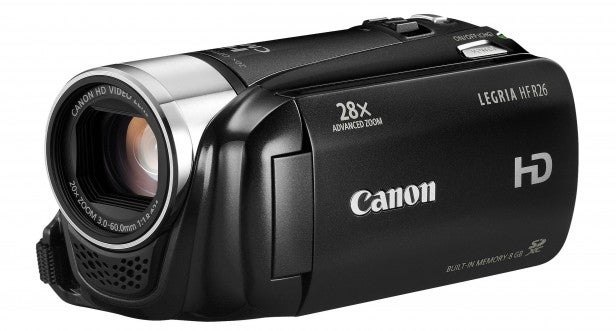 Despite being a budget camcorder, the R26 still incorporates 8GB of memory, which is a useful amount to get you started but will definitely mean upgrades will be required sooner rather than later. At the top quality setting, the camcorder only has room for around 45 minutes of footage on board. Fortunately, the R26 also offers two SDXC-compatible SD card slots. With 64GB media in each, a total of 136GB would be possible – enough for nearly 13 hours of top-quality footage.

Being a budget model, the R26 isn’t exactly brimming with features, but
it does have enough to put it above the bargain basement. There’s a
healthy 20x optical zoom, which can be boosted to 28x in Advanced mode.
This crops into the frame slightly, taking advantage of surplus pixels,
so doesn’t degrade image quality like a traditional digital zoom. Unfortunately, the image stabilisation ”is”
somewhat budget-oriented, being electronic rather than optical. It does
at least offer a Dynamic mode, which can compensate for the kinds of
motion caused by shooting when walking. But it’s not particularly
effective at smoothing out the higher-frequency vibrations in handheld
footage shot at a high zoom factor. 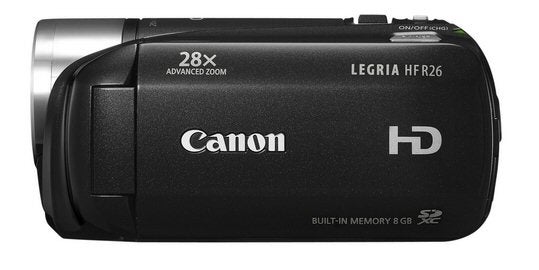 The
R26 unsurprisingly doesn’t have a lot for the enthusiast, considering
its budget orientation. There’s no accessory shoe or microphone input.
However, the AV output doubles as a headphone jack, and you can even
adjust audio levels. There’s also a fair range of settings available in
manual mode. Focus can be adjusted either using the increasingly popular
touch method, or onscreen buttons. Meanwhile white balance options offer the
usual range of automatic and manual settings, with presets for
artificial and sunlit conditions.

As with focusing, the Canon LEGRIA HF R26’s exposure controls have a touch option, or you can use the natty slider along the bottom of the screen, or buttons either end. However, this is a general exposure shift, as unlike so many Canon camcorders from previous eras, no aperture or shutter priority modes are available. The menu where these would normally be found merely includes Programmed AE, access to the array of Scene modes, and a Cine mode. The latter adjusts the colour range for a more cinematic look, which works well with the PF25 progressive shooting mode. The nine scene modes include the usual options, such as portrait, sports and night.

A small selection of digital effects are also available, with some wipes and fades in this section. There’s a Pre REC function, which creates a rolling buffer of a few seconds of video in memory, which is added onto the beginning of a clip when you press record, effectively capturing what happened just beforehand, and hopefully preventing you from missing Little Johnnie’s first steps.

Whether in auto or manual mode, you can also call upon the slightly
bizarre Decorate option. This lets you draw on the video as it is
recorded, add a range of particle effects, date/timestamp your footage,
superimpose an image, or pause the onscreen image. These are the kinds
of effects we would usually recommend adding during editing, as once
you’ve added them they can’t be removed, but for quick-and-dirty online
uploads they could add an extra layer of fun to your footage. 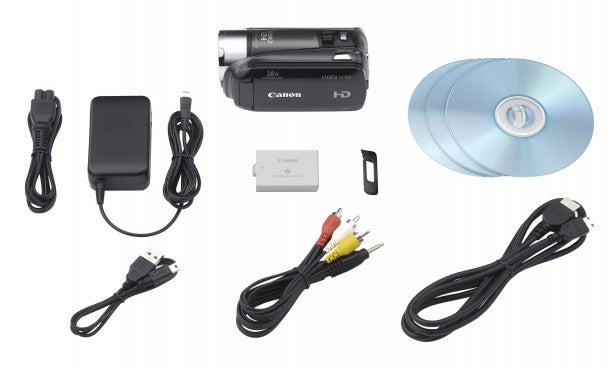 Despite
the budget orientation of this camcorder, it’s still capable of very
respectable image quality. When the lighting is good, the R26 produces a
crisp image with accurate saturation. It’s also possible to achieve a
bright image with faithful colour and only a mild tinge of grain in
relatively poor illumination. Our one caveat here is that we found the
automatic white balance system could be erratic in low light, often
bringing out a red or orange tinge, although switching to the indoor
preset mostly fixed this. But this was a sole black mark in an otherwise
commendable video performance, considering the price.

Verdict
The
Canon LEGRIA HF R26 is a bit more expensive than our favourite budget
model,
the JVC Everio GZ-HM445. But it also has built-in memory and a slightly
easier range of manual settings to access. So whilst this isn’t the best
value camcorder on the market, you still get a lot for your money,
making this a decent choice if you’re tight on funds.