Canon camcorders have a great reputation for image quality and features. But the company hasn’t been quite so well known for its budget options. Most recent to challenge the value end of the market is Canon’s Legria HF R18. Is this the model that will give Canon the edge for the more price-conscious consumer?

The Legria HF R18 is actually top-of-a-range of three models that share almost all specifications. The R18 integrates 32GB of flash memory, the R16 only has 8GB of flash memory, and the R106 has none at all. All incorporate an SD card slot, so you can add more storage if you want. In the case of the camcorders with memory on board, if this runs out during shooting the camcorder can switch automatically to removable memory without a break in recording.


Apart from the R18 being black, the R106 being silver, and the R16 offering a range of colours, the memory allocation is the only difference between the three models. They are all built around a relatively small 1/5.5in CMOS sensor with just 2.39-megapixels. This should be enough for Full HD, but only 1.56-megapixels are used in movie mode, less than the 2.07-megapixels required. You can take photos at up to 1,920 x 1,080 pixels but not at the same time as shooting video. 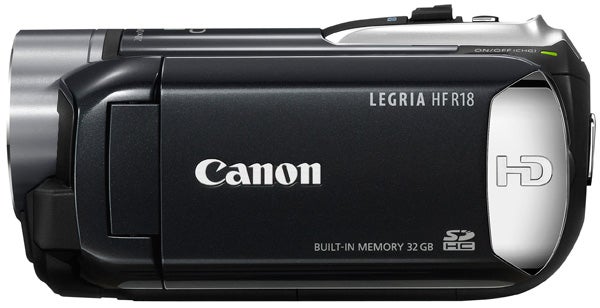 The Canon HD video lens provides a 20x optical zoom, and there’s an automatic cover over the glass. However, the image stabiliser is electronic. It has two settings – Standard and Dynamic. The former is for general usage, whilst the latter is particularly tuned for removing camera shake when shooting whilst walking. However, it crops into the frame when enabled, which will reduce detail, so you’re better off with the Standard version if you don’t need the added smoothing of the Dynamic setting.


Four AVCHD quality modes are available, with data rates ranging from five to 17Mbits/sec, but not the top 24Mbits/sec possible with this format. All are HD, although only the highest quality one is Full HD. The remainder operate at the anamorphic 1,440 x 1,080 resolution originally used by the tape-based HDV format. Even at the best quality setting, the R18 can fit over four hours of footage on board, so you probably won’t need the extra memory slot.

Unlike the more premium-oriented Legria HF M31, the R18 doesn’t use a touchscreen for menu control. Instead, you get a more traditional joystick, which is located on the edge of the LCD. On its own, this operates a quick menu, which provides rapid access to a few of the most often-used functions, including manual exposure and focus. The latter can be a little fiddly to operate with a joystick, but at least there’s an assist function, which magnifies the frame to help you with adjustment.


The quick menu also provides a speedy way to switching on the Pre REC function and Face Detection. The former keeps three seconds of video constantly buffered, which are then added to the clip when you hit record. The latter now almost universal function picks up human faces and uses them as reference for exposure and focusing. Most amazingly, access to manual audio levels is available, despite the lack of minijacks for an external microphone or headphones. There’s no accessory shoe, either, for attaching peripherals.

The range of settings is reduced compared to many Canon camcorders, too. We’ve gotten used to seeing virtually all Canon camcorders, even the budget ones, offering aperture and shutter priority modes, with a separate exposure control providing the next best thing to fully independent configuration of both settings. But the R18 doesn’t offer these, only the exposure control on its own.


White balance options include just single indoor and outdoor presets, plus automatic and manual. A 25PF progressive shooting mode can be called upon if you want to avoid interlacing artefacts. There’s a cinema colour option to go with it, although you can’t use this at the same time as scene modes. Most impressively, Canon has kept its image effects available. So you can make colour vivid or neutral, reduce sharpening, or soften skin tones. But the user-customisable setting of higher-end Canon camcorders is not available.


If you delve into the full menu, goodies like x.v.Color can be found. There’s flicker removal for 50Hz and 60Hz sources – great for shooting when there’s a TV in the background. For those not interested in manual configuration, the Smart Auto mode detects conditions and sets the scene mode accordingly, although there aren’t quite as many different modes as, for example, Panasonic’s Intelligent Auto.

The R18 shoots decent enough footage in bright conditions. Colours are vibrant but faithful, and detail is quite sharp, although the picture is less fine than premium models, due to the effective CMOS sensor resolution being less than Full HD. Areas of high contrast are also handled commendably. 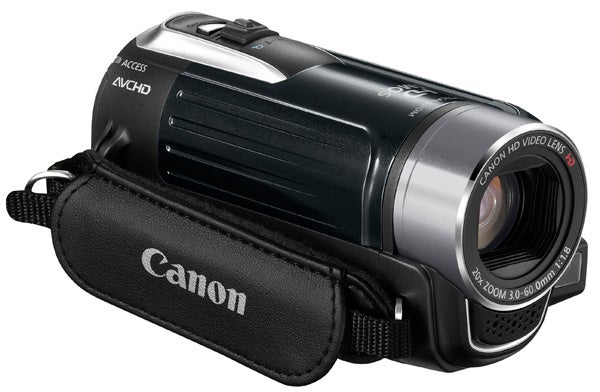 However, the R18’s abilities in poor illumination are not so outstanding. Now that even cheap pocket Internet camcorders such as Kodak’s Playsport Zx3 have quite large sensors, the R18’s smaller one seems meagre. Although the image was quite bright with a fair amount of colour maintained in our 100W ceiling light test, it was marred by a considerable helping of seething multicolour grain, and this was echoed in our less formal low light testing. The R18’s performance implies that the company should consider back-side illumination technology if it wants to compete on quality using a CMOS sensor this small.


Doors at the rear cover a comprehensive set of video output ports, alongside the USB 2.0 connection. There’s mini HDMI, component and composite analogue. Cables are supplied for both the analogue connections, but not the mini HDMI, so you’ll have to fork out a little extra if you want to view your video digitally on your HDTV.


You can pick up the Legria HF R18 for around £300, and it has a fair amount to offer for the money. However, it’s not the only fully featured Full HD camcorder at this price. Panasonic’s HDC-SD60 has a similar range of capabilities, better image quality in low light, and costs about the same when you add a 32GB SDHC card. So it remains our budget HD choice. But Canon has some new models just around the corner, so watch this space. The R18 may not be the one, but it successor just might be.