After setting the standard for premium HD camcorders in 2008 with the HF10 and its derivatives, Canon’s 2009 models didn’t quite whet our appetites so much. But the company doesn’t rest on its laurels, and 2010 has scarcely begun before we’re seeing the first examples of the next generation trickle through. First to reach TrustedReviews is the mid-range Legria HF M31, top of a trio of siblings which includes the HF M36 and HF M306.


The HF M31 is essentially another enhancement of the Legria HF20 and HF21. Like the latter, it relies on a 1/4in CMOS sensor with a gross 3.89-megapixels, uses a Canon HD lens with the same specifications, provides a 15x optical zoom, and integrates an identical DIGIC DV III image processor. The HF M31 has 32MB of flash memory built in, which is enough for three hours of footage at the top quality mode. This shoots Full HD resolution AVCHD at the maximum possible 24Mbits/sec data rate. The HF M31 also sports a slot for SD memory, should you need more storage. So in this respect it’s identical to the HF20.


The biggest news is not the core specifications, then. What has changed is the control interface. With the HF M31, Canon has followed Sony and Panasonic and switched to a touchscreen LCD. In regular shooting mode, there are three onscreen buttons. One simply switches between camcorder and camera modes. The other enables onscreen buttons for operating the zoom and toggling recording, so you can use the camcorder two-handed from a more waist-oriented position.

The final FUNC button calls up the camcorders settings, and this menu has been totally redesigned from previous Canon camcorders for easier touchscreen operation. The initial screen presents just 12 options in two screens, which you can switch between with a finger flick across the screen, in a similar fashion to an Apple iPhone’s main app interface.


The first screen provides access to focusing, white balance, exposure, mic level, program modes, and the full menu. The second screen offers controls for zoom, AGC, the video light, the Pre REC function, digital effects and image stabiliser settings. Although most of these operate in the same way as with other Canon camcorders, there are some new additions. The focus and exposure options take full advantage of the touchscreen, providing one-touch operation where you simply indicate which point within the frame you would like to use as reference. However, Canon doesn’t provide the facility to combine the two into a single action, unlike Sony and Panasonic. You can also operate both with onscreen sliders, if you prefer.

The usual array of Canon Program modes are available, including Shutter Priority, Aperture Priority, Cine Mode, and 11 scene preset options. Sadly, Canon’s excellent Image Effects have been relegated to the full menu. So you will need to head here to change colour saturation, sharpness, and to enable soft skin detail. But you can still set brightness, contrast, colour depth, and sharpening manually up or down an increment via the custom option. The HF M31’s full menu also lets you toggle Canon’s Advanced Face Detection, which can pick up as many as 35 faces at the same time. We found this recognised faces relatively quickly, and was therefore quite adept at tracking them as they moved. 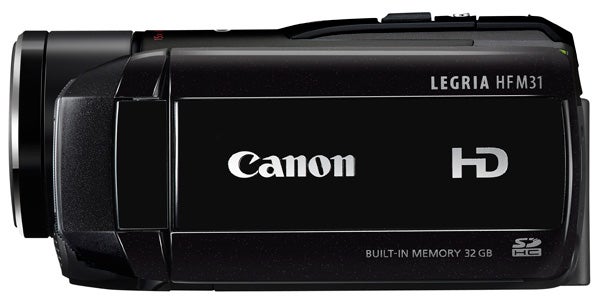 With its wider array of options, the full menu uses smaller text. But Canon has done a reasonable job of keeping it usable. Instead of simply touching the option you want, you have to scroll the menu up to reach it. This then enables a button to access the parameters for that option. It’s not quite as quick as being able to just touch the option you want to access immediately, but more accurate and therefore less likely to cause frustration. 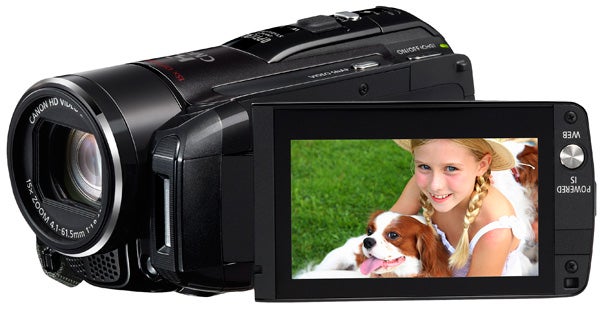 Thanks to the touchscreen, Canon has removed virtually all the buttons from the HF M31. There is one physical button still available on the LCD, for the Powered IS. This new feature adds yet another level of image stabilisation on top of the two basic options. By default, there are two different types of image stabilisation available – Standard and Dynamic. The latter is aimed at compensating for the kinds of wobble caused by shooting whilst walking. The Powered IS mode enables a temporary extra level on top, which is particularly aimed at ironing out vibrations when shooting at maximum zoom. We found it had a noticeable effect, making quite jerky footage far smoother. However, it also appears to have a mildly detrimental consequence for image quality, which loses some of its subtle saturation.

Despite its small size and midrange orientation, the HF M31 still sports an accessory shoe. This is cleverly hidden at the rear beneath a plastic flap, but it’s Canon’s proprietary “S” Mini Advanced Shoe, rather than standard sized, so will only accept Canon peripherals. Nevertheless, the HF M31 still offers minijacks for an external microphone and headphones, with manual audio level control also available, as already mentioned. 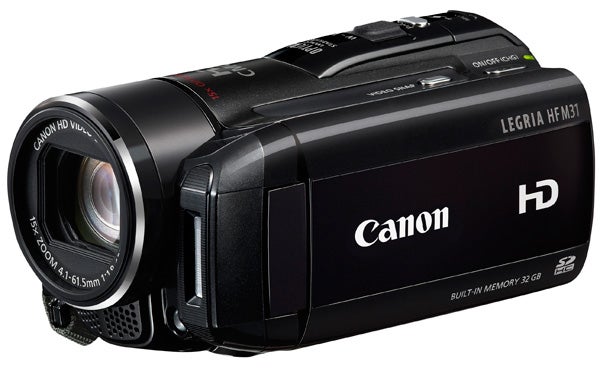 Although the HF M31 has a relatively small CMOS sensor, its image quality in adequate lighting is very good indeed. Colours are very faithful, with plenty of sharp detail, although there is a small amount of noise visible. Unfortunately, this holds the HF M31 back as illumination drops. In poor lighting, the image is noticeably darker than top models with larger sensors, and although fine detail is still visible, it’s rendered fuzzy by the grain. On the plus side, Canon’s Instant AF means the HF M31 is still able to focus at quite low levels of illumination, which camcorders relying solely on TTL often find problematic.


Despite its slight low light shortcomings, the Canon Legria HF M31 is a tempting proposition. The new touchscreen interface is mostly well executed, it’s compact, and comes with a healthy assortment of enthusiast features. Unfortunately, however, the problem with Canon’s previous generation of mid-range camcorders remains – it’s a little too expensive. At just under £800, it’s vying with top-of-the-range models from other manufacturers, such as Sony’s HDR-CX505VE or JVC’s Everio GZ-HM400, and it’s not far off Panasonic’s HDC-TM300 either. With all three offering larger, or more numerous sensors and better low light performance, the HF M31 needs to drop in price before it becomes competitive.