What are the main requirements of a personal laser printer? It should produce good quality print reasonably quickly, of course, but it should also be small, quiet, easy to use, inexpensive and cheap to run. Against this set of criteria, Canon’s diminutive LaserShot LBP3000 starts off well.


It’s about the size of a bread-maker, but half the height. Before you can use it, you have to increase the printer’s footprint by pulling the front cover down, as it forms the paper-feed tray. Load up to 150 sheets of paper on this and fit the provided smoked plastic cover. A clear cover on the top of the printer folds out to form the output tray.


Despite the low asking price of the LBP3000, there is a multi-purpose feed, positioned just above the main paper tray, so you can print envelopes and special media, a sheet at a time. This facility is not found on some colour laser printers costing over four times as much as this mono machine. 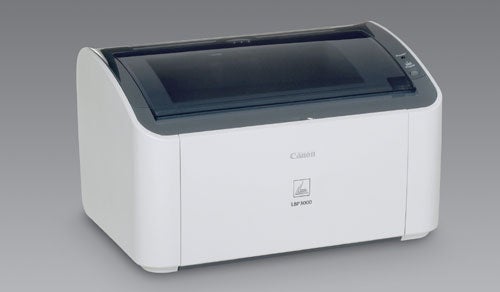 There’s a single, blue power light and an illuminated button to show when paper runs out on the printer’s top surface, but there’s no LCD display and you need to rely on messages from the printer driver on your PC, if anything untoward happens. Nothing did while we were running our tests.


The single-piece photoconductor drum and toner cartridge slides deep inside the printer, once you’ve lifted a cover on its top surface. This is the only consumable you need to fit, to maintain the LBP3000. At the right rear is a small hinged cover, which reveals the USB 2.0 socket. This is the one connection provided as standard, though you can fit an Ethernet network adapter as an optional extra.


The only software is the printer driver and this is pretty basic, with no facilities for watermarks or overlays. It can do page imposition up to 16 pages per sheet and will also print posters of up to four by four sheets.


Because of the simplicity of the driver, it’s very easy to get the machine up and running and the only complication in use is whether you want to remove the paper and fold up the paper tray when you’re not printing. We think most people will let it lie, for the increased convenience.


Canon claims 14 pages per minute as a top speed for this machine in draft mode and we wouldn’t contest this. Printing in normal mode, we completed our five page text document in 33 seconds, which gives just over nine pages per minute. Not bad for an entry-level laser printer, costing under £90.

The company also claims no warm-up time for the machine and this was reflected in a single text and graphics page competing in just 12 seconds, a pretty good performance. Finally, our 5 x 3in photo took 11 seconds so, overall, we were more than happy with the printer’s throughput speed.


The LBP3000 has a physical resolution of 600dpi, though this is enhanced up to an effective resolution of 2,400dpi. In practical terms, the resolution of the LBP3000 is more than adequate to produce crisp, clear text and the Canon toner ensures it’s densely black, too. 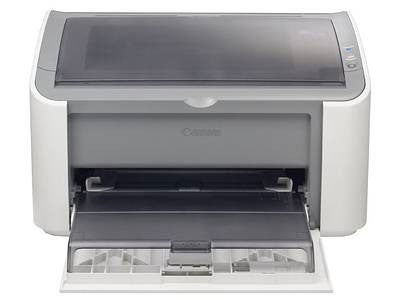 When it comes to graphics and reproducing colours as grey fills, things are not as clear-cut. Greyscale fills are uneven and the dot pattern used to generate them is clearly visible. We also noticed some splatter close to solid black rules, which we’ve seen on at least one entry-level HP laser printer, too.


Photographic reproduction suffers from the same irregular fills, showing up as banding across the image, and again the dot pattern is easy to see. Detail, even in areas of shadow, is reasonably well reproduced, despite this.


The printer is nice and quiet when printing, with none of the clunks and thumps sometimes associated with paper feeds in other inexpensive laser printers.


As mentioned, there is just a single consumable for the LBP3000, which we sourced at around £40. Since the cartridge is only rated at 2,000, five per cent pages, this gives a cost per page of 2.82p. Nearly 3p a sheet is expensive and compares unfavourably even with some ink-jet printers. It is totally dependent on the price you can find for the cartridge, though, so you may be able to cut you’re cost of ownership simply by shopping around.


The LaserShot LBP3000 fares pretty well against our list of criteria. It prints quickly and cleanly, particularly on text documents, though graphics and photos are below average. It’s small, quiet, easy-to-use – partly due to a lack of features in its driver – and cheap to buy. It’s not that cheap to run, though, because of the relative expense of its toner cartridge. If you don’t print a lot of pages, this may not be your most important consideration.