A few weeks ago I reviewed the Nikon CoolPix P1, a sleek eight megapixel compact featuring WiFi connectivity. It’s often the case that a new idea will appear almost simultaneously from several different sources, so it’s no surprise that Nikon isn’t the only company experimenting with wireless technology.


This week I’ve got the new Canon IXUS Wireless. As the name suggests it has a built-in wireless network device, which connects the camera to any computer that is equipped with a wireless network adapter, allowing quick and easy downloading of captured images. 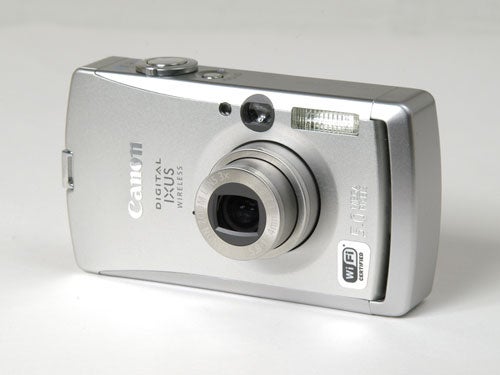 We’ll come to the wireless functions in a while; first let’s take a look at the rest of the camera. Like all the models in the Canon IXUS range, the IXUS Wireless is a stylish pocket-sized camera, designed as much for its looks as its picture taking ability. The IXUS range is a premium brand for Canon, and this is reflected in the price. The IXUS Wireless has a list price of a hefty £399.99, although it is available for around £279 online. This is very expensive for a five megapixel compact, especially when there are smaller 6MP cameras out there for less than £200.


However you do get a lot of camera for your money. The Wireless has a strong steel case with a matt anodised finish, and like most Canon cameras it has a feel of real quality about it. Fit and finish is of a very high standard, and the controls are sensibly positioned and securely mounted, although I found the white-on-silver and gloss-on-matt lettering on the buttons and D-pad very hard to read in anything other than bright daylight. A higher contrast colour scheme might have been a better idea. 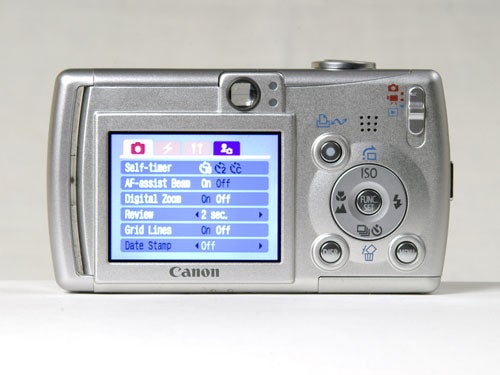 Unusually for a modern compact camera, the IXUS Wireless has a comparatively small 2in LCD monitor and a good quality optical viewfinder. This is very useful for saving battery power, since you can turn the monitor screen off and take photos the old-fashioned way. The Wireless has a fairly small 760mAh Li-ion battery that is good for only about 150 shots on a full charge, so anything that can extend this is a good idea.


On the front we find a compact 3x optical zoom lens that retracts right into the camera body, giving the Wireless a very slim profile, just 21.7mm thick. Above the lens is a small AF illuminator for low light focusing, which has an effective range of about two metres. There is also a reasonably powerful built-in flash which has excellent frame coverage and a range of 3.5m at wide angle or 2m at full zoom.

On one end of the camera is a raised plastic section separate from the main body of the case. I was curious about this at first, since it looks like it ought to come off. However all it does is provide an arty cover for a bright blue indicator lamp that flashes when the wireless link is active. It’s completely unnecessary and adds nearly 1cm to the length of the camera, but I guess it looks sort of cool. Maybe. 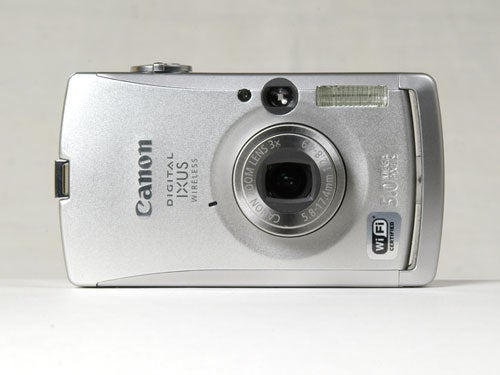 In terms of operational performance, the Wireless maintains the very high standards set by the rest of the IXUS range. Its AiAF autofocus system is one of the fastest and most accurate I’ve seen, and it works equally well in low light conditions. In continuous shooting mode at full resolution and the highest quality setting it can fire off five frames in just under four seconds, and appears to be able to keep this pace up until the memory card is full, which is a very impressive performance. Most cameras need to pause to write to the memory card, but the IXUS just keeps shooting.


The control system is very similar to that on most Canon compacts, with most frequently used options being adjusted via the function button rather than the main menu. 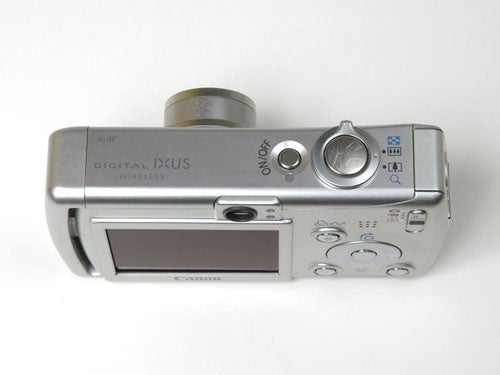 The camera has two main shooting modes; automatic, in which everything apart from image size and quality is taken out of your hands, and manual, in which exposure compensation, which balance, ISO and metering mode can be altered. As well as these, there is a choice of six scene modes, including Kids & Pets, Indoor, Foliage, Snow, Beach and Fireworks, plus two colour saturation settings, low sharpening, sepia and monochrome.


Other functions such as flash mode, macro mode, self timer and continuous shooting are set as secondary functions on the D-pad. Unusually, ISO setting is also adjusted by cycling through the different settings by pressing up on the D-pad. When the camera is in manual mode there is no automatic ISO setting, so be sure to remember what you have it set to.

Of course the camera’s big party piece is its wireless connectivity. As features go I’m still not sure it’s that useful, but I have to admit I was very impressed by how easy it was to set up. I experienced some slight technical difficulties when I tried the Nikon P1, but with the IXUS Wireless it was simply a matter of installing the supplied software, connecting the camera via the USB lead to set it up to talk to my computer, and then the wireless link was established. 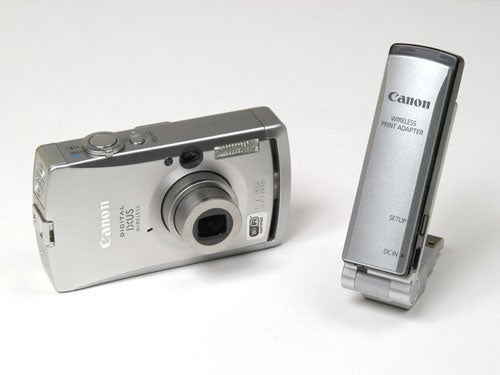 Although it is a 5MP camera, the file sizes at the Superfine quality setting are quite large, averaging around 2.2MB. Nonetheless the download speed was quite respectable, copying over a dozen images in just a couple of minutes. The range on the connection was quite good too, and I was able to send images to my laptop in the next room with no problem, although this may vary depending on the wireless hardware in your computer.


The IXUS Wireless also comes with a wireless printer adapter, a clever little gizmo that is supposed to plug into the USB port of your printer, and allow you to print your pictures wirelessly direct from your camera. Unfortunately if, like mine, your printer has a standard Type B USB socket then you won’t be able to use it because the Type A plug on the adapter won’t fit. And yes, my printer is a Canon. It’s also worth noting that the wireless communication feature is only compatible with computers running Windows XP SP2. Sorry Macintosh owners, looks like you lose out again.


Of course all this clever technology wouldn’t be much use if the picture quality wasn’t up to snuff, but thankfully the IXUS has no such problem. The small lens does produce some slight blurring in the corners of wide-angle shots, but overall the picture quality is superb, with good contrast, very high levels of sharp detail and minimal barrel distortion. The DIGIC II image processor is fast and accurate, with very accurate metering producing excellent colour reproduction, and very good noise control at 50 and 100 ISO, and only a little noise at higher settings.


Although it is very expensive for a 5MP compact, the Canon IXUS Wireless is an extremely high quality camera that is versatile but easy to use, and is capable of taking superb pictures. The WiFi connection is easy to set up and use, and works well. The only question is whether wireless downloading would be sufficiently useful to you to justify the price.

Note: These ISO test shots were taken indoors using two domestic 60W tungsten bulbs as the only light source, with the camera’s white balance set on automatic. The camera was mounted on a tripod, and the self-timer was used to prevent shake. 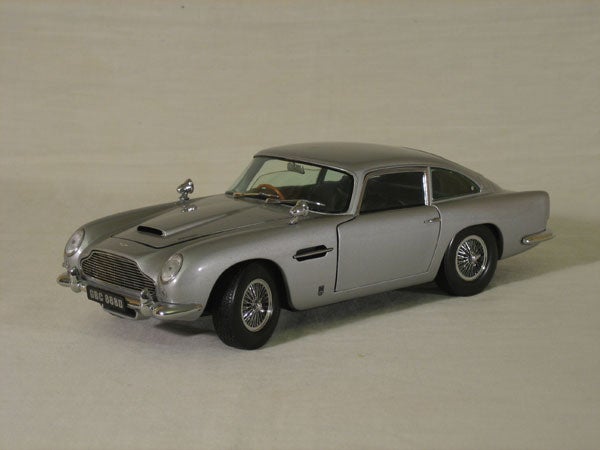 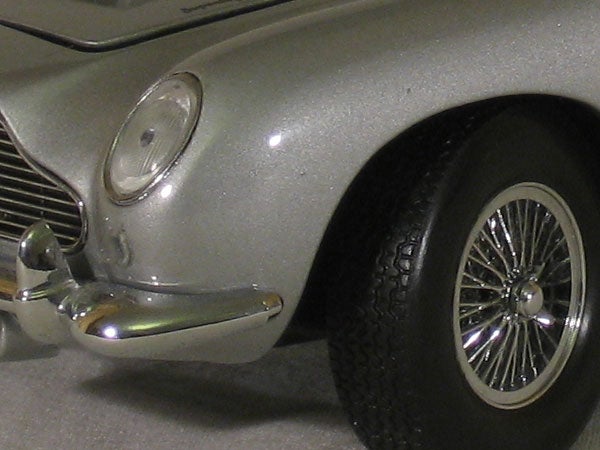 ½ sec, F4.5, ISO 50. At the lowest sensitivity setting the picture is smooth and crisp with excellent colour rendition and no visible image noise despite the long shutter time. 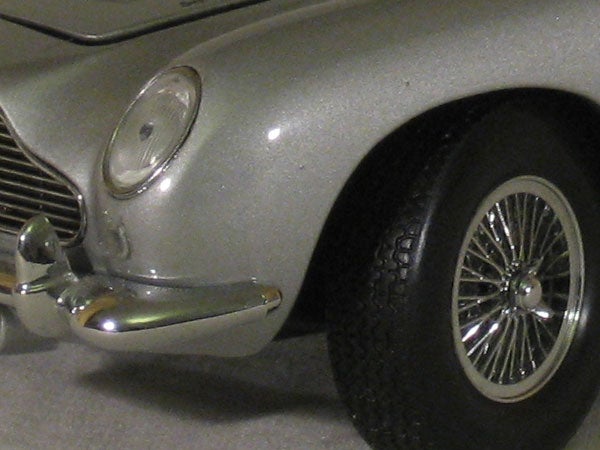 ¼ sec, F4.5, ISO 100. At 100 ISO image quality is still extremely good, with no visible noise, although there is a hint of colour speckling in the mid-tone areas. 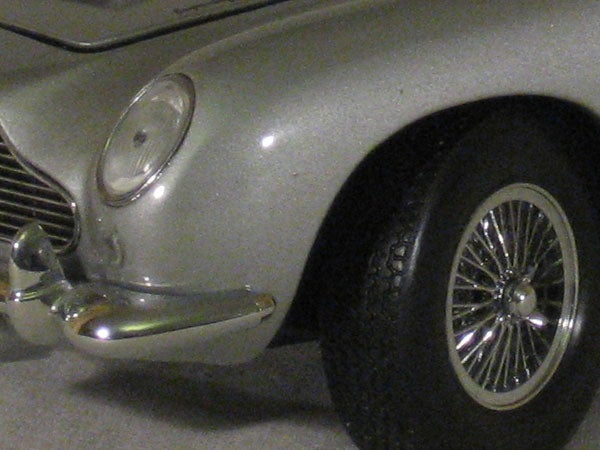 1/8 sec, F4.5, ISO 200. At 200 ISO there is a little noise beginning to break through in the darker areas, although it is very even and has little effect on overall quality. 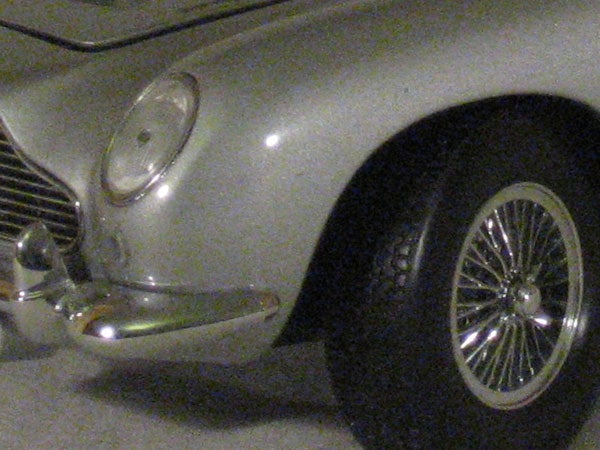 1/5 sec, F4.5, ISO 400. At the highest ISO setting the image noise and colour speckling are more pronounced, but are well controlled and the image is still usable. 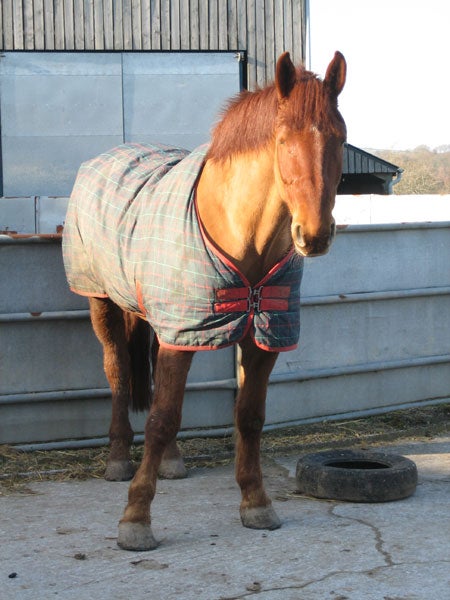 The level of detail in this mid-range shot is very good for a 5MP camera, and the colour rendition is superb. 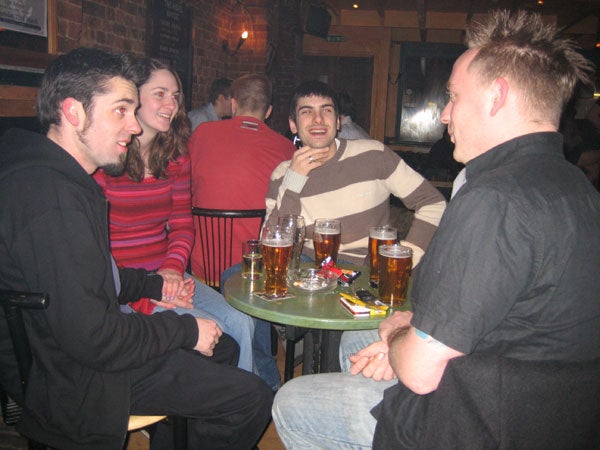 Indoor flash coverage is very good, and the range is easily enough to illuminate a medium-sized room. The red-eye effect is a bit fierce though. 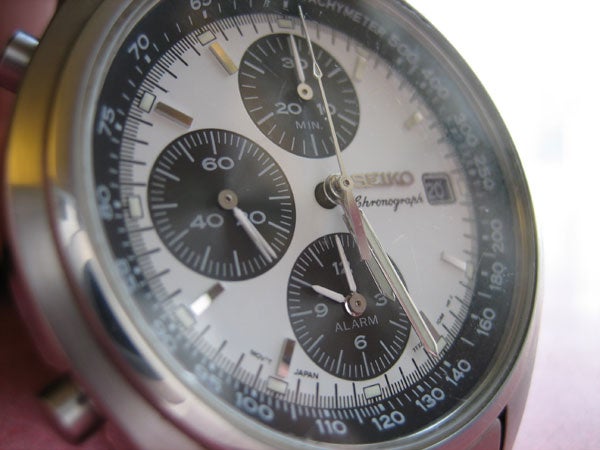 The IXUS Wireless has a macro range of 3cm, which is pretty good for a slim compact. 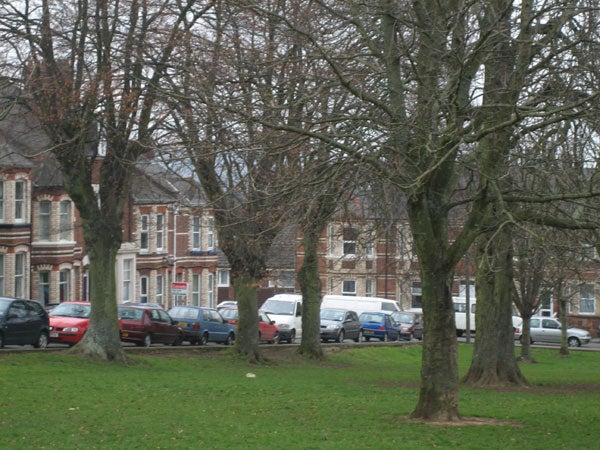 I should probably have used a tripod for this shot, which was taken at the maximum zoom setting, equivalent to 105mm. 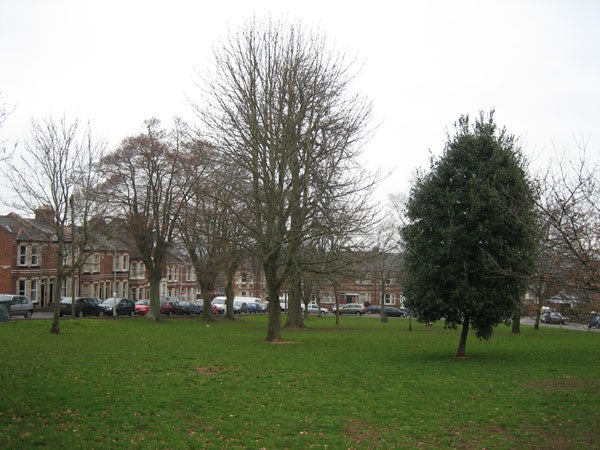 Taken from the same position as the previous shot, this demonstrates the Wireless’s wide angle setting, which is equivalent to 35mm.