When I was at school, there was a guy in my year who had every natural advantage. He was tall, blonde, blue-eyed and handsome, came from a wealthy and well-connected family, was captain of cricket and rugby, got straight A’s in his O-levels, did something like five A-levels and got A’s in those too, and was on the fast track for Oxbridge. Like everyone else I really wanted to hate him for being a smug over-achieving git, but in fact he was also a really nice and likeable guy. Call me weird if you will, but the top models in Canon IXUS range of digital compacts often remind me of him. 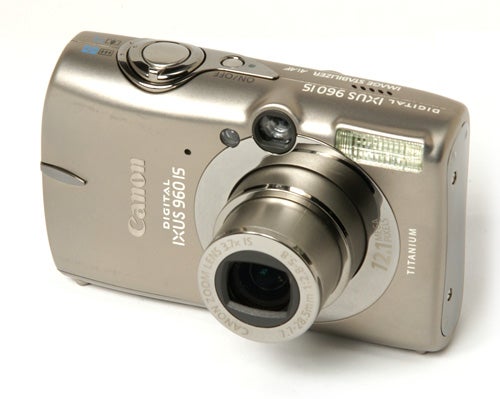 Take this 12.1-megapixel IXUS 960 IS for instance. Sure, at around £240 it’s pretty expensive, but it has a titanium body, a 3.7x zoom lens with optical image stabilisation, a 2.5-inch 230k monitor and an optical viewfinder. At the same time it is simple to operate, a pleasure to use and takes fantastic pictures. I really want to find something negative to say about it so this review doesn’t turn into the kind of hagiography to the almighty Canon seen all to often in camera reviews, but dammit there’s just no getting away from the fact that the IXUS 960 IS is a really nice and likeable camera.


There aren’t many other cameras that can stand in direct comparison to the 960 IS. Other high-spec 12MP compacts such as the Pentax Optio A40 (£190), Nikon CoolPix S700 (£200), Fuji FinePix F50fd (£145), Panasonic Lumix FX100 (£175), Sony Cyber-shot W200 (£165) and Casio Exilim Z1200 (£160) are all a lot cheaper, and all of them lack one or more of the Canon’s features as well as its overwhelming air of quality. But that’s OK, you wouldn’t compare a Bentley Continental with a Nissan Primera anyway. And that of course is the key; the triple-digit models in Canon’s IXUS range are luxury products, and some people are willing (and able) to pay a bit more to get the very best. 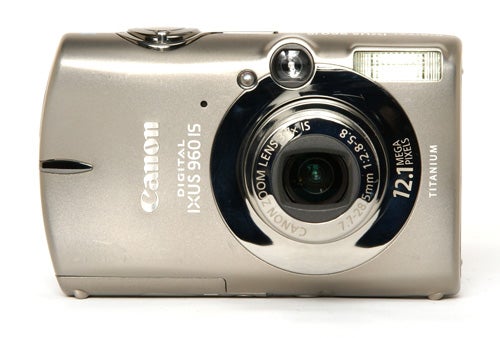 The sheer quality of the IXUS 960 IS is apparent as soon as you open the box. The matt grey finish of the titanium body looks fantastic, and the camera feels immensely solid and sturdy. Titanium is lighter and stronger than steel, but even so the 960 isn’t a particularly light camera, weighing 165g without the battery. It’s also not particularly small, measuring 95.9 x 59.9 x 27.6mm, larger than any of its main rivals. Still, it is small and light enough to slip into in a pocket for a night out and won’t take up much room in your holiday luggage.

The shape of the body is unusual, and different from previous IXUS models. The right end of the body has a concave pinched-in contour, and is slightly flared out at the top and bottom. This makes the camera very comfortable and secure to hold, helped by the mode dial which also serves as a thumb grip on the back. The position of the controls is very natural and comfortable and even though the buttons are quite small they are raised up slightly making them easy to operate. 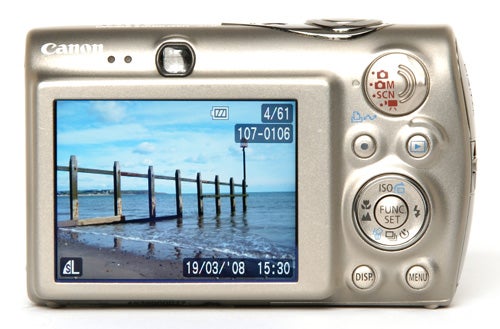 I’m not usually a big fan of optical viewfinders on pocket compact cameras, because they tend to be too small and suffer from parallax problems at close range. The 960’s viewfinder is larger and brighter than average though, and due to its position, almost directly above the lens, the effect of parallax is reduced. The monitor is also excellent, very bright and sharp with a fast refresh rate, and with an exceptionally wide angle of view.


My only real criticism of the external design of the camera concerns the battery hatch, which is spring loaded but has no locking latch. I found that is came open in my pocket several times, which could lead to it becoming damaged despite its strong metal hinge.


The 960 IS is an automatic point-and-shoot camera, but it does have a fairly wide range of options. Basic shooting modes include a full-auto option in which most menu options are disabled, a “manual” mode with a full range of options (although not manual exposure or focusing), a scene mode with eleven scene program options, and the movie mode, offering 1024 x 768 at 15fps or 640 x 480 at 30fps, with mono audio. 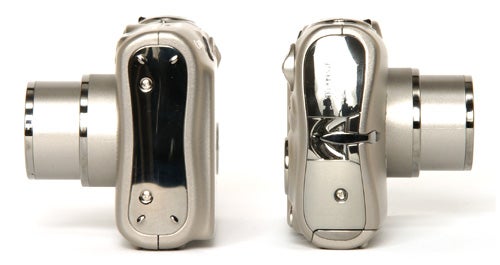 The 960 IS uses the same menu system as all the other models in the IXUS range. Pressing the Function button in the centre of the D-pad activates a quick live menu with most of the main shooting options, including exposure compensation, white balance, colour mode, metering mode, quality and image size. The colour mode offers a number of useful pre-sets including settings for different skin tones, plus a manual setting with adjustable contrast, saturation, sharpness and colour balance. Combined with the shooting options available on the D-pad, such as drive mode, flash mode, macro/landscape selection and ISO setting, the 960 IS is exceptionally quick and easy to operate.

A major selling point is of course the image stabilisation system. This uses electronically activated moving elements within the lens to compensate for camera shake at slow shutter speeds, a system used by Canon in many of its models. Image stabilisation is becoming increasingly common in pocket compacts, but Canon’s system is one of the best, giving a reliable three stop advantage over non-stabilised cameras. I found I was easily able to shoot without the flash at shutter speeds as slow as 1/10th of a second. The system has a panning option which only stabilises in the vertical plane. 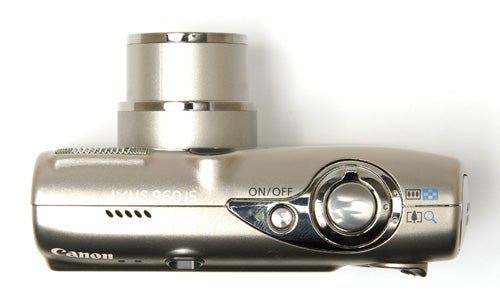 Overall performance is traditionally Canon’s strong suit, and the 960 IS does not disappoint. It starts up in just over a second, which is very quick, and shuts down again in just under two seconds. In single-shot mode, at the highest image quality setting, the shot-to-shot cycle time is approximately 1.8 seconds, which isn’t blindingly fast, but isn’t bad considering that the average files size is around 5.5MB per shot, indicating a much lower compression rate than some other 12MP compacts. Continuous mode is much quicker, averaging just over one frame a second.


Canon’s AF system is also exceptionally good, focusing quickly and accurately in virtually all light conditions, including pitch darkness thanks to the AF assist lamp, which has a range of about three metres. I’d put the 960 IS in the top five of current compact cameras for overall low-light performance.


Having reviewed a lot of 12MP compact cameras and not having been very impressed by the image quality produced by many of them, I was concerned that this might also prove to be the IXUS 960’s weakness, but I need not have worried. What is surprising though is that its greatest strength lies in an area where high-resolution compacts are normally at their weakest: image noise at high ISO settings. The 960 produces better quality pictures at 800 ISO than most 10MP or even 8MP cameras, and at the lower settings the image quality is simply stunning, with perfectly sharp detail and no trace of noise at all. Likewise in the other potential trouble spots of dynamic range and colour depth the 960 performed very well. The lens is also superb, producing very little distortion at the wide angle end and none at all at telephoto, with excellent sharpness that only drops off in the furthest corners of the frame. The only criticism I could find was a surprising one, the presence of some purple fringing around some very bright highlights, but the effect was minor. Despite this the IXUS 960 IS has the best image of any of the 12-megapixel compacts, indeed it has among the best image quality of any ultra-compact camera I’ve tried. 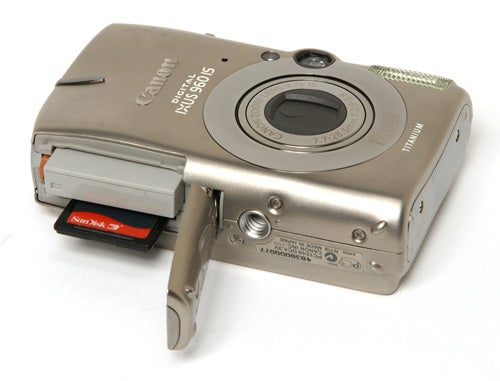 Canon’s IXUS range of high-spec compacts continues to set the standard for the rest of the industry. The 960 IS has pretty much everything you need except a wide-angle lens. It is relatively expensive, but with superb design and bomb-proof build quality, exceptional performance and class-leading image quality you really do get what you pay for. The 960 IS is easily the best 12MP compact on the market, and a sound investment for anyone who can afford it. 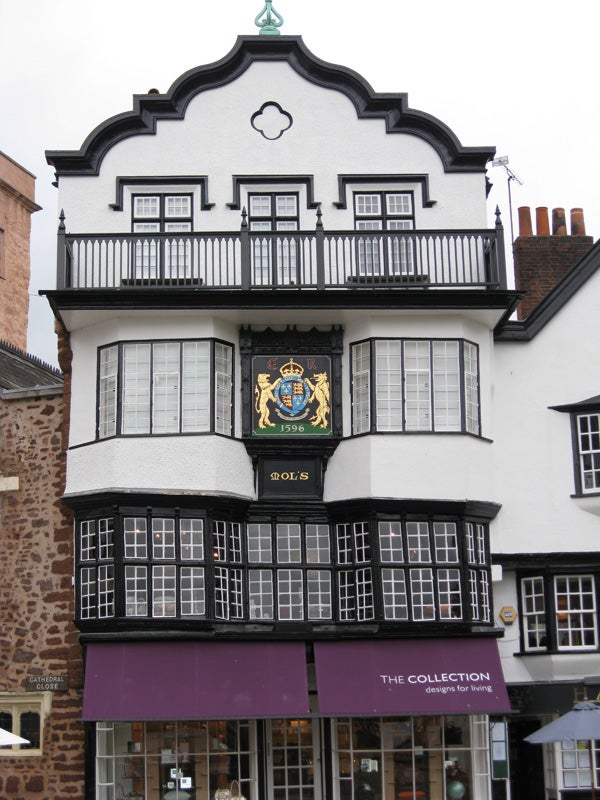 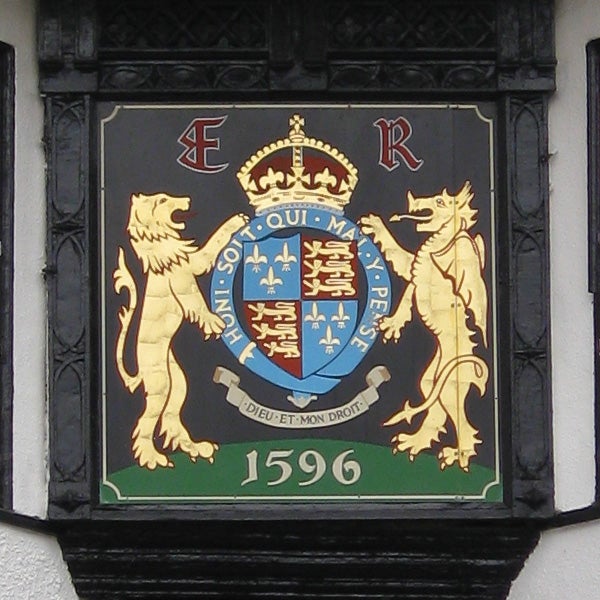 At 80 ISO the image quality is superb, with pin-sharp detail and not even a hint of noise. 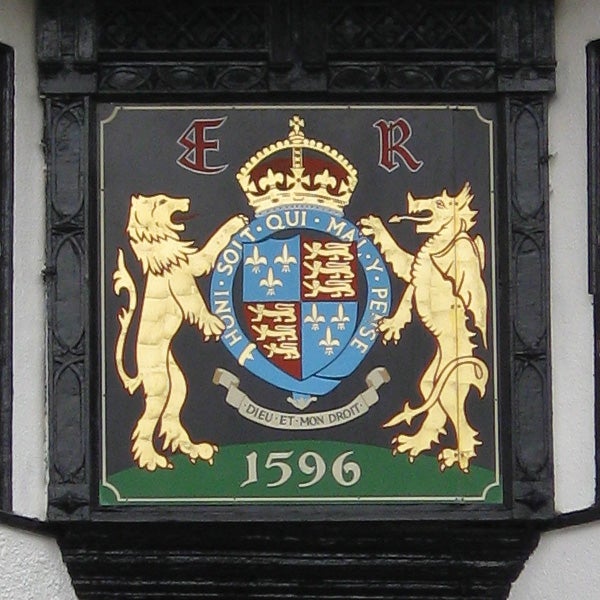 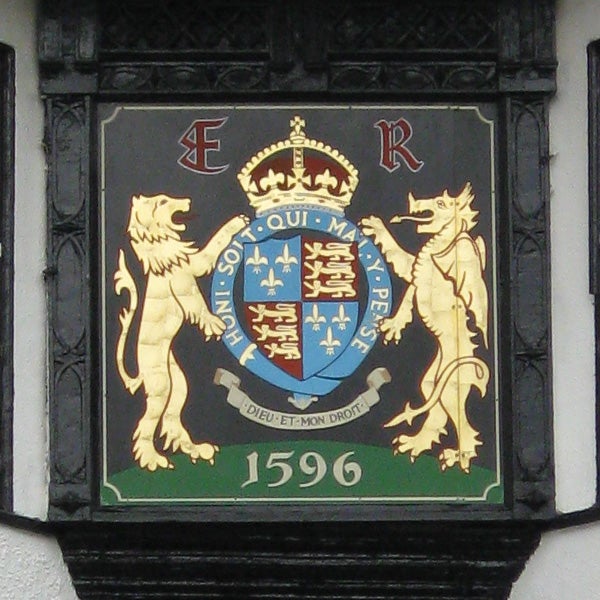 There is a very slight speckling of noise at 200 ISO, but the level of detail remains very high. 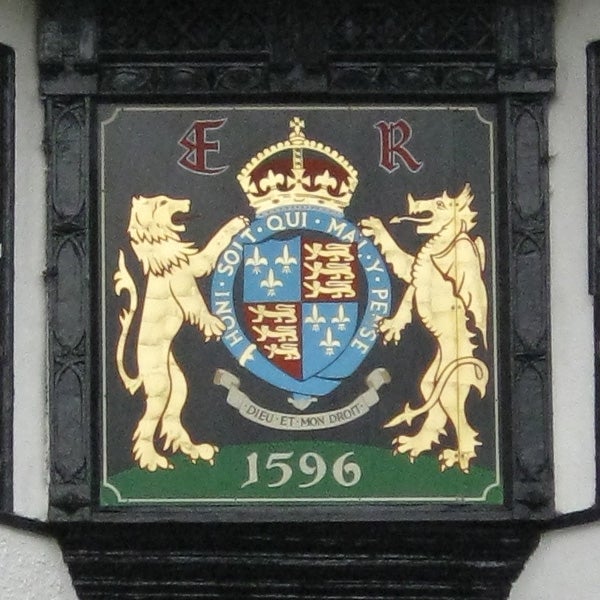 At 400 ISO there is some slight luminance noise, but colours remain largely unaffected. 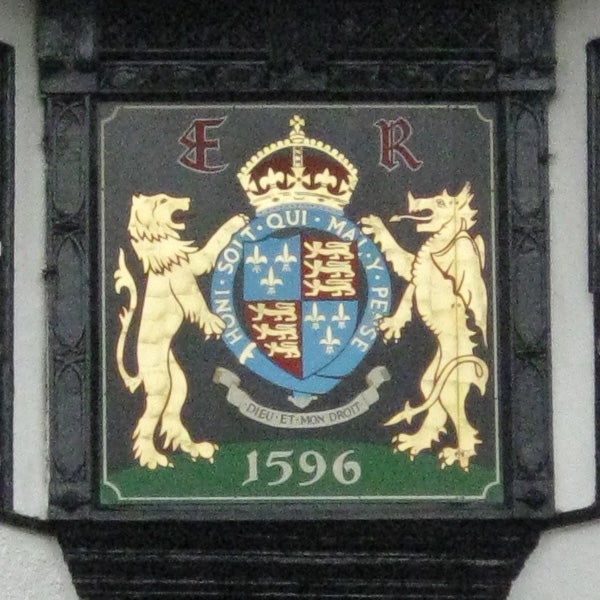 While noise effects are more plainly visible at 800 ISO, the motto is still quite sharp and readable. Compare this with 800 ISO shots from other 12MP compacts. 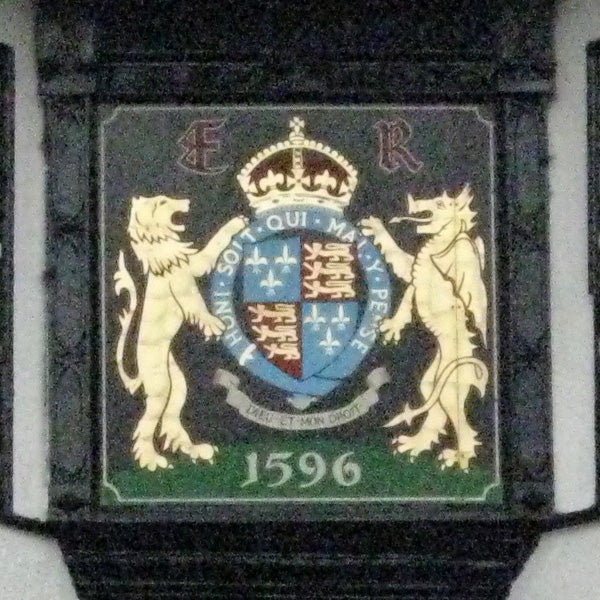 At 1600 ISO the noise level is suddenly much worse, and the image quality takes a plunge. However even at this setting the motto is still readable. 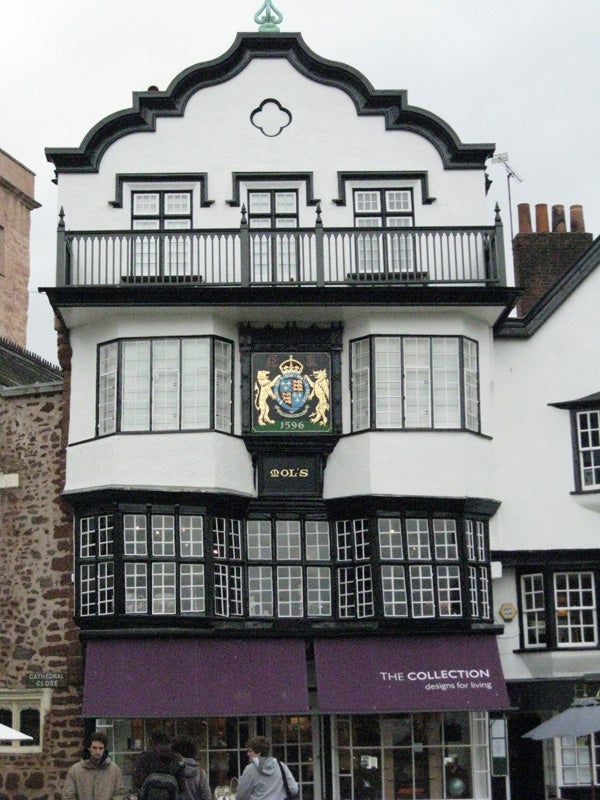 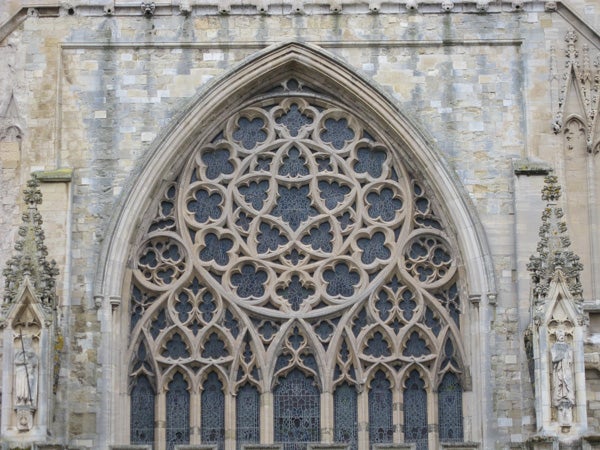 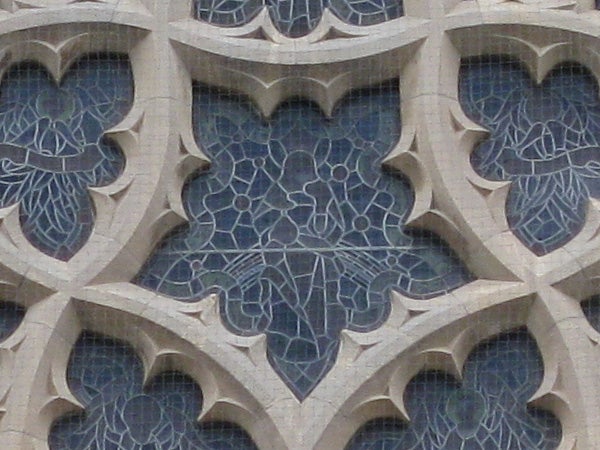 The level of fine detail is exceptionally good, among the best ever from a pocket compact. 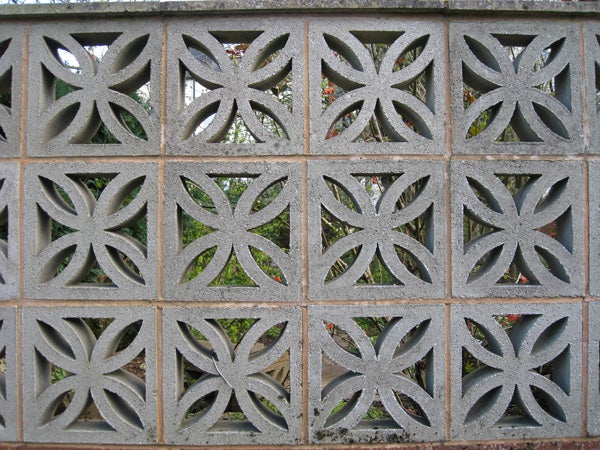 The lens produces some barrel distortion at wide angle, but I’ve seen a lot worse. 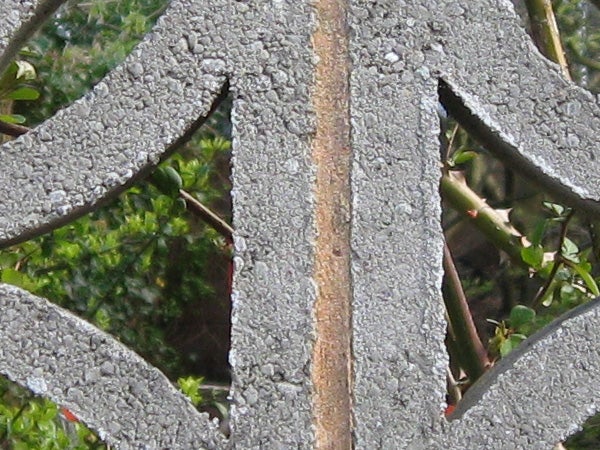 Excellent sharpness at the centre of the frame. 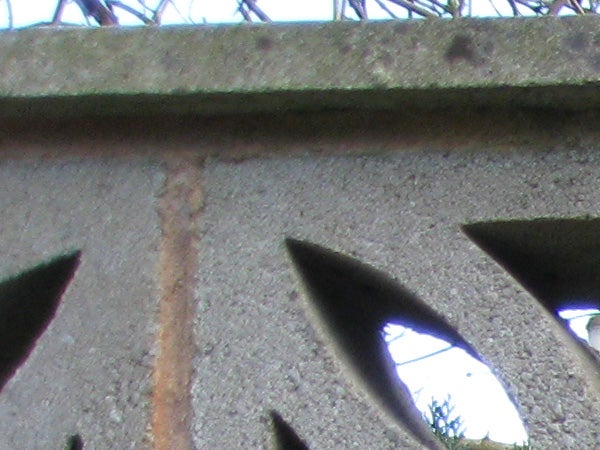 There is some blurring at the very edges of the frame, and surprisingly some purple fringing too. 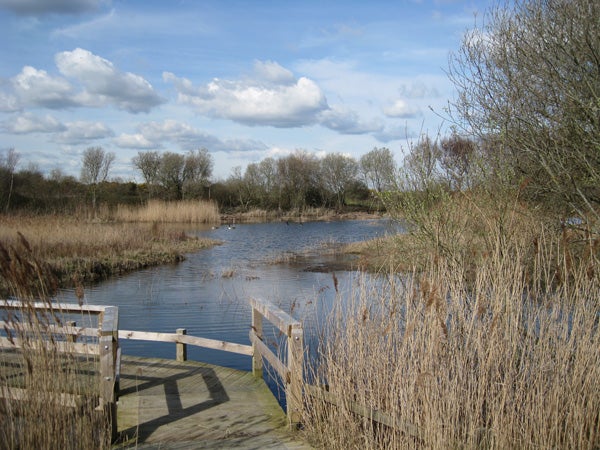 The wide angle end of the zoom range is equivalent to 36mm, about average for a pocket compact. 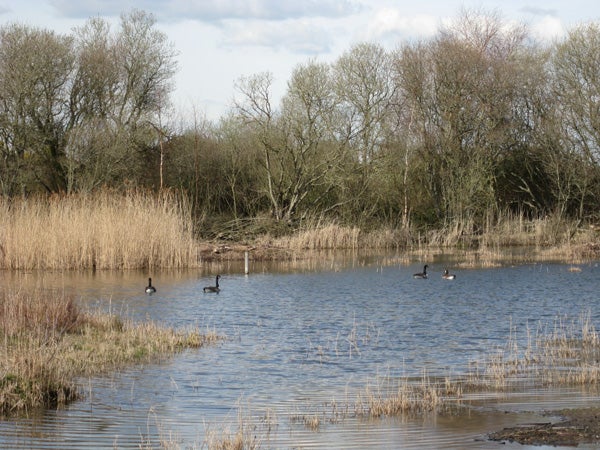 The telephoto end is equivalent to 133mm, slightly longer than average and better for picking up small details. 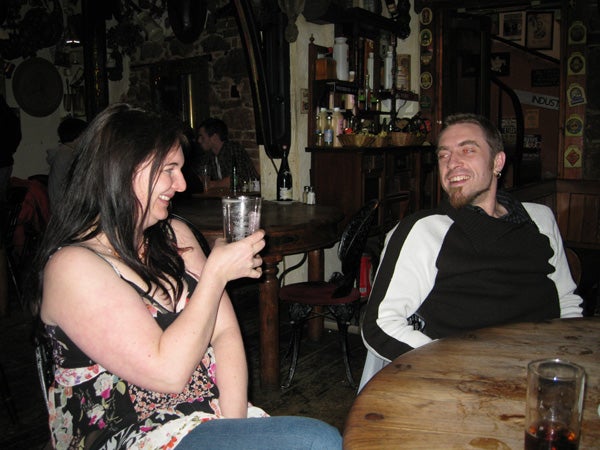 Flash range, exposure and coverage are very good. Red-eye reduction pre-flash was used for this shot, but I suspect Ben is actually Satan, so it probably wouldn’t help much. 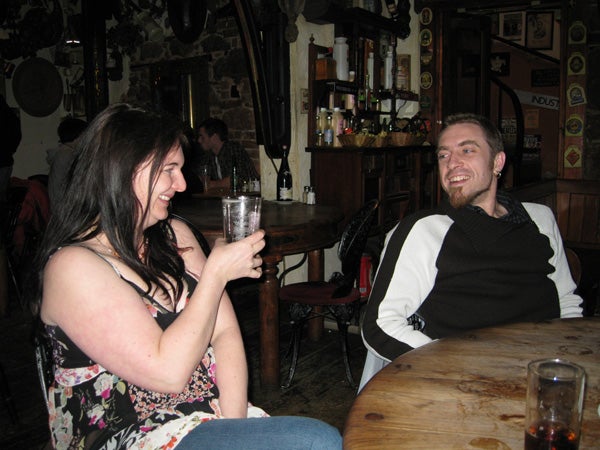 This is the same shot treated using the in-camera red-eye correction in playback mode. 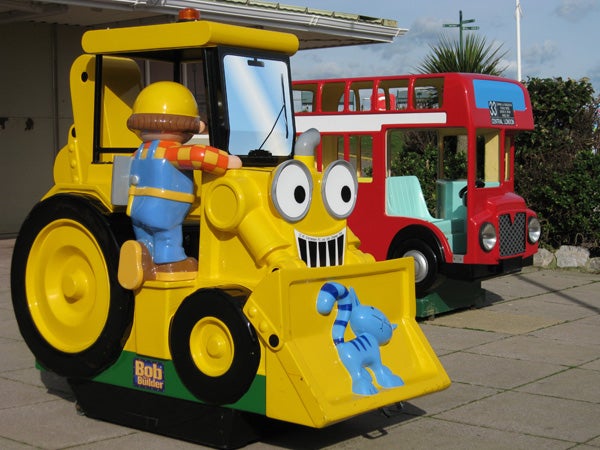 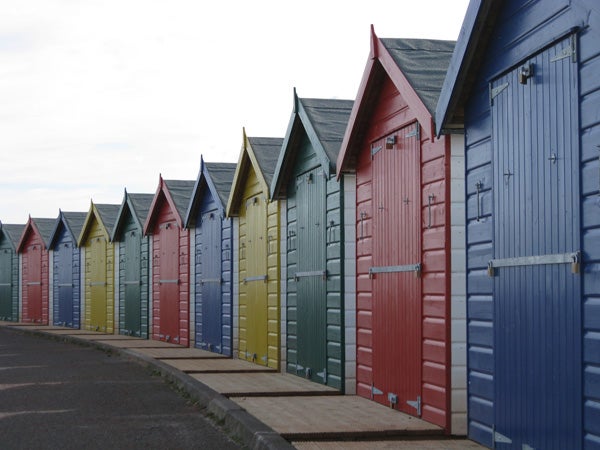 These beach huts are in shadow, and the newly-painted colours look a little muted. 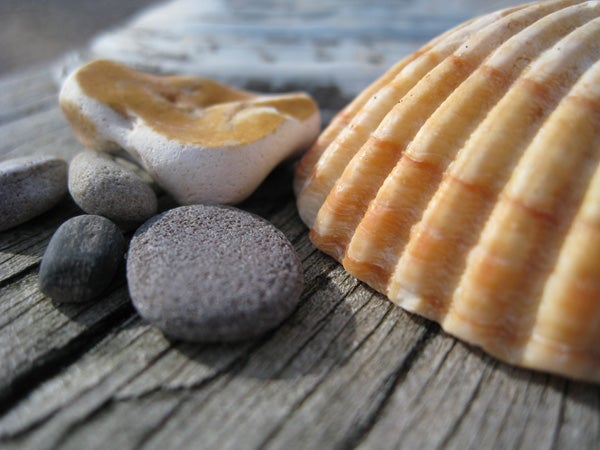