Canon’s Digital IXUS range has been the benchmark for luxury ultra-compacts for a decade. It may not be the market leader at this moment, but Canon is never far from the top, and keeps itself up there by continuously updating its camera range. One of the latest new models is this, the IXUS 105. It is an entry-level model, second from bottom of the IXUS range. It is a 12.1-megapixel camera with a 4x zoom lens, a 2.7-inch 230k monitor and optical image stabilisation. It is currently selling for around £160 on the high street.


If that specification sounds vaguely familiar it’s probably because the IXUS 105 shares most of its features with another recent addition to the range, the more expensive IXUS 120 IS. It shares the same sensor, lens and monitor screen, but the cheaper IXUS 105 is lacking a few of the more advanced features, particularly HD video recording. This in turn means it’s very similar to the IXUS 110 IS. Although the IXUS 105 lacks the “IS” suffix from its name it does still have the same optical image stabilisation system as Canon’s other compacts. 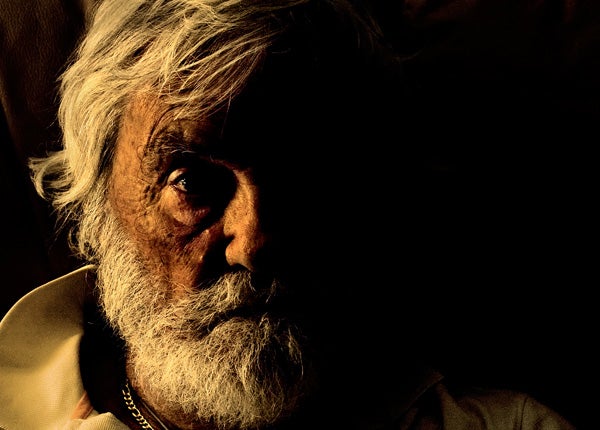 The IXUS 105 also lacks some of the elegant design and top-notch build quality that typifies the rest of the Canon range. The body is mostly aluminium with chrome and plastic trim, but it doesn’t feel quite as sturdy as some of its more expensive siblings. The battery hatch has a rather flimsy plastic hinge, the tripod bush is made of plastic, and the three-position slider switch for mode selection also feels a bit cheap. In terms of overall handling it’s not bad, but the rounded shape and smooth finish do make it a bit slippery and the position of the rear panel controls doesn’t leave much room to grip the camera.

The external hardware is certainly up to Canon’s usual high standard. The compact 4x zoom lens has a focal length range equivalent to 28-112mm, with a maximum aperture of f/2.8 – f/5.9. The monitor may not be the sharpest thing ever, but it is nice and bright, has a very wide viewing angle in all directions and an excellent anti-reflective surface. 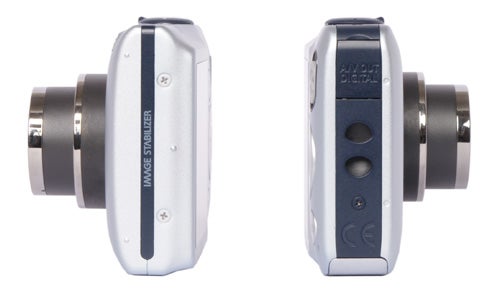 In terms of features the IXUS 105 is, if anything, slightly below average for its class. It has a much more limited range of shooting options than most of Canon’s IXUS range, with only an Easy Auto mode with few menu options, a program auto mode and four very basic scene programs. It has Canon’s usual sidebar menu, but it lacks the slick animated gradient interface of the higher-end models. In Program Auto mode the ISO setting, white balance, metering mode, drive mode and image size/compression can all be adjusted. It also has the usual My Colours option with adjustable RGB, but with only a very limited range of pre-sets.


Main menu options include a a number of AF options including centre-zone or Face AiAF autofocus modes, AF assist beam and AF point zoom. Other settings include the option to turn off red-eye flash, date stamp, IS mode, grid overlay, and the i-Contrast function, Canon’s version of a dynamic range booster which increases shadow detail in high contrast lighting. 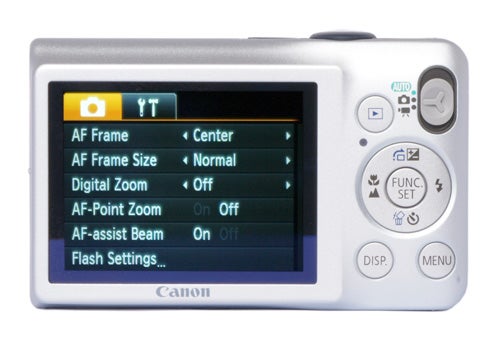 The video mode is quite limited by recent standards. It has a maximum resolution of 640 x 480 at 30fps, with mono audio recorded via a small microphone next to the lens mount. Optical zoom cannot be used while recording. Video is recorded in the relatively low quality Motion JPEG format, rather than the QuickTime MOV format of the higher end models.

The IXUS 105’s overall performance is pretty impressive. It starts up extremely quickly, and is ready to take a picture in well under two seconds. The shot-to-shot time in single shot mode is a little slow at 2.8 seconds, but there’s none of the annoying response delay found with many other cheaper cameras. In continuous shooting mode it can maintain a rate of one shot every 1.6 seconds, which is again a bit on the slow side, but is at least consistent.

The autofocus system is also a tiny bit on the slow side, although only compared to higher-spec IXUS models, but it is accurate and reliable in most normal lighting conditions. Unfortunately its low light focusing is not nearly as reliable, and the AF assist lamp is quite feeble with an effective range of only about 1.5 metres. The flash is also a bit weak, leaving some dark corners in a four-metre-square room, but it does work well at closer range. Battery life is excellent, with the hefty 1000mAh lithium-ion rechargable giving a claimed 240 shots per charge.


As usual with Canon the 105’s saving grace is its overall picture quality, which is excellent and certainly a match for anything else in its price range. The lens has good corner-to-corner sharpness and produces very little wide angle distortion, although there is some noticeable chromatic aberration towards the corners of the frame. Colour reproduction is bright and well saturated with good detail even in brighter colour areas, and dynamic range is surprisingly good for a tiny 1/2.3 inch 12MP sensor. 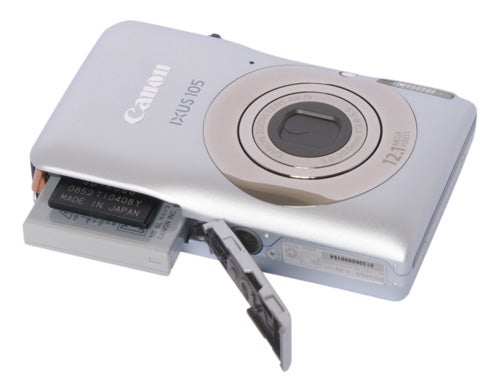 Noise control too is excellent, with very good image quality at 400 ISO and usable images even at the 1600 ISO maximum setting. Colour reproduction remains consistent at all ISO settings.

Although it is near the bottom of Canon’s range and is a bit limited in terms of style, features and performance, the IXUS 105 is a good medium-spec ultra-compact camera for a reasonable price. It may lack the sparkle of the more expensive models, but it more than makes up for it in overall image quality. 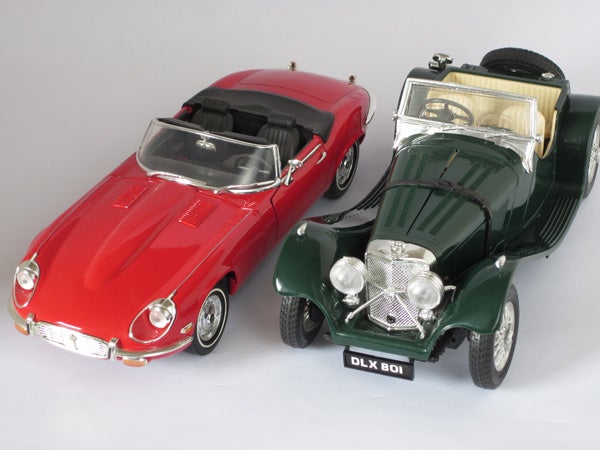 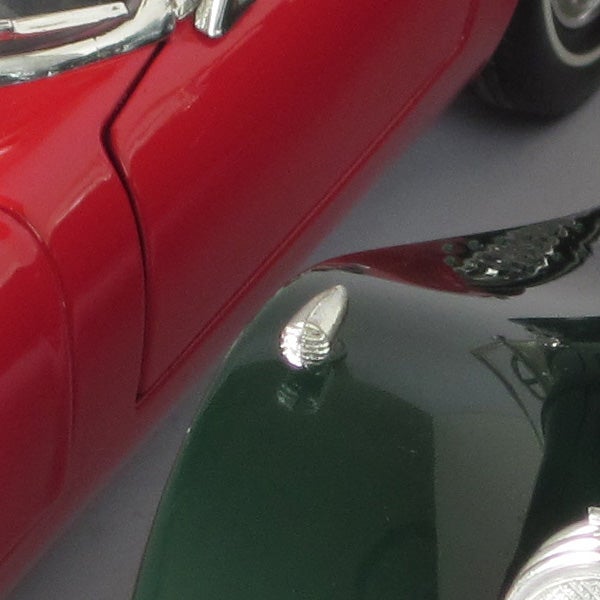 The image quality at 80 ISO is very good, with plenty of fine detail. 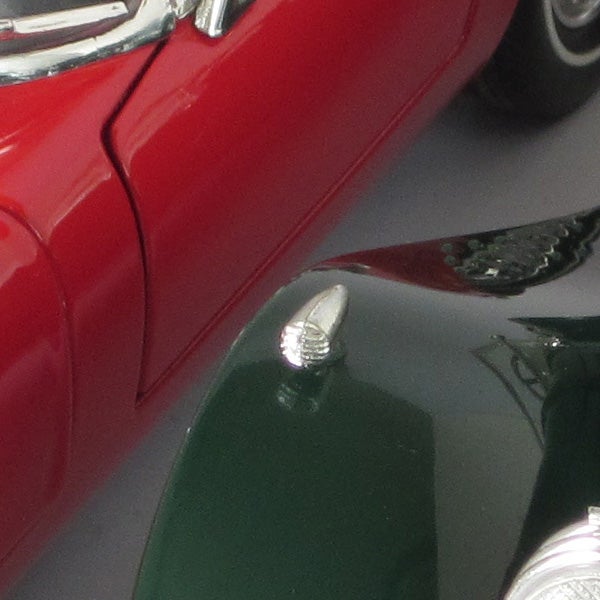 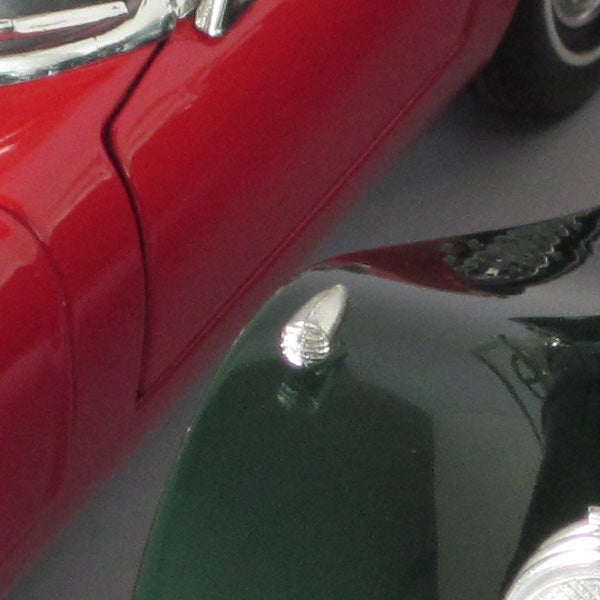 Some very fine grained noise at 200 ISO, but the overall quality is still very good. 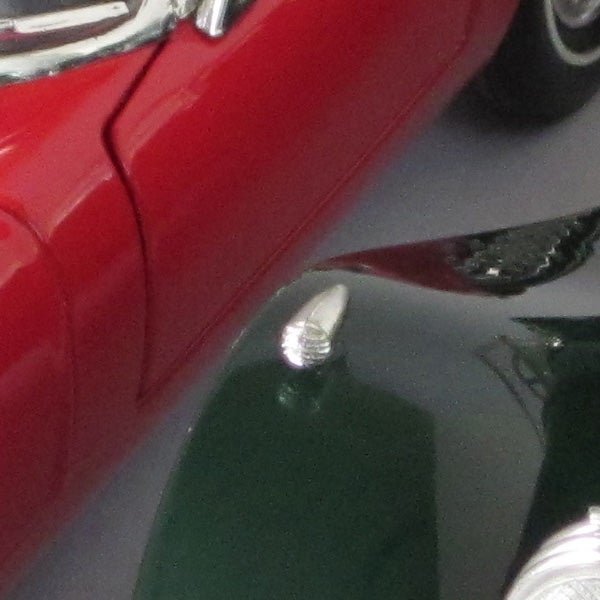 Slightly more fine noise at 400 ISO, but the image is still quite printable. 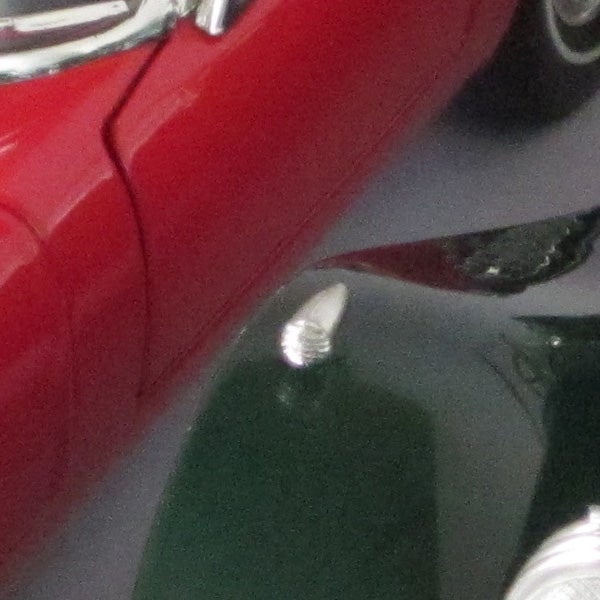 Noise reduction has reduced fine detail at 800 ISO, but colour is still good. 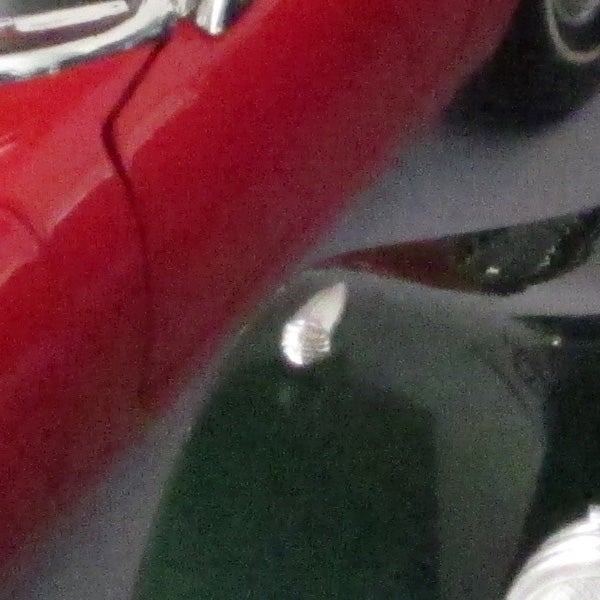 At 1600 ISO there’s no fine detail left, but the image could still be OK for small formats like email. 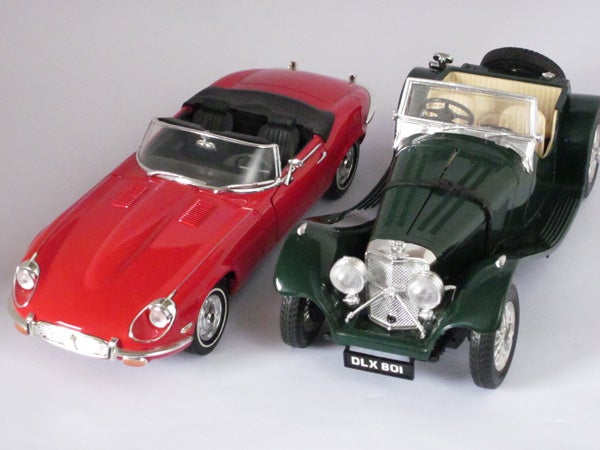 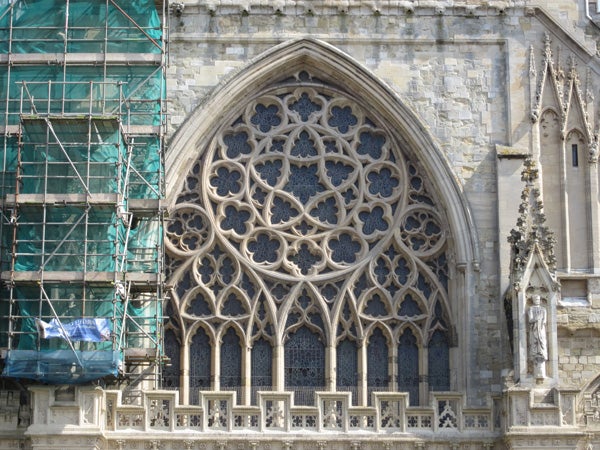 Here’s the usual detail test shot of the West Window of Exeter Cathedral, for you to compare with other cameras. See below for a full res crop, or click for the full sized image. The downloadable file is approximately 3.7MB. 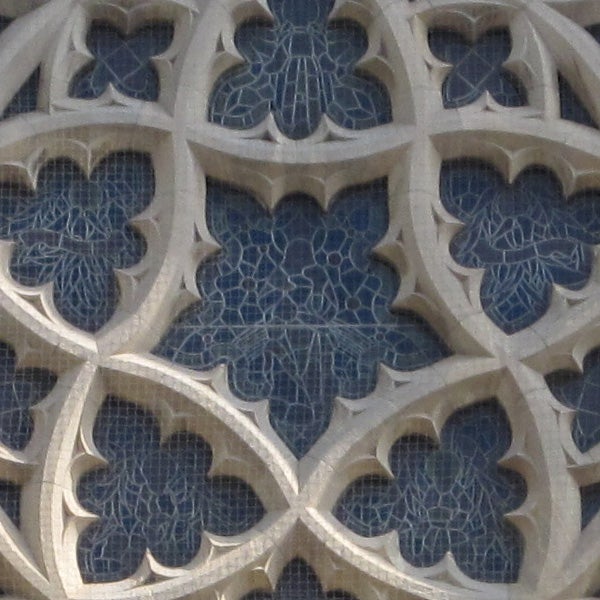 The level of fine detail is very good, but some has been lost to image compression. 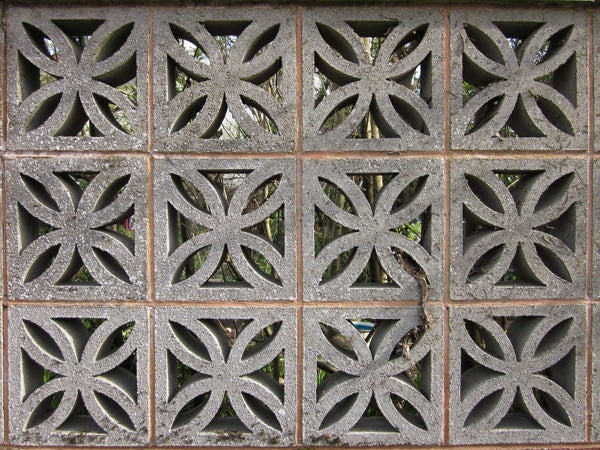 The lens produces virtually no distortion at wide angle. 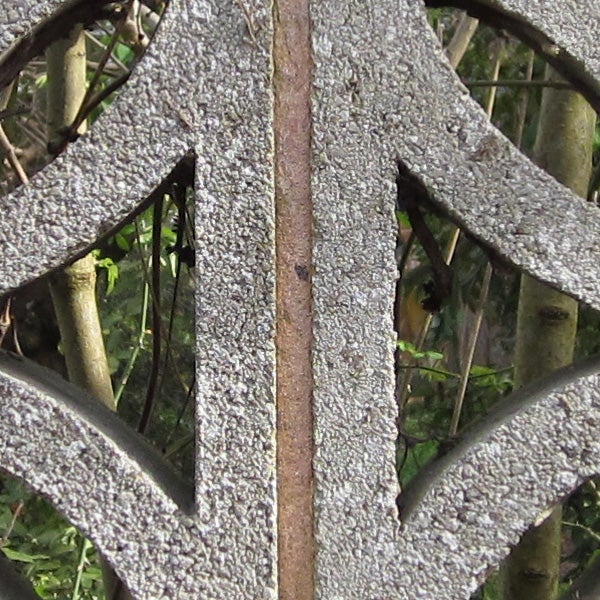 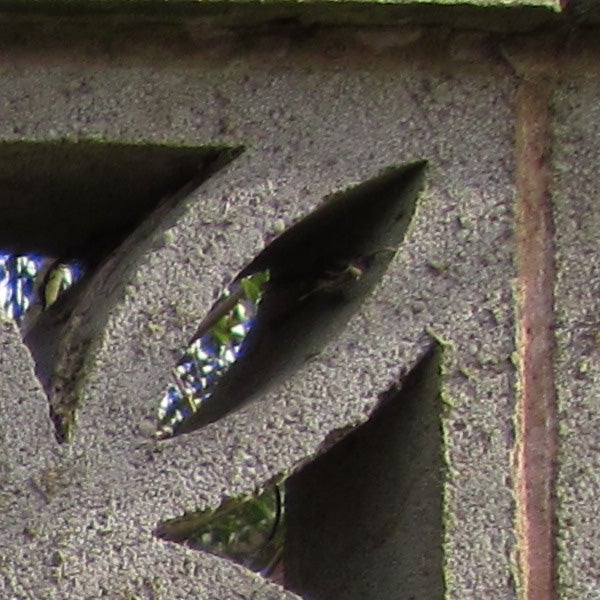 Corner sharpness is also very good, but there is visible chromatic aberration at the edges of the frame. 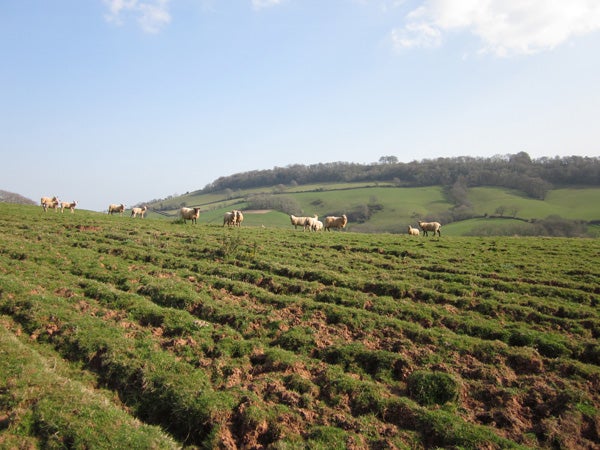 The wide angle end of the zoom range is equivalent to 28mm. 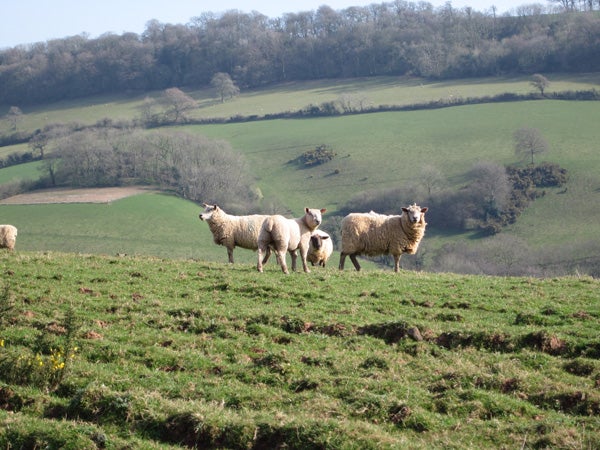 The telephoto end of the zoom is equivalent to 112mm. 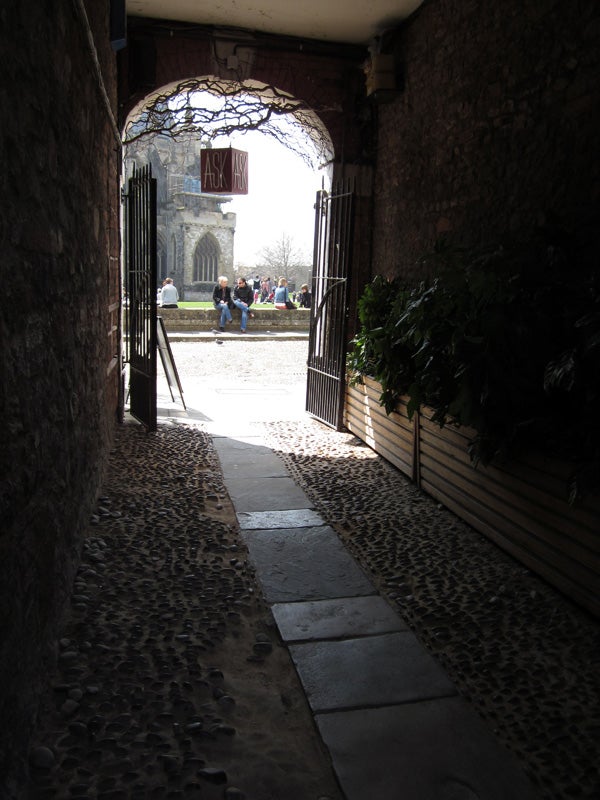 Even with the i-Contrast turned off the dynamic range isn’t too bad. 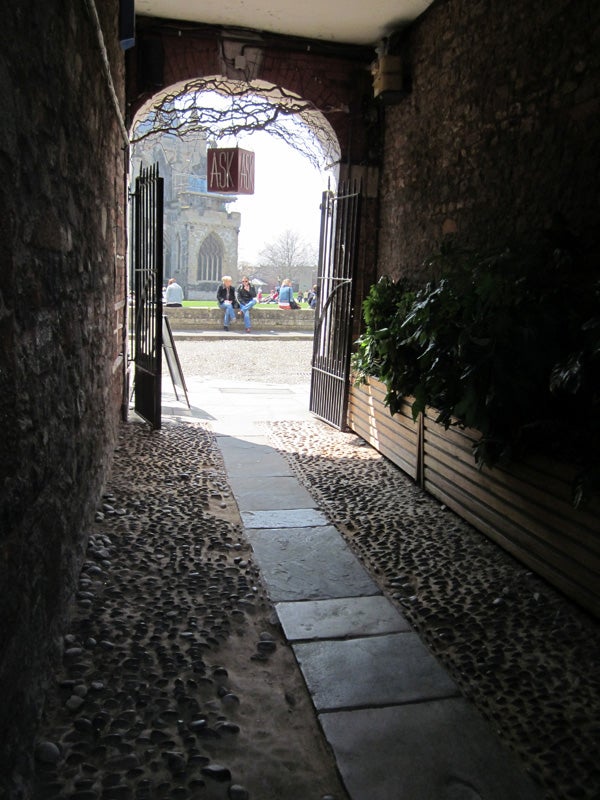 With the i-Contrast turned on there is more detail in the shadow areas. 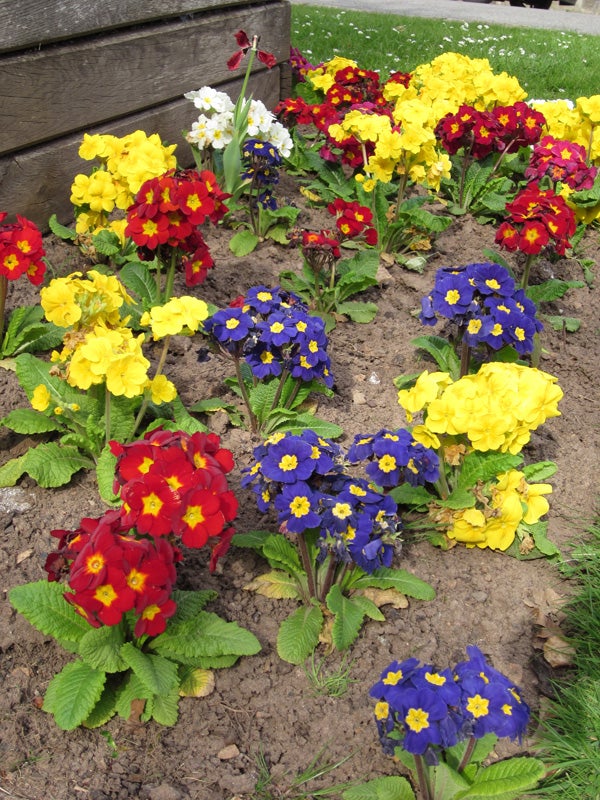 Colour reproduction is very natural, with good saturation and detail.