Personal laser printers are exemplified by being slow and inexpensive, while workgroup machines are fast and pricey. In between is a netherworld of devices which are often neither one thing nor the other. Designed for the small office or workgroup of three to five people, the Canon i-SENSYS LBP6300dn aims to split the difference, offering speed and economy at the same time. 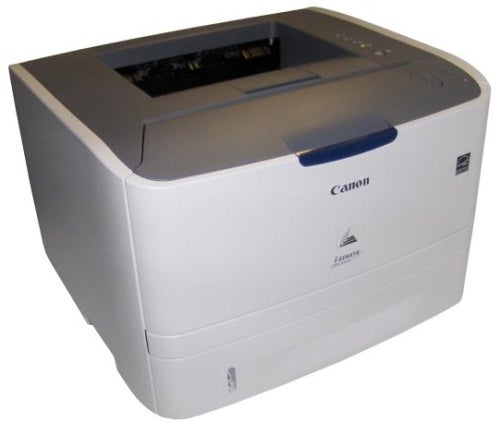 The printer has simple, clean lines and is coloured in white and dark grey, with a blue highlight on the front panel handle. Pull the panel down and you have a 100-sheet multi-purpose tray for special media, but there’s also a 250-sheet main paper tray and a 500-sheet auxiliary tray is available as an option.


The control panel is supremely simple, with four indicator LEDs for power and various error conditions, and an illuminated button to cancel a job. At the back are sockets for USB and Ethernet, but there’s no wireless option on this machine without employing a third-party print server.


Pull down the front, top cover and you have access to the single-piece drum and toner cartridge, which slides down into the heart of the printer and can easily be fitted and removed with one hand. 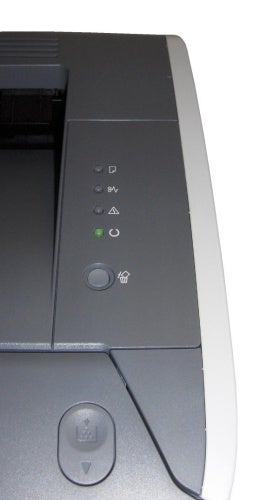 There’s been a trend towards two-part drum and toner cartridges, which allow for longer lasting drums and can take several replacement toners before needing to be replaced themselves. Canon has chosen not to follow this route, which could mean more expensive running costs, though this remains a function of pricing policy, not the physical design itself.


The cartridges are available in two capacities, of 2,100 and 6,400 pages and the higher-yield version can cover more pages than most consumables in this category of printer.


Canon provides minimal support software with the i-SENSYS LBP6300dn, comprising a remote user interface and the driver itself, which is available for Windows, OS X and Linux. The driver offers support for multiple pages per sheet, watermarks and duplex print, which is standard on this machine.

The most surprising specification in the i-SENSYS LBP6300dn is its speed, quoted at 30ppm. This is very fast for this category of machine, so we were expecting a fair degree of wishful thinking on Canon’s part. This was supported by our five-page text print, which took 18 seconds, giving a true print speed of 16.7ppm, but when we ran the 20-page test, the speed increased to 25.5ppm, not a long way off the headline figure.


This speed is, in itself, very good and subjectively the machine seems very quick, with very little hanging around for processing prior to the start of print. It’s unusual to have a machine at this price with a real-world throughput this high. 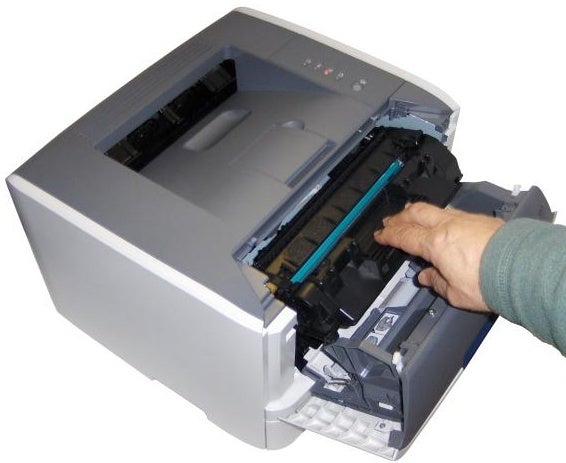 Canon knows a good deal about mono laser print engines, being intricately involved with designs for the engines of many HP printers, as well as its own. We expected good quality print from the i-SENSYS LBP6300dn and we weren’t disappointed.


Text is very cleanly reproduced, with sharp, well-formed characters. The default print resolution is 600dpi, half the 1,200dpi of the Brother, but comparing the two printouts, you’d be pushed to tell. This is due to Canon’s ‘image refinement’ which pushes the effective resolution up to 2,400 x 600dpi.


Greyscale graphics suffer from a poor greyscale gamut. Our test page includes a business chart with four different fill colours, which most mono lasers can distinguish between. Here, though, three of the four show very similar greys, which could be a problem where you’re printing a lot of colour originals.


Surprisingly, the photo print is very respectable, with no signs of banding and some detail in the troublesome darker shadows.


Sound levels aren’t good. Canon claims a noise level of 53.5dBA, but we measured the review machine at peaks of up to 63dBA at 0.5m. This wouldn’t cause any problems if the machine was in the middle of a busy office, but could be intrusive if positioned on somebody’s desk. 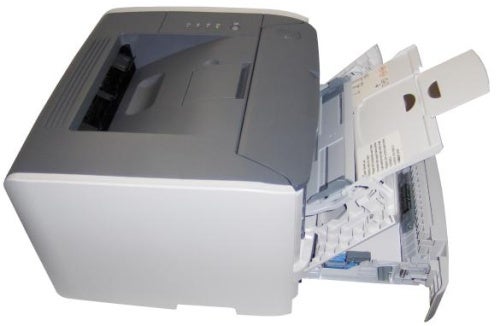 The only consumable you have to consider is the integrated drum and toner cartridge and, if you chose the high-yield consumable, you don’t even need to consider this very often. The cartridge is available for around £120 if you shop around, giving a cost per ISO page of 2.7p, including 0.7p for paper.


This compares reasonably with the Brother HL-5350DN, though the Brother machine is around 0.3p per page cheaper to run.

This is a very sound, small workgroup laser printer. It prints very fast for this category of machine, much faster than we were expecting, in both single-sided and duplex print. The quality of printed output is fair, though there are problems with the range of greyscales it can produce. Photo print is particularly noteworthy, with very few artefacts to blemish the images.


Running costs are also well within normal parameters, as both the running costs and maintenance costs are low. At just over £200, this has to be a very worthwhile mono laser, with its only other blot being the high noise level when printing.