Now that most manufacturers are turning their attention away from tape Canon’s HV20 has managed to remain uncontested for some time as the best HDV camcorder around. Until now. But fortunately for Canon the latest contender to the HV20’s crown is its successor. So if the HV20 offered nearly the pinnacle of high-end consumer HDV, is there any room for the HV30 to show improvement? 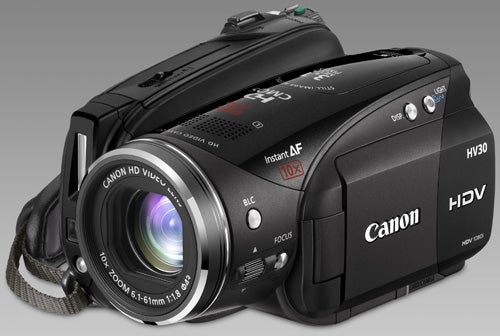 The HV30’s core specifications are nearly identical to the HV20’s. Both use a 1/2.7in CMOS sensor with 2.96-megapixels, and the same lens with 10x optical zoom available. In fact, you will be hard pressed to find many differences beyond the new appearance. The HV30 is dressed in trendy black, whereas the HV20 used more old-fashioned silver, although the build quality is still the same, and not as solid as Sony’s HDR-HC9E. One innovation is that the HV30 now has something called a Multiangle Vivid LCD, although it’s still 2.7in with 211,000 pixels. This has a wider viewing angle than before, and a Hard Coat AR surface treatment, which improves colour vividness whilst reducing reflection.

Also, like the HV20, Canon has audaciously added the Full HD 1080 logo to the side of the box. But whilst the CMOS has enough pixels for 1,920 x 1,080, and does actually use 2.07Mpixels to shoot video, HDV is only recorded at 1,440 x 1,080, so the signal is scaled down horizontally. Still, the extra sensor resolution should still provide a more detailed picture, and was part of the reason why the HV20 was capable of such awesome image quality.

Apart from the new LCD panel, you will be hard pressed to find a significant number of new features on the HV30. The US version has a new 30p recording mode, where the American HV20 only had 24p. But the UK HV20 launched with 25p, so there is no improvement here with the HV30. One minor improvement will be very welcome, however. The little rocker used for zooming on the HV20 was ridiculously small, and Canon must have received considerable complaints about it, as the one on the HV30 is a much better design and considerably easier to use. 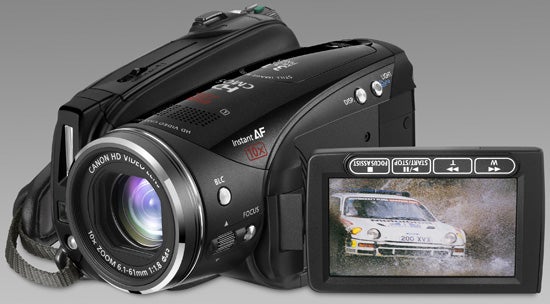 But the HV20 was so good there wasn’t much room for improvement, anyway. For anyone serious about their video, the HV30 has every feature you could want. Whilst it doesn’t have a lens ring for manual focusing, there is a little wheel right next to the lens, which is almost as good for fine manual focus. A full-sized accessory shoe is available, too. This is hidden under a plastic flap, which is a little irritating and likely to break off after regular use. But if you use the shoe regularly you probably won’t care that much anyway. Under another flap near the lens can be found minijacks for an external microphone and headphones.

The HV30 is also packed with manual options. Using the joystick in P mode, you can vary exposure from -11 to +11, and manually control the microphone level. The HV30 also has shutter and aperture priority modes, enabling you to vary the shutter from 1/6th to 1/2000th of a second or the aperture from F2.4 to F8. Whilst you can’t vary these independently, the Exposure control effectively allows this, as pinning the shutter or aperture means it only controls the other function. Alternatively, the HV30 offers portrait, sports, night, snow, beach, sunset, spotlight and fireworks scene modes. There’s a cinema colour mode, too, which changes the colour gamut for deeper blacks, but can’t be used at the same time as priority or scene modes.


Switching between these modes requires a trip to the function menu. This is also the home of the six white balance presets, plus automatic and manual options. The image effects offer vivid and neutral settings for varying colour saturation, a low sharpening mode, a soft skin preset, and a fully customisable option enabling you to vary colour depth, sharpness, contrast and brightness individually, although only by one increment up or down in each case.

Since the HV30 has an identical CMOS and optics to the HV20, and the same DIGIC DV II image processor, we were expecting identical video performance. Since the HV20 had the best image quality of any sub-£1,000 HD camcorder, yet again there isn’t much reason for change. In optimal lighting, the HV30 exhibits just as stunning performance, with rich colours and virtually no signs of compression artefacts, unless you look really closely with an expert eye. The quality is not far off a professional three-chip model, with just the habitual consumer-oriented colour saturation giving away the HV30’s intended market. 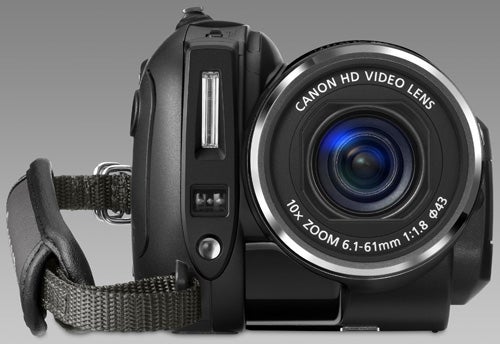 As with the HV20, low light performance is the real revelation with the HV30. In regular interlaced video mode, the shutter is limited to 1/50th of a second, but the HV30 still manages to pick up well balanced colour in a room lit only by a 100W bulb. The image is darker than in good lighting, but there is still not much evidence of noise. Drop down to candlelight, however, and the noise is much more pronounced, whilst the image is very dark, although there is still clear colour differentiation. But then the HV30 has its 25p mode, which allows the shutter speed to be dropped to 1/25th, effectively doubling the light picked up. This makes the HV30’s image much brighter. The candlelight performance then becomes acceptable, and anything brighter is clear and virtually noise free. 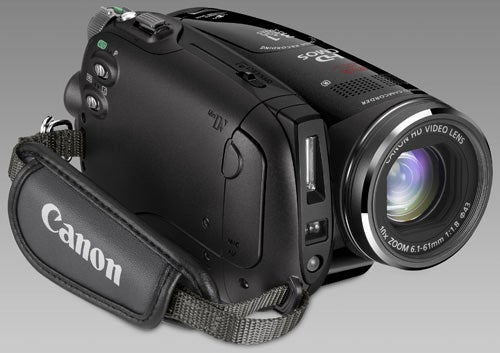 Being HDV, footage from the HV30 will be compatible with virtually any editing software. If you want to watch your footage on a TV, there’s a full-sized HDMI socket. The headphone minijack doubles as an AV output, although you have to use the full menu to switch between the two, and only composite video is supported, not S-video. A proprietary plug provides component analogue video output. In DV mode, you can also record from an analogue video source over the composite connection – a rare feature in camcorder these days.


Canon has clearly heeded the cliché ‘if it ain’t broke, don’t fix it’ with the HV30. Its predecessor was a great camcorder for serious video makers with less than £1,000 to spend. Now the HV30 can proudly take over its place. This could be the last great consumer-oriented HDV camcorder we see, as Canon’s own HF10 has finally allowed AVCHD to meet or even surpass the quality of HDV. But for now, the tape-based format is a safer bet for editing, and if you want to make the best HD video without a professional price tag, the HV30 is the camcorder of choice.