Despite being later than Sony to release a high definition camcorder, Canon has really taken the bull by its horns with recent models. It now has the best HDV camcorder around in the shape of the HV20, and the most well-rounded hard disk-based model we’ve seen, the HG10. But these two models also have a third sibling, the HR10. 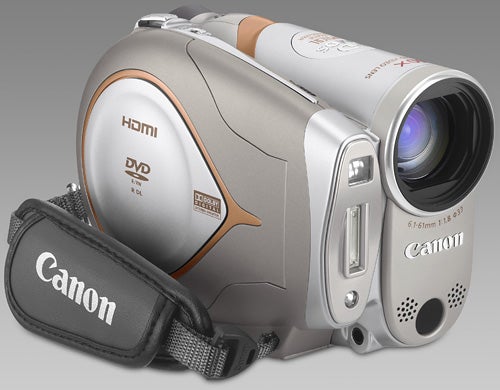 Where the HV20 records to tape and the HG10 to hard disk, the HR10 is a DVD-based version. So Canon now has every format covered, bar the pure Flash-based models offered by Sony and Panasonic. With the pedigree of the other two camcorders in the range, the HR10 could be a shoe-in for another accolade.


Like the HG10, the HR10’s specifications look very promising at first glance. This is another camcorder based around Canon’s 1/2.7in CMOS sensor with 2.96-megapixels. The high-end optical image stabilisation system remains, too, rather than a cheaper electronic version. The lens specification also appears the same, although the filter attachment is 37mm rather than 43mm. 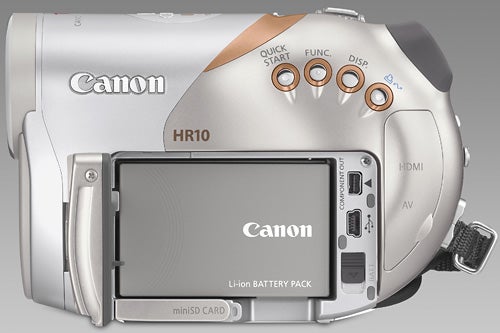 Unlike the HG10, however, the top data rate is 12Mbits/sec, which Canon calls XP+ in this case, rather than the 15Mbits/sec HXP available with the hard disk model. This will have a negative effect on image quality, and is presumably a result of using DVDs for storage. Aside from the necessity for a DVD drive with a faster writing speed, the 8cm DVDs used only store 1.4GB of data, which even at 12Mbit/sec is enough for just 14 minutes of video. An 8cm Blu-ray disc would offer a much healthier 7.5GB, providing over an hour of storage. But whilst Hitachi now has one on sale in Japan, it hasn’t arrived in Europe yet.


Although the HG10 cut a few of the HV20’s enthusiast-oriented features, it still kept the basics. Unfortunately, this isn’t true of the HR10, probably due to the consumer orientation of the DVD camcorder format. There is no accessory shoe lurking under a plastic flap, the microphone input has disappeared, and the AV output has become a rectangular proprietary attachment, so it won’t double for headphone attachment. Canon has also opted for an internal battery with this model, so you won’t be able to fit a larger, longer-life one for extended shooting.

The same range of manual settings is available, however. The controls are in different places to the HG10, with no function dial on the LCD itself, but no less usable. In auto mode, the joystick simply turns on the video light. Switch to manual, and you get access to 12 steps of exposure control and manual focusing, with the latter offering optional Focus Assist. 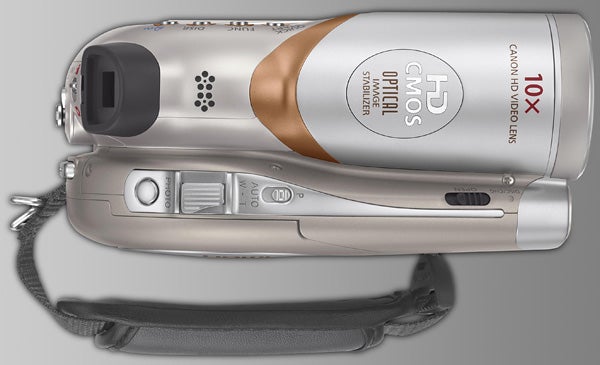 Call up the Function menu, and you can enjoy no less than six preset white balance modes, plus automatic and fully manual. You can choose between the eight program auto-exposure settings, including portrait, sports, night, snow, beach, sunset, spotlight and fireworks. Alternatively, you can select Cine mode, which bolsters the middle of the brightness range, or between shutter or aperture priority modes. The shutter can be varied from 1/6th to 1/2000th, and the aperture from F2.8 to F8, but not both at the same time. You can even choose between the four video compression levels from this menu.


Delve into the full setup menu, however, and a choice becomes available between the standard 50-field format or a 25psf (Progressive Segmented Frame) shooting mode. However, despite Canon calling the HR10 Full HD, as with the other members of the range, this only refers to the CMOS sensor resolution. The AVCHD video is still recorded at 1,440 x 1,080 with anamorphic pixels, and the video will be encoded as interlaced, even if whole frames are being captured by the CMOS sensor. 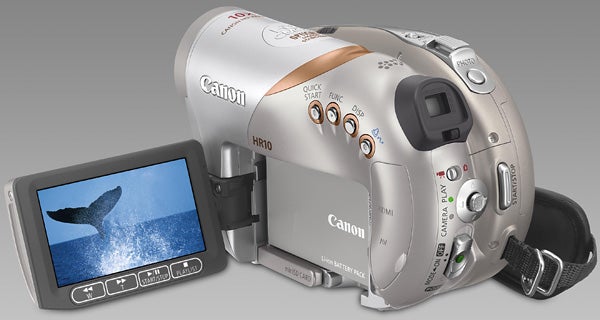 In sunny outdoor conditions, the HR10 acquitted itself as well as the HG10, despite the greater compression of its top XP+ mode compared to the HG10’s HXP. Colours were very faithful, but as with the HG10 detail was noticeably softer compared to the HV20. The AVCHD compression was clearly reducing image sharpness. We also encountered the same jerky motion with the 25psf mode, making it essentially unusable except for very static shots, which was a shame considering that it did improve vibrancy when enabled.


Under reasonable artificial illumination, the HR10 also followed the HG10 closely for quality. The images looked similarly less noisy than those on the HV20 and colours were still very good, particularly if we reduced the shutter speed to 1/25th. But the image got steadily worse as we tried lesser lighting conditions, with even more noise than the HG10 and nasty yellow grain. The latter reduced as we lowered the shutter speed, but we had to go below 1/25th to remove it entirely, which isn’t usually going to be practical. Still, overall the HR10 produces a very good performance for an AVCHD model.

The HR10 offers the usual range of connectivity options for a High Definition camcorder. There’s a full-sized HDMI plug for hooking up to an HDTV digitally, or component analogue if your set doesn’t have this input. Alternatively, a proprietary connector offers compositive analogue and RCA audio, but not S-video. The USB connection can be used to bring video onto a PC for editing, or you can simply pop the disc in your DVD drive. Unfortunately, in either case you have to finalise the disc first, which can take as much as ten minutes, and must be done with the mains adapter attached. 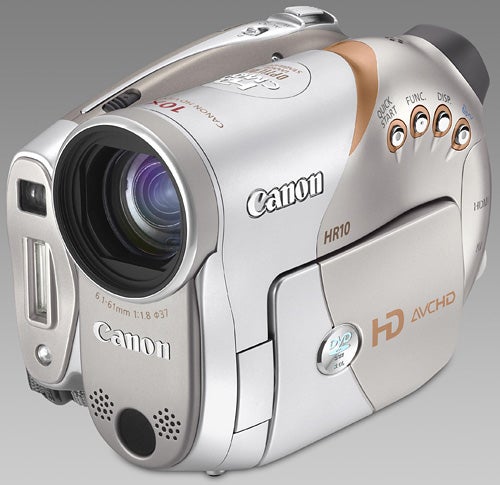 The AVCHD footage can then be edited with the Corel software Canon supplies, which includes Ulead DVD MovieFactory SE. Or you can import it into a number of third-party alternatives, such as Ulead VideoStudio 11 Plus or Pinnacle Studio 11 Plus – but nothing from Adobe just yet, without the use of conversion software. At least, in theory, as we were unable to use either method to import video into our test system. What you also can’t do is pop the disc into a DVD player to watch it, although the PlayStation 3’s Blu-ray drive has been reported as compatible, as has Panasonic’s DMP-BD10.


Although the HR10 continues the high video-quality theme of the HV20 and HG10, it’s not quite in the same league. Aside from the lack of enthusiast features, what really lets it down is the DVD recording format itself. The limited storage has always been an issue with optical disc-recording camcorders, even standard definition ones. But with AVCHD, you don’t even get the compensation of being able to pop the discs into your DVD player to watch them straight away. So, although the HR10 already has quite a reasonable street price, we’d recommend waiting for a Blu-ray model if a disc-based camcorder is what you’re after.