Canon set the benchmark for AVCHD camcorders in 2008 with its groundbreaking HF10 and HF100. But its competitors have been responding with increasingly capable alternatives. So scarcely more than six months later Canon is already updating its range. Although essentially an evolution of the HF10, the HF11 incorporates some important improvements, making it another contender for the best HD camcorder on the market. 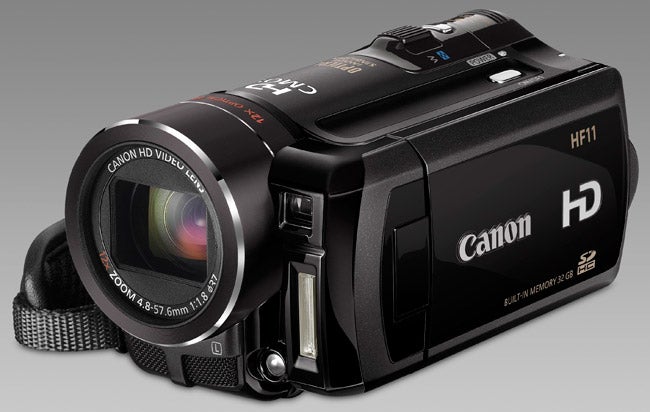 The HF11’s sensor and optics are unchanged from the HF10. It sports the same 1/3.2in CMOS sensor with 3.31-megapixels and Canon HD lens. The first major change is an increase in the maximum video data rate. Like the HG20, the HF11 supports 24Mbits/sec, the highest rate available from the AVCHD format. This won’t produce a quantum leap in quality over the HF10’s already excellent level. But with AVCHD’s greater efficiency than HDV, it will further push the tape-based format into obsolescence. 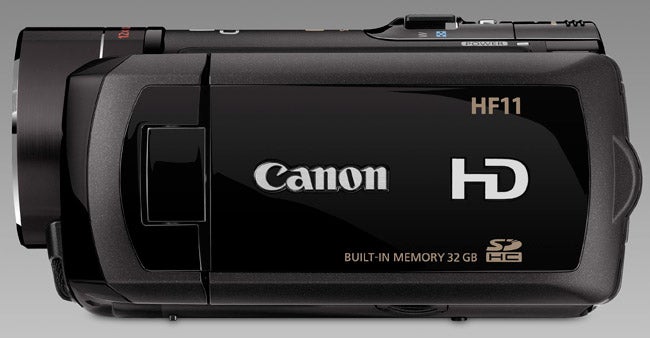 As a result of the new higher rate, HF11 has five quality modes on offer compared to the HF10’s four. The new mode is called MXP+, and sits above the original quartet. So now you have two Full HD options using a 1,920 x 1,080 resolution, and three operating with anamorphic 1,440 x 1,080 – but no standard definition alternative.


The other major difference is the amount of internal memory supplied inside the device. Where the HF10 includes 16GB, the HF11 doubles this to 32GB. So, despite the increase in the data rate of the top quality mode, the HF11 can hold nearly three hours of footage at its best setting, compared to just over two hours for the HF10. This is a very useful amount of storage, and as before, there’s an SDHC card slot available, too, for archiving footage or expanding capacity.

Overall settings and features remain identical to the HF10. But this was already a strong point. If you really don’t want to bother with any settings at all, there is Easy mode, which does everything for you. Otherwise, you can use the Function menu and joystick to call up a variety of manual options. Program mode only lets you alter exposure, or you can select aperture or shutter priority modes for finer tuning. The former offers iris settings from F1.8 to F8, whilst the latter lets you configure the shutter from ½ to 1/2000th sec. Unlike some camcorders, in either of these modes the Exposure control is still available, giving you a very similar experience to full independent control over shutter and iris – although not quite the same.

Two more shooting modes are also available. Cinema mode shifts the gamma to improve the detail in the mid-tones at the expense of dark and light, which is closer to the way film cameras behave. However, you can’t use this at the same time as any of the other modes. The final alternative is to use a Scene preset, which leads you to a further menu where you can choose between the usual options of Portrait, Sports, Night, Snow, Beach, Sunset, Spotlight and Fireworks. 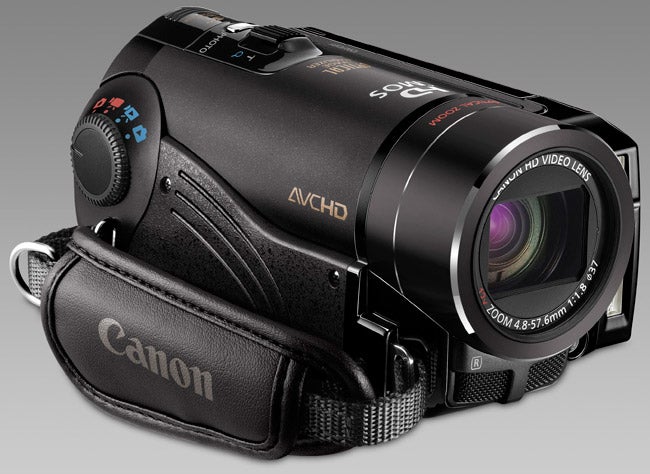 The Function menu also provides access to Canon’s Image Effects. This is where you can tweak colour saturation and sharpening. ‘Vivid’ boosts colour above normal, whilst ‘Neutral’ reduces it, or you can select Low Sharpening. Whilst only one of these presets can be used at once, there is also a Custom mode available which provides independent control over Colour Depth, Brightness, Contrast and Sharpening, but only by one notch up or down from the default in each case. 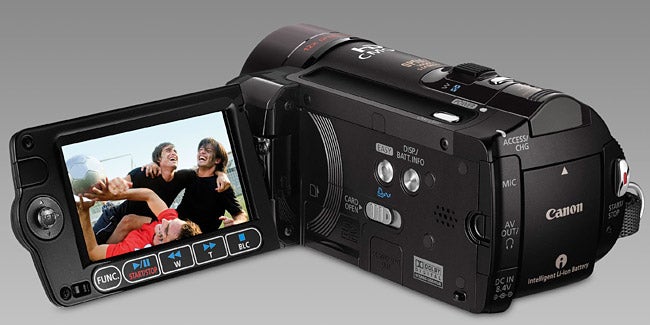 Sundry further options can be found in the full menu. You can switch from 50i interlaced to 25F progressive shooting. Canon uses 2:2 pulldown for the latter, so the signal is still recorded as a 50i file, for greater editing compatibility. But the underlying footage is progressive so won’t suffer from jagged edges on fast-moving objects, unlike interlaced video. Despite the HF11’s small size, it still integrates microphone and headphone minijacks. The latter also doubles as an AV output when hooking up to a TV, switchable in the menu. 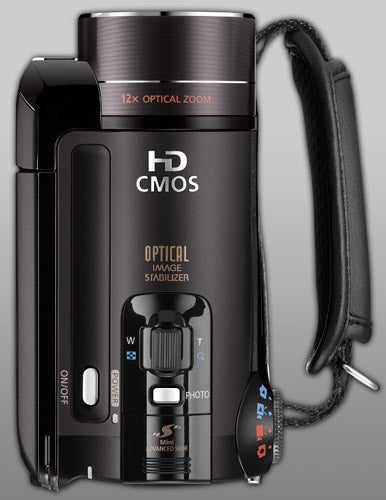 However, the HF10’s few shortcomings are also carried forward to the HF11. There is no lens ring, so manual focusing is performed with the joystick. The focus assist system magnifies the frame automatically to help things out, but you’re still more likely to leave things to the Instant Autofocus system, which is fortunately quick and accurate. The accessory shoe is of the “S” Mini Advanced variety, forcing you to rely on Canon’s proprietary add-ons. We hope that one day Canon will produce a version of the HF11, or HG20, with a full-sized accessory shoe. If Panasonic can fit this (and a real lens ring) on a camcorder as small as the HDC-SD100, Canon has no excuse for omitting one from its models.

But these deficiencies were easily forgiven with the HF10 thanks to its amazing image quality. The new 24Mbits/sec mode offered by the HF11 is intended to improve this still further. If you study the HF11’s footage really closely, it is possible to spot a slightly greater level of detail compared to the HF10. In particular, moving objects look marginally sharper, as you would expect with a 40 per cent higher data rate. But you would really need to be extremely picky to tell the difference in most situations.

Similarly, whilst the HF10 is a great performer in low light, the HF11 doesn’t make significantly noticeable improvements here either. The camcorder’s ability in poor illumination is the best we’ve seen in a consumer high-definition camcorder, especially in 25F mode. This allows the shutter to drop to 1/25th sec rather than the 1/50th minimum available in 50i mode, so the image is brighter and less grainy. Even in very low light the grain is fine and uniform, keeping the footage usable in most conditions. 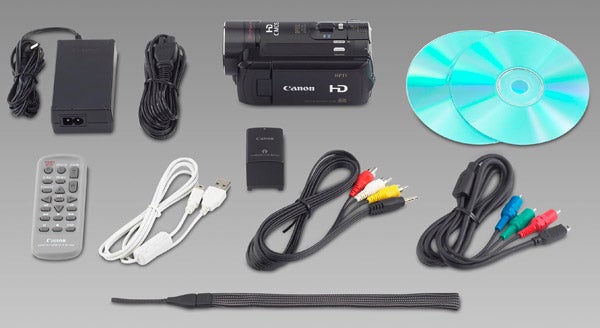 Despite the higher data rate of its footage in the top quality mode, the files recorded by the HF11 proved compatible with every editing app we tried with AVCHD support. If you want to watch footage on a TV, aside from the composite AV output already mentioned, there’s a proprietary component video port, for which a breakout cable is provided, and a mini HDMI port, for which a full-sized adapter isn’t included.


The Canon HF10 and HF100 were the first AVCHD camcorders to offer video quality beyond the best HDV models, and the HF11 isn’t a hugely different model. The greater data rate and extra memory are welcome, making a great camcorder even greater. However, the HF11 is currently priced at £800, where its direct predecessor can now be had for under £600, and its SDHC-only sibling the HF100 for closer to £500. Unfortunately, the HF11 isn’t £250 better than the HF10. So until the HF11’s price goes down, or the HF10 and HF100 are withdrawn from sale, it will remain a great camcorder but not as good value as its predecessors.