When Canon launched the HF10 earlier in 2008, it quickly became the best AVCHD camcorder we have yet reviewed. But released at the same time was an almost identical sibling. Called the HF100, it has two differences to its pricier sibling. First, it’s grey rather than black. We prefer the latter, although the HF100 is hardly unattractive. More significant, however, is the lack of on-board flash memory. This is a key selling point for the HF10 – you don’t need to bother with memory cards, as it has 16GB of flash on board. But the HF100 drops this and returns to the more traditional ‘supply your own SD card’ route. Thanks to this omission, it’s around £100 cheaper, too.


Other than the lack of built-in flash memory, however, the Canon HF100 has the same awesome specification as its pricier stable mate. It has a large 1/3.2in CMOS sensor, although this isn’t quite as big as the 1/2.7in one used in Canon’s previous generation of HD camcorders. The sensor sports 3.3-megapixels, with 2.07-megapixels used when shooting video – enough for Full HD at 1,920 x 1,080. The full resolution is only called upon when shooting still images, which can be captured at up to 2,048 x 1,536. 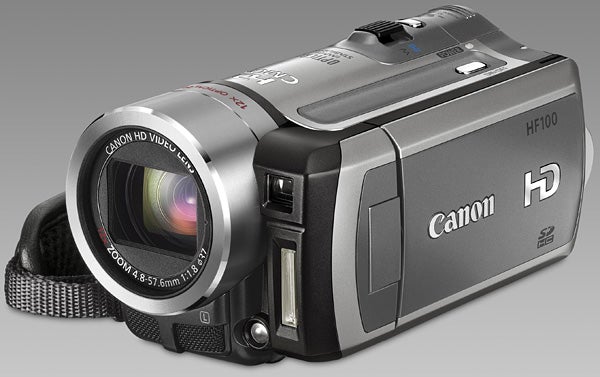 Four recording quality modes are available, all of which shoot at HD resolutions. The top FXP mode uses 1,920 x 1,080, whilst the other three operate at the anamorphic 1,440 x 1,080 resolution familiar from HDV and most previous AVCHD models. Data rates range from a healthy 17Mbits/sec in FXP mode to a miserly 5Mbits/sec in LP, although quality will suffer noticeably in this mode. Even in FXP mode, a 16GB SDHC card will be enough for around two hours of footage, and over six hours in LP.


The HF100 is packed with enthusiast features, too, which is still rare in AVCHD models. Image stabilisation uses Canon’s excellent Super Range Optical system, and the lens provides a healthy 12x zoom. Microphone and headphone minijacks are sensibly placed on the rear, and the battery is non-captive, paving the way for longer-life options than the 890mAh unit supplied. A 1780mAh alternative is available for around three hours of shooting, and the batteries use Canon’s Intelligent system, providing an estimate in minutes of duration remaining.

On the downside, the accessory shoe is Canon’s new “S” Mini Advanced Shoe, rather than a standard-sized one, so you will be forced to use Canon’s proprietary peripherals rather than third-party alternatives. The mounting screw is also rather far forward on the camcorder body, which makes the HF100 unbalanced when affixed to a tripod. There is also no lens ring, making manual focusing a hassle you might not bother with most of the time, despite the Focus Assist mode which automatically magnifies the frame during focusing.


But these niggles can mostly be forgiven thanks to the huge array of manual settings available. These are controlled by a combination of the joystick on the edge of the LCD and the buttons ranged along the bottom. Five shooting modes are available. In P mode, the joystick provides access to a general Exposure control plus manual audio levels. In shutter priority mode, you can vary the shutter from 1/6th to 1/2000th, whilst the Exposure control becomes a combined iris and gain setting with 12 steps. In aperture priority mode, on the other hand, iris can be varied from F1.8 to F8, with the Exposure control becoming a combined shutter and gain setting instead. Neither is quite as good as Panasonic or JVC’s fully manual settings, but both are effective when used in the right conditions.

Cinema mode boosts the mid-range and compresses highlights and shadows, for a look more in keeping with professional camcorders. But unfortunately it can’t be used at the same time as either of the priority modes. Neither can the Scene modes, with Portrait, Sports, Night, Snow, Beach, Sunset, Spotlight and Fireworks modes available.


However, in all but the Scene modes you can also call upon Canon’s Image Effects, which aren’t tacky digital filters but provide useful control over colour and sharpening. Vivid mode boosts saturation, whilst Neutral lowers it. Low Sharpening speaks for itself, whilst Soft Skin smoothes out only flesh tones. The Custom mode lets you vary colour depth, brightness, contrast and sharpening independently, although only by plus or minus one step.


Delving further into the menu, you can shoot in either 50i or 25PF progressive mode, for a more film-like look. There is also a built-in flash to aid night-time photography and LED light for dusk videomaking, although both only have an effective range of a few metres. The Flash triggers automatically when conditions require, but the video light must be turned on manually using the joystick. Strangely, the only function to get a discrete button is Back Light Compensation.

The HF100’s features are undeniably rich, but image quality is where this camcorder really slays the competition. Colour is vibrant, and the slightly smaller CMOS compared to previous HD models is made up for by the true 1,920 x 1,080 recording and higher data rate, which together deliver the most detail we have seen from an AVCHD camcorder. Sony’s HDR-SR12 might shade the HF100 and HF10 for dynamic range, but it can’t match their pin-sharp clarity of image.

Low light was where we expected the HF100 to fall behind larger-chipped Canons such as the HV30. Here again, however, the extra sharpness mostly outweighs the reduction in colour. To further boost low-light performance, engaging 25PF mode allows the shutter to drop to 1/25th without ill effect on motion, and this effectively doubles the light sensitivity over 1/50th and boosts colour noticeably. In this mode, the HF100, like the HF10, provides the best results we’ve seen from any AVCHD camcorder in our ‘living room lit by 100W bulb’ test. Considering how often you might want to shoot family events under these kinds of conditions, here the HF100 is a real winner.


When it’s time to edit, the HF100 provides a USB 2.0 connection to transfer footage to a PC or Mac, and we had no trouble editing our video in any AVCHD-compatible app we tried – which is virtually all of them now, bar Adobe’s. Otherwise, you can use the built-in HDMI connection to view footage on a HDTV, although this is of the mini variety so will require an adapter. A proprietary component output is also available, and the headphone minijack also doubles as an AV output, switchable in the menu. Note that all analogue connections are output only, however, so you can’t record video back to the HF100.


In comparison to the HF10, the similarly-specced HF100 actually works out better value when you factor in the price of memory. Ok, the HF10 can add a 16GB card and give you four hours of shooting in FXP – comparable to a hard disk-based model – whilst the HF100 will need an extra memory card to perform the same feat. But that’s hardly a major hassle, and for this reason the HF100 usurps the higher-end HF10 as our top AVCHD camcorder choice.