Canon has a more cautious approach to new camcorder technology than some manufacturers. Its first HDV model only arrived in 2006, and its first AVCHD models were considerably later than Sony’s. Now Canon is at last turning its attention to the flash memory market with its new HF10, making JVC the only manufacturer without flash-based high definition camcorders.


When Canon focuses on something, you can usually expect good things. The HV20 proved to be the best HDV camcorder around, and its HG10 sibling packaged many of the same features into a hard-disk recording, AVCHD-based model. 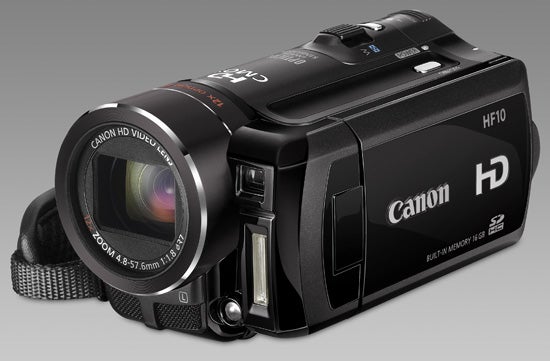 The HF10 ups the ante still further. In fact, Canon is using the model to launch a new concept in camcorder usage. With the portability afforded by flash memory recording, Canon reckons there will be a shift to ‘Freecording’, where you capture all the fun and more extreme events in your life – not just family occasions. But is the Canon HF10 really the start of a video revolution?


The HF10 is built around Canon’s new 1/3.2in CMOS sensor, with 3.3-megapixels. This is slightly smaller than the 1/2.7in unit used in the HV20, HV30 and HG10, which theoretically will put it at a slight disadvantage in low light. The full resolution of the CMOS is only used when taking digital stills, which can be captured at up to 2,048 x 1,536 pixels. Even HD video only requires a maximum of 2.07-megapixels.


In past models, Canon has used the ‘Full HD’ label because the sensor was recording at this resolution, even if the signal was being compressed to a lower resolution. But the HF10 really does record at 1,920 x 1,080 in its top FXP mode. This is compressed to 17Mbits/sec – currently, the equal highest AVCHD data rate with Panasonic’s HDC-SD9 and HS9. There is also an XP+ mode recording at 12Mbits/sec, SP at 7Mbits/sec, and LP at 5Mbits/sec. You can even add 25PF progressive shooting, for true 1080p video. However, there is no standard definition recording option at all. 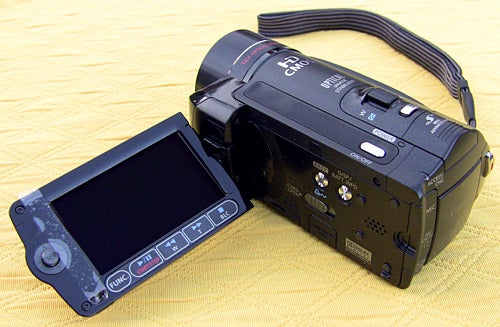 Canon has dubbed the HF10 ‘dual memory’, because as well as having an SDHC card slot, it includes 16GB of onboard flash memory. This is enough for over two hours of footage even in FXP mode, and six hours at the lowest quality setting. So add a 16GB memory card on the top – for around £50 – and you get similar storage to hard disk-based models. You can also copy from the internal memory to the SDHC card, either as individual files, all at once, or all files shot on a specific date.


As this is a high-end model, Canon calls upon its Super Range Optical Image Stabilisation, which cuts out vibrations at three different frequencies. There are two types of autofocus available, too. Instant AutoFocus uses a range sensor for very quick focusing, but you can switch it off in favour of the usual system which operates through the lens for greater accuracy but slower response. For still images, a small flash is built in, and an LED-based video light can also be turned on when shooting in complete darkness.


Since the battery isn’t captive, there are options for extended life, such as a 1780mAh unit which is enough for three hours of shooting. Canon has also now implemented intelligent battery life reading, so you can see exactly how much power is left in minutes.

Sony has been dumbing down its consumer models, allowing Canon to steal its thunder with semi-professional champions such as the HV20 and HG10. The HF10 mostly carries on this tradition. Minijacks are available for connecting an external microphone and headphones, and audio levels can be adjusted manually. Canon’s usual array of manual settings is available, using the joystick on the edge of the LCD. 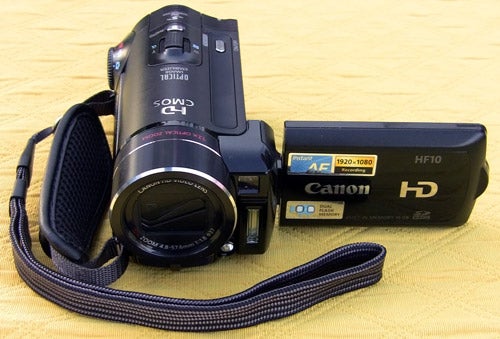 In Program mode, the Exposure control changes shutter and aperture simultaneously. But you can also call upon shutter priority mode, where the shutter can be adjusted from 1/2 to 1/2000th, or aperture priority mode, where the iris can be varied from F1.8 to F8. In either of these modes, the Exposure control then varies the feature you haven’t set (aperture and shutter respectively) from -11 to +11, with a bit of gain thrown in. It’s not quite the same as Panasonic’s completely independent shutter and iris, with gain on the top, as there is no indication of what Exposure actually refers to. But it’s almost as flexible.


The other two main shooting modes are the Scene presets, which include Portrait, Sports, Night, Snow, Beach, Sunset, Spotlight and Fireworks, plus Cinema mode. The latter adjusts the colour curve for a more film-like look, which can give some nice-looking results in certain conditions, for example where you want more detail in low-contrast areas. Unfortunately, you can’t use this with any of the other modes, but you can add Image Effects on the top. These include a Vivid mode which boosts saturation, a Neutral mode which lowers it, Low Sharpening, Soft Skin, and a custom option that lets you vary colour depth, brightness, contrast and sharpness from -1 to +1. 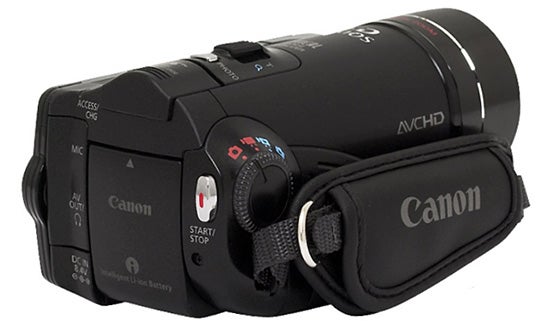 Further settings are available via the full menu, such as toggling 25PF or Instant AF, although you won’t need to change these very often. For the complete novice, however, Canon has also added an Easy mode, where everything is configured for you – although this hasn’t been accompanied by the shooting guides or face recognition now starting to find their way onto Sony and Panasonic camcorders.


So the HF10 has lots of control available for the connoisseur, but there are a few notable omissions. Whilst there is an accessory shoe available, this is now a proprietary “S” Mini Advanced Shoe, rather than standard sized. Canon claims this is to save space, and a range of accessories will be available, such as the DM-100 shotgun microphone. But an adapter will now be required to attach third-party video lights and microphones. The HF10 also lacks a lens ring, instead calling upon its joystick, which is quite fiddly. But at least this is enhanced by Focus Assist, where the frame zooms in automatically whilst you adjust, and back out when you’ve finished. The tripod mount is also too far forward – again, because of space constraints – making tripod usage a little unbalanced.

We weren’t able to run our usual set of controlled tests on the HF10, as our testing occurred at the European launch of the camcorder held in Morocco. But we did get to spend two days shooting in pretty much every kind of setting you might encounter. In the best of conditions, the HF10 produces an incredibly sharp image, thanks to its 1,920 x 1,080 resolution and higher data rate. The detail even surpasses the HV20, with colour fidelity about the same (not surprising, as both use the DIGIC DV II image processor).

Lower light was going to be the true test, however, with the HF10’s slightly smaller CMOS and AVCHD’s usual tendency to turn video noise into unsightly artefacts. Although the HF10 isn’t going to give Canon’s professional models sleepless nights, it did exceed our expectations, picking up good colour even in night conditions lit by a few tungsten bulbs. Best of all, although there is grain visible in low light, it’s fairly monochromatic and fine. This is nowhere near as unpleasant as the multicoloured grain produced by some camcorders in poor illumination. 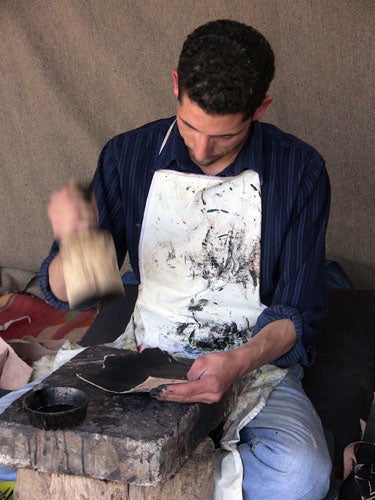 The HF10 is also well endowed with connectivity options, including mini HDMI, component and composite analogue video, although all of these are output only. For editing, you can either pop the SDHC cards into a reader or hook up via USB 2.0. Neither Ulead VideoStudio Plus 11.5 nor Pinnacle Studio Plus 11.1 had any trouble reading and editing the video files we had recorded, even when shot in progressive mode at the top FXP data rate. However, Adobe Premiere Elements 4 isn’t compatible and even Adobe Premiere Pro CS3 doesn’t have AVCHD support without MainConcept’s MPEG Pro HD 3.1 plugin. If you don’t have any of these, Canon also supplies its own software called PIXELA Image Mixer 3 SE, which has some modest editing abilities, including transitions and titling.


Without a doubt, the HF10 is the best AVCHD camcorder yet produced by any manufacturer. It’s not perfect in every respect, but it ticks more than enough boxes to be highly desirable as a serious video tool or point-and-shoot camcorder companion. With its excellent image quality, healthy range of manual controls, small size and keen price, the Canon HF10 is the high definition camcorder we have all been waiting for.