What is the Canon PowerShot G9 X?

Back in 2009, Canon revitalised the enthusiast compact camera market with the PowerShot S90, a pocket-sized model with lots of external controls, raw format recording and above-average image quality. With its unusually fast f/1.8 aperture at wide-angle and configurable round-lens control dial, the design was widely imitated, and perhaps no more so than by the Sony Cyber-shot DSC-RX100 in 2012. But Sony’s trump card was the addition of a 20-million-pixel 1in sensor giving vastly improved image quality, resulting in a dynasty of cameras that instantly eclipsed Canon’s S-series and triggered a wholesale shift towards fitting larger sensors into compacts.

It took until 2014 for Canon to respond with the G7 X, which with its 24-100mm equivalent f/1.8-2.8 lens and 1in sensor is a worthy, if not entirely successful pretender to the RX100 series’ crown. Then towards the end of 2015 Canon added two more models to its range, sitting above and below the G7 X. We reviewed the high-end G5 X in
January and liked it for its SLR-like design, integrated electronic viewfinder and extensive controls. Now it’s the G9 X’s turn in the spotlight: a lower-end model that has the distinction of being the slimmest camera with a 1in sensor.

Indeed on the face of it, the G9 X is the spiritual successor to the S-series. It manages to squeeze a 20.2-million-pixel 1in sensor in a truly pocketable body that, at 98×57.9×30.8mm and 209g in weight, is barely larger than the S120 – the last model in the old line. In the current market, its closest competitor is the Sony Cyber-shot RX100 II, which despite being more than two years old is still widely available at a similar price.

However the G9 X largely eschews the physical buttons found on its predecessors and main competitor in favour of substantially touchscreen-driven operation. This will, I suspect, strongly polarise opinions and put off many prospective users. But before we get into this too deeply, let’s take a look at what the G9 X has to offer. 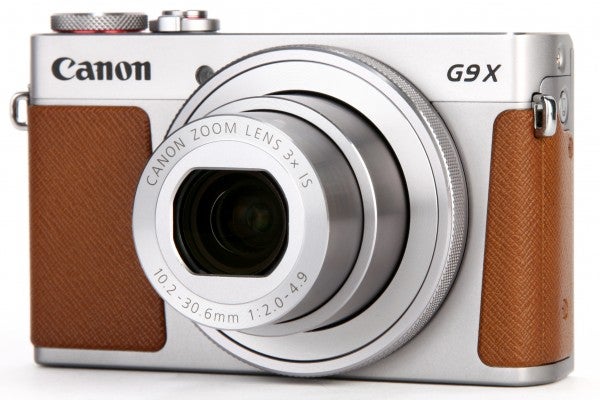 Like many recent fixed-lens compacts, including Canon’s own G3 X, G5 X and G7 X, the G9 X is built around a 20.1-million-pixel 1in CMOS sensor. It offers a sensitivity range of ISO 125-12800, and files can be recorded in both JPEG and raw formats.

The 28-84mm equivalent lens has a maximum aperture of f/2-4.9. While this looks impressively fast at wideangle, it drops off very quickly as you zoom, to f/2.8 at 35mm equivalent, and f/4 at 50mm. The lens includes a built-in 3-stop neutral density filter, which can be used for shooting with large apertures in bright light, or to slow down shutter speeds for increased motion blur in still images. Perhaps more importantly, it’s also useful to convey a more natural impression of motion during movie recording. The ND filter can be engaged manually by the user, or set to auto so the camera can use it whenever necessary.

Compared to other pocket cameras, though, the lens looks a little limited in terms of both range and aperture. For example the Sony Cyber-shot RX100 II has a longer 28-100mm equivalent f/1.8-4.9 zoom, and Canon’s own G7 X has a 24-100mm equivalent f/1.8-2.8 lens that’s both rangier and much faster. Essentially, this is the main trade-off Canon has made to achieve the G9 X’s slender frame. On a more positive note, the lens does at least offer the same range as the 18-55mm kit zooms that come with most APS-C DSLRs. 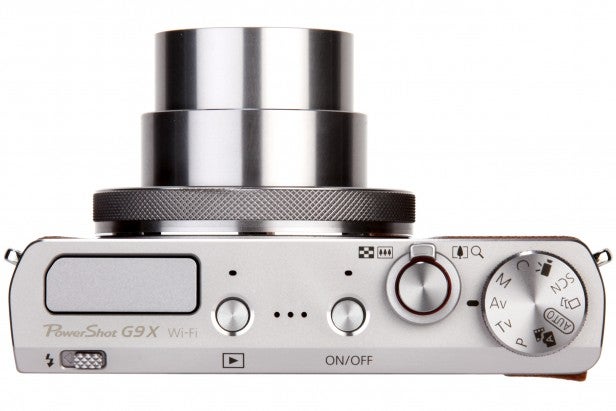 Continuous shooting is available at up to 6fps. This sounds pretty impressive, but this being Canon, it comes with some caveats. You’ll only get this speed shooting JPEG files, and furthermore, with focus and exposure fixed at the start of a burst. If you want the camera to refocus between frames the speed drops to a still-respectable 4fps, however if you wish to record raw images, it slows right down to less than 1fps. Compared to Sony’s RX100 II, which can shoot at 5fps in raw, this is embarrassingly slow. The saving grace is that the G9 X’s short lens doesn’t really lend itself to action shooting in the first place, so this lack of speed is much less of a concern than it is on Canon’s G3 X superzoom.

A full complement of exposure modes is available via a top-plate dial. Program, shutter priority, aperture priority and manual modes are available for enthusiast photographers, joined by an array of scene modes and full auto shooting for beginners. Canon’s somewhat gimmicky ‘Creative Shot’ mode also makes an appearance; this takes five shots with every press of the shutter button, applying different processing filters and compositional crops to each. Occasionally it might come up with something interesting.

The G9 X can of course record Full HD video at 1920×1080 resolution and 50fps or 30fps, with sound recorded via a pair of microphones beneath the top-plate. It’s possible to zoom and refocus the lens during recording. In most modes the camera controls exposure settings, but there’s a dedicated movie position on the top dial allows you to take full manual control. A nice touch is that the touchscreen can be used to adjust settings during recording, so no button or dial clicking spoils your soundtrack.

Wi-Fi connectivity is built-in, with Canon providing more functionality than most other brands. Naturally you can make a connection to a smartphone or tablet for sharing images or controlling the camera remotely, and there’s even a dedicated button on the side of the camera for this purpose. But it’s also possible to transfer images between Canon cameras, or print directly to a Wi-Fi enabled printer, if you have one. 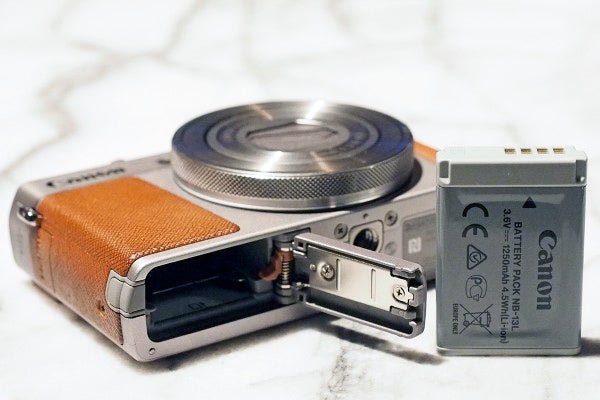 With its predominantly metal body shell and milled metal dials and controls, the G9 X feels robust and well-made. It looks good too, with Canon’s signature subtle red accents around the mode dial and shutter button adding a touch of class. Our review sample was supplied in a rather handsome brown-and-silver finish, but a more sober all-black is also available. In your hand, though, the feel is let down by the hard plastic used for the grip areas; I’d have preferred a softer rubberised finish.

When it comes to shooting with the G9 X, it very quickly becomes apparent that this is a very different animal to the old S-series models, or the higher-end G7 X. While the control dial around the lens and the conventional exposure mode dial are present and correct, the back of the camera is quite different. Most importantly, the combined D-pad and rear dial has gone, with a simple column of four buttons taking its place. By default the top button activates video recording, although its function can be changed when shooting stills. Those below it access the main menu and on-screen quick menu, and cycle through information display modes.

Almost all settings are changed using the touchscreen in conjunction with the round-lens control dial. Main exposure settings – shutter speed, aperture, ISO and exposure compensation – are changed by tapping their on-screen touch buttons and rotating the dial. Alternatively tapping another on-screen button placed within easy reach of your right thumb cycles the dial’s function through controlling each in turn. Most other functions require a press of the Q Menu button, at which point the required setting can be selected using the touchscreen, and changed either by touch or using the lens dial. Other on-screen buttons are used to lock exposure lock, activate manual focus or turn on the touch shutter control. 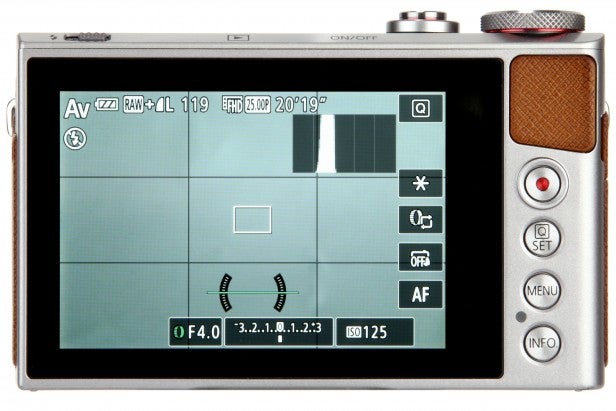 This is an unusual operational paradigm for a camera that’s apparently aimed at enthusiasts, and after using it for several weeks, I’m still not totally convinced it’s successful. It works quite well when you get used to it, but it’s not as quick or intuitive as more conventional setups. Don’t get me wrong here; I’m no anti-touchscreen Luddite, and find them extremely useful on most cameras. I’m just not particularly happy with being forced to use one for almost all camera operations, all the time, rather than as a complement for physical controls. This is compounded by the fact that the touch buttons are quite small and not especially well spaced, so it’s a bit too easy to tap the wrong one accidentally. This also makes the G9 X impossible to use as anything more than a point and shoot when you’re wearing gloves outdoors in winter, although to tell the truth, the Sony RX100 II’s tiny physical buttons aren’t much better.

I particularly keenly felt the lack of a D-pad during image playback, which ironically is an area when it’s usually helpful. But the touchscreen simply isn’t as responsive as I’d like for scrolling though images and zooming in to check detail. Deleting images is infuriatingly circuitous too, requiring a press of the rear ‘Q’ button followed by a couple of touch-button taps. Canon could do with improving its interface here – other manufacturers do rather better.

The self-consciously stylish G9 X is heavily reliant on its touchscreen, with relatively few external controls

Design: A symmetric arrangement of buttons, microphones and a speaker on the camera’s top illustrates Canon’s emphasis on design

Touch Controls: Most of the camera’s settings are controlled via on-screen touch buttons

Mobile Wi-Fi Button: Placed on the side of the camera, this is dedicated to establishing a connection quickly to your smartphone

Battery: The small NB-13L Li-ion pack is rated for 220 shots, and can be topped up using either the supplied mains charger, or in-camera via USB

Connectors: A flap on the side conceals micro USB and micro HDMI ports for connection to a computer or TV

Flash: A small built-in flash unit pops up from the top plate, released by a sliding switch