The G7X Mark III is a great little camera with bags of features and charm. It's a pocket-friendly shooter with a one-inch sensor, great image and video quality, and a host of features that appeal to both stills and video shooters. At £700 it’s not cheap, so if you’re on a budget, check out the older model if you don’t need the advanced video features.

What is the Canon G7X Mark III?

Canon’s Powershot G Series is its range of flagship compact cameras and, along with the G5X Mark II, the G7X Mark III is its latest member.

While the G5X is focused more on stills photography, this cheaper model has set its sights on appealing to vloggers, who found its predecessor’s combination of a one-inch sensor and flip-up screen to be a handy combination for their YouTube creations.

Canon has built on many of the existing G7X Mark II features, but it’s made a few crucial tweaks and upgrades that should see this camera’s popularity soar to even greater heights. 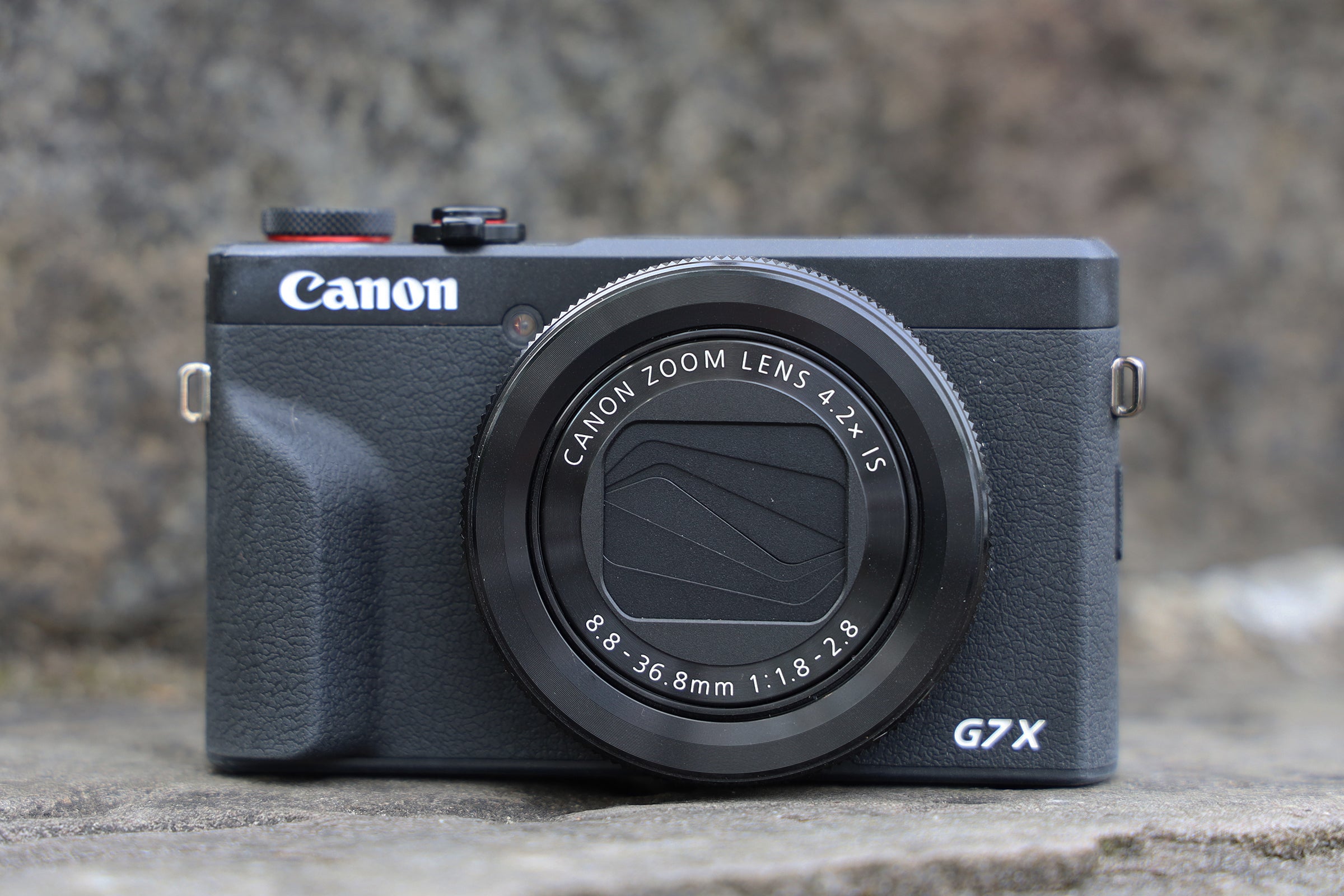 For a start, there’s uncropped 4K video recording, which joins a host of Full HD video shooting modes. Perhaps even more excitingly is the ability – finally – to be able to plug in an external microphone, something which has been demanded for years, but so far has proven to be elusive among one-inch cameras on the market.

Finally, there’s the price of the camera – it’s not cheap by any means, but at around £699, it’s still a good chunk of change less than you’ll be asked to fork out for the Sony RX100 VII, which has also recently gained a microphone input.

At the heart of the G7X Mark III is a large, one-inch type sensor. It’s coupled with a 4.2x optical zoom lens – which may not sound like a lot, but offers a very flexible 24-100mm equivalent focal length range, which should be enough for capturing a decent variety of subjects. The lens also boasts a nicely wide aperture range of f/1.8-2.8, which is great news for low-light shooting. These specifications have been brought across from the G7X Mark II, so we’ve already seen how decent this pairing is.

Nicely portable, the G7X Mark II should easily fit in most pockets, giving you quick access to high-quality shooting without necessarily having to rely on your smartphone. There’s something here for most kinds of shooters, too. Enthusiasts are well-catered for by the semi-automatic and manual options, while beginners can flip straight to auto and let the camera do the work for them. 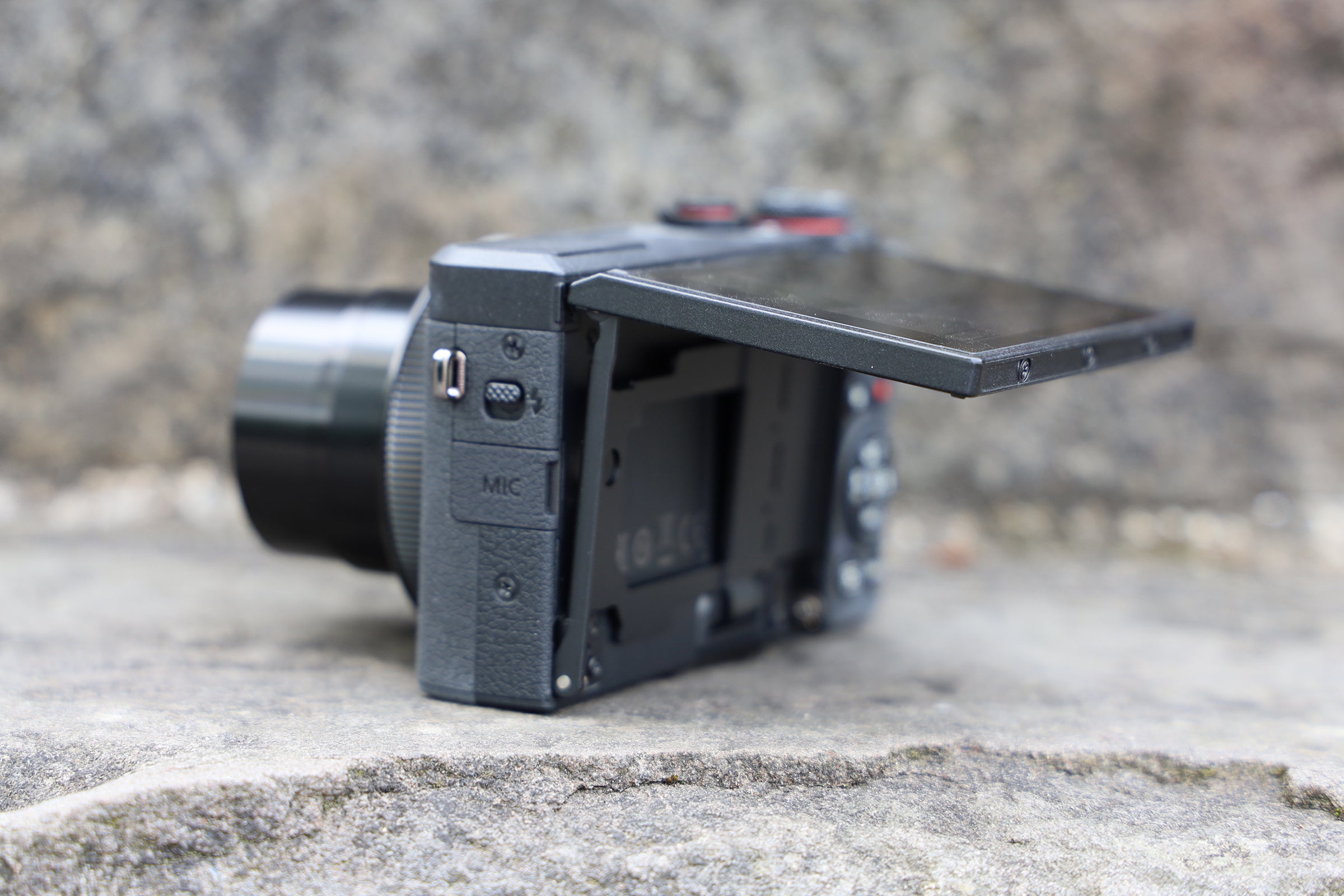 It’s the video features which have seen the biggest upgrades here, with 4K shooting that’s been boosted by a faster Digic 8 processor than the G7X Mark II. Video-lovers will also rejoice at the fact that unlike some of Canon’s other models, such as the EOS M50, the 4K video is uncropped, giving you the full scope of the lens to work with.

An interesting new feature is that vertical video recording is supported, which is appealing if you primarily shoot for platforms like Instagram stories. On top of that, you can also live-stream to YouTube without having to go via a third-party app.

Being able to plug in an external mic is something that a lot of vloggers and video users had been asking for for a while, but it’s still not a perfect solution. With no hot or cold shoe to be seen on the G7X Mark III, there’s nowhere to mount your mic (or other accessory). Not such a big deal if you’re using a wireless radio mic, but otherwise it’s not the most elegant of solutions, and you’ll need to find a bracket to mount the microphone (as you will on the Sony RX100 VII).

While not a new feature, it’s worth also mentioning that the battery can be boosted by USB, which is useful for charging on the go, especially if you are using the video features a lot. There’s no headphone input socket, but given that the vast majority of vloggers are the subject of their own videos, and don’t wear headphones, this is unlikely to be a big deal-breaker.

Screen and viewfinder – The Canon G7X Mark III may lack a viewfinder, but its tilting screen will keep vloggers happy

Just like with previous G7X models, there’s no viewfinder on the G7X Mark III. If that’s a dealbreaker for you, then it’s worth checking out the G5X Mark II.

The screen is one of the features of the G7 series that has appealed to vloggers before, and it’s the same here – it tilts to face all the way forward, meaning you can easily compose your musings as you record video. 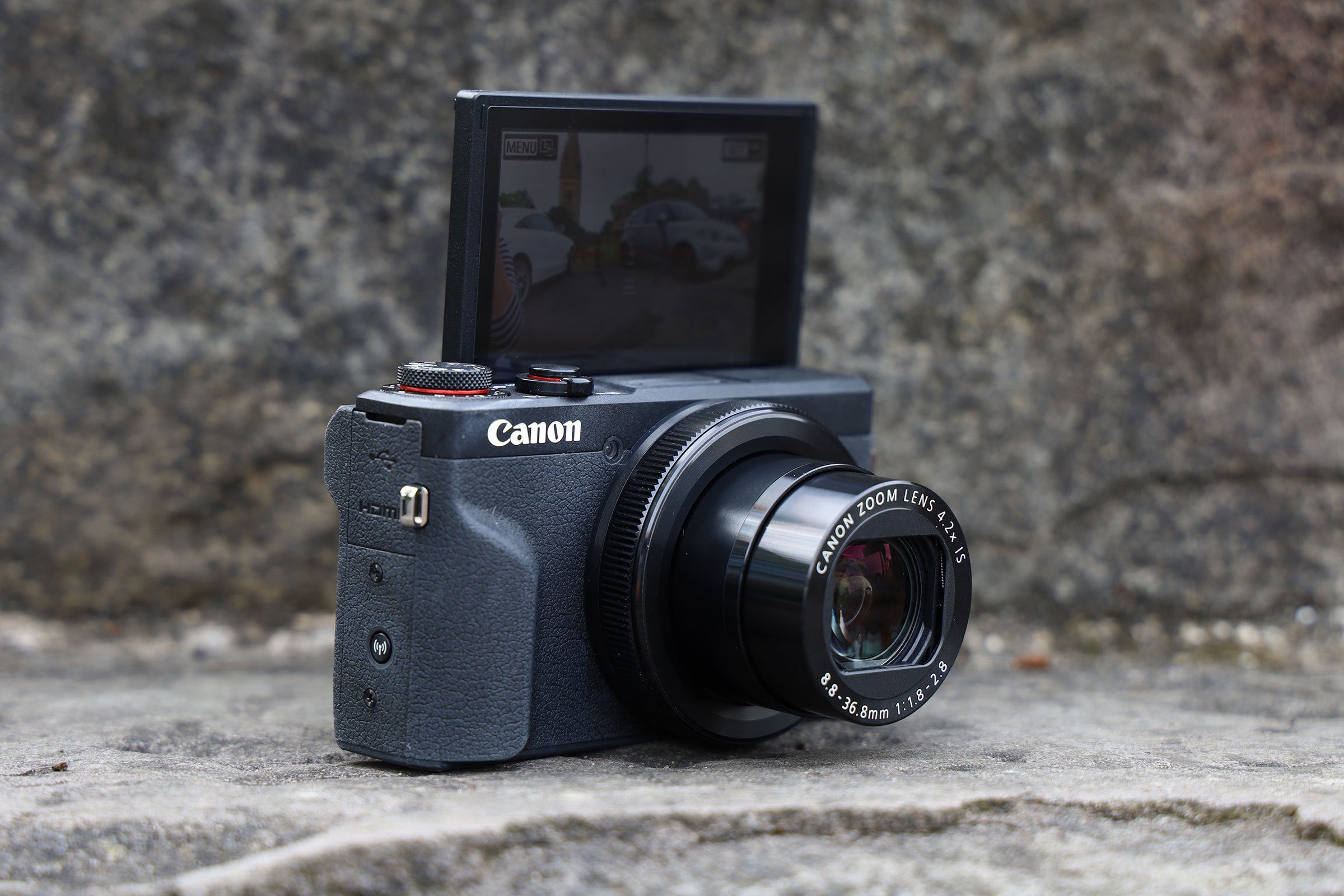 A new feature for the G7X Mark III is the addition of an on-screen video record button, which is much handier than trying to position your hand in an awkward way to reach the dedicated button on the back of the camera.

You can also tap around the screen to change the focus point – both in video and stills – as well as making changes in both the main and quick menu.

With a large sensor and a wide-aperture lens, we’ve always been big fans of the G7X series image quality – and as these features have not changed for the G7X Mark III, we had every confidence that the quality would continue. Having an f/1.8 aperture lens allows you to keep the ISO to as low a level as possible, even when shooting in low light conditions

Images display a good degree of dynamic range, with plenty of detail in most shooting conditions. Having a wide aperture means you can create attractive shallow depth of field effects, and you can also focus fairly close to your subject too. On the whole, the all-purpose metering system does a good job of keeping exposures well-balanced, white the automatic white balance setting generally gets colours on the right side of accurate, too. The tilting screen is useful for vlogging, but it also has its uses when shooting stills – allowing you to position the camera low to the ground without having to put yourself in an awkward position

Low light shooting is also pretty good, with a good degree of noise reduction being employed without removing too much detail. This is a camera which is being pitched as a vloggers camera, but it’s also a fantastic take-everywhere camera that puts in a good performance for stills shooters too. It’s a great travel camera. The G7X Mark III can focus quite quickly, and is also adept at blurring backgrounds for a pleasing shallow depth of field effect

As for video quality, there’s further good news here too. The uncropped 4K works well with image stabilisation to provide smooth and clear footage, while autofocus does a good job of keeping up with moving subjects – so long as they’re not ridiculously erratic in their movements.

The inbuilt sound is useable, especially if you’re shooting indoors or in quiet environments, but if you’re a dedicated YouTuber, an external microphone is definitely worth investing in.

One negative point here is that 4K video appears to only be available in the dedicated video mode, which gives you good some control, but not quite the amount available in the semi-automatic/manual modes.

So, for example, if you want to set a specific aperture, then you’ll be restricted to recording Full HD via aperture priority / manual mode.

Should I buy the Canon G7X Mark III?

Premium compact cameras have remained fairly popular in recent years, and rightly so. While your smartphone will likely do a good job in most situations, there’s still a lot to be said for having a ‘proper’ camera’s handling, controls and superior optics with you.

With a range of fantastic features, there’s a heck of a lot to like about the G7X Mark III, and not that much to dislike. Image quality is excellent, while the video features are second-to-none for this type of camera – well, at least until we review the pricier Sony RX100 VII. 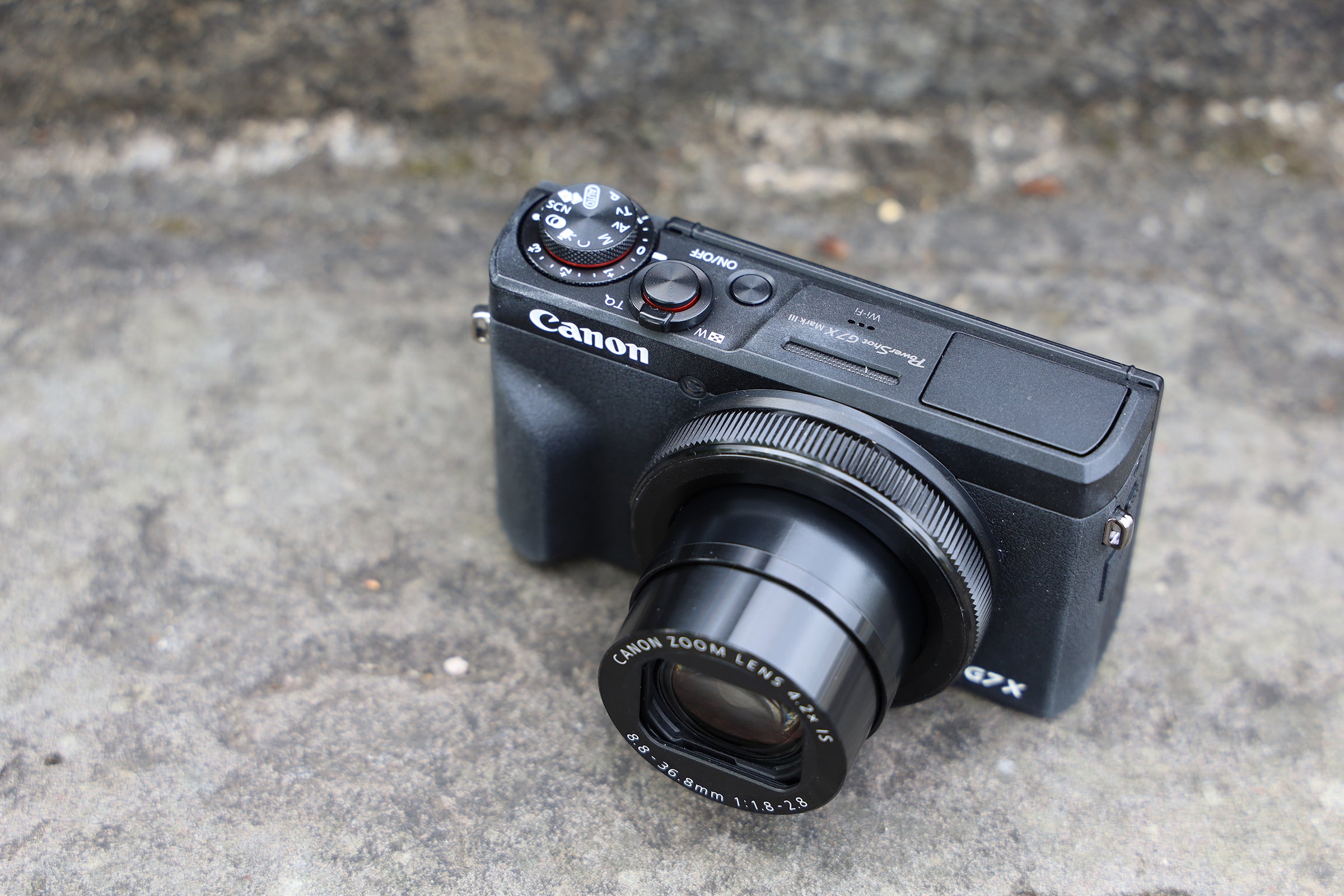 That said, whether you’ll want to upgrade from its predecessor depends on the type of photographer you are. If you’re primarily somebody who shoots stills, the fact that the Mark III keeps the same sensor and lens as we’ve seen previously suggests that there’s not much to gain from buying the new camera.

Indeed, if you’re looking for a new travel or everyday camera, keeping an eye on the Mark II is a good way to save some money too. But if you’re a dedicated vlogger, the introduction of 4K video, along with the audio input, is a bit of a game-changer – and makes the G7X Mark III a great buy.