Canon’s HF10 captured all the headlines when it was launched last month. But, Canon has brought out other Flash memory-based camcorders as part of its ‘freecording’ strategy and at the top of the new standard definition range is the FS11. It’s tiny, light, and reassuringly portable, weighing around 300g with battery. But the Panasonic SDR-S7EB-K is even smaller, and quite a bit cheaper. Does Canon’s FS11 have the extra features to warrant its higher price?


Unlike the HF10, the FS11 is based around a traditional CCD rather than a CMOS. However, it’s a small 1/6in model with 1.07Mpixels. This provides 1,152 x 864 stills, and as this camcorder shoots standard definition at 720 x 576, video requires less than the full resolution. An electronic image stabilisation system is used, which isn’t as effective as the higher-end optical versions. Canon also quotes an incredible 45x ‘advanced zoom’, which isn’t quite the same as a digital zoom. The lens itself is only capable of 37x. 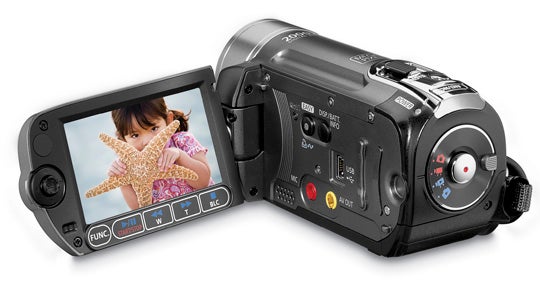 Canon achieves the extra 8x factor by using a smaller area of the CCD. However, a digital zoom crops into the sensor to achieve its extra magnification, so dropping below the native video resolution. But Canon’s Advanced zoom uses 710,000 pixels for wide shots (in 16:9 mode), dropping to 480,000 pixels for extreme 45x telephoto. This is still more pixels than required for 720 x 576 video. So while light sensitivity will be reduced, there should be no noticeable loss of detail. If you do like your video blocky, the FS11 also has a ridiculous 2000x digital zoom available. But we couldn’t make out what we were shooting at all when we used it.


As it is part of Canon’s ‘freecording revolution’, the FS11 is Flash memory based, and offers a Dual Flash system similar to the HF10. It also includes 16GB of memory built in, which is enough for three hours 40 minutes of video at the top 9Mbits/sec XP setting, and over 10 hours in the lowest 3Mbits/sec LP mode.


It also has a slot for SDHC cards. You can record to either, and copy footage from the built-in memory to SDHC, although not the other way round. Canon’s other new models in the FS range are variations on this theme, with the FS10 integrating just 8GB of memory and the FS100 none at all, leaving you with only the SDHC card slot for storage. Other than that, the three have the same features.

A tiny camcorder like the FS11 will be almost exclusively aimed at point-and-shoot recording. But it still includes a few features for those who want to take a little more trouble over their video making. The FS11 has mini-jacks for microphone and A/V out. However, this doesn’t double as a headphone socket, and while you can call up an audio meter, there is no control over levels, so this merely lets you know your external mic is working.


Also, where Canon’s HF10 makes up for its small size by moving over to a smaller, proprietary accessory shoe, the FS11 misses out on this feature entirely. The mic mini-jack is also underneath the LCD, so cabling could interfere with operating its controls.


The FS11 incorporates a smaller subset of Canon’s usual manual controls. The joystick on the LCD panel edge provides access to an exposure control with increments from -11 to +11, manual focus, and turning on the LED video light. There’s a separate button for backlight compensation. 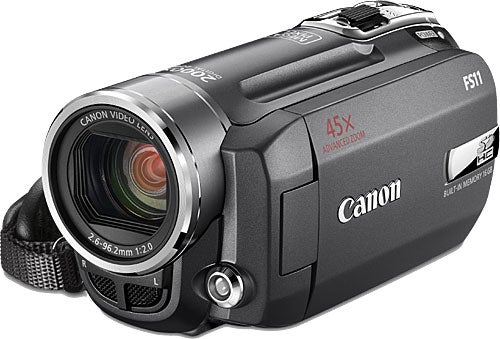 Turning to the Function menu, you can choose between Program AE mode, Shutter priority mode, and eight Scene modes, including Portrait, Sports, Night, Snow, Beach, Sunset, Spotlight and Fireworks. Shutter priority allows speeds from 1/6th to 1/2,000th in video mode, though the aperture priority mode found on many Canon camcorders is absent.


All other controls require a trip to the full menu, although you will rarely need to change anything here. Alternatively, you can choose Easy mode which turns off all user settings. The FS11 also sports Canon’s new Intelligent battery system, so you get a detailed readout of exactly how many minutes of power you have left – something Sony has had in its favour for years.

With the FS11’s 1/6in CCD, we weren’t expecting particularly great video performance, despite the DiGiC DV II image processor. In bright outdoor conditions, colour was reproduced faithfully enough, although the detail was a tad soft. Despite Canon’s claims about Advanced Zoom, the softness was slightly more noticeable at extreme telephoto. 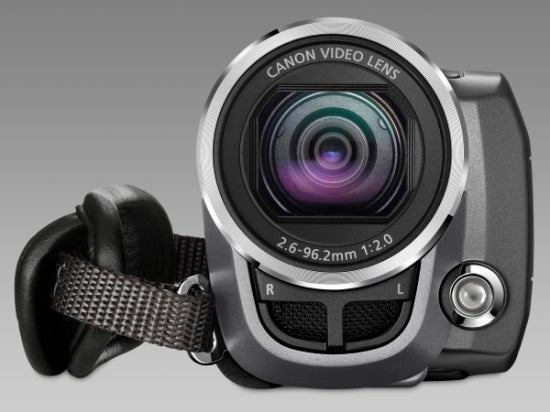 However, in lower light there was a fair amount of grain visible, and this increased as the illumination decreased. In a room lit by a single tungsten bulb, a lot of multi-coloured noise was evident. Unfortunately, low light performance is a perennial problem with small 1/6in CCDs, and Panasonic’s SDR-S7EB-K has similar issues. Yet, the FS11 maintains more colour in lower light, at the expense of grain, where the Panasonic’s video looks washed out but a little less noisy. The FS11’s video light helped a lot, but its range is short.


When it comes time to edit footage, you can either transfer footage to SDHC and insert that in your editing system’s card reader, or hook up via USB 2. The FS11 records regular MPEG-2 to MOD files, so most video editing applications will have no trouble handling the footage, including the Windows Vista version of Movie Maker. The A/V mini-jack comes with a breakout cable sporting composite analog video and stereo RCA audio, for connection to a TV.


Canon has embraced Flash memory with gusto in the last couple of months. However, where the HF10 is a groundbreaking device, the FS11 is merely good in its class. Video performance is marginally better than Panasonic’s SDR-S7EB-K, and it has more features. But where the latter will actually fit in a jacket pocket, the Canon FS11 is a little too portly. With a 16GB SDHC card costing around £50, and the FS100 costing over £100 less than the FS11, you are also paying a premium for the model with on-board memory. So this is a handy little camcorder, but it’s not perfect.