What is the Canon EOS M5?

Canon launched the EOS M5 just a few days before 2016’s Photokina, the massive bi-annual photography show in Cologne, Germany. It was a clear sign that the company was starting to take its mirrorless proposition a little more seriously.

The new flagship model features the same sensor as the EOS 80D DSLR – a 24.2-megapixel number. Other interesting features include Dual Pixel CMOS autofocus, a Digic 7 processor, an ISO range of up to 25,600, an electronic eye viewfinder, 7fps shooting and Full HD video recording. 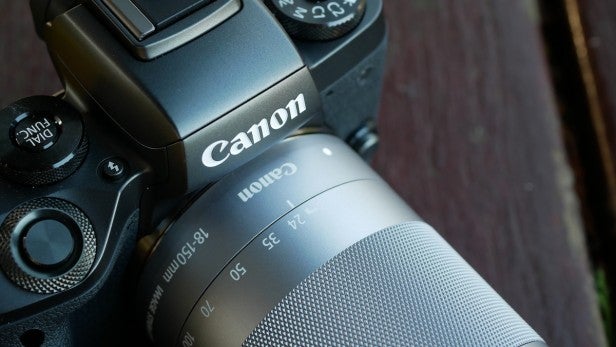 EOS M cameras have always felt a little also-ran, but it feels like Canon has put particular thought into how enthusiasts and fans of the brand will want to use the M5.

It has an attractive body shape that’s very Canon-like. It has its own style without trying to copy the retro designs of other mirrorless cameras on the market, and very much looks like a miniaturised version of one of Canon’s DSLRs – the end result is quite cute, really.

The camera sits very nicely in the hand, with a satisfyingly chunky grip at the front which is moulded to fit the shape of your fingers well. The shutter release is positioned well for your forefinger to rest comfortably on top of it. 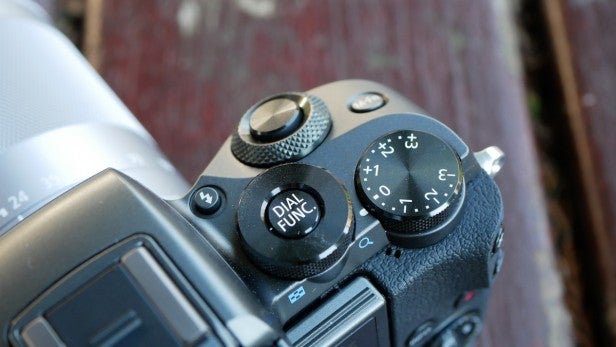 Another dial is handily placed for your thumb for altering exposure compensation. It’s got a good level of rigidity so you wan’t accidentally knock it and create wildly over or underexposed images.

Flip to the back of the camera and the majority of the buttons can be found on the right hand side – this is great when you want to use the camera one-handed, as you won’t have to contort your hand into a weird shape to press the buttons. 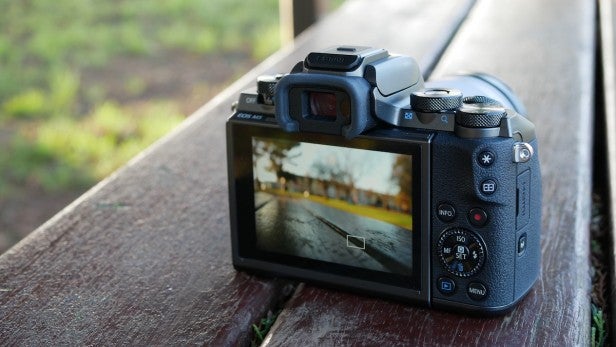 The screen is touch-sensitive, which means you can use it to set the autofocus point, or move around various menu and playback options. For this model Canon has added touch-and-drag AF. This means that you can use the viewfinder while still being able to use the screen to set the autofocus point. This is a feature we first saw in Panasonic cameras and has proven to be very handy.

Canon has gone one step further, however, adding the ability to only use a specific area of the screen for touch-and-drag to prevent your nose from touching the screen and accidentally setting the AF point. In practice that’s a great idea and makes it a much more usable solution. 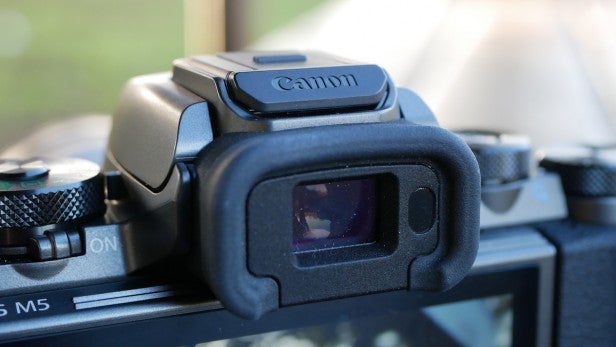 Speaking of the viewfinder, this is the first time that Canon has included one on an EOS M model – for which enthusiast users will probably be thankful. It offers a bright, clear view of the scene in front of you, but it’s perhaps a touch on the small side – about the same size as the finder on the Fujifilm X-T10, rather than the X-T2. Nevertheless it’s still very usable and something which you won’t only want to use when the screen isn’t a practical choice.

A small criticism of the viewfinder is that it appears to oversaturate colours. It’s not a huge problem; it’s just something you need to be aware of when you’re looking at the final image. 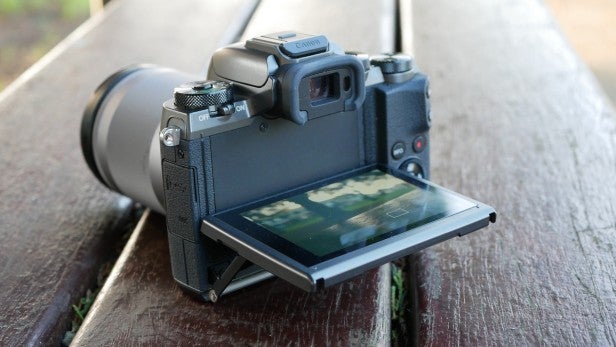 As there’s a viewfinder in the way, the screen now tilts to face the front at its bottom hinge – so those all-important selfies are still possible. On the downside, this means that if you want to use the camera on a tripod or a solid surface, you won’t be able to tilt the screen to face you. The screen also tilts upwards so your low-angle shots are made easier, too.