The Canon EOS M100 is the direct replacement for the two-year-old Canon EOS M10. It sits below the company’s EOS M6, EOS M5 and EOS M3 models as a beginner-friendly option for those looking to buy their first interchangeable lens camera and pursue photography beyond the limitations of a basic compact camera or smartphone.

The Canon EOS M100, like its predecessor, accepts Canon EF-M lenses – as well as EF and EF-S lenses via an adaptor – and is available in black, silver or grey, with a choice of nine jacket colours to customise it to your taste.

To bring the EOS M100 up to date, Canon has replaced the 18MP sensor of old with a new 24.2MP APS-C CMOS chip. This sensor is similar to those found in Canon’s latest APS-C DSLRs and teaming it with a faster and more powerful DIGIC 7 image processor brings a number of improvements to the camera. 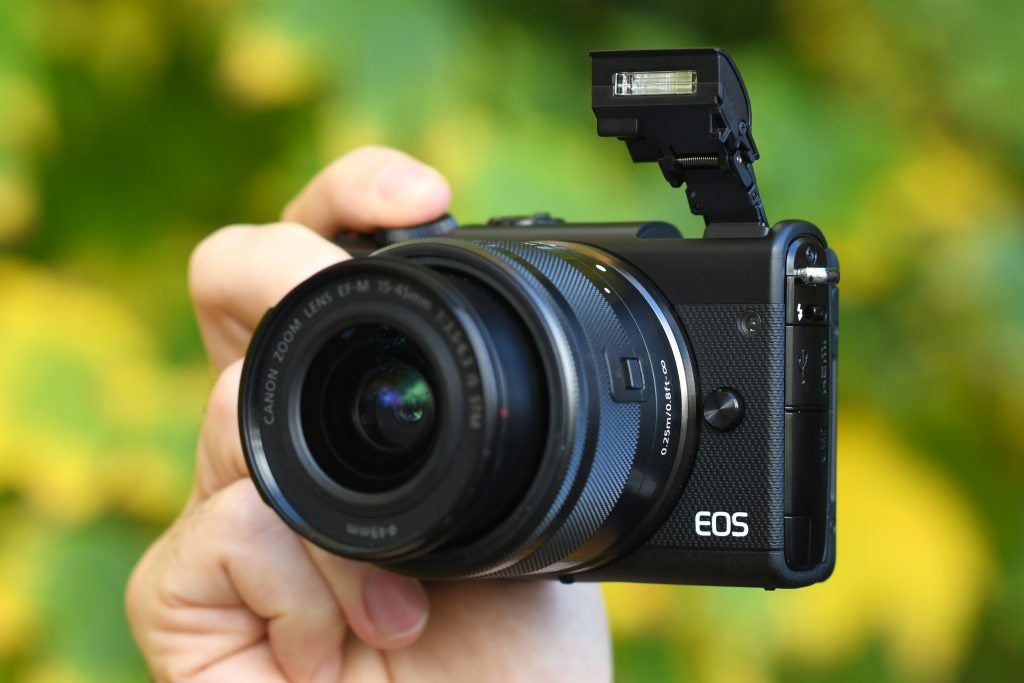 The camera is the latest model to inherit Canon’s excellent Dual Pixel CMOS AF system, which we’ve seen filter down from more advanced models ever since it made its debut in the EOS 70D in 2013. It’s known for delivering fast and highly accurate focusing in Live View and is essential on a camera of the EOS M100’s pedigree that neither has nor supports a viewfinder.

Unlike the EOS M6 or EOS M3, which allow a removable electronic viewfinder to be fitted to the top via the hot shoe, users have no option but to use the 3in, 1,040k-dot tilting touchscreen to frame up shots and operate many of the camera’s settings.

Tilting the screen by 180 degrees causes the camera to automatically enter self-portrait mode, for high-quality selfies that can then be shared with mobile devices using the EOS M100’s Wi-Fi, NFC or Bluetooth connectivity options. Download the Canon Connect app – free for iOS and Android devices – and it’s also possible to also take remote wireless control of the camera and its settings.

Touchscreen aside, the camera inherits the same 49-point AF system from the EOS M10. There’s the option to freely move the focus point in 1-point AF, smooth zone AF, as well as Face+Tracking mode. Users also get one-shot AF and Servo AF operations to choose from. A bright orange AF-assist beam can be employed to help acquire focus on close subjects in low light, and there are focus peaking and magnify options (5x or 10x) available for precise manual focusing. 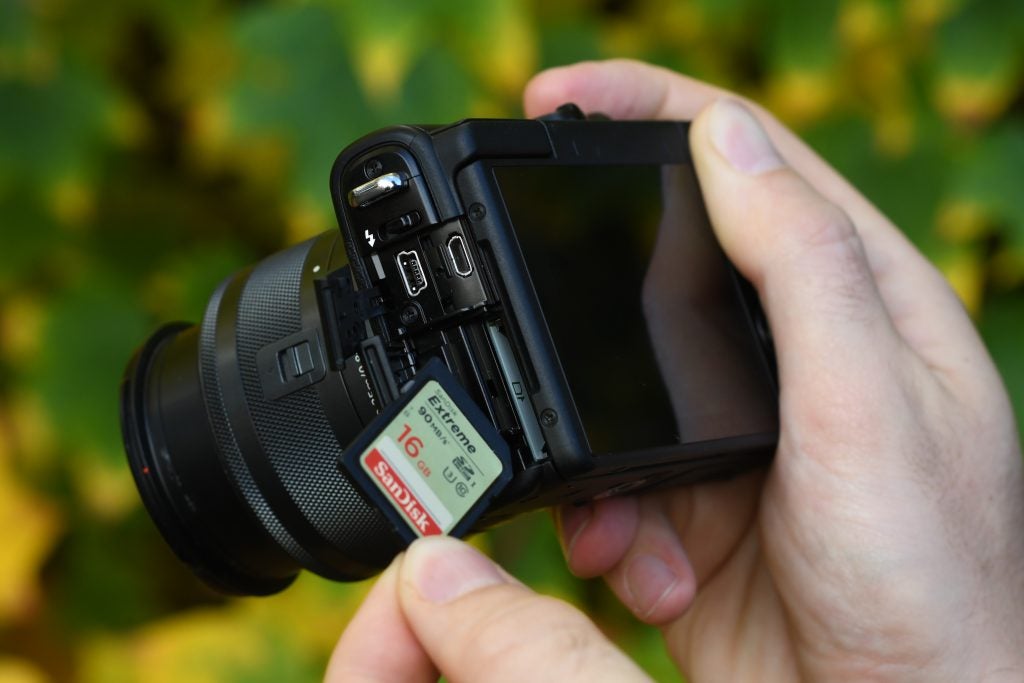 The camera doesn’t feature 4K recording, so movie capture is limited to Full HD (1920×1080) at 50,50,30,25 and 24fps, for a maximum duration of 29mins 59secs. There’s no 3.5mm stereo jack to plug in an external microphone either, so those who like to frequently shoot videos or want to improve the audio of their video recordings would be better served by the EOS M5 or EOS M6.

In most other respects, the EOS M100 is very similar to the EOS M10. It provides hints and tips to help beginners navigate the camera, but it’s rather surprising that it doesn’t adopt Canon’s guided user interface, which can be used to learn how camera settings work as you shoot, then switched off when required. 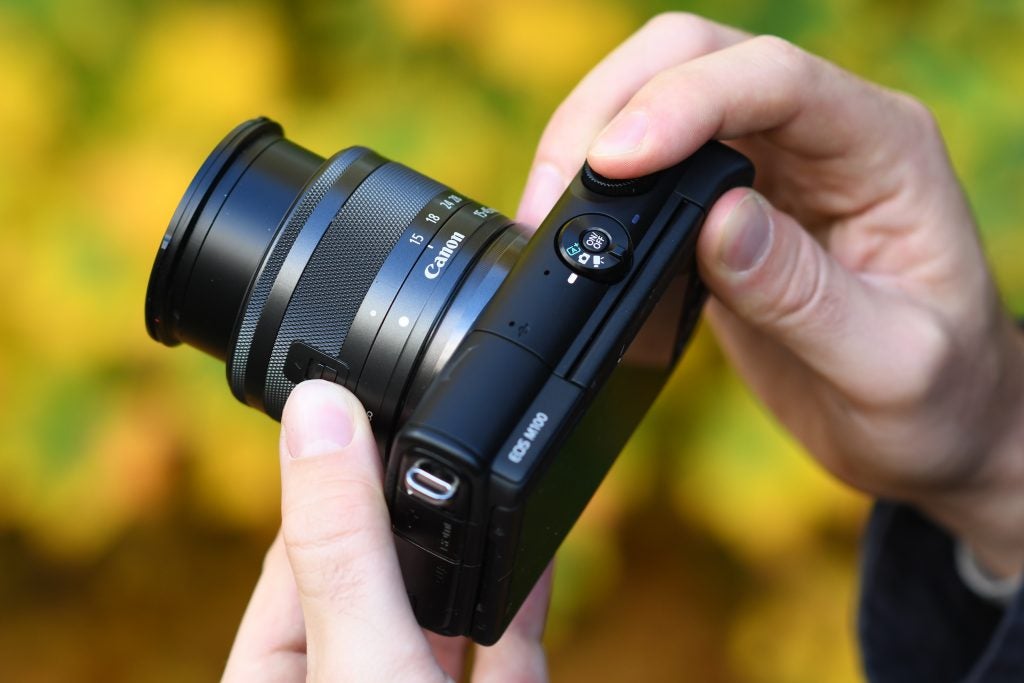 I was never a huge fan of the way the EOS M10 felt in the hand. It offered very little grip and felt like it could slip from your grasp at any moment. I’m glad to report that things have improved a little in the handling department, with a textured pattern to the thumb rest and the front of the camera.

Though it does feels less likely to slip from your hands, the grip could still benefit from being rubberised and better sculpted to provide more to wrap your fingers around. It’s at this point I should mention that Canon does produce face jackets for the camera, which give it slightly better purchase and grip, but you’ll pay an extra £50 for the privilege, which seems excessive. 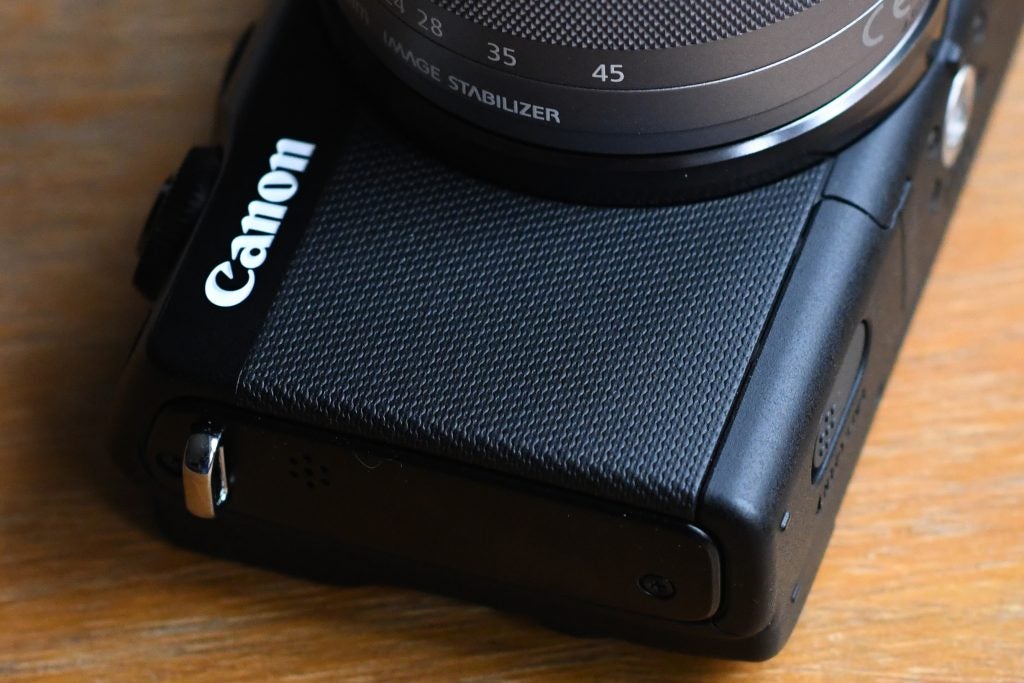 Controls are about as basic as they get on a mirrorless camera. It’s turned on from the top plate using an on/off button, which is located within a switch that offers access to the camera’s automatic, stills and video modes. The top plate now has a more rounded profile and the command dial that encircles the shutter button is now slanted, which improves comfort when adjusting it with your index finger.

The small pop-up flash requires a flick of a switch at the side before it springs up, while the button layout at the rear is virtually identical to the EOS M10. The only exception is the new wireless button, which can be used to initiate a connection, even when the camera is switched off. Hold down the wireless button for two seconds and you’ll be presented with direct access to the camera’s wireless options on the screen. 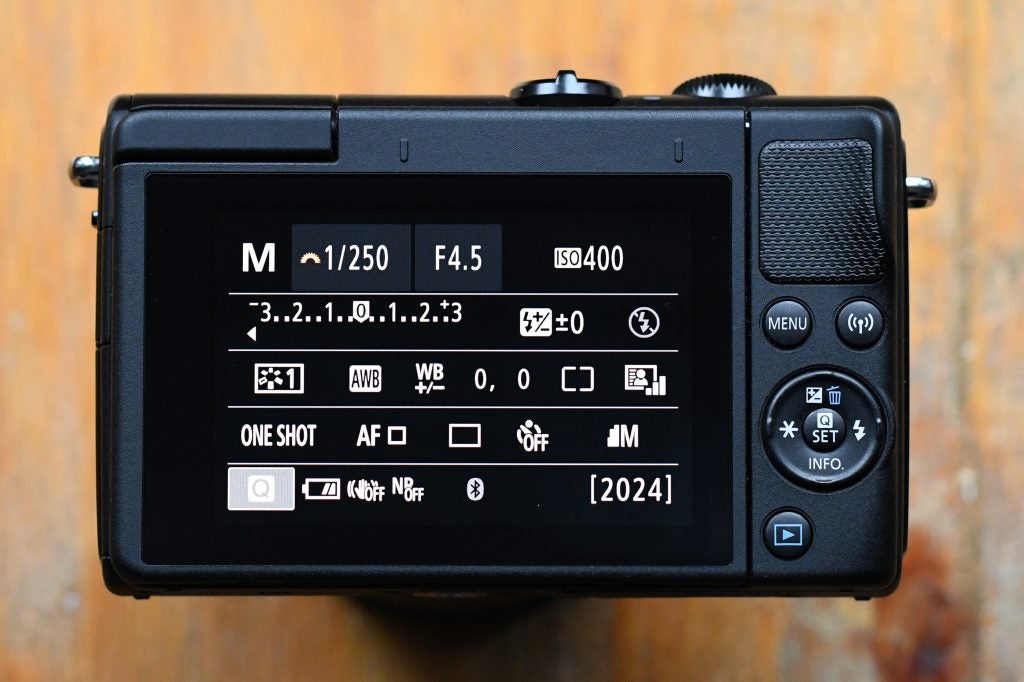 Unusually for a mirrorless camera, SD cards are loaded on the left side of the body rather than the right. A small recess on the side of the screen allows the SD card door to be opened independently of the USB/HDMI port opening. As for the screen’s operation, it flips upward very smoothly and provides a reassuring click when it’s folded flush with the back of the camera.

As a camera that relies heavily on its screen for composition and setup purposes, it’s vital that this aspect of the M100 performs well.

The sharpness, colour and sensitivity of the touch screen is excellent. It’s on par with the screens you get on Canon’s enthusiast DSLRs, albeit without the option of tilting it down to assist overhead shooting. Hitting the Q.Set button is the fastest way of accessing non-exposure-related settings – such as drive mode, image quality, white balance and aspect ratio – without having to trawl through the menu. To toggle back and fourth between shutter speed and aperture in manual mode, you simply hit the exposure compensation button. 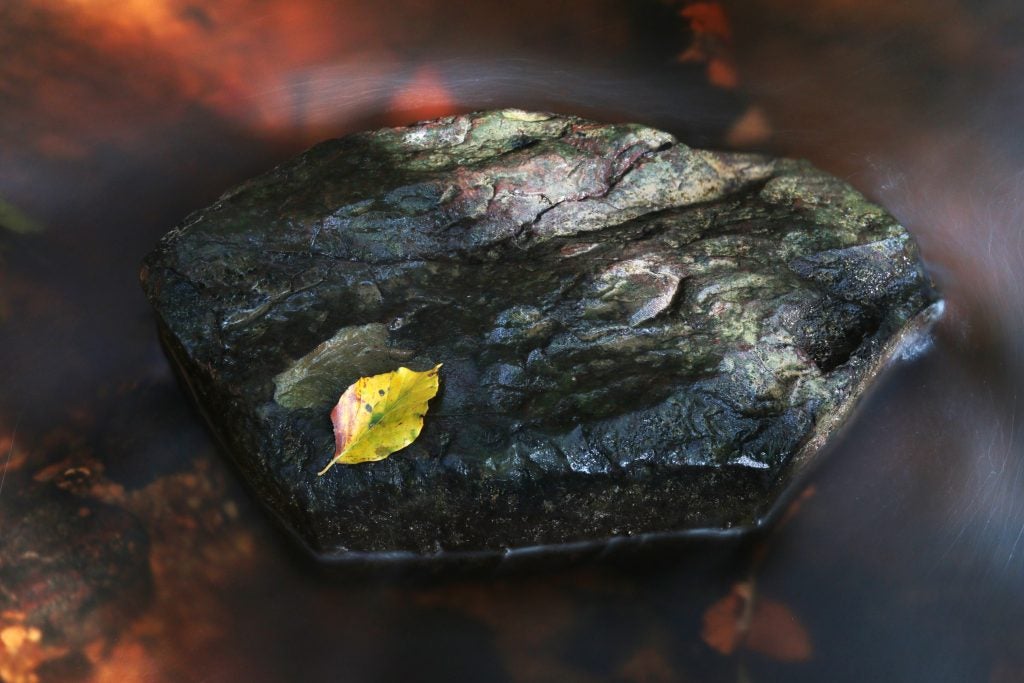 For no-fuss operation, or for those just starting out in photography, the auto mode – also known as green square mode – is capable of producing good-quality snapshots with a minimal amount of effort. You get options for controlling image quality, movie rec size, drive mode, self timer and aspect ratio in auto mode, but one thing you don’t have a say on is the maximum ISO value. To set this, you’ll need to enter the PASM modes, where access to Auto ISO with a maximum limit is provided. 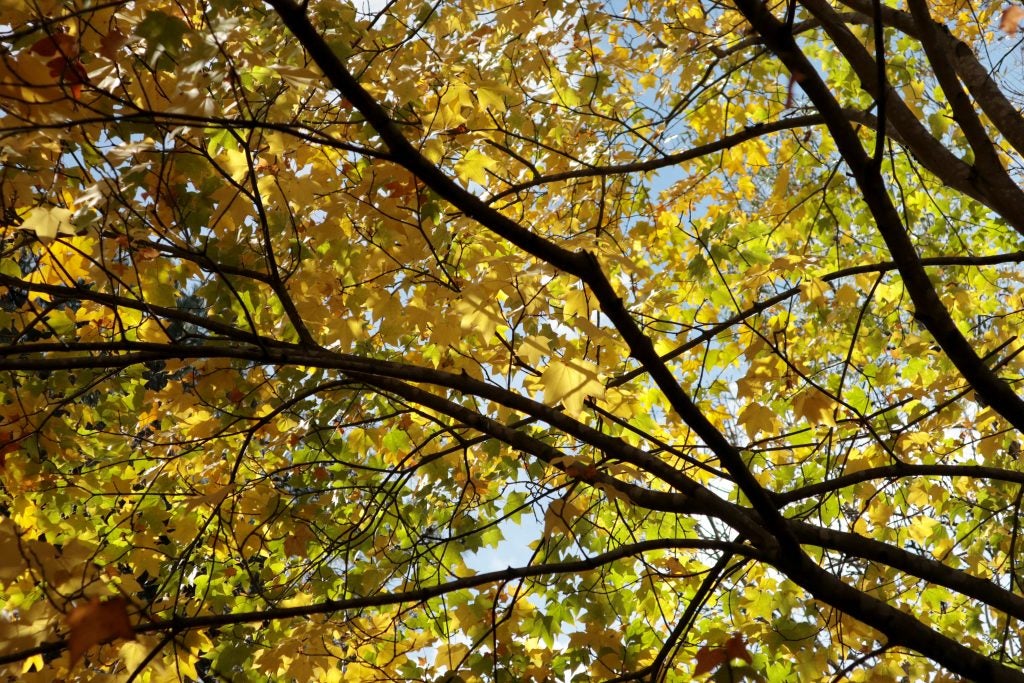 Some users may wish to experiment with the touch shutter function, which performs autofocus before firing the shutter as soon as your finger comes into contact with the screen. Personally, I find this a bit of a gimmick and much prefer operating the camera conventionally, as I’m sure the majority of users will. 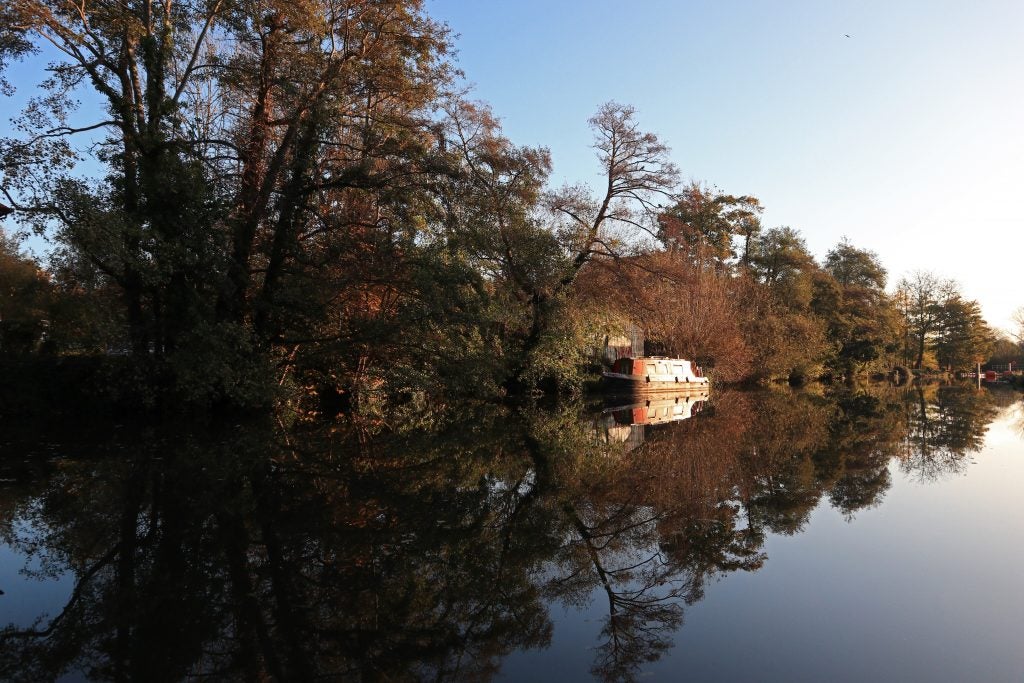 Focusing speeds are hasty in bright lighting conditions, but I did notice that it takes fractionally longer to acquire accurate focus in dark locations, where the AF assist beam can be ineffective. The introduction of Dual Pixel CMOS AF and the option of turning Servo AF on from the corner of the screen has hugely improved focusing during movie recording. Also, there isn’t a peep of sound picked up by the camera’s in-built microphone when you’re filming with the EF-M 15-45mm f/3.5-6.3 IS STM kit lens. This means clean audio recordings, without pesky autofocus whirring in the background. 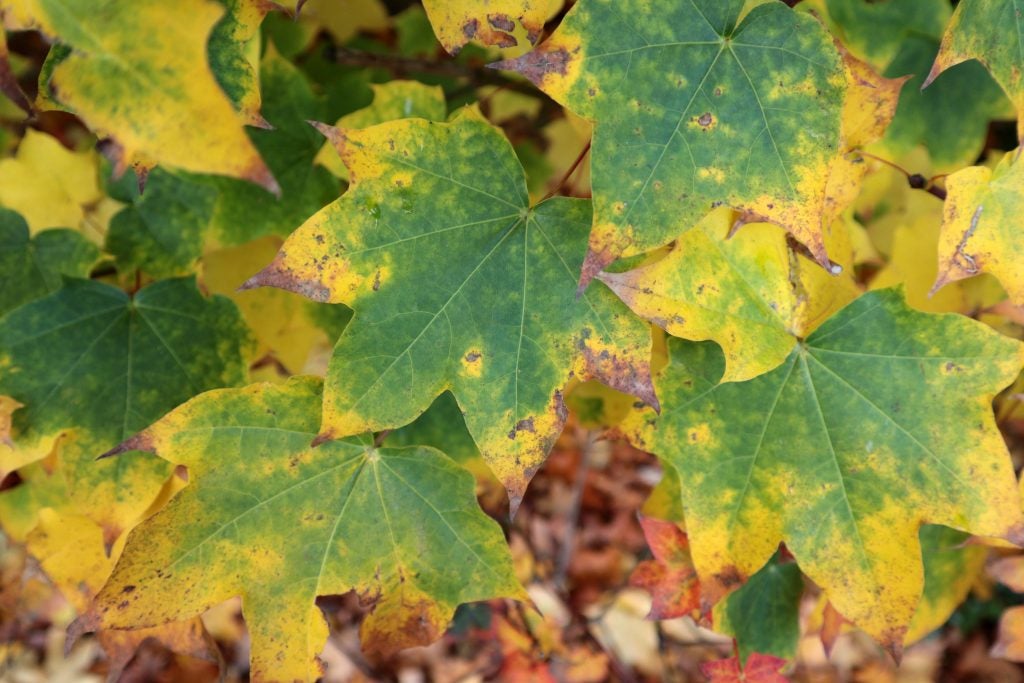 With its basic design and simple layout, the EOS M100 won’t scare off newcomers to interchangeable lens cameras. It’s a camera that can be picked up and used with barely any thought, but it does lack in guidance on how to progress from its point-and-shoot modes to taking manual control of the camera. As mentioned earlier, not adding the guided user interface from Canon’s EOS 800D and Canon EOS 77D models does seem like an oversight, given the audience the camera is designed for.

Canon EOS M100, RAW, ISO 100. Multiply the number below the line by 200 for the resolution in lines/picture height

Canon EOS M100, RAW, ISO 6400. Multiply the number below the line by 200 for the resolution in lines/picture height

Canon EOS M100, RAW, ISO 25,600. Multiply the number below the line by 200 for the resolution in lines/picture height

In-camera JPEG processing does an acceptable job up to about ISO 1600, after which noise reduction smoothing leads to a loss of detail, which can be retained by shooting in RAW. Shooting at ISO 3200 and ISO 6400 isn’t out of the question in low light, but users won’t want to push beyond ISO 6400 very often, as muted colour and increased noise becomes much more prevalent at ISO 12,800 and ISO 25,600. 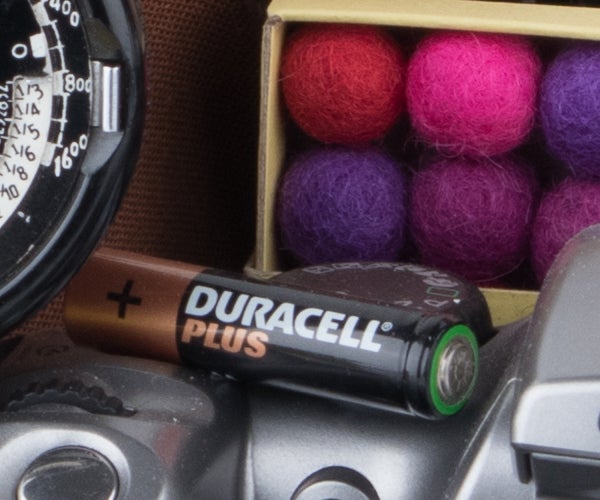 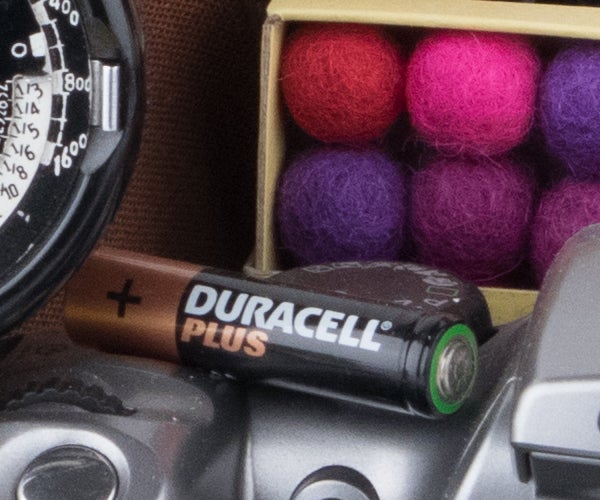 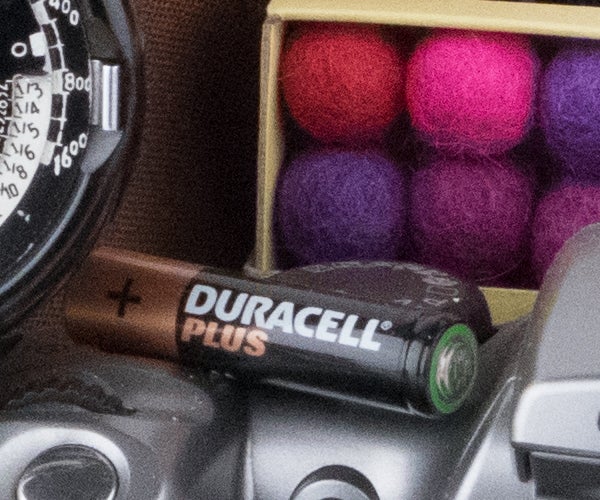 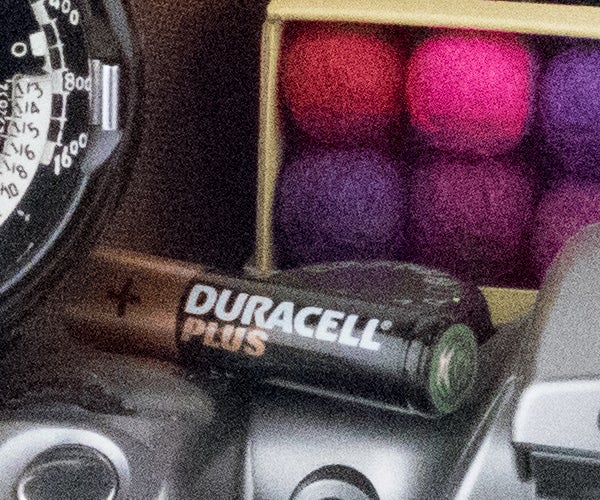 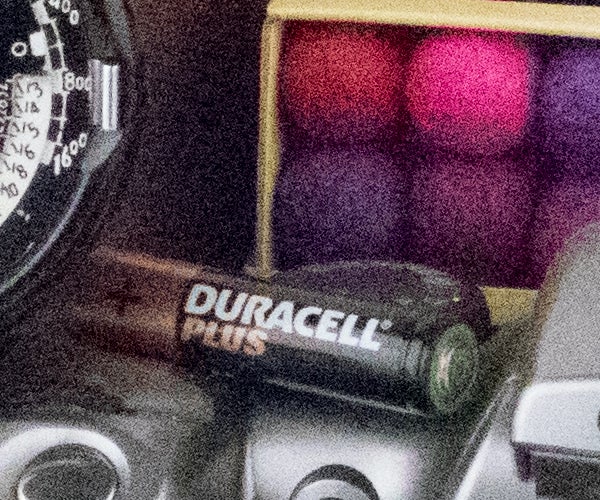 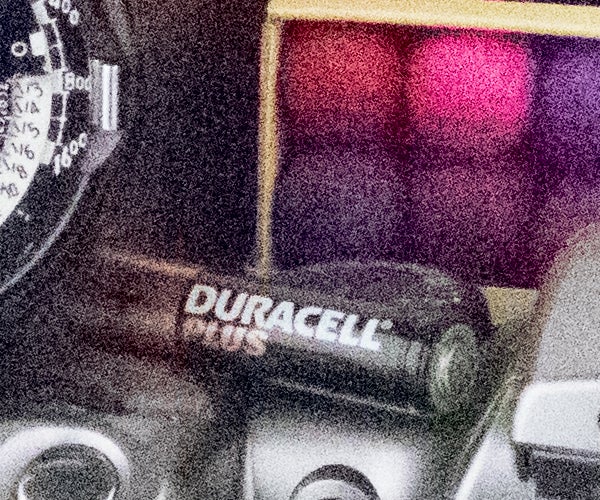 My lasting impression of the EOS M100 is that it’s a camera that is hard to get excited about. Although it’s more than capable of producing satisfying results, the user experience is very much geared towards novices who insist on no-fuss operation and don’t mind driving the camera through the touchscreen the majority of the time.

If you’d like to take up photography and know you’re likely to pursue it in the long run, you’re likely to outgrow the Canon EOS M100 very quickly and wish you’d chosen an alternative with better handling, finer manual control, and support for an electronic viewfinder. The Canon EOS M3 and EOS M6 tick these boxes, but the fact Canon only has seven lenses in its EF-M range – one of which is a prime – is a limiting factor when it comes to creativity.

I wouldn’t go as far as saying the EOS M100 is a bad choice for beginners – it’s just not the best entry-level mirrorless camera out there right now and is expensive for what it is. Compare it to the cheaper Canon EOS M3 (£359 body only), and there’s a good saving to be had by opting for that older but more likeable offering.

The Canon EOS M100 picks up where the Canon EOS M10 left off, but it’s very basic, rather expensive, and has room for improvement in areas of its handling and manual control. Anyone buying their first interchangeable camera or looking to take their photography seriously should research the alternatives first.