A couple of years ago, Canon added two similar models to its EOS line-up in the form of the EOS 750D and EOS 760D. At the time, we questioned  the manufacturer’s rationale  behind creating two cameras with near-identical specifications.

Two years on, we’re presented with another pair of similar EOS models. The new EOS 800D replaces the EOS 750D and is targeted at newcomers to DSLRs, such as those stepping up from a basic compact or a smartphone. The EOS 77D on test here is the EOS 760D’s successor, and sets out to appeal to aspiring enthusiasts with greater photographic knowledge who are after sophisticated control.

Just like the EOS 80D that’s positioned above it in Canon’s enthusiast line-up, the EOS 77D is equipped with a 24.2MP APS-C CMOS sensor. Although this sensor doesn’t offer a higher pixel count like the EOS 760D did over the older EOS 700D, it does support Canon’s Dual Pixel AF technology that promises considerably faster focus acquisition in live view.

As well as this notable enhancement, the EOS 77D’s sensor pairs up with Canon’s most up-to-date DIGIC 7 image processor that’s claimed to process data 14x faster than the DIGIC 6 processor found within the EOS 750D/760D. This has resulted in the camera offering a higher maximum burst speed and superior buffer depth. Whereas the EOS 760D could shoot at up to 5fps for as many as 940 JPEGs or eight RAW files, the EOS 77D claims to be capable of recording an unlimited number of JPEGs at 6fps or 27 RAW files at the same speed. 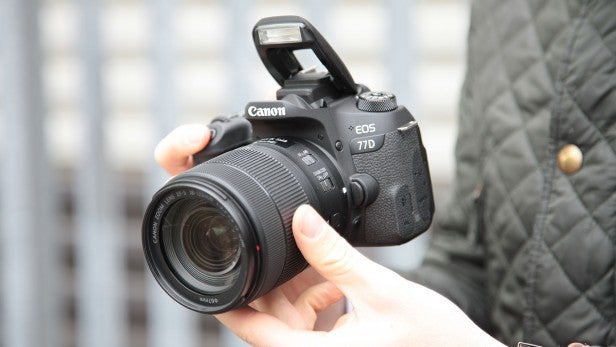 The EOS 77D’s new AF system is a far cry from the 19-point autofocus system that featured on the EOS 760D. The major revamp has seen it inherit the same 45-point all-cross-type AF system from the EOS 80D. Out of the 45 AF points on offer, 27 remain active when using a teleconverter and lens combination with a maximum aperture of f/8, whereas the centre point is sensitive down to f/2.8.

The good news doesn’t end here. The working range of the AF system also spans wider than it did before, and operates across a -3EV to 18EV range. 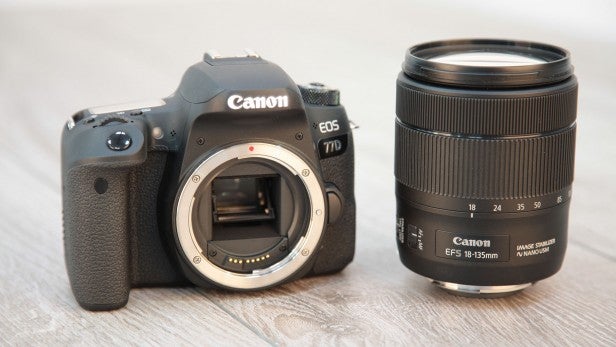 At this point, you might be wondering how the EOS 77D differs from the EOS 80D. Viewing the EOS 77D from above reveals that its top-plate LCD is smaller and more cramped.

Turning to the rear, the pentamirror viewfinder, with its 95% coverage of the frame and 0.82x magnification, doesn’t quite trump the 100% frame coverage and 0.9x magnification of the EOS 80D’s pentaprism. Neither does its battery offer the same stamina.

There are other differences,  too, with the 80D shooting a continuous burst 1fps faster and presenting a higher maximum shutter speed (1/8000sec as opposed to the EOS 77D’s 1/4000sec).

Below the EOS 77D’s viewfinder you get a 3in, 1.04-million-dot, vari-angle touchscreen, with metering left in the capable hands of Canon’s 7,560-pixel RGB IR metering sensor – yet another feature it inherits from the EOS 80D. 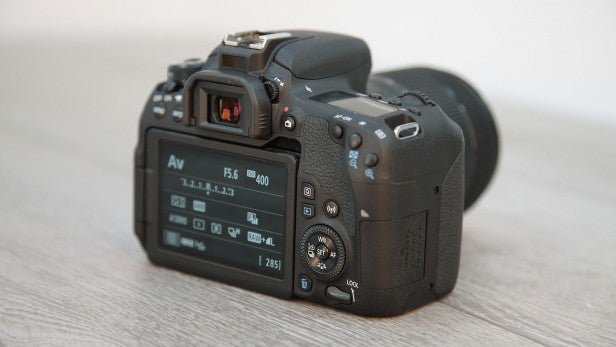 Even more impressive is the EOS 77D’s introduction of in-camera electronic image stabilisation. This is applicable only to movie recording and cannot be used for still-image capture, but it can be activated to ensure smoother video capture when shooting handheld.

Just like the EOS 800D, the EOS 77D sports a 3.5mm microphone port in addition to the twin stereo microphones either side of the pop-up flash. However, you’ll want to look at the EOS 80D if a headphone socket to monitor  audio is a priority.

To satisfy those who would like to control the camera wirelessly and share images via a mobile device, the EOS 77D is Wi-Fi and NFC equipped. The camera’s wireless connectivity teams up with Canon’s Camera Connect app that’s free to download via the App Store for iOS devices or Google Play for Android.

In addition, the camera offers constant Bluetooth wireless control, which ties in with a new BR-E1 remote controller (£39) that can fire the shutter with no line of sight from 5m away.

Whereas the EOS 800D falls into Canon’s DSLRs for beginners range, the EOS 77D positions itself in the manufacturer’s DSLRs for enthusiasts line-up. 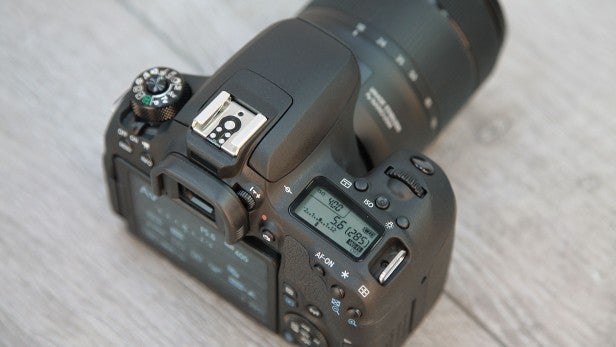 The overall build quality feels more or less in keeping with the EOS 80D, and the aluminium-alloy chassis and polycarbonate resin with glass-fibre finish combine well to give it reassuringly strong  feel in the hand. All the body panels are made to a high standard and there are no creaking noises when the body is held tightly in your right hand, as you occasionally get on some cheaper entry-level DSLRs.

Although the EOS 77D is well constructed, it’s important to note that it’s similar to the EOS 800D in that it doesn’t offer weather sealing. If you know that you regularly shoot in inclement weather or want the extra peace of mind that comes with owning a camera with weather seals, the EOS 80D would be the more suitable mid-range option.

Unlike the EOS 800D, which has a simplified layout of controls to enhance its appeal with first-time and novice DSLR users, the EOS 77D has a somewhat busier look to its body, with a greater number of buttons and dials.

One of the key differences is the rotating thumb wheel at the rear, which takes the place of the EOS 800D’s four-way directional pad. This provides fast, independent control of aperture in manual mode – something that’s not as easy on the EOS 800D, which requires you to hold the AV/exposure-compensation button at the same time as using the single command dial on the top-plate. 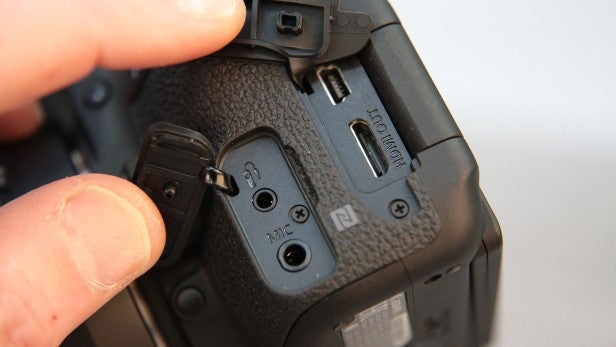 In addition, the rear thumb wheel on the EOS 77D doubles up as a quick way of adjusting exposure compensation in program, aperture-priority and shutter-priority modes. The only drawback from an operational perspective is that it’s like the dial you get on the EOS 760D – it’s rather small and doesn’t offer the same resistance as the rear dials on more expensive enthusiast DSLRs such as the EOS 7D Mark II.

Although the EOS 77D’s handgrip isn’t the largest, it happily accommodates average-sized hands and lets you grip the body without feeling as if your little finger is about to drop off the end. The rubberised grip doesn’t wrap all the way around the side of the body so your palm does come into contact with plastic, and at the rear you get a comfortable thumb rest, which, as on the front of the grip, is rubberised.

The AF-ON button, like the top-plate LCD panel, will appeal to more experienced users, and it can be used to separate autofocus activation from the shutter release, and perform back-button focusing, which isn’t possible on the EOS 800D.

Canon has again carved out a small section of the body below the mode dial to accommodate the camera’s on/off switch. Centralising the switch turns the camera on, whereas flicking it all the way to the right engages video mode. This is different to the EOS 800D, which lets you to turn the camera on, control the shooting modes and drive it from your right hand, with the exception of the main menu and info buttons. 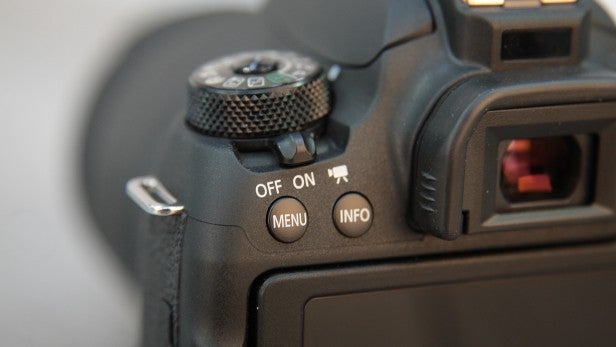 Those familiar with the EOS 760D will notice that the EOS 77D inherits the eye sensor above the viewfinder. Its purpose is to turn off the info screen or electronic-level function when the camera is raised to the eye, to preserve battery life. You may also notice the presence of a lock switch, which isn’t on the EOS 800D, that prevents the EOS 77D’s rear scroll dial being accidentally adjusted.

The rear screens on Canon’s latest DSLRs are well known for being excellent and the EOS 77D’s is no exception. There’s an indent just below the live view button that allows it to be pulled out from the body by 180°. From this position it offers 270° of rotation to aid low and high-angle shooting. It’s super-responsive to light touches and lets you navigate the main menu, quick menu and plethora of on-screen live view settings with no difficulty or fuss.