Another significant advantage this camera has over many other full-frame DSLRs is its 3in, 1040k-dot vari-angle touchscreen, which replaces the 3in, 1040k-dot fixed screen of old.

A vari-angle screen on a Canon full-frame DSLR has been a long time coming, and having the option of pulling the screen out and tilting it to your preferred angle gives it a distinct advantage over a fixed screen when attempting to shoot from tricky angles or unusual perspectives. I can imagine many 5D-series users will feel envious of this screen, but as Canon has outlined before, a compromise would have to be made in the form of weather resistance if this feature were to be introduced to a new 5D-series camera. 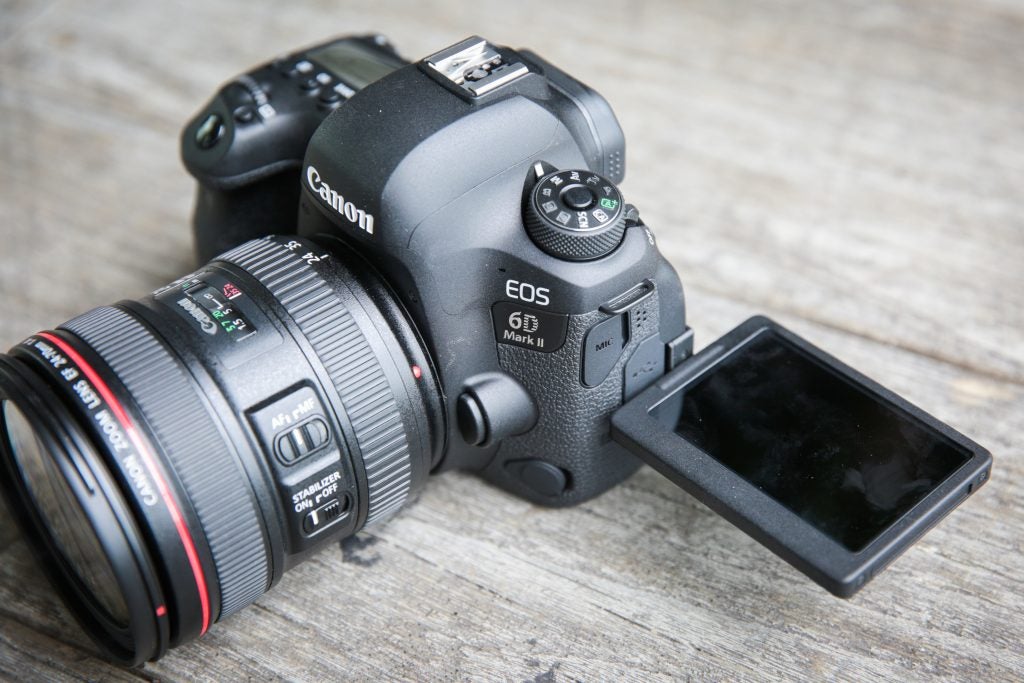 In typical fashion, the touchscreen is super-responsive and reacts to the lightest of touches when used to navigate the menus or zoom and swipe through images in playback mode. There is the option to increase the sensitivity from the menu, but there’s very little gain to be had from doing so. If controlling a camera via the screen isn’t for you, it can be disabled altogether from the touch control settings.

Above the screen you get an optical viewfinder that provides 98% coverage and 0.71x magnification. As well as revealing all the usual exposure and autofocus information, it can be set up to display the drive mode, battery level, alert symbol, flicker detection and image quality. There’s a nice large rubber eye cup to cushion the viewfinder against your eye and diopter control just off to the corner to adjust it to your eyesight.

The number of active autofocus points has increased by 34 compared to the original. This is quite a jump, but it’s important to stress that the grouping of these AF points are closely positioned and are pretty central in the frame.

With the viewfinder raised to my eye, it didn’t take long to realise that the AF points don’t cover as wide an area of the frame as the 61 points you get on the EOS 5D Mark III or Mark IV. The central group of 15 AF points are arranged in a 3 x 5 grid, with the top and bottom line sitting a fraction higher than the two groups of 15 AF points either side. 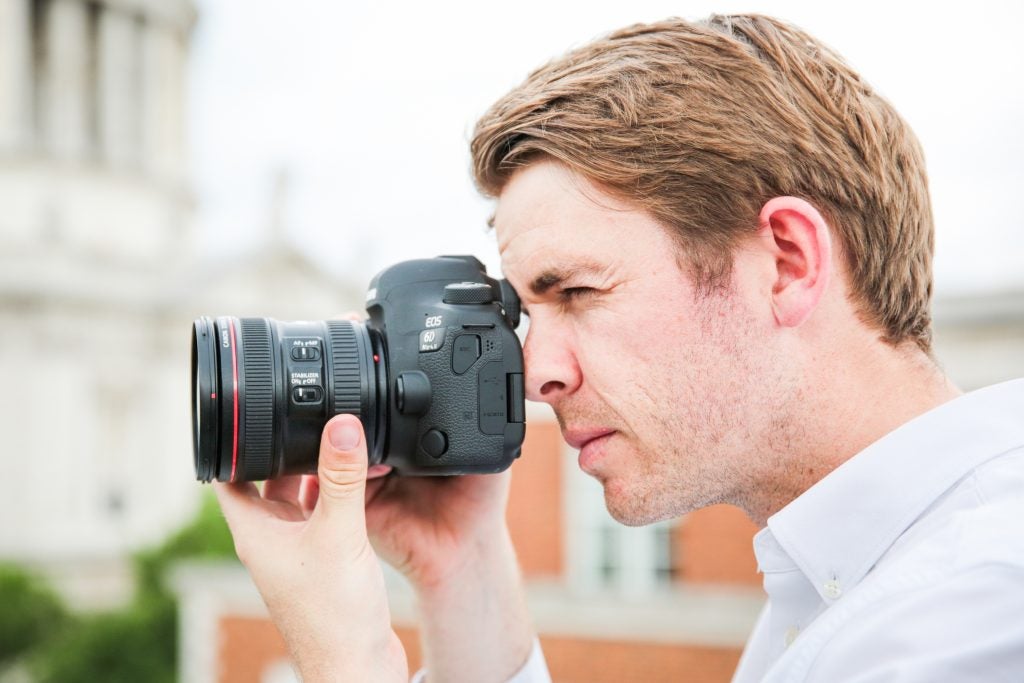 To reposition the AF point, by default you have to press the AF point selection button on the corner of the body before using the four-way controller. However there’s the option to head into the custom controls directly from the quick menu and assign the multi-controller to direct AF point selection, which allows you to reposition the AF point across the frame slightly faster. Hit the AF point selection button followed by the the central Set button and the camera will shift the AF point back to the centre point in an instant. The accuracy and acquisition speed of the autofocus seems hasty in isolation, but a side-by-side comparison with the EOS 5D Mark IV in a low-light scene with both cameras set to AI Servo highlighted it’s marginally slower than its sibling.

Switch to Live View and you’ll see a vast improvement over the original, thanks to the integration of Dual Pixel AF. There’s no more waiting around for the camera to lock onto a subject; no sooner have you half-depressed the shutter button, the AF beeps to acknowledge correct focus has been achieved. In practice, this has completely transformed the experience of shooting in Live View. 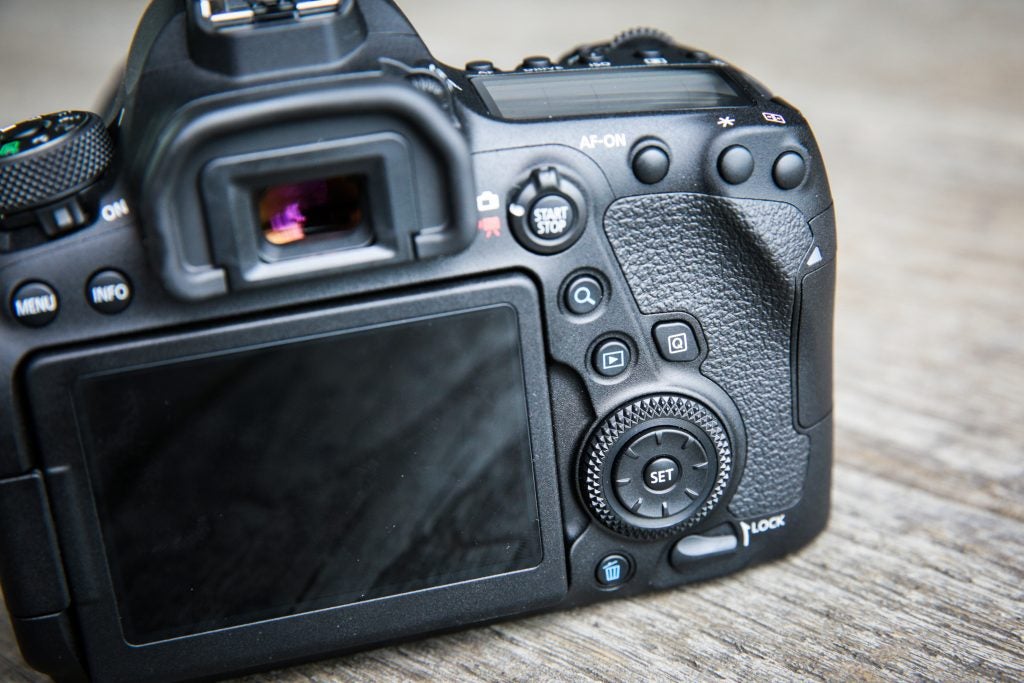 The way you’re given options over selecting continuous autofocus (AI Servo) and three AF methods means the camera can be used in Live View to successfully obtain sharp results of moderately fast-moving subjects too. Where it has greater difficulty is when it’s asked to focus on a subject travelling directly towards the camera at very high speed. Some users may also wish to take advantage of relocating the AF point or AF area using the touchscreen, which works well when it’s combined with the touch shutter function.

It might come as a shock that the camera doesn’t support 4K-movie recording, like  the EOS 5D Mark IV. In its absence you get Full HD (1920 x 1080) video at up to 60p and you’re provided with a 3.5mm port to plug in an external microphone.

The camera also lacks a headphone port to monitor audio levels, but there are some particularly useful functions in the Canon Connect app that let you review audio levels in video mode, adjust the audio sensitivity, and control the wind filter and attenuator. We’re yet to see the app offer the option to control the camera’s 4K time-lapse mode, but who knows, we may see this added in the future. 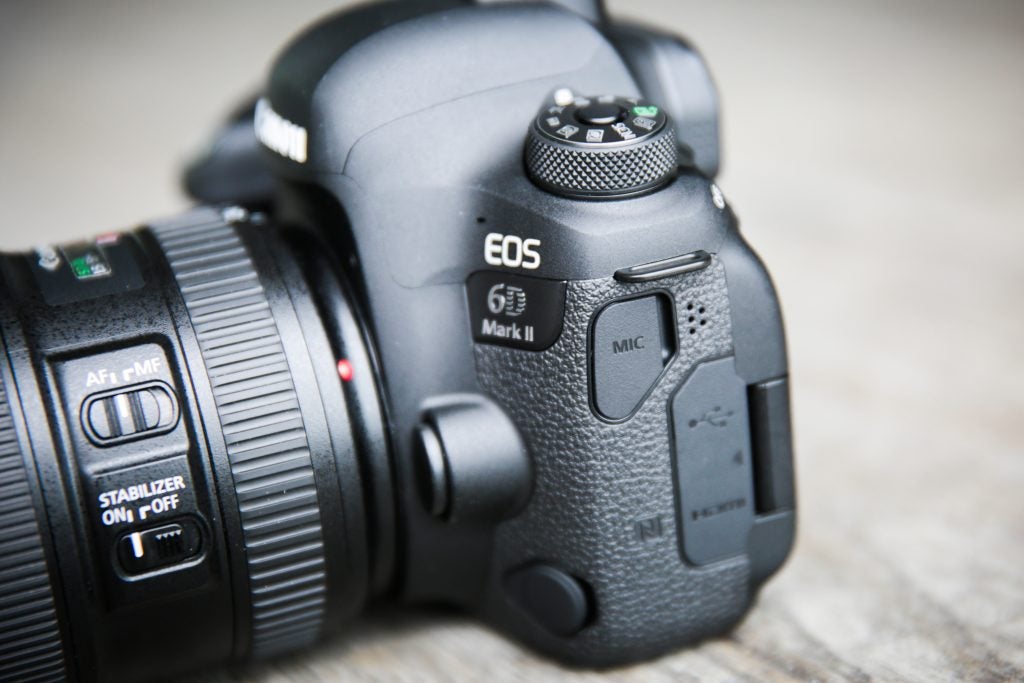 Users can attach an external microphone via the mic port, but there’s no headphone port

The EOS 6D Mark II also becomes the first full-frame EOS to include 5-axis in-camera digital stabilisation for movie capture. The good news is that video footage can be stabilised even when non-IS lenses are used, and the electronic stabilisation can be combined with optical stabilisation with compatible EF lenses. It does a reasonable job compensating for jolty movements and can be used in combination with a shoulder mount rig or tracking rail to achieve even smoother-looking handheld footage.

It goes without saying that the EOS 6D Mark II won’t be the first choice for professional videographers wanting to shoot the highest-resolution movies. That being said, its 4K time-lapse mode, 5-axis in-camera digital stabilisation and vari-angle screen will be well received by enthusiasts who like to dabble with video from time to time.

The EOS 6D Mark II is the first Canon DSLR to offer a 4K time-lapse movie mode with a built-in intervalometer.

The 4K time-lapse mode is found from the menu settings in Live View, and once you’ve selected the resolution you can set your preferred interval time by hours, minutes and seconds. As well as being able to manually enter the number of shots you’d like to capture, you’re given other options such as keeping the exposure fixed from the first frame, disabling the beep as an image is taken, and controlling the LCD auto-off function.

As I discovered, there’s no better way of learning how this creative movie mode works than by giving it a try. The camera automatically calculates the duration of the time-lapse and playback time based on the interval and number of shots selected, which is helpfully displayed at the bottom of the time-lapse movie menu settings. 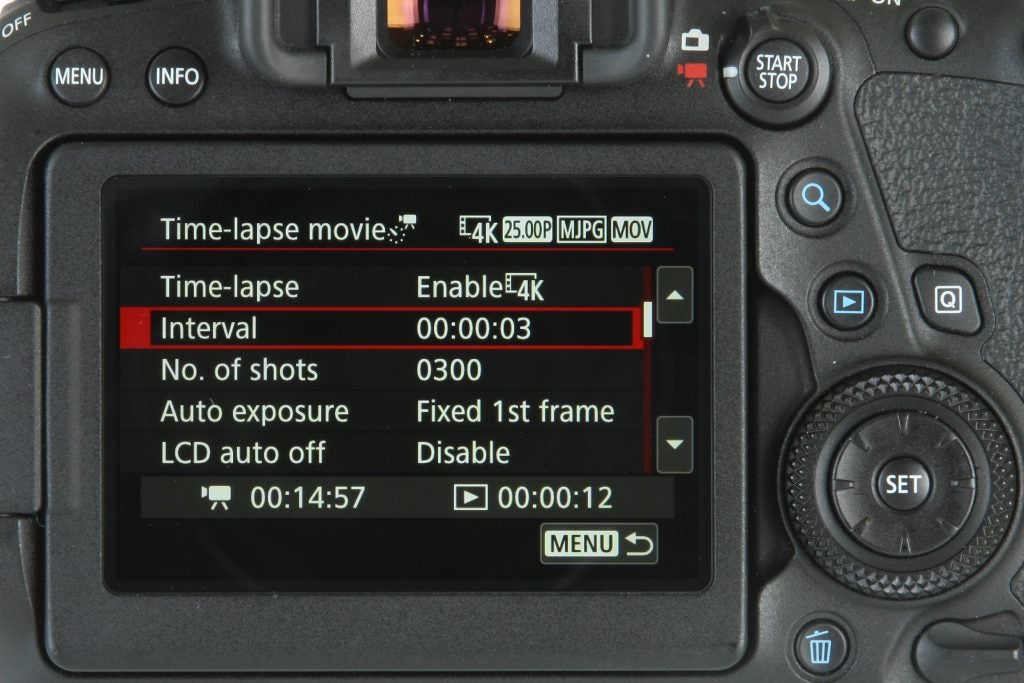 Commencing a 4K time-lapse couldn’t be easier. You’re prompted to set and test your exposure settings first, before hitting the start-stop button and then the shutter button to start the time-lapse. Once the time-lapse has ended, the camera automatically disables the time-lapse movie mode and merges the recorded frames together to create a movie (.mov) file that can then be reviewed in playback.

It’s a powerful feature capable of producing striking results and makes the process of capturing movement of slowly changing scenes much more accessible. I wouldn’t be surprised if this feature is inherited by other EOS models in the near future.