What is the Canon EOS 6D Mark II?

With the recent release of the Canon EOS 6D Mark II, there’s a new, junior full-frame DSLR for enthusiasts to get excited about. It positions itself below the EOS 5D Mark IV and above the EOS 7D Mark II, entering the market with a price of £1999.99 (body only).

When the original EOS 6D arrived on the scene, it quickly became popular with enthusiast photographers who were looking to progress from an APS-C DSLR into full-frame photography, without having to make a huge financial investment and a giant leap up to the EOS 5D Mark III. Needless to say, it’s a camera that’s been well received over the years and fulfilled a missing link in Canon’s EOS series.

With a whopping £1350 to be saved from choosing the EOS 6D Mark II ahead of the EOS 5D Mark IV, it makes the jump to full-frame far more appealing for those who take photography seriously. We’re often used to paying a premium for something new or to upgrade, so it’s refreshing to find that Canon’s latest full-frame model is £200 cheaper than the original EOS 6D at launch in 2012. 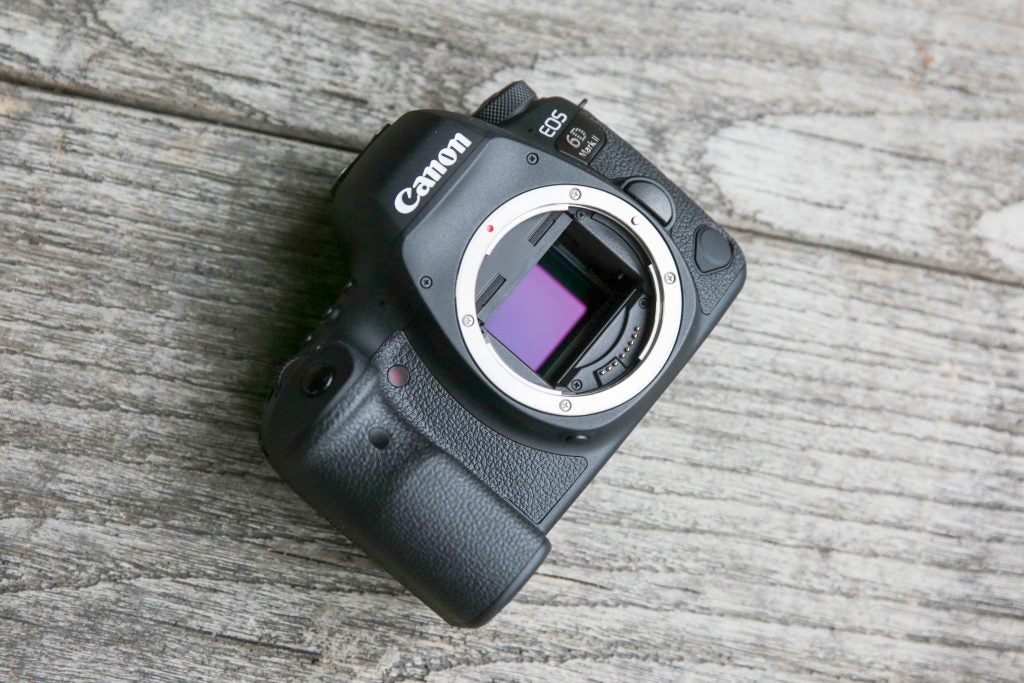 Like other Canon DSLRs of late, the new sensor teams up with Canon’s latest DIGIC 7 image processor. The pairing promises improvements to both image quality and performance speed.

Image information is processed 14x faster than Canon’s DIGIC 6 image processor (the original EOS 6D featured a DIGIC 5+ image processor) and it can now shoot a continuous burst at up of 6.5fps, which is 2fps faster. Canon claims it can sustain a burst of 150 JPEGs, or 21 raw files at 6.5fps.

Speed benefits are also gained in live view thanks to the integration of Canon’s Dual Pixel CMOS AF technology. We’ve seen this technology rolled out across a number of other Canon DSLRs in the past few years, including the EOS 80D, EOS 7D Mark II and EOS 5D Mark IV. As well as providing high-performance Servo AF tracking and smoother focusing, it rules out the sluggish autofocus performance in live view mode that’s associated with older Canon DSLRs lacking this breakthrough technology.

For those unfamiliar with Dual Pixel CMOS AF, it’s a sensor-based, phase-detection autofocus system that works by splitting all the effective pixels on the surface of the sensor into two individual photodiodes – one for left and one for right. Each of these photodiodes can be read separately, allowing faster phase-detection autofocus while simultaneously being used for image capture. It’s a system that’s become beneficial to photographers and videographers who’d like to shoot quickly, without having to put up with clumsy focusing in Live View. 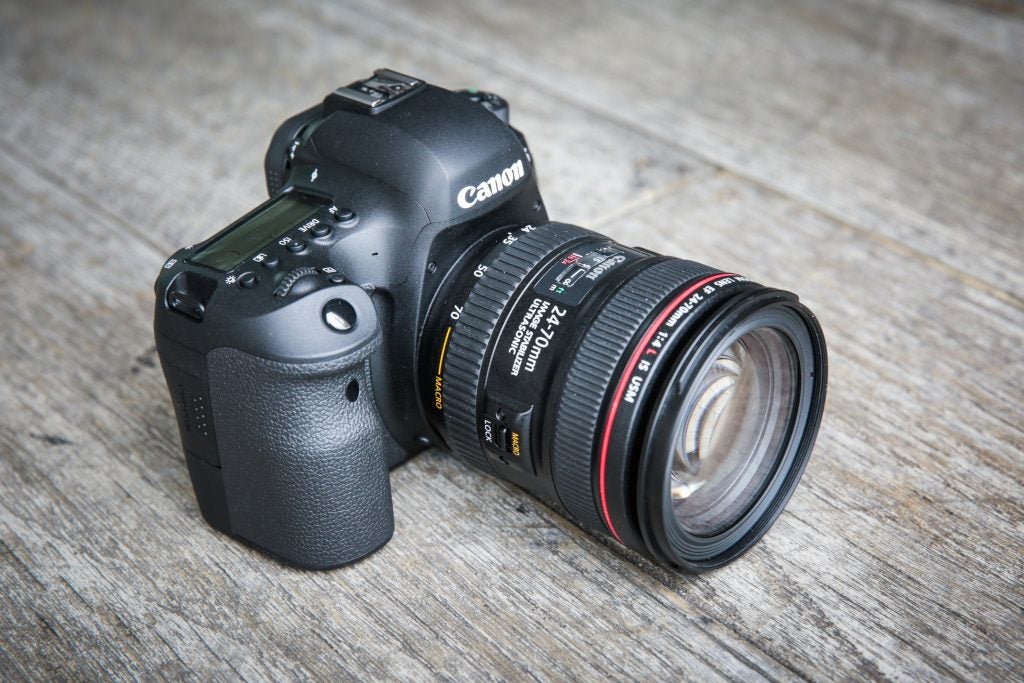 The Canon EOS 6D Mark II has a revised AF system that’s considerably more advanced than the 11-point AF system with one cross-type point on the original EOS 6D. This latest model inherits the 45-point all-cross-type AF system from the EOS 80D. Of the 45 AF points on offer, 27 are f/8 compatible, with the centre point sensitive down to f/2.8. The working range of the AF system is the same as before, however, and is sensitive to -3EV to 18EV.

The camera’s metering is left in the capable hands of a 7560-pixel RGB IR metering sensor. We’ve seen this used before in the likes of the EOS 77D and it has proven to be reliable at delivering consistently accurate exposures. To counteract the rapid on/off pulsing seen with some artificial lights, the camera also inherits Canon’s anti-flicker technology that first made its debut in the EOS 7D Mark II.

Wi-Fi and NFC connectivity is built into the camera, offering photographers the freedom to control it wirelessly from a smartphone or tablet that’s running Canon’s Camera Connect app. There’s also Bluetooth connectivity to form a permanent connection to a smartphone – a feature previously seen on the EOS M5, EOS 800D and EOS 77D. It allows your phone to be used as a remote control at any time, without having to mess around setting up a Wi-Fi connection between devices. 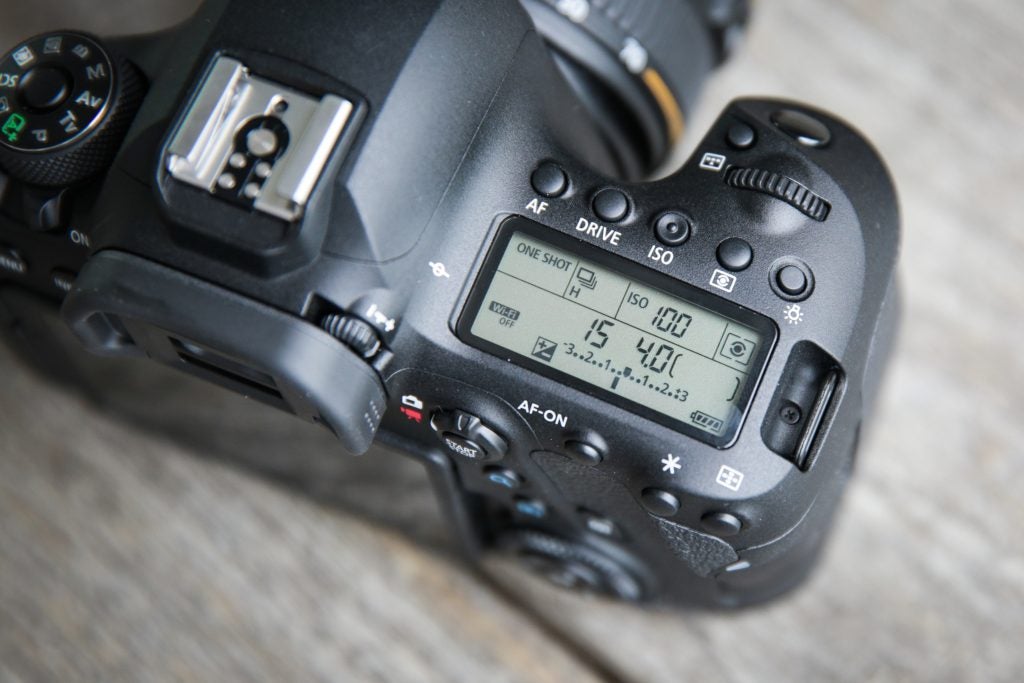 The Bluetooth connection can also instruct the camera to fire up its Wi-Fi for when you want to copy images across to your phone, or use full remote control with Live View. One further feature of note is the 6D’s built-in GPS functionality, which can be used to geotag images with GPS coordinates and can help retrace your steps when it comes to writing accurate image captions that describe your whereabouts.

One of the practical benefits of choosing the Canon EOS 6D Mark II over the Canon EOS 5D Mark III or Canon EOS 5D Mark IV is that it’s smaller and lighter. If you’re familiar with the size and weight of an EOS 5D model then you’ll instantly become aware of its compact statue and slightly different feel in the hand when it’s picked up.

Although the handgrip isn’t quite as large as it is on the EOS 5D model, and the grippy leather-effect finish doesn’t extend all the way around the side of the body, it feels very comfortable and provides a satisfying level of grip to get a solid grasp when using the camera with long and heavy lenses.

Compared to the original EOS 6D, its dimensions are a fraction smaller. The reduction in size brings disappointing news to existing EOS 6D customers in that the older BG-E13 battery grip is no longer compatible. Those who’d like to improve handling in the portrait format and increase the camera’s stamina by powering it with a pair of LP-E6N batteries will need to buy the new BG-E21 battery grip (£199). 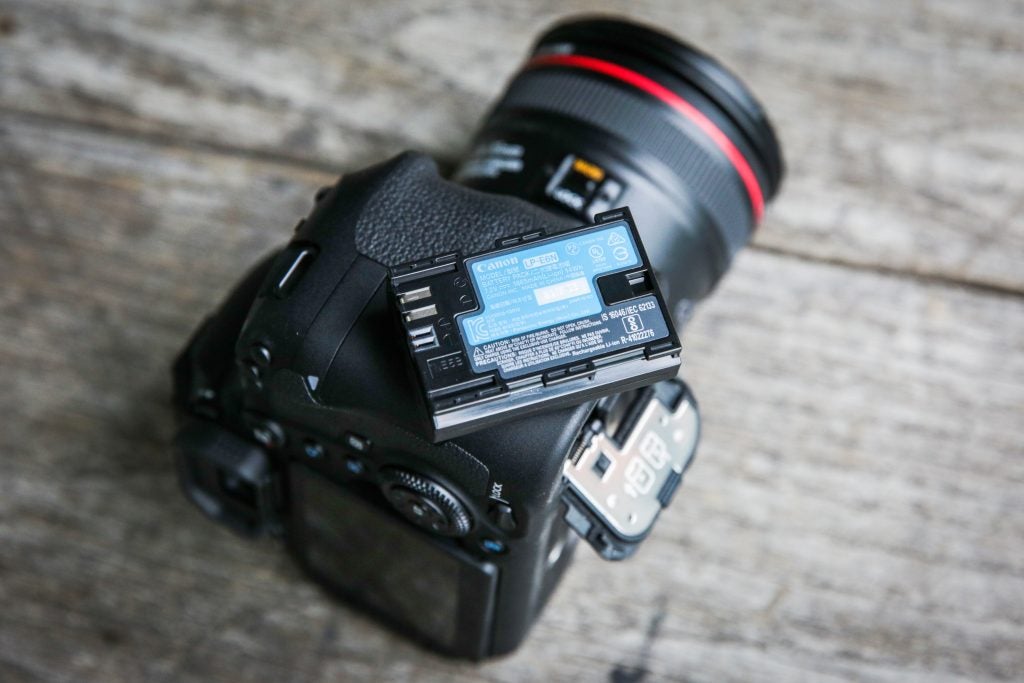 The chassis of the camera is made from aluminium alloy and polycarbonate resin with glass fibre, whereas the body is constructed from polycarbonate resin with special conductive fibre and glass fibre in some areas. Canon is well aware that it’s likely to fall into the hands of those who like to use a camera off-limits, or where the going gets tough, and has provisioned for this by making it dust and drip-resistant. It isn’t weather-sealed to the same standard as the EOS 5D Mark IV, but it survived a brief rain shower and had no problem keeping moisture at bay in typically damp Scottish weather.

Generally speaking, the camera is just as easy to operate as the original. Much of this comes down to the button placement being virtually identical to before. The on/off switch shoulders the left corner of the body, just below the mode dial, and advanced controls such as an AF-ON button perform back button focusing. Other buttons on the top plate let you access AF modes, drive modes, ISO and metering modes. 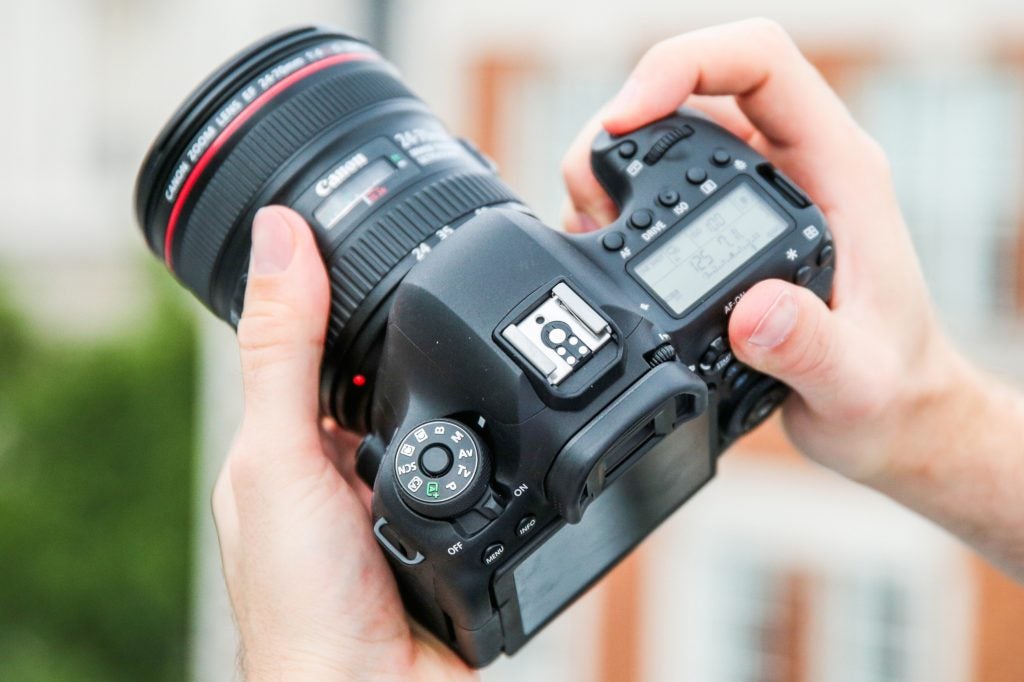 The camera lacks a button to take control of exposure compensation. In program, shutter priority and aperture priority modes, the rear scroll dial can be used to control this. However, you’ll want to bear in mind that it’s possible to knock the dial accidentally if you don’t use the lock switch beneath.

In manual mode you’re forced to go into the main menu or quick menu to access exposure compensation, which is a bit of a faff. It’s possible to reassign a button to exposure compensation from the custom functions menu, but in hindsight I’d have preferred it if Canon had merged it with the ISO button as it does on its EOS 5D-series.

Another difference between this camera and the EOS 5D-series is that you don’t get an intuitive joystick controller to nudge the AF point around the frame with your thumb. Like the original EOS 6D, this is ditched in preference of a four-way directional pad inset within a rotating rear command wheel, which now has a finer knurled texture. A new addition to the body, albeit a minor one, is the small button that’s located between the shutter button and top-plate dial. It’s used to toggle through the AF point selection choices and makes them easier and faster to get to.

The cameras single SD card slot at the side rules out any possibility of backing up files to a second card, spilling over to a second card when one becomes full, or assigning one card to the purpose of stills recording and the other to video. If any of these forms of backup are essential for your type of work, you’ll be better off looking at the EOS 5D Mark III or EOS 5D Mark IV. 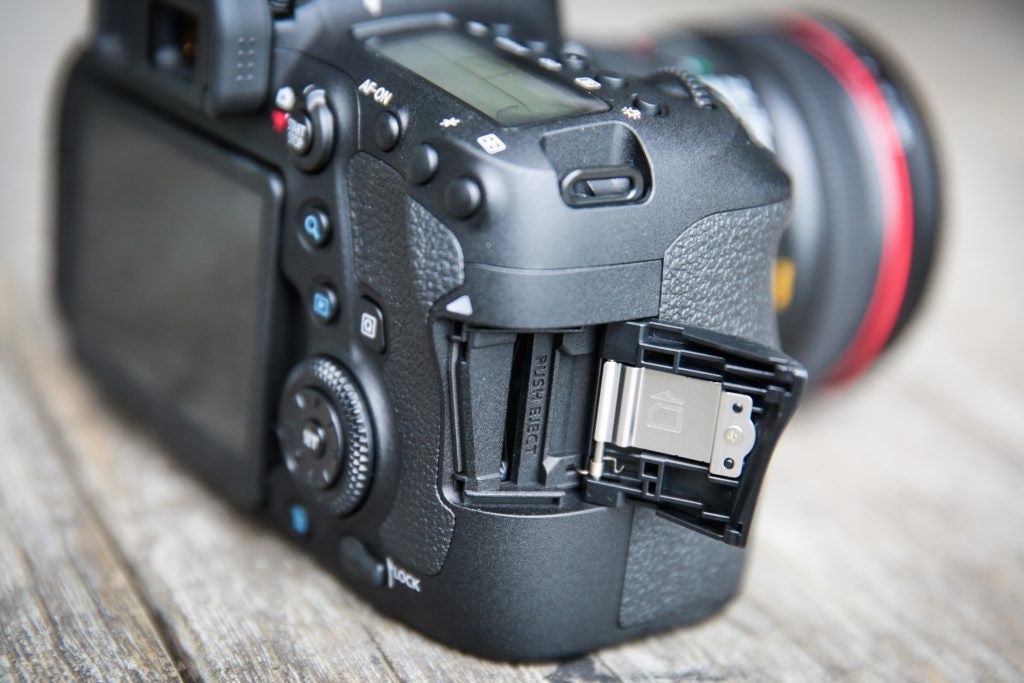 Just the single SD card slot at the side, which is UHS-I compatible.

One of the great things about the Canon EOS 6D Mark II is how quick existing Canon users will be able to pick it up and become familiar with it. It won’t feel intimidating for those upgrading from a double-digit or triple-digit Canon APS-C DSLR and neither does it feel too basic or like a huge step down from a more advanced EOS 5D-series model.