Viewed head on the 6D looks remarkably similar to the 5D Mark III at first glance, albeit slightly smaller. Closer inspection however reveals a number of subtle differences. For starters, the 6D isn’t as deep and consequently the handgrip isn’t quite as pronounced, while the buttons on the back of the camera have moved around a bit too. That said, overall build quality is still pretty high, although not quite in the same league as other models higher up within Canon’s full-frame DSLR range. The 6D is treated to magnesium alloy panels on the front and rear, and also benefits from a degree of dust and moisture proofing, albeit not to the same all-weather standards of the 5D Mark III. 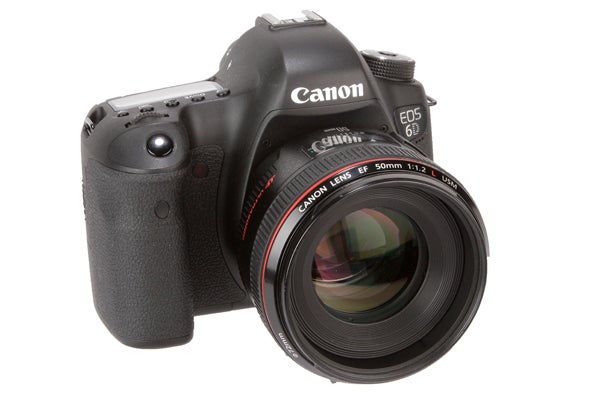 Button layout on the top-plate closely resembles what’s found on the 5D Mark III, save for the customisable M-Fn button, which has been dropped altogether. Button placement on the back of the 6D more closely resembles the 60D, with all of the buttons located to the right of the fixed LCD display rather than grouped in a line down the left-hand side. Those upgrading from the 60D should feel at home with how the 6D feels
in the hand – at 755g without a lens, the two cameras weigh practically
the same.

In terms of rear command wheels the 6D again follows the 60D’s lead rather than the 5D Mark III, with the 5D Mark III’s intuitive thumb-stick controller dropped in preference of a four-way directional pad inset within the rotating rear command wheel. This would be a problem, however there’s no dedicated exposure compensation button on the 6D and this function is instead controlled by the rear command dial. This arrangement means that it’s possible to accidentally knock the dial and change the exposure settings, which isn’t ideal. 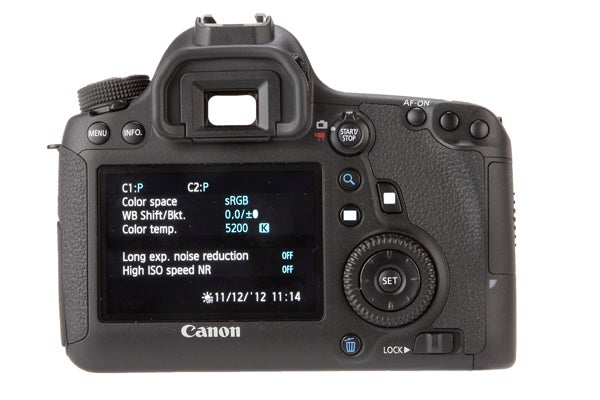 Using the camera in Live View mode (to shoot either still images or record movies) automatically switches the camera’s autofocus method from phase-detection to contrast-detection, which isn’t quite as speedy as it is when shooting though the viewfinder using the traditional phase-detection autofocus method. While shooting video we also found that taking manual control over focus resulted in smoother focusing transitions than using the camera’s automatic contrast-detect autofocus.

Having installed the free EOS Remote app onto our smartphone, the 6D’s built-in Wi-Fi was able to make a connection in seconds. We also liked how you can assign nicknames to regularly used Wi-Fi networks. Once connected, images are displayed on your smartphone or tablet in a thumbnail list alongside the relevant metadata. We were pleased to find that there was absolutely no delay or lag when zooming to assess image sharpness. As regards shooting remotely using your smartphone or tablet, you’re able to take full control of shutter speed, aperture, and ISO. Furthermore, you can also apply exposure compensation remotely, as well as pre-focus and fire the shutter.

Overall, we were impressed by both the smoothness and speed of the EOS Remote app and can see Wi-Fi on DSLRs becoming more and more popular, especially among wildlife photographers looking for a remote trigger that also offers good control over the camera’s main shooting settings. Our only issue is that Raw files can’t be wirelessly transferred. Instead, the 6D automatically converts Raw files to JPEG prior to transmission. 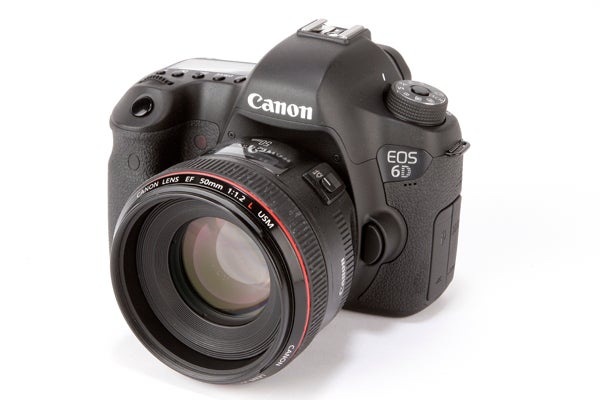 In order to test image processing and continuous shooting speed we loaded the 6D with a SanDisk Extreme Pro (Class 10) card. With this slotted in the 6D was able to shoot 90 large JPEG files at 4.5fps before the buffer filled and the shooting speed dropped. Switching to Raw, we were able to shoot 16 consecutive images, and in simultaneous Raw JPEG capture this dropped to seven consecutive images. Comparing this to the 6D’s main competitor – the Nikon D600 – the 6D is able to shoot more consecutive JPEGs before the buffer fills, although the two cameras are able to record a similar number of Raw files. The main difference between the two cameras in this respect is that the D600 is slightly faster at 5.5fps.

Overall, the 6D is a very responsive camera to shoot with and have no qualms about its overall build quality either; while it’s certainly lighter, smaller and not quite as solid as the 5D Mark III, it’s nonetheless well built and should have no trouble dealing with the wear and tear of day-to-day use. Ideally, we’d like to see a dual card slot to cater for CompactFlash users as well as SD although this would of course impact the overall size of the camera, which is presumably why Canon decided against it in the first place.