Although digital SLRs have been around since the mid-1990s, when Kodak produced digital adaptations of high-end Canon and Nikon 35mm SLRs, it is only since the launch in 2000 of the beautiful but deeply flawed Contax N Digital, that the market for “consumer” digital SLRs has grown. In that short time the market has already stratified into distinct sectors, from the fiercely contested sub-£500 mass-market category, all the way up to the £2000+ professional cameras such as the Canon EOS 1Ds MkII and Nikon D2X. 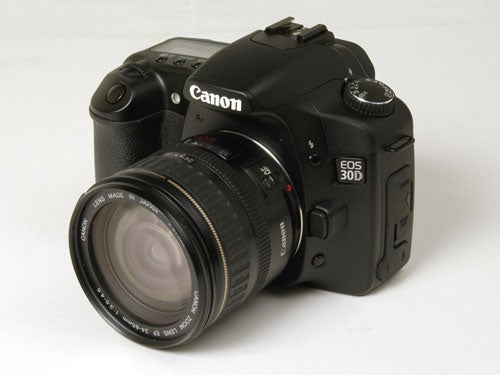 In between these two extremes you’ll find the mid-range cameras, aimed at keen amateur or semi-professional photographers, and priced between £600 and £1200. Examples include the Nikon D200, Olympus E-330 and the Fujifilm S3 Pro. Canon has also recently launched a new camera into this range, in the shape of the EOS 30D. 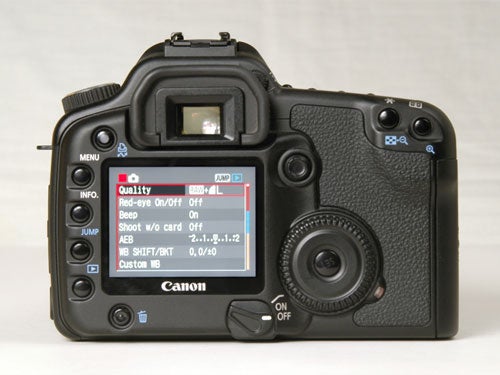 The 20D has, in many ways, defined the mid-level DSLR market for the past two years. With an 8.2MP CMOS sensor, award-winning DIGIC II image processing engine and robust magnesium-alloy body, it was clearly a winning formula. So much so in fact, that Canon has barely changed it at all for the new model. As product upgrades go the new EOS 30D is something of a disappointment.


Admittedly there is a long list of improvements, but they are all somewhat superficial. The 30D gets a larger and sharper 230,000 pixel 2.5in LCD monitor, a larger selection of ISO settings at 1/3-EV intervals, and spot metering, something that was inexplicably omitted from the 20D. Other additions include a slightly larger image buffer, an RGB histogram function, a second lower speed continuous shooting setting (3 fps as well as 5fps), and a new more durable shutter mechanism that is supposedly good for 100,000 shots. Changes to the ISO setting are now shown in the viewfinder, and file sizes are shown in playback mode. I’ll pause here for your pulse to stop racing. 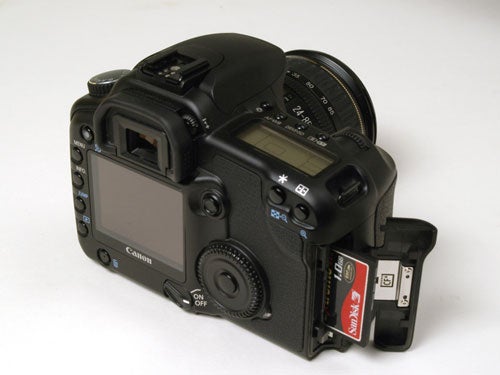 The only other significant change is in the colour adjustment system in the menu. The 30D has a wider range of adjustments for colour tone, saturation, contrast and sharpness, which can be grouped into ‘Picture Style’ settings. This makes it a lot easier to set up shots to cope with difficult lighting conditions, or to produce specific effects, especially if you need to store those settings for later re-use. 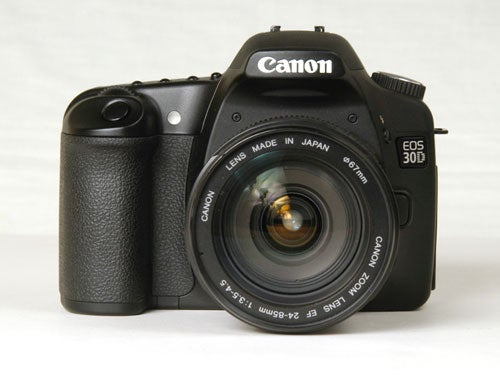 The body, the control layout and all other internal systems are, as far as I can tell, identical to the 20D. It still has the same 35-zone evaluative metering system, 9-point AF system and 100-3200 ISO range. According to the spec sheets for the two cameras, the 30D is 2mm wider, although for the life of me I can’t see any difference when comparing the two models side by side. It is also approximately 20g heavier, however on a camera that weighs 785g with the battery this isn’t likely to make that much of a difference.


Also largely unchanged is the price. The EOS 20D is still available while stocks last, and can be found for around £725 body only. While the recommended retail price of the 30D body is £1099, it is already being advertised for around £780. 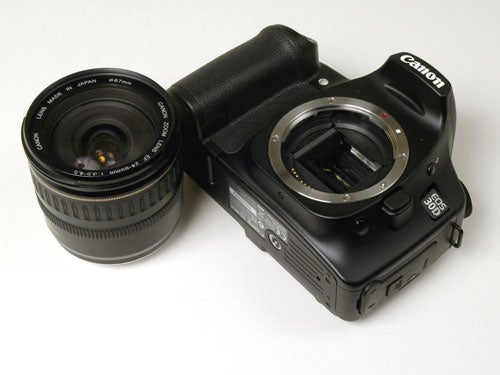 While I was out shooting the sample pictures for this review, I bumped into another photographer who was using a 20D. We chatted for a while, and compared the two cameras. I explained the few changes and the many similarities between the two models, and let him have a go with the 30D. He looked it over, took a few shots, and then informed me that since he couldn’t really see any advantage to changing, he’d be keeping his current camera, and to be honest I can’t say I blame him. After all, this exactly what Canon has done.


I think everyone was expecting that the EOS 30D would have a 10MP sensor, to put a bit of space between it and the 8MP EOS 350D. The problem with that however is that it would then have been undercutting the market for the £1800 12.8MP EOS 5D. In terms of image size there’s a lot less difference between 10MP and 12MP than there is between 8MP and 10MP, so people who were considering splashing out on a 5D might have been tempted to save themselves over £1000 and go with the 30D instead. The only other option, increasing the price of the 30D to a mid point between the 350D and the 5D, say £1200, would go against the market trend of falling prices for improving specifications. 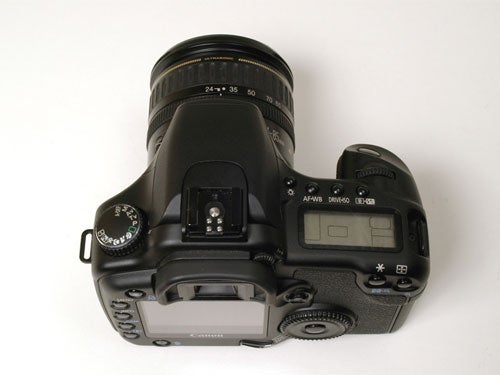 Bearing all that in mind, the EOS 30D is nonetheless a great camera, arguably the best mid-range DSLR on the market. The body is heavy enough to provide stability while shooting without being tiring to use for long periods, and the large handgrip is both comfortable and secure. The control system, with one adjustment wheel on the top of the handgrip and a large rotating thumbwheel for menu selections, is quick, efficient and comfortable to use. The wide range of external controls means that you hardly ever have to go into the menu system. 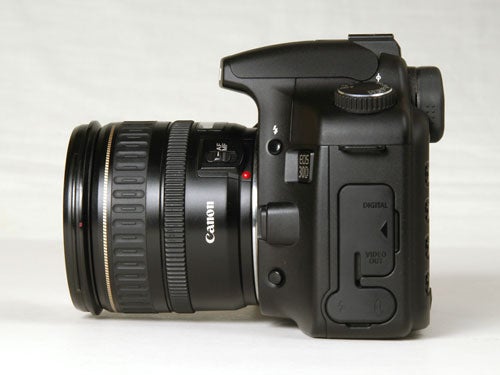 Canon’s 8.2MP CMOS sensor produces more detail, greater dynamic range and less image noise than any comparable CCD sensor, and the DIGIC II processor deserves every accolade it has won. Shooting in a range of weather conditions from dull and overcast to bright sunshine, I found that even shooting only in program mode with default colour settings the camera turned in nothing but superb shots time after time. Using the ‘Faithful’ picture style setting, colours were natural-looking, with a good level of detail and contrast. Exposure was near-perfect even in tricky conditions. I didn’t even have to use the spot metering.


Examined closely, the images did show a slight softness, but responded extremely well to a light application of Photoshop’s Unsharp Mask. This may sound like a fault, but most serious photographers prefer to work this way, shooting in RAW mode and then processing images later at home. It’s a lot easier to add sharpening after shooting than it is to remove excessive sharpening applied by the camera. However if you prefer, the 30D has seven levels of adjustable sharpening. 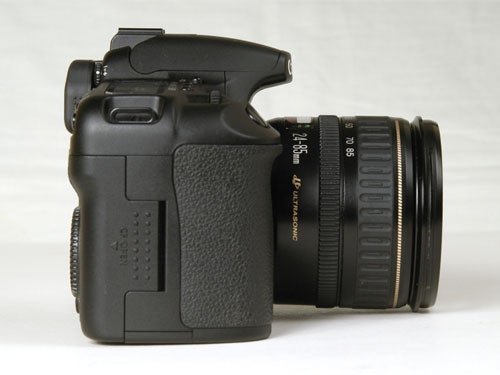 The AI autofocus system is astonishingly fast, possibly the fastest of any SLR I’ve used, and the selective focus point, adjusted using a small joystick device on the back of the camera, is also very adaptable and easy to use.


A bit of a disappointment for anyone hoping for a major upgrade, the EOS 30D is unlikely to attract anyone who already owns a 20D. However newcomers to the mid-level DSLR market will find a superbly specified camera with the usual Canon hallmarks of reliability, design and outstanding image quality. For the serious amateur or semi-pro it is the ideal camera.

Note: The EOS 30D has 14 ISO settings between 100 and 3200. However under normal use only 100-1600 are used, and to save space we’ve only shown a representative sample here. The shots were taken in natural ambient light using default settings and program exposure mode. Light levels rose and fell between shots due to the weather. 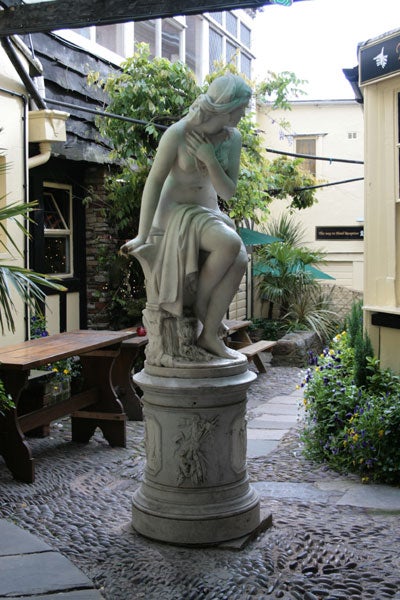 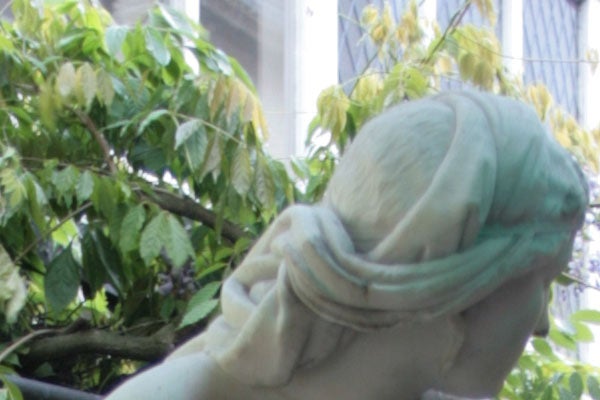 At the lowest ISO setting the picture is completely noise-free and smooth as polished marble. 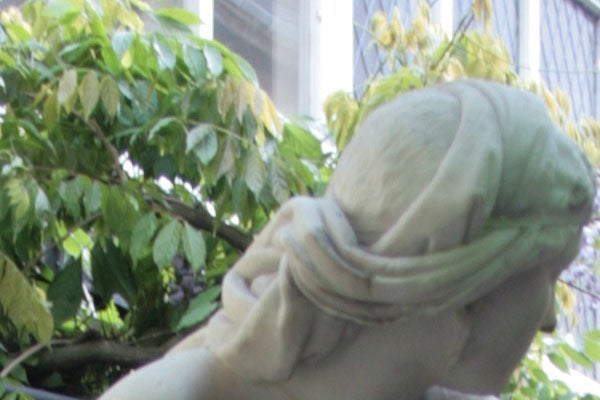 At 200 ISO there is no noticeable difference between this and the previous shot. 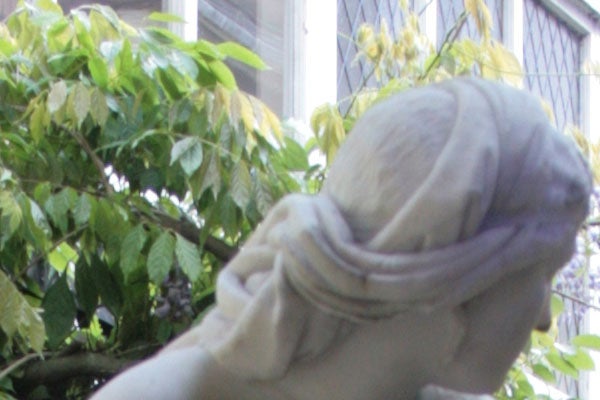 At 400 ISO there is a hint of image noise beginning to appear in the shadow areas, but the majority of the image is still sharp and smooth. 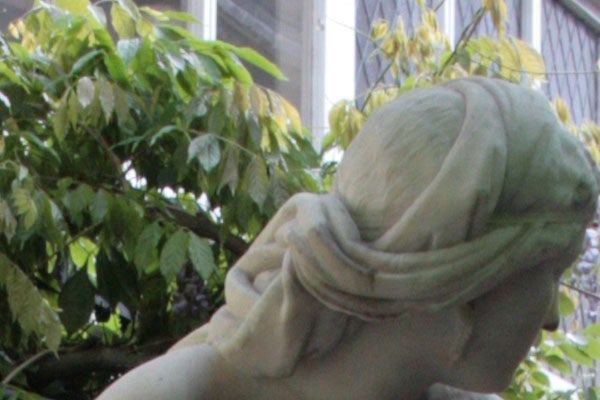 At 800 ISO the same levels of noise have now spread to the mid-tone areas as well, but on the whole the image is still very good, and quite printable. 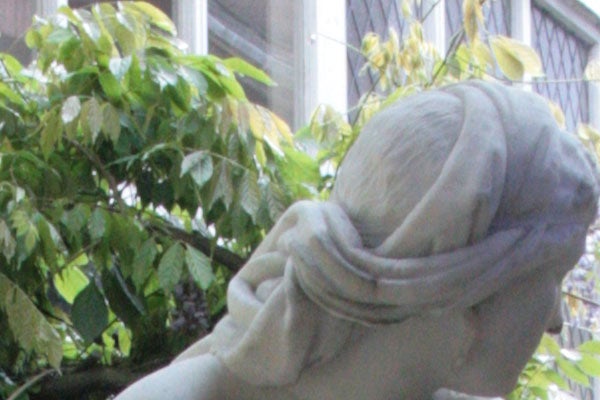 At 1600 ISO the shot is, surprisingly, almost identical to the 800 ISO sample. In fact I had to check the EXIF data to make sure I had the right shot. Impressive. 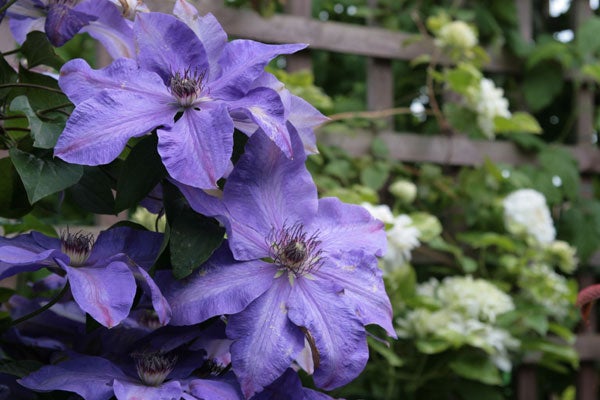 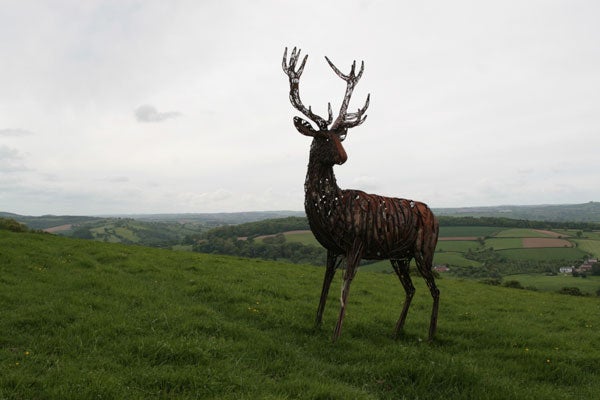 Shooting against the sky, many metering systems would have produced either burned-out highlights or a silhouette, however the 30D has retained detail in both areas. 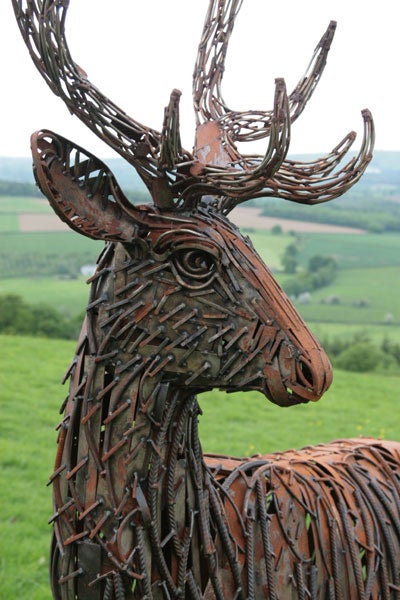 Amazing what you can do with a bit of rebar and a MIG welder. This chap is sitting in a field north of Exeter, out in the middle of nowhere. Also, no purple fringes. 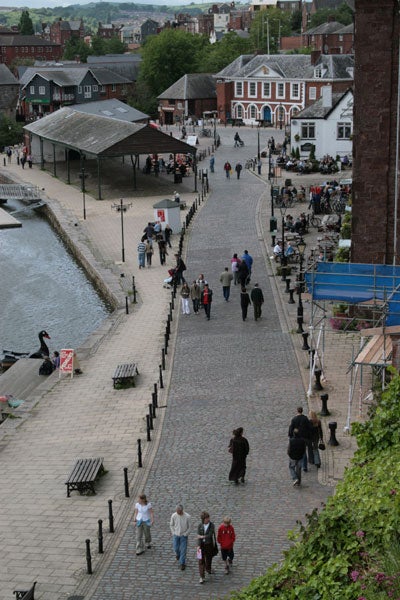 Close examination of this shot reveals a little softness, but a light dusting of Unsharp Mask in Photoshop brings out an amazing level of detail. 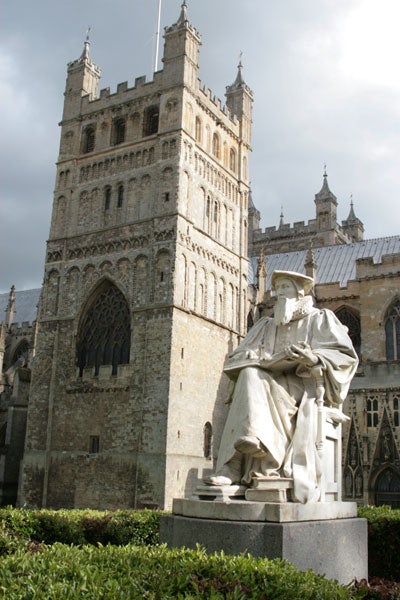 The 9-position selectable AF point is useful when you need to focus on something the isn’t in the centre of the frame. 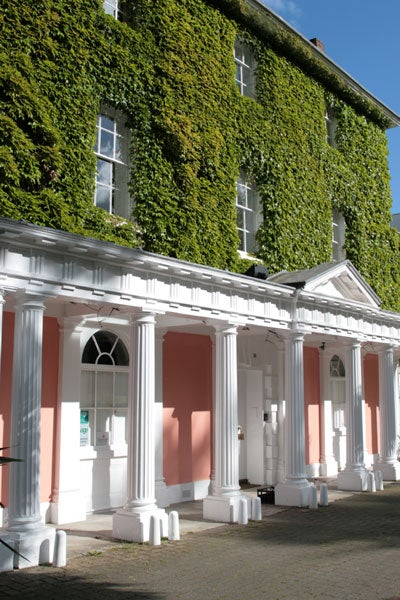 Shot on one of the few sunny days we’ve had recently, this beautiful building provides a great example of how not to burn out highlights. 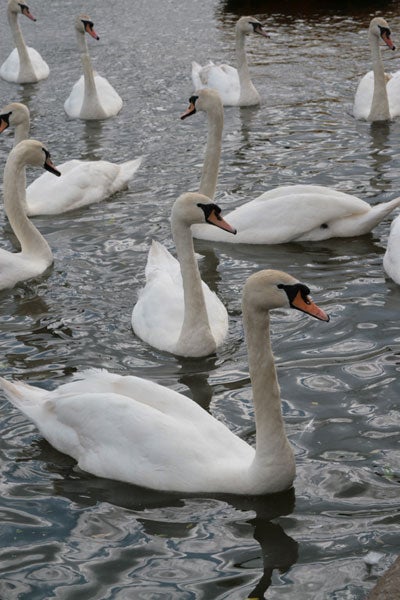 The ultra-fast AF system and zero shutter lag are perfect for capturing subjects that move in and out of the frame unpredictably.