Vari-angle screens have always typically been found on more advanced models in the EOS lineup, so it’s refreshing to see one introduced on the entry-level EOS 200D. It’s one of the major advancements over the EOS 100D and makes it a real pleasure to use when composing images from almost any angle or position. 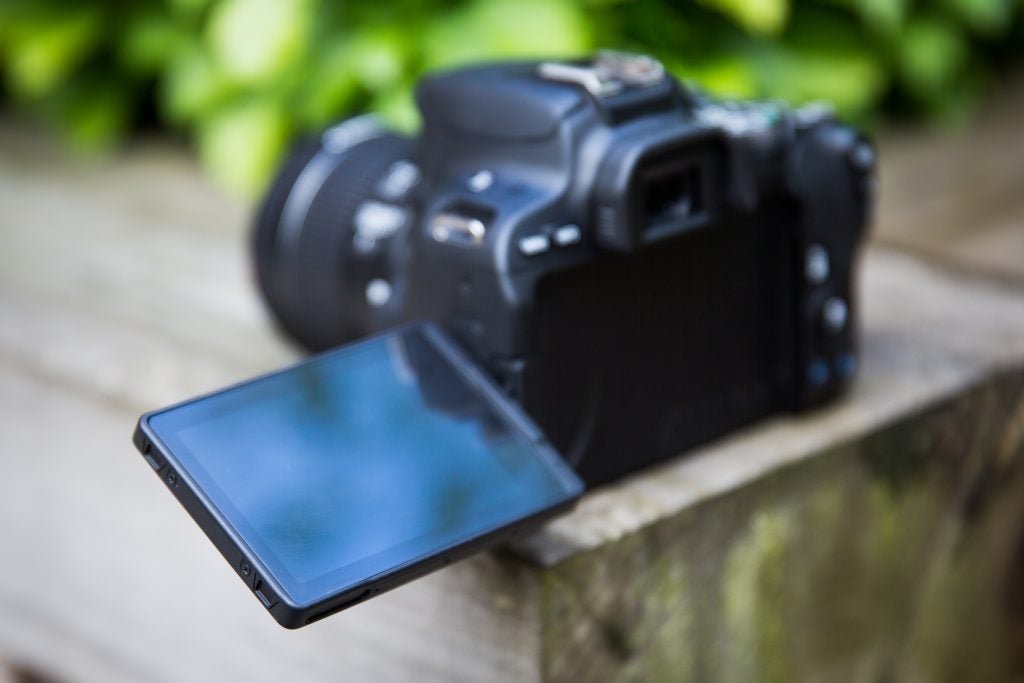 It takes the pain and hassle away from crawling on your knees or randomly aiming to get a shot only to later find it was taken askew. A small notch has been cut out of the body just below the Live View button to make it easy to pull out, and the good news is that the screen sits virtually flush to the back of the camera when it’s pushed back in.

The way Canon implements touch control on its DSLRs is excellently executed. You can use it to navigate the menus and change settings from the quick menu or control the camera conventionally using its buttons. The touchscreen is so sensitive and precise you’ll find that you rarely press an incorrect icon or menu setting. 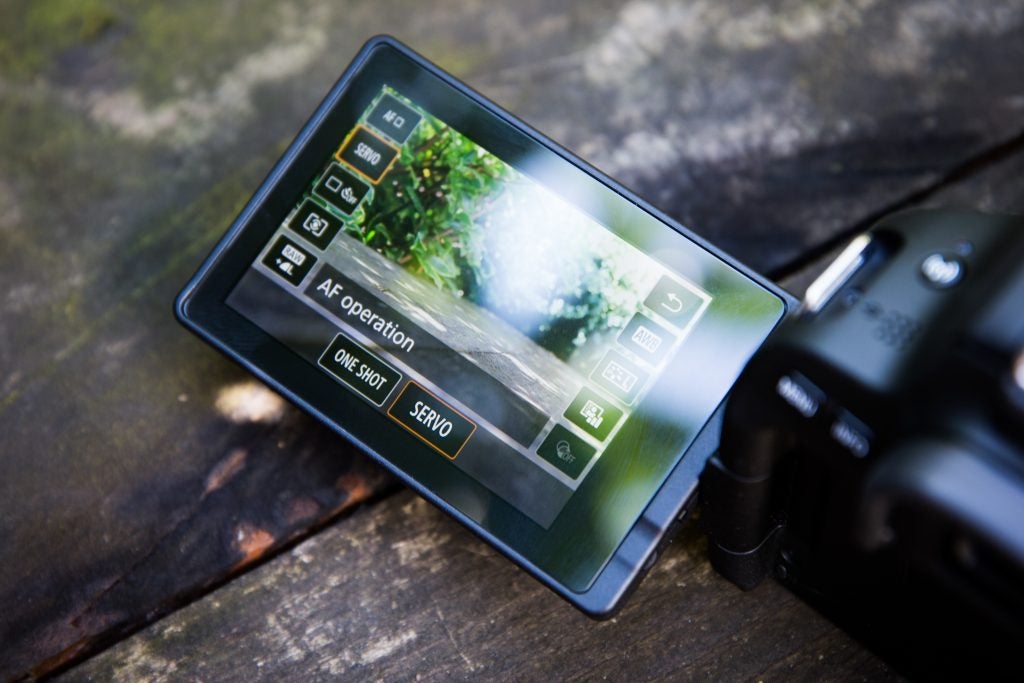 Touch control of the screen also comes into its own for inspecting images in playback mode where you can use pinch and zoom gestures like you would on a mobile device to zoom in. You can also double-tap the screen in playback to instantly pull up a magnified view, while hitting the Q button in playback opens a range of options such as being able to rate, resize and rotating images.

Canon is well aware of the fact that operating a DSLR via its touchscreen alone won’t be for everyone and has had the foresight to include an option to disable touch control altogether. 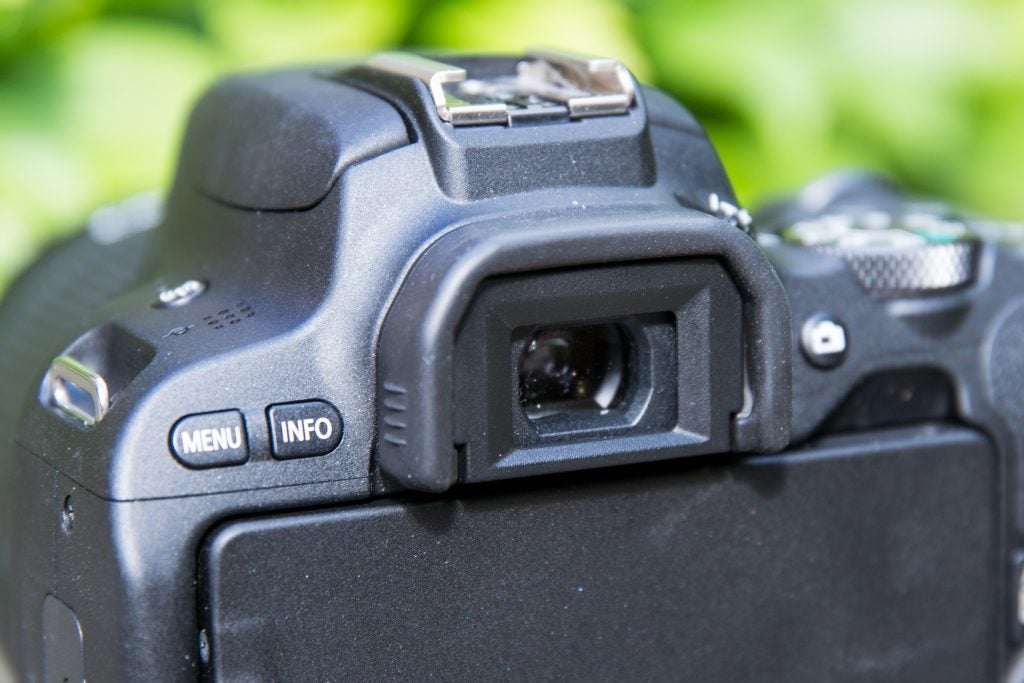 Like the EOS 100D, the optical viewfinder seems surprisingly large for one that covers 95% coverage of the frame with 0.87x magnification. It can’t be customised to display things like the drive mode or battery level, but it can be setup to prompt you when the monochrome picture style or spot metering is set and does so by displaying an explanation mark in the bottom left corner.

A rubber eye cup helps cushion the viewfinder against your eye and there is dioptre control to adjust it to your eyesight.

Raise the viewfinder to your eye, or hit the AF point selection button when the screen is active, and you can view the sum total of 9 AF points on offer. 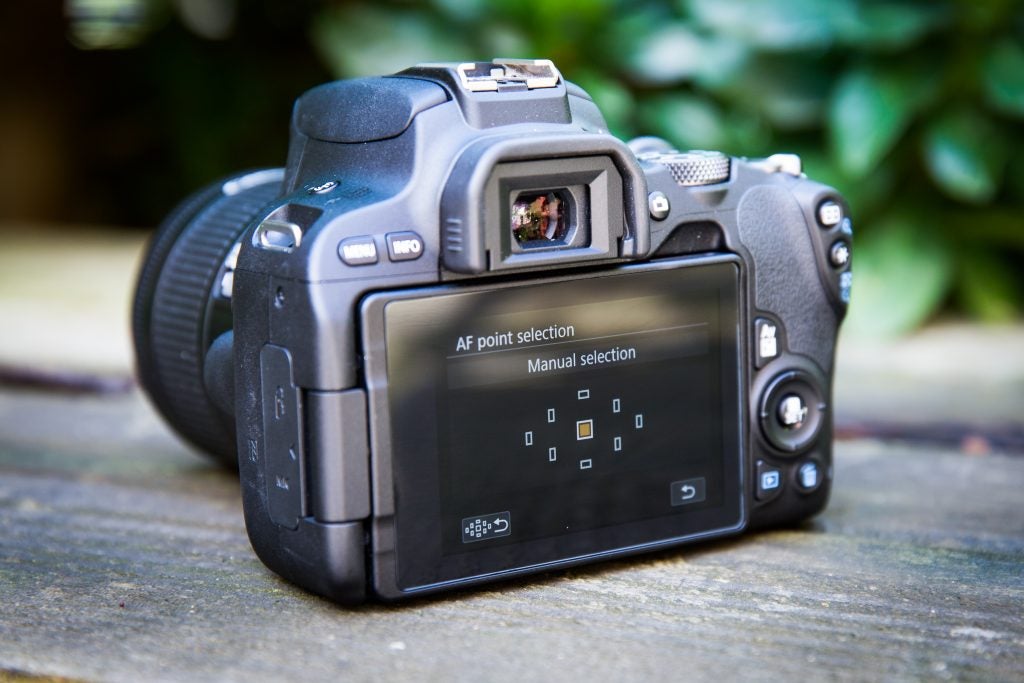 Though some may be sceptical of the low number of AF points, they are spread fairly widely across the frame. Testing the camera in a challenging low-light scene revealed that the centre cross-type AF point is by far the most accurate at acquiring focus quickly, so you may find yourself half depressing the shutter to focus before reframing from time to time. 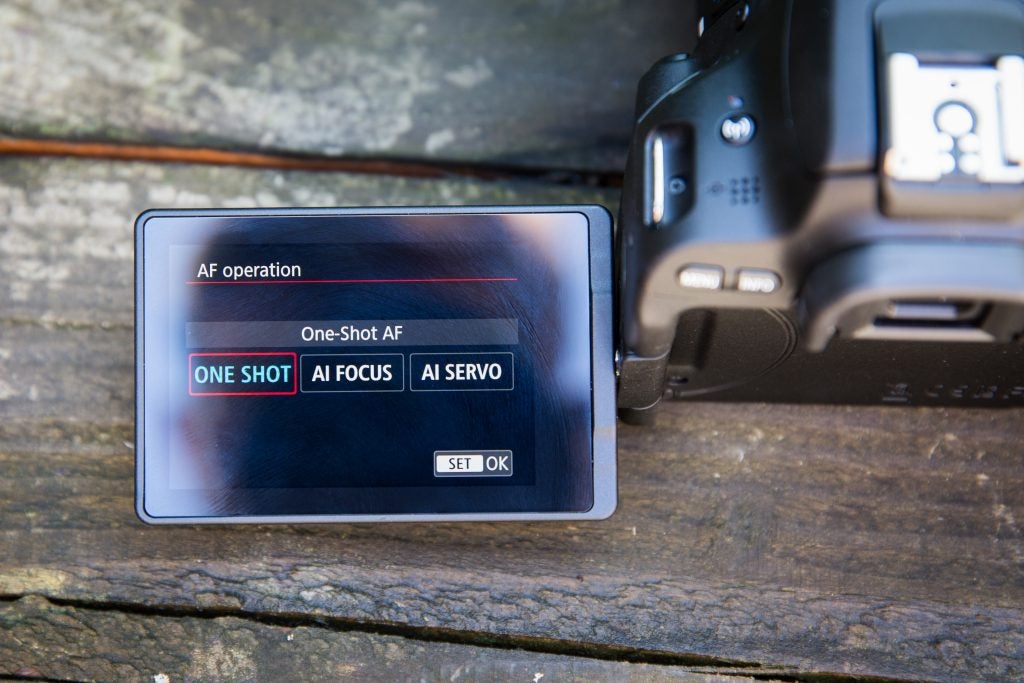 The introduction of Dual Pixel AF has  made the EOS 200D far superior to the EOS 100D when it comes to focusing in Live View. The AF method options you get when shooting stills or movies in Live View are excellent, and while most users will stick to using one-shot AF for static subjects, there’s the option to employ continuous focus (AI servo) to acquire fast focus on moving subjects.

Some users may also like to experiment with the camera’s tracking AF method, which requires you to pin-point the subject you’d like the camera to follow and focus by first tapping the screen. It’s fairly responsive, but as with other recent Canon DSLRs I have tested, I tended to get better results of fast-moving subjects by tracking the subject in the centre of the frame with the AF method set to zone AF while the AF operation was set to Servo.

The EOS 200D doesn’t support 4K-movie recording, however those who enjoy shooting the occasional video can do so at Full HD (1920 x 1080) quality at up to 60fps. Other available frame rates include 50fps, 30fps, 25fps and 24fps. A glance at the left side of the body reveals there is a 3.5mm stereo mini jack should you wish to plug in an external microphone and improve the quality of audio.

Switching to video mode is easy enough from the on/off switch and the video options you’re most likely to need are easily accessed on screen. 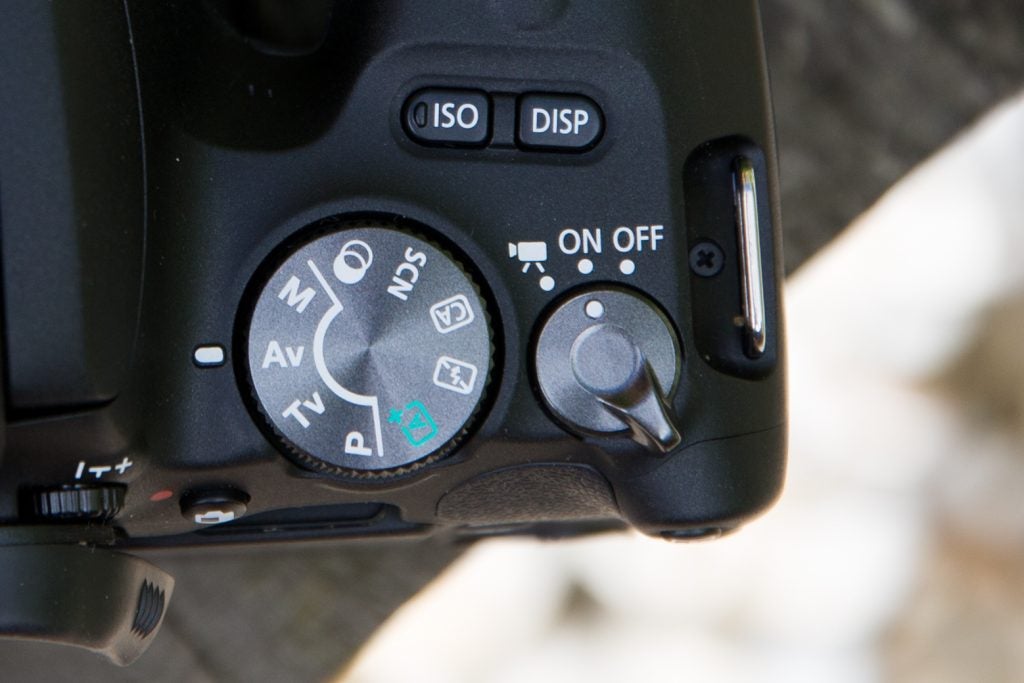 Continuous focusing (Servo AF) can be turned on and off from the bottom left corner, there’s the option to magnify the screen feed up to 10x from the lower right corner to aid manual focusing and you can adjust the exposure compensation by up to +/-3EV during recording. The quick menu up at the top right offers access to other important video settings such as movie record size, video snapshot mode, pictures styles, creative filters and white balance.

One feature that we’ve seen added to many Canon DSLRs of late is 5-axis digital stabilisation for video, however this advanced feature isn’t present on the EOS 200D. Users will want to bare in mind that it’s not as easy to create shake-free footage without additional support as it is with a more advanced models like the EOS 800D or the EOS 77D.

We’ve seen Canon roll out its new Guided User interface across several DSLRs now, including the EOS 800D and EOS 77D. It has been designed to aid newcomers to a DSLR who’d prefer a more animated menu and some basic shooting advice based on the exposure mode that’s selected.

For example, with shutter priority mode selected, the rear LCD reveals a slider graphic of where in the shutter speed range the shutter speed is currently set to. Tapping the Q button gives users the opportunity to increase or decrease the shutter speed using the touchscreen as well as adjusting exposure compensation, drive mode, focus position and the method of focusing (One Shot, AI Focus, AI Servo) from the same screen. 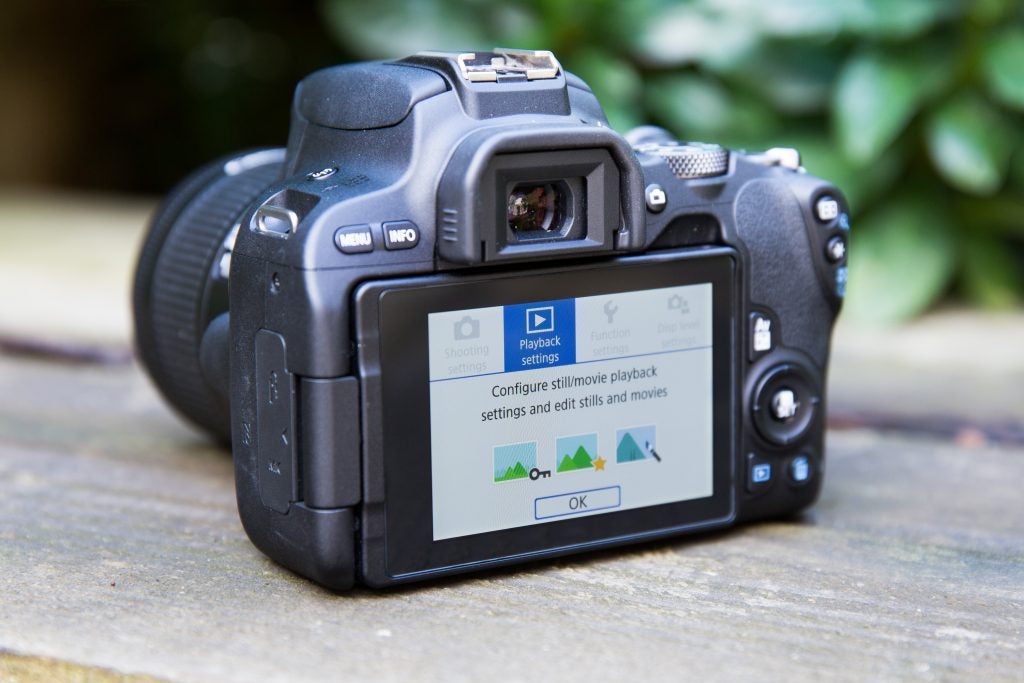 The advice doesn’t go into any great detail, but should prove useful to users just starting out with a DSLR who may be unsure of how changing key camera settings will affect their images.

As for the Guided menu display, this simplifies the standard menu display, by grouping all four sub-menu tabs – Shooting, Playback, Function and Display Level – together on a single screen, with a brief description of what you can expect to find within each. The good news is that both the shooting screen and menu display are optional so when you feel you have outgrown them or are ready to master the standard displays they can be switched off.