It retains most of the 1300D’s core features, with the main upgrade being a boost in sensor resolution. You don’t get too many exciting bells and whistles, but it does offer a route into the fun world of DSLR photography at a pretty low price point.

If you have a little more cash to splash, then you might consider Canon’s ‘premium’ entry-level model, the EOS 800D. Or, if you’re really struggling to get together some funds, the EOS 4000D (currently in our test lab) is Canon’s super-cheap model.

Smaller mirrorless cameras such as the Panasonic GX80 are also worth considering, but few offer a built-in viewfinder at the EOS 2000D’s price point. 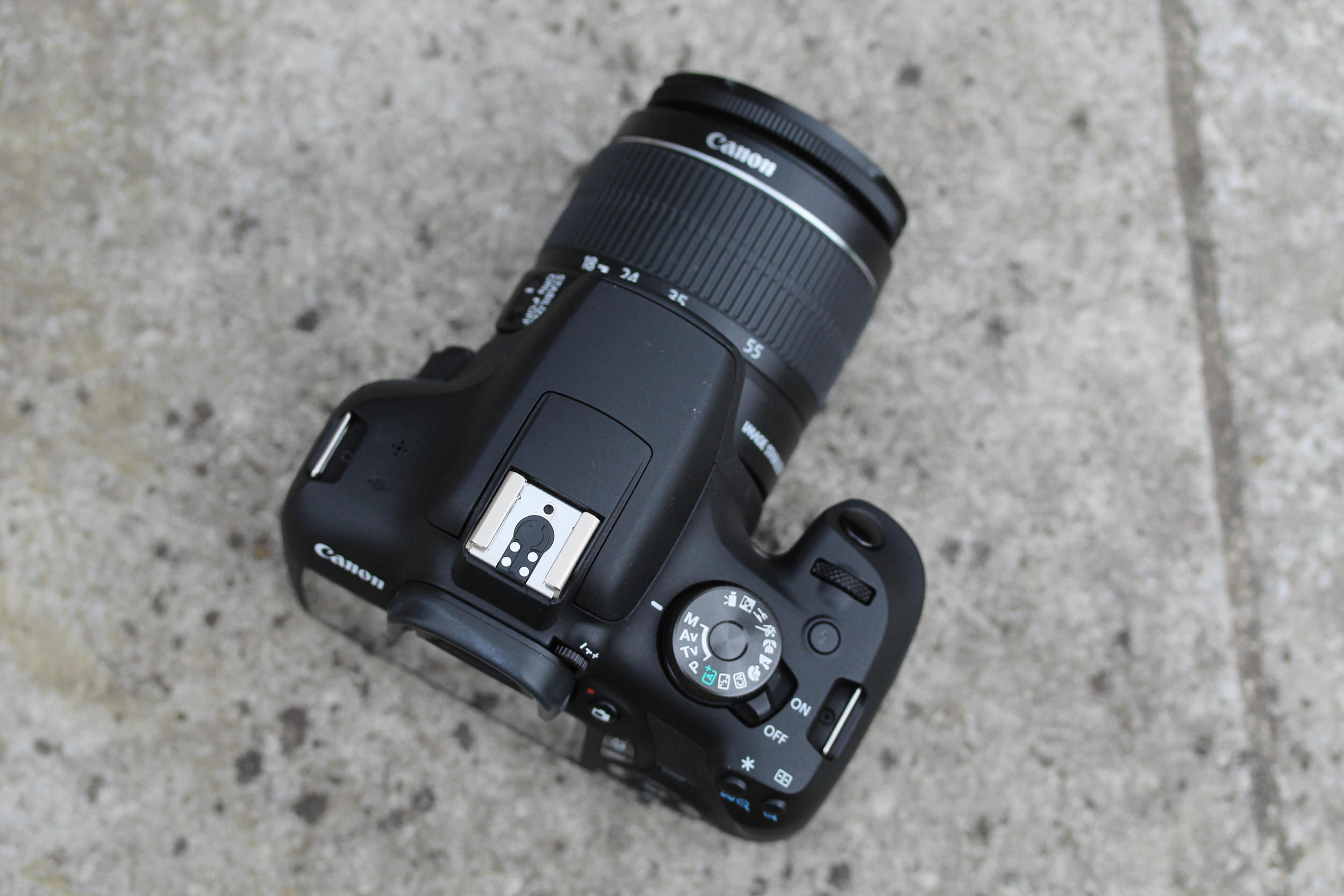 The EOS 2000D isn’t a radical reinvention of the 13000D. That isn’t strictly a bad thing, but it’s disappointing that features starting to become the norm still aren’t included in Canon’s entry-model. 4K and a touchscreen being two that spring to mind.

The 2000D’s main change from its predecessor is the sensor. It remains a APS-C CMOS device, but it now has 24.1 megapixels, compared with the 18 megapixels of the 1300D’s much older sensor.

We’ve seen this 24.1-megapixel sensor before, in the EOS 750D, but it’s a generation behind the one found in the 800D. If you’re already shooting with a 1300D, it’s unlikely to be enough of an upgrade to consider switching to this model. But if it’s your first DSLR then you might well appreciate the bump in resolution, since it provides greater scope for cropping your photos or printing them out at larger sizes. 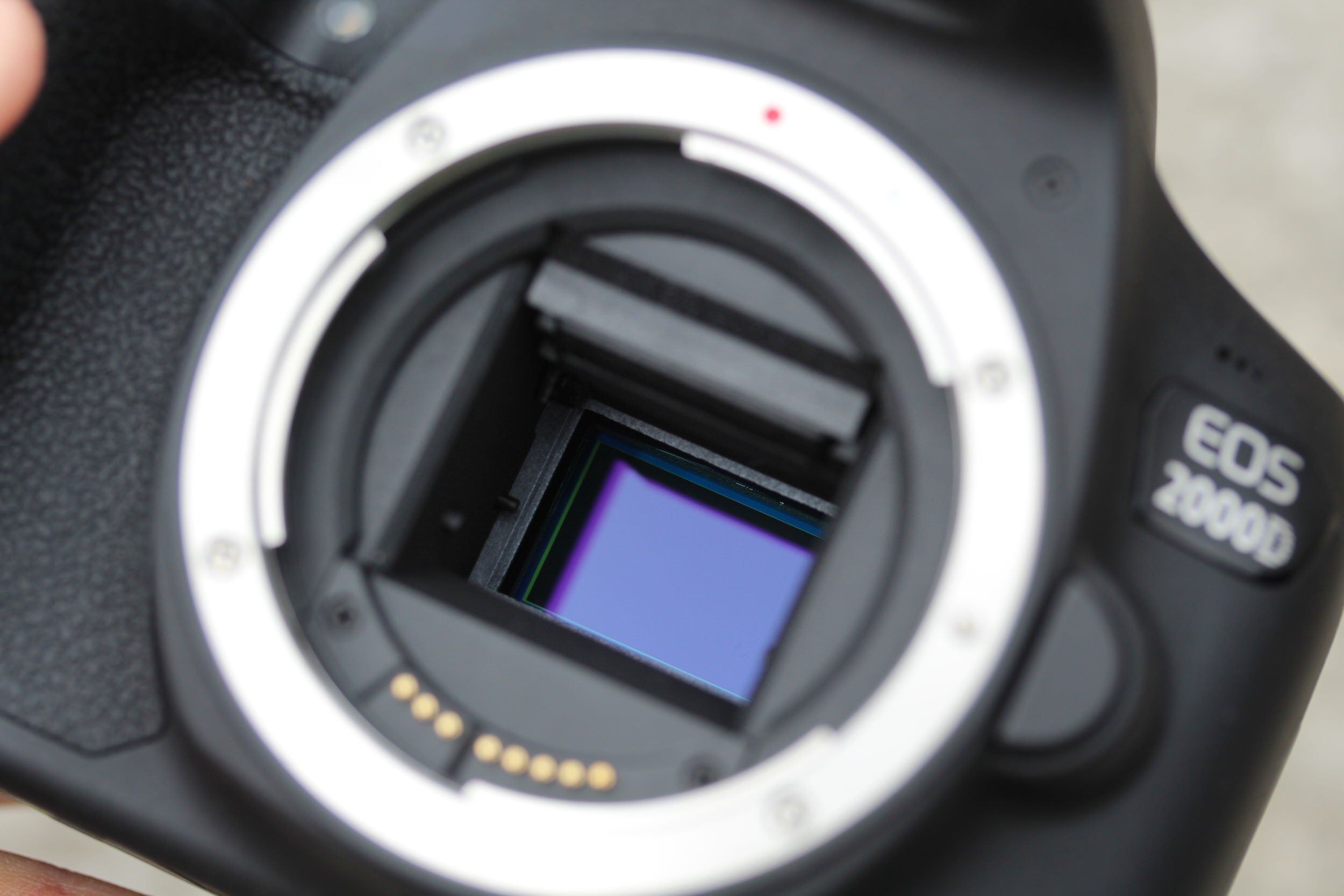 To keep costs down, the 2000D uses Canon’s older Digic 4+ processor, which is the same that features in the 1300D. Newer Canon models such as the EOS M50 are now using the Digic 8 processor, but it still offers decent performance for basic shooting.

You get a native sensitivity range of ISO 100-6400, which you can expand up to 12,800. Similarly, the 9-point AF system is identical – but, sadly, doesn’t make use of the Dual Pixel AF you’ll find in other Canon DSLRs.

Still, even though there’s no 4K video for vlogging, Full HD video recording is present. Wi-Fi and NFC connectivity is on board, but there’s no Bluetooth, which is similar to other Canon entry-level DSLRs, including the EOS 800D. This is disappointing, since low-power Bluetooth lets cameras keep a constant connection with a smartphone for easy photo sharing. 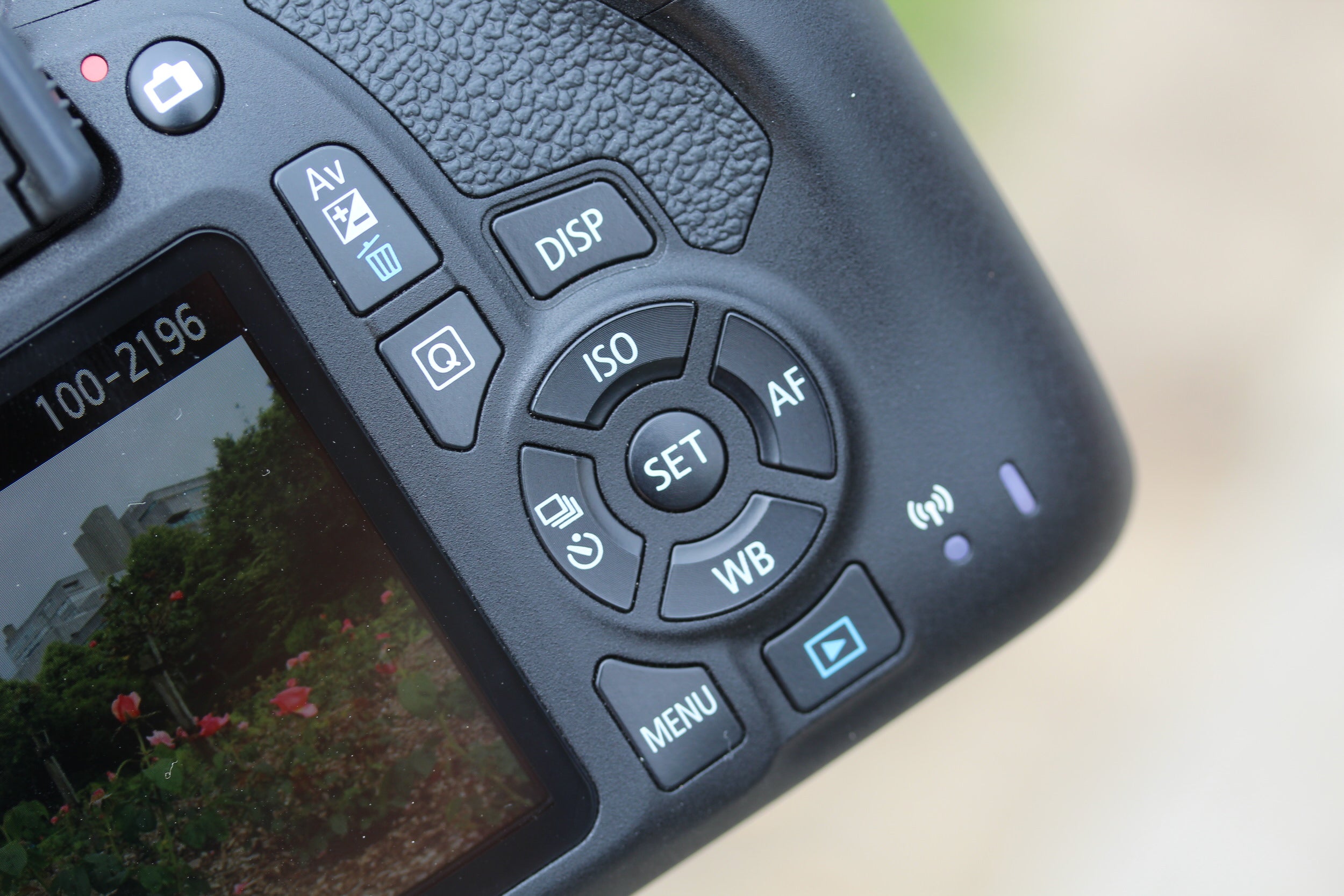 In the hand, the 2000D doesn’t feel premium, but it’s helped a little by a textured coating around the reasonably chunky grip. Buttons are both well-sized and well-placed, with a large mode dial on the top of the camera. A bunch of mostly self-explanatory buttons can be found on the rear of the camera, to control its various settings.

Another feature inherited from the 1300D is the optical viewfinder, which offers 95% coverage of the frame. Bear this in mind when composing your images, as something might creep into the edge of your shot.

Some people are adamant that optical viewfinders are better than electronic. Both have their benefits and downsides. For example, an optical viewfinder offers a bright, real-time view of what you’re seeing, minus lag or noise in low light. But it can’t display the changes you’re making to a shot in real-time, unless you switch to Live view on the screen.

These days, we’d take a high-resolution EVF over optical units that leave bits out of the frame. But optical viewfinders are much more affordable a have battery life benefits too. 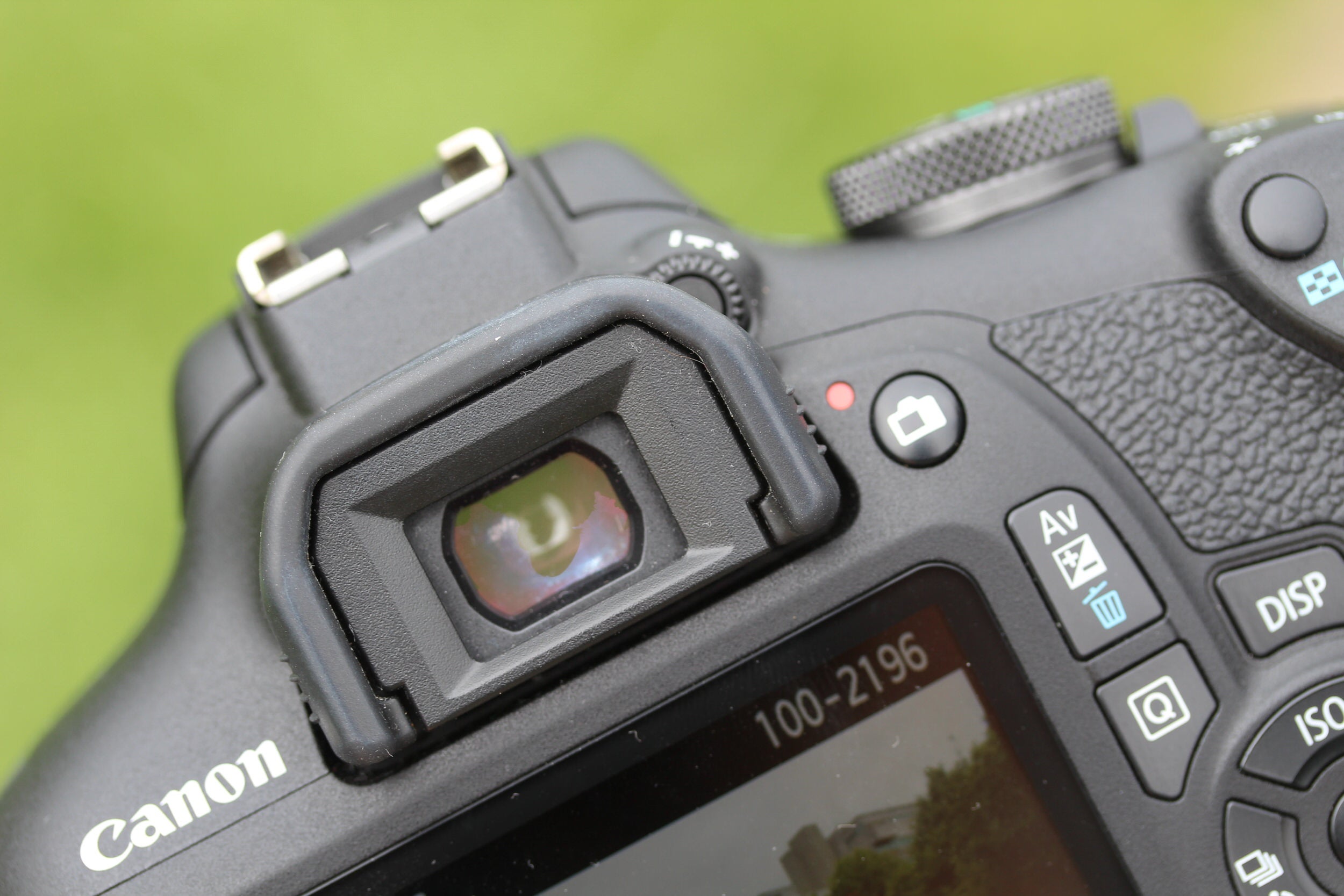 Similarly, the screen is also the same as the 1300D’s: a fixed, 3.0-inch, 920k-dot panel. Not being able to tilt or articulate it is less than useful for awkward angles (or selfies), but the viewing angle is reasonably good, and the display itself is bright and clear.

There’s no touch functionality here – a disappointment for a camera in 2018 – but an understandable decision taken by Canon in order to keep the 2000D as affordable as possible.

You can tell that the 2000D’s 9-point AF system has been around for some time; it’s really starting to show its age now. Grouped around the centre of the frame, 9 points don’t give you a whole lot to work with, so you’ll probably find you spend much time focusing and recomposing if your subjects are anywhere off-centre.

In terms of performance, only the centre point is of the more sensitive cross-type. You’ll want to engage this point as light levels drop – but, otherwise, the other focus points do a decent job of locking onto the subject in ordinary daylight.

You can activate the screen to shoot in Live view, but since the 2000D doesn’t utilise Dual Pixel CMOS AF, don’t expect focusing speeds to be lightning-quick. Still, it’s a good option for still-life and macro-type subjects – or anything you might be shooting with the aid of a tripod.

If you’ve got any intention to shoot action or sports, the 2000D is a pretty poor choice. It offers just 3fps shooting, meaning you’re likely to miss key pieces of the action. 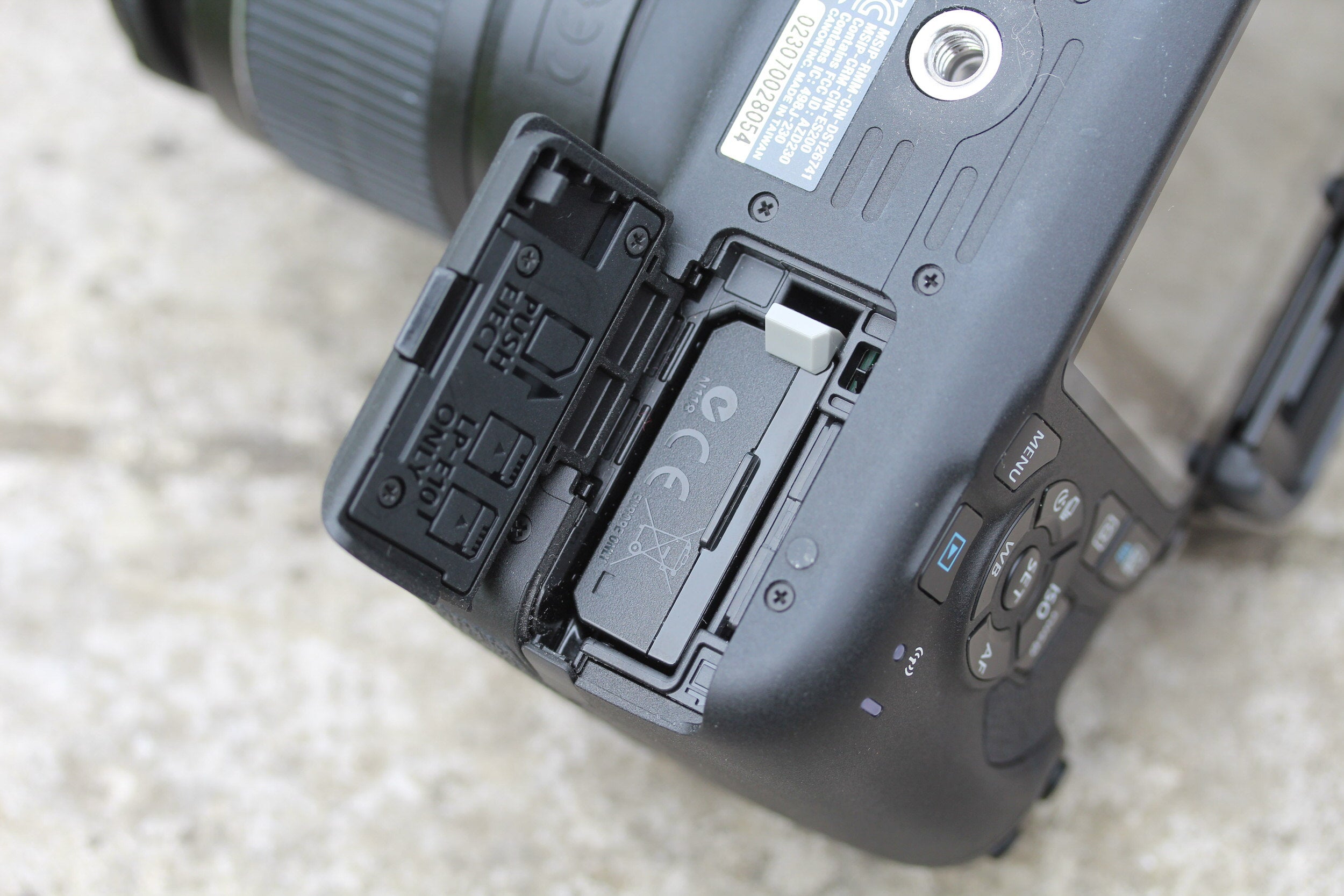 The 2000D’s battery life is rated at 500 shots. This is one area where DSLRs still have the upper hand over similarly specced and priced compact system cameras. There’s enough juice to last you at least a couple of days of average shooting.

While the Canon EOS 2000D might not have some of the most exciting specs on the market, it still delivers decent images – especially in good lighting conditions.

Here are some sample shots, which display the camera’s capabilities. Full HD video is also nicely rendered, and while this is unlikely to be a camera that particularly appeals to videographers, for those who just want to grab a few home movies and the like, it’s a good alternative to your phone. The supplied kit lens does a decent job of producing high-quality images, making it a good option to get you going. 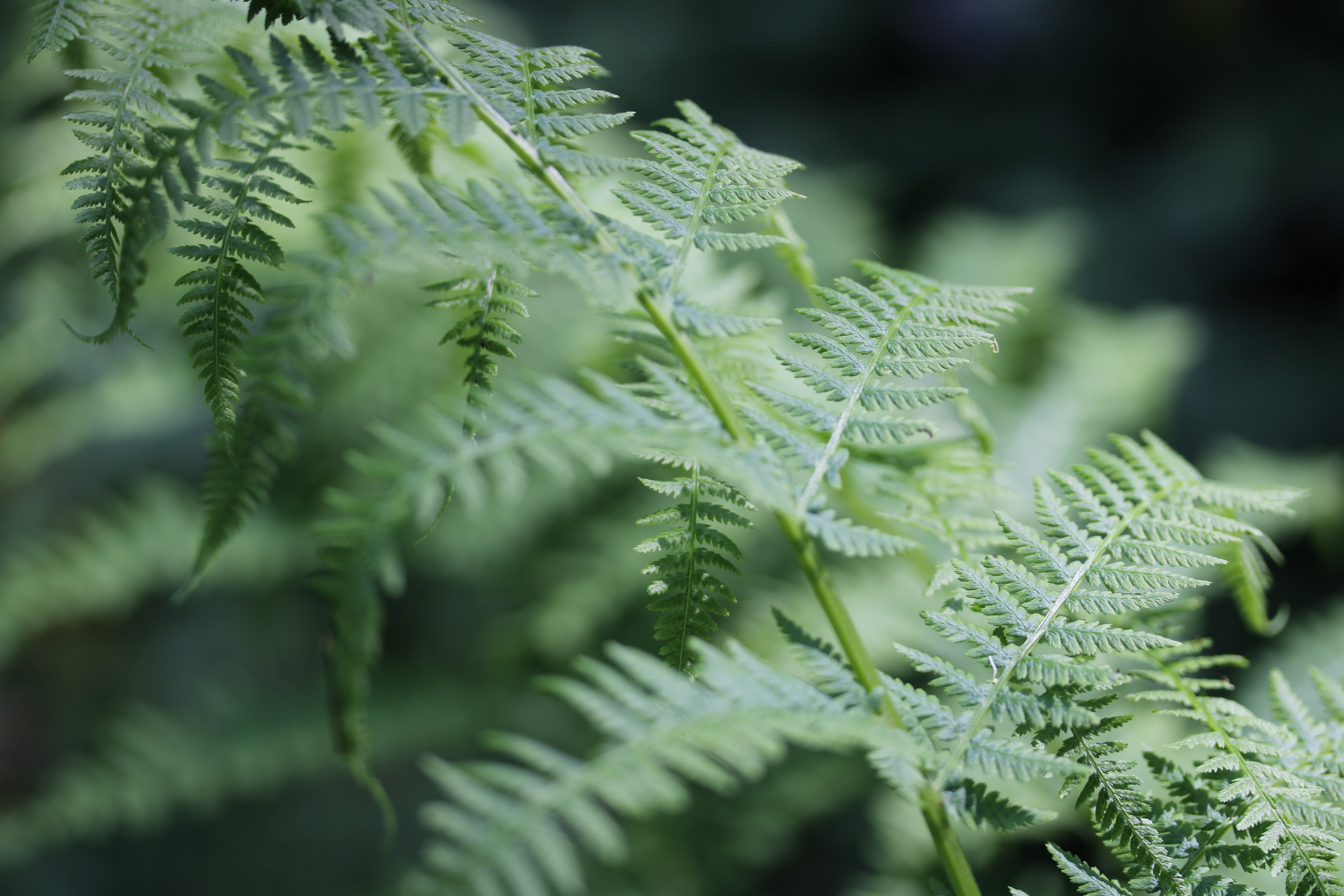 Canon’s EF-S mount is compatible with hundreds of different lenses, giving you room to grow your collection when you get bored of the kit option. This was taken with an EF-S 60mm f/2.8 macro lens. Colours are lovely and vibrant in JPEG images directly from the 2000D – something we’ve come to expect from Canon sensors. In lower light some loss of detail is evident, with areas of the image a little smudgy. This shot has been taken at ISO 640. 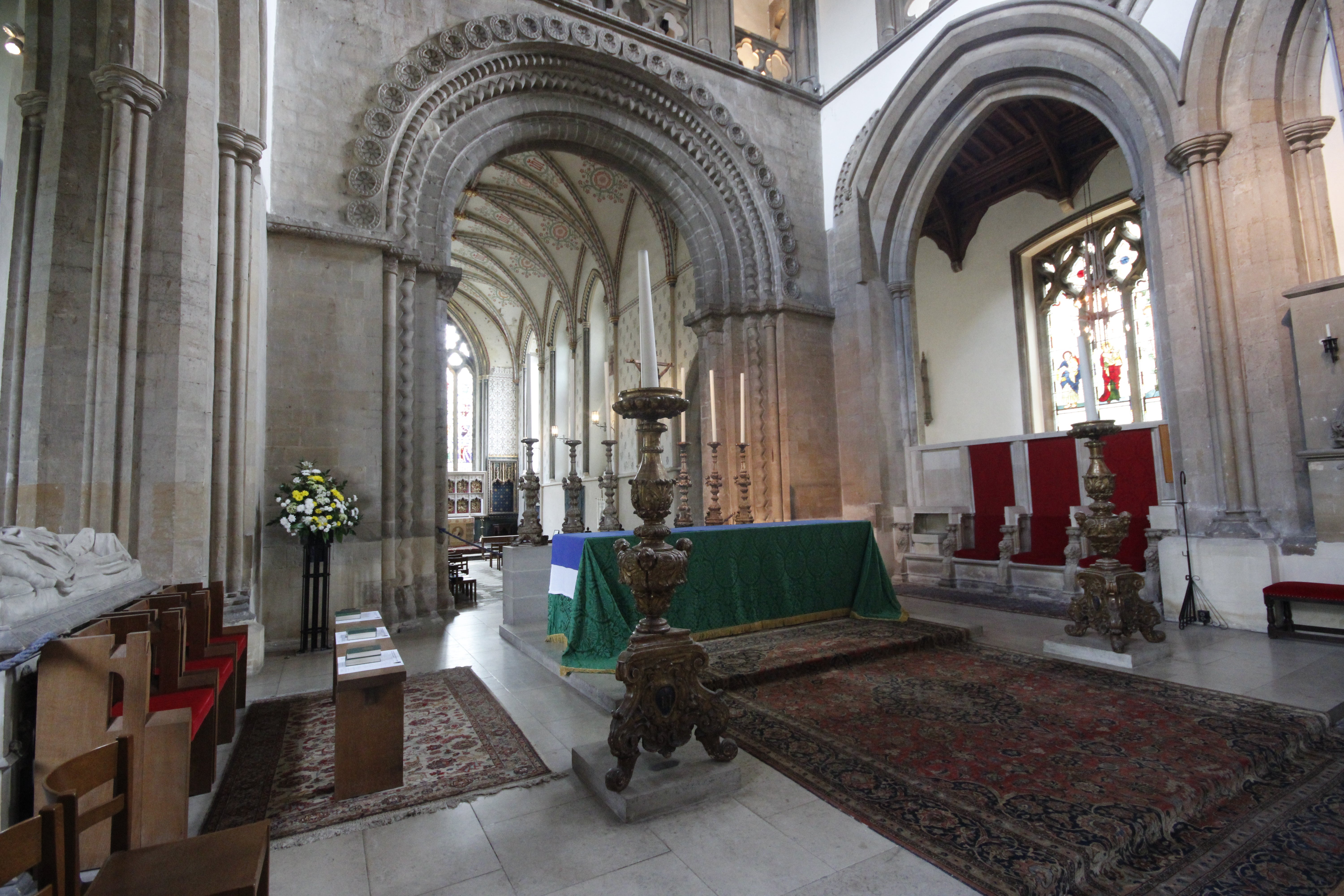 In this image shot at ISO 3200, image smoothing is even more evident, especially when looking at the image at A4 or larger. ISO 3200 is the maximum I’d prefer to shoot at with this camera. On the plus side, the camera’s processing has done a good job of keeping noise at bay. Out of focus areas are rendered nicely, which is one of the benefits a large sensor brings. 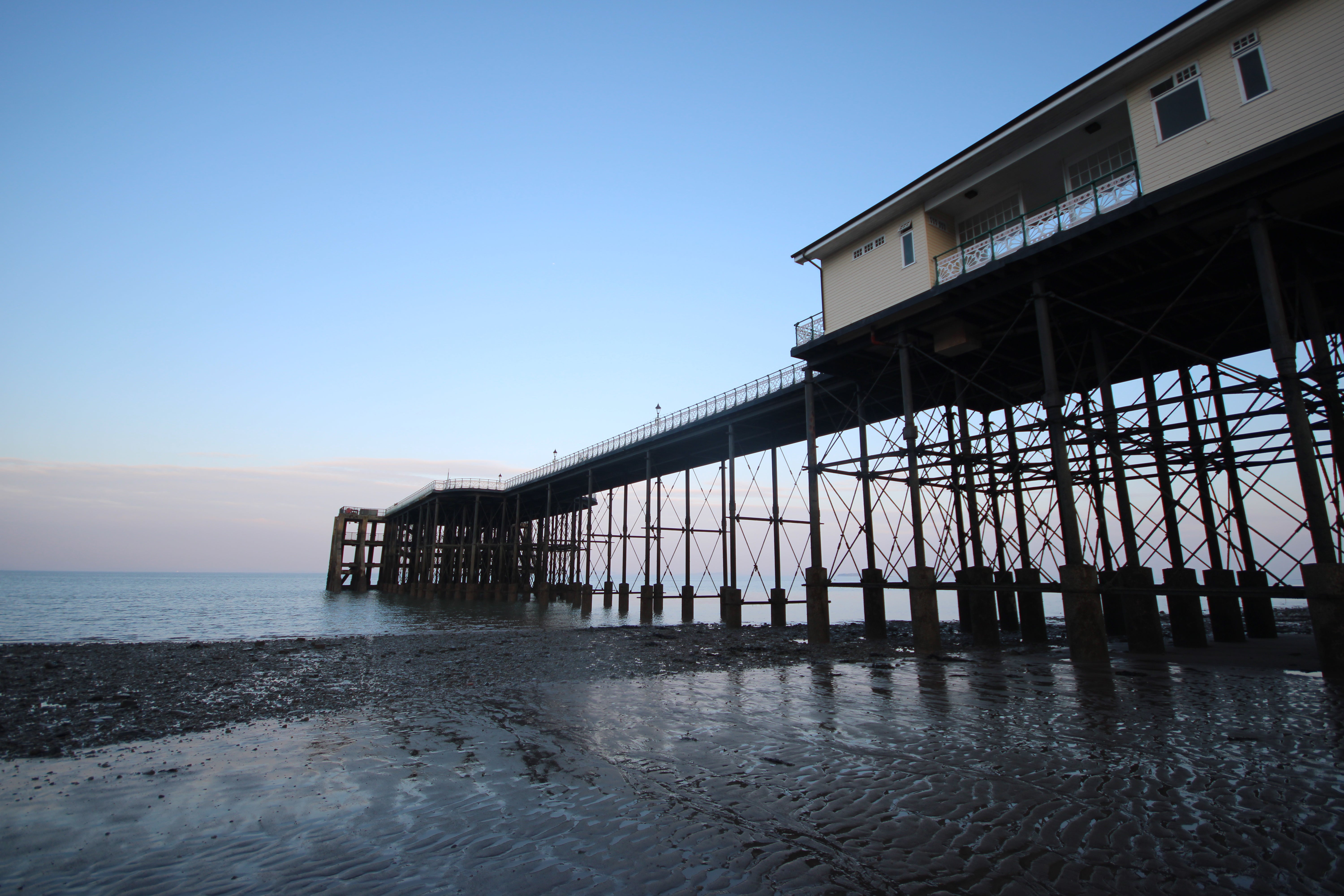 The 2000D’s all-purpose metering does a decent job of getting exposures right. Occasionally, however, when shooting a high-contrast scene such as this, you may find you need to dial in a little exposure compensation to get the look you want. There’s plenty of detail rendered by the 24-megapixel sensor – a resolution increase from the 2000D’s 18-megapixel offering.

Since it’s only a relatively minor upgrade on the 1300D, the 2000D ends up being a bit of a damp squib. It’s disappointing not to see a little more pizzazz and, sadly for Canon, the Nikon D3400 is probably the more sensible choice if you’re looking for your very first DSLR. 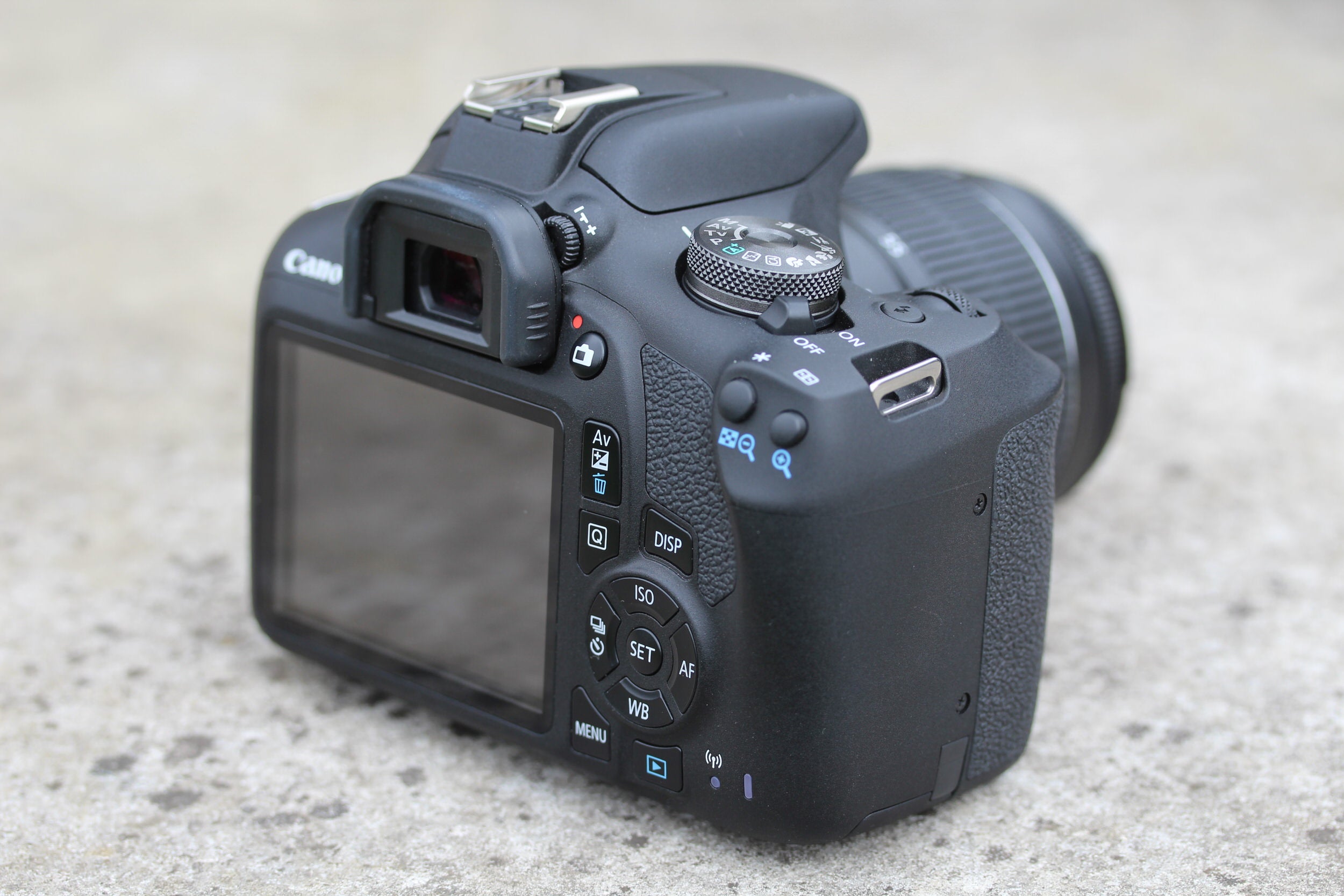 If you’re swayed by the idea of a Canon DSLR and its large range of lenses, however, the 2000D is certainly a model to consider. As it stands, you can pick up the 1300D for around £170 less than 2000D, so if budgetary constraints are your main concern then that would probably be a wiser purchase.

If you can stretch a little, you could – and probably should – also consider Canon’s own 200D, while the 800D would be even better. 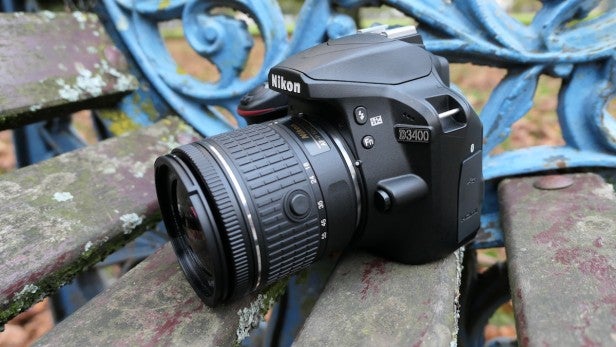 The Nikon D3400 has been around for a while, but remains hard to beat for those looking for their very first DSLR. You get a 24.2-megapixel APS-C sensor, an intuitive guide mode to help you along, 5fps shooting, Bluetooth connectivity and a class-leading battery life of 1200 shots. It’s also significantly cheaper than the 2000D, owing to its older age. 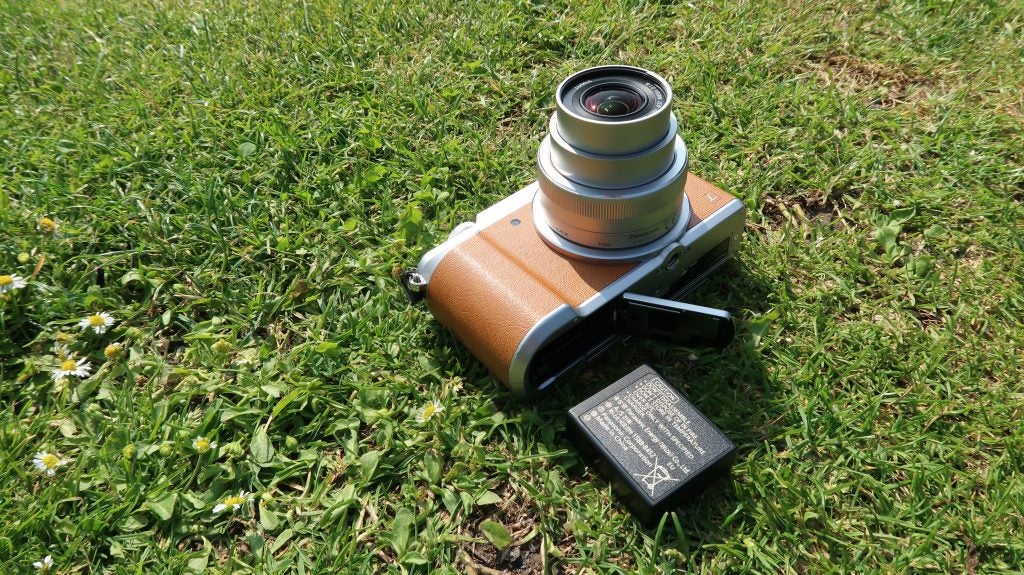 If you just want a first camera, but aren’t rigid about it being a DSLR, then you can do far worse than the Panasonic GX80. This small and light compact system camera is a great option for beginners, but with far more advanced specifications than the 2000D (and the D3400 for that matter).

For around £400 (including a kit lens), you get a touch-sensitive tilting screen, 4K Photo and Video, 8fps shooting, an electronic viewfinder and a 16-megapixel Micro Four Thirds sensor. 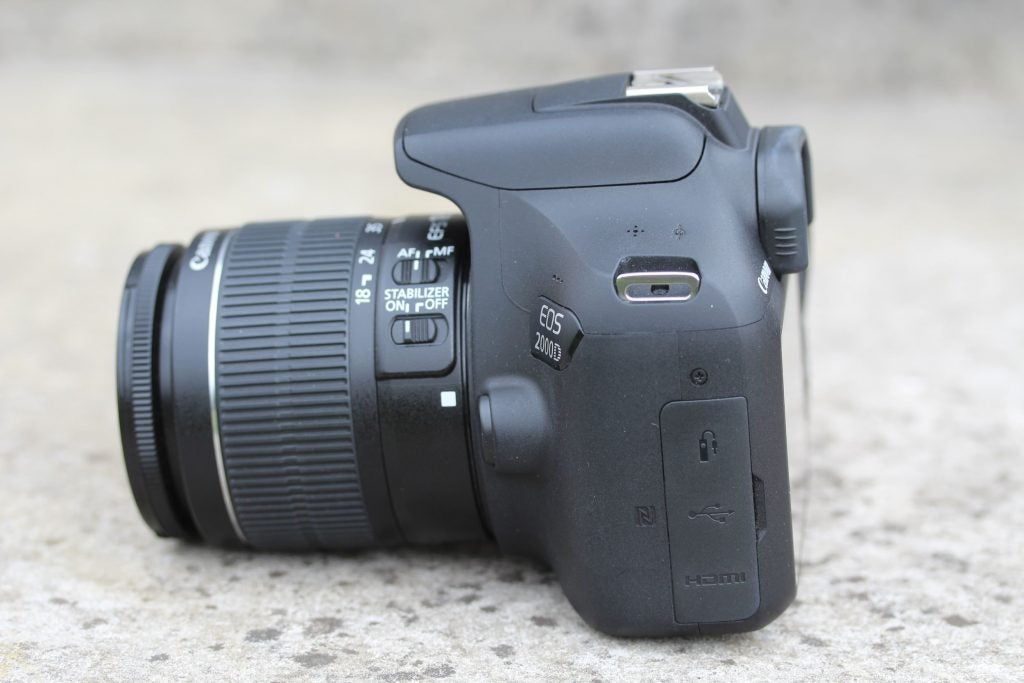 This beginner DSLR is a decent option for a first-time buyer, but is far from the only, or best, model on the market.