Intrigued to find out how the lens’ new optical formula affects image quality, I took a number of comparison shots alongside my six-year-old version of the original lens.

I found the level of detail at the centre of the frame, at the widest end of the zoom range, to be comparable to results achieved with the older lens – and it was a similar story when I compared results half way through the zoom range. 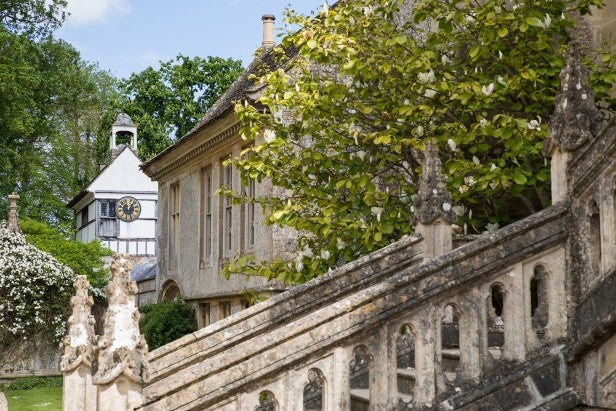 Inspecting the corners of images taken throughout the zoom range at different apertures revealed that the new lens is a little sharper than its predecessor towards the edges. Plus, when I started to push to the far end of the zoom, I noticed that it resolves slightly finer detail in the centre with less chromatic aberration.

Further examination of identical shots confirmed that this new lens controls barrel distortion at the wide end of zoom slightly better, and although vignetting is present when it’s used at its widest aperture, it isn’t quite as severe as it is on the older lens.

After studying real-world examples, I referred to the lab results, which show the lens produces its sharpest results between the centre and edge of the frame at the middle of the zoom range. Stopping the lens down to f/5.6 or f/8 sees the centre sharpness improve at all focal lengths, and while corner sharpness never reaches the level of sharpness resolved at the centre, the lens is sharper towards the corner of the frame at the longer end of the zoom than it is at the wider end. 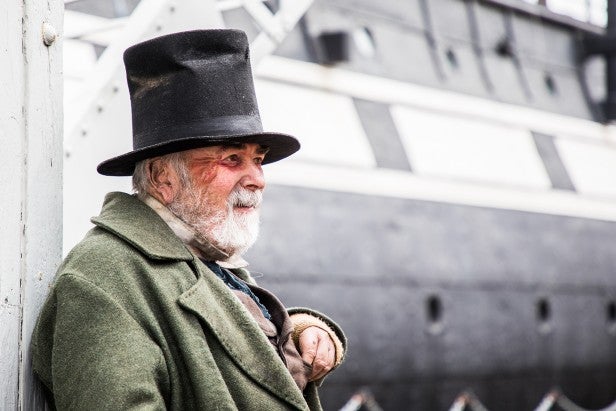 Those planning to regularly use the lens at the wide end are likely to find that the corners of images don’t appear as sharp as the centre, and you don’t gain a huge amount closing the lens down to f/5.6. Centre sharpness figures at f/11 are close to those recorded wide open at f/4, so for the sharpest results at any point in the zoom range you’ll want to use the lens between f/5.6-f/8. You’ll also notice that the impact of diffraction does soften overall sharpness when the lens is used at – or beyond – f/16.

When the lens is used at f/4, at both the wide end and long end of the zoom, the corners appear approximately 1EV darker than the centre. The good news is that corner shading quickly improves by stopping the lens down – and by the time you reach f/5.6, it’s barely evident. Users who shoot at f/4 can effectively remove vignetting by placing a tick in the ‘Enable Profile Corrections’ box within Camera Raw or Lightroom CC. 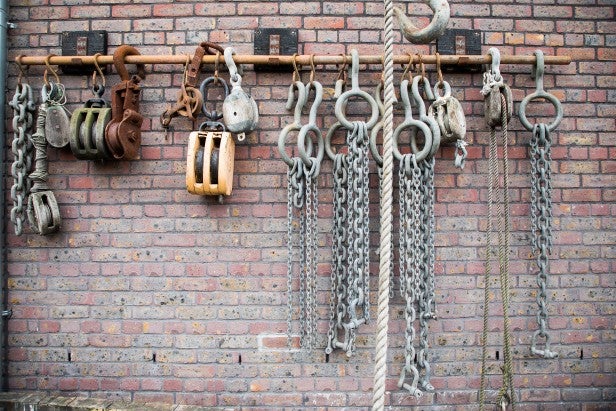 Lateral chromatic aberration is better controlled on this new lens, but green and purple fringing was still traceable and was corrected for effectively by enabling the ‘remove chromatic aberration’ option in Lightroom CC. With regards to distortion, the lens does exhibit barrel distortion at the wide end and pincushion distortion at telephoto lengths – but, again, this can be easily corrected during post-processing by applying the relevant lens profile.

The lab results show that the lens performs best in the centre, with slightly sharper results being resolved at the centre of images towards the middle of the zoom range at f/4, than at the wide or longer end. Centre and edge sharpness improves by closing the lens down to around f/5.6 and f/8, which is to be considered the ‘sweet spot’ of the aperture range.

The lens resolves a similar level of sharpness in the corners at either end of the zoom when used at f/8. The impact of diffraction does soften overall sharpness, and this is most obvious when the lens is stopped down to f/16 or f/22. 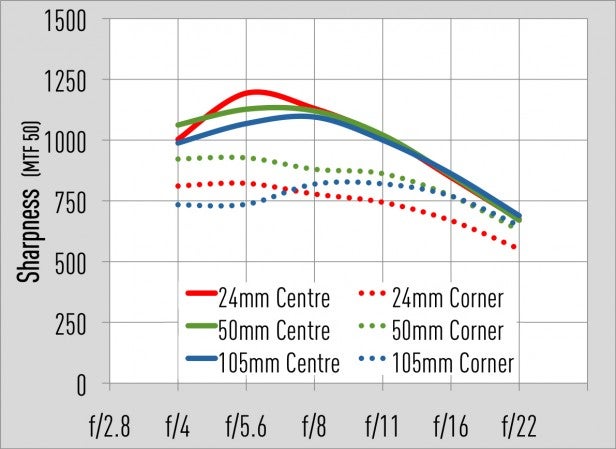 Shoot at the maximum aperture of f/4 and you’ll notice that the corners of images appear darker than the centre by approximately 1EV. Corner shading does improve by stopping the lens down, and by the time you reach f/5.6, you’ll be hard-pushed to notice vignetting in real-world images. To remove the vignetting from our images taken at f/4, we enabled profile corrections from the lens corrections tab in Lightroom CC, which was very effective. 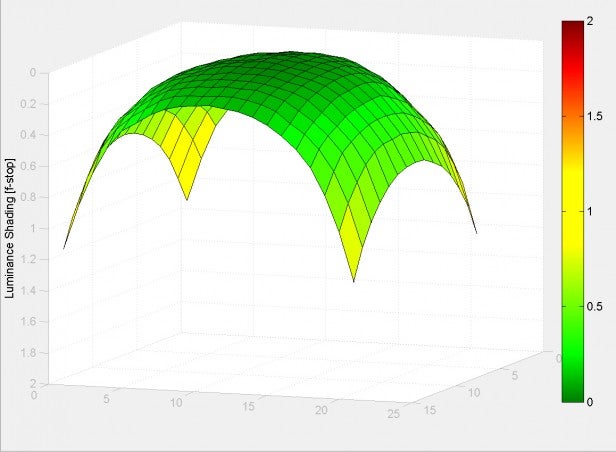 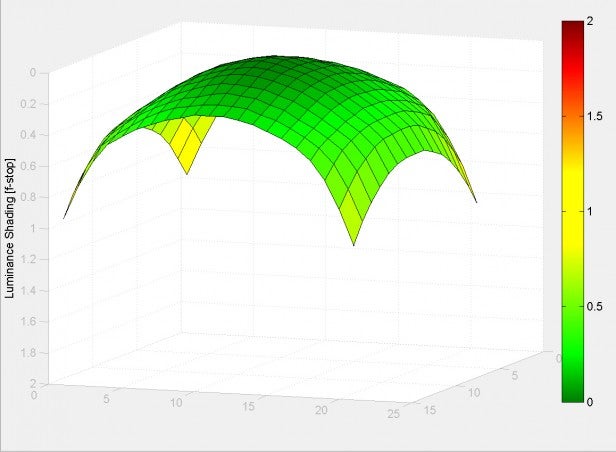 A study of our distortion chart reveals the lens exhibits barrel distortion at the wide end of the zoom, whereby straight lines towards the edge of the frame bow outwards. The amount of barrel distortion subsides as you extend the zoom, but starts to turn to pincushion distortion before 50mm. Although the distortion might not be immediately apparent in real-world shots, it becomes much more obvious when you enable profile corrections and turn it them on and off a few times. 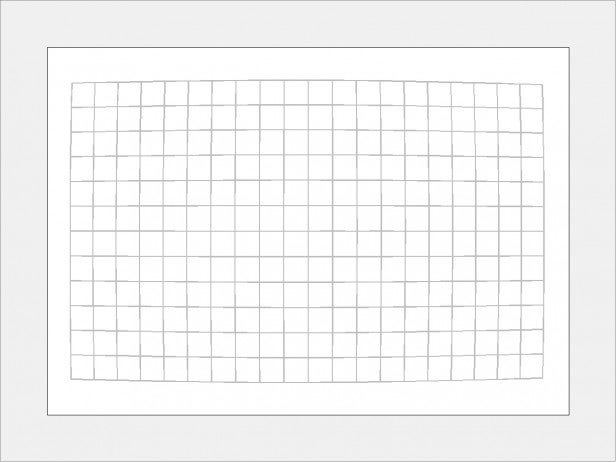 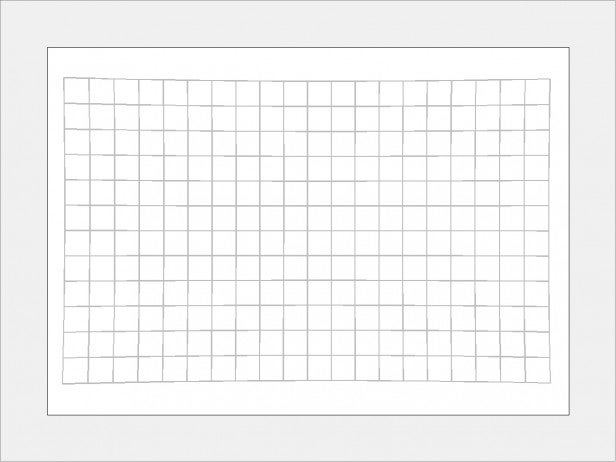 You always find that compromises have to be made when you opt for a zoom over a prime, but if you’re a Canon full-frame user who wants to carry around a single lens that covers a broad focal length range, this lens should be on your ‘to consider’ list.

Image quality has improved; however, those looking at it as an upgrade from the older lens shouldn’t expect a big difference in sharpness. Yes, it’s a touch sharper towards the corners, and was found to control vignetting and distortion slightly better, but I must admit image quality isn’t superior to the extent I was expecting.

Needless to say, for the £700 I’d have to spend to upgrade to this lens, I’ve decided to hold onto the original. 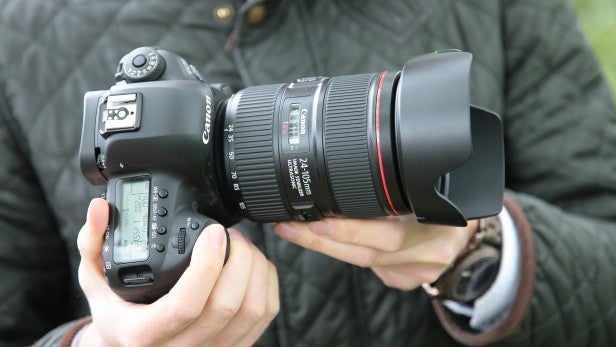 The lens does present other benefits, and thanks to the improved four-stop image stabilisation system, I was able to shoot sharp handheld images with a 1/30sec shutter speed at the long end of the zoom. If you have a steady hand then it’s possible to attain sharp shots at the widest end of the zoom (24mm) using a 1/2sec shutter speed – something that isn’t possible on the older lens.

AF speed remains much the same, but the way the aperture can now be changed silently in Live View will benefit video users.

Simply put, the EF 24-105mm f/4 L IS II USM is the best full-frame standard zoom Canon has made covering this broad focal range, but if you feel you can make do without the extra reach it offers, want to benefit from a faster f/2.8 maximum aperture, and can stretch to the EF 24-70mm f/2.8L II USM (£1734), you’ll ultimately get a sharper lens in return that’s better tailored to your needs.

An improvement on the original EF 24-105mm f/4L IS USM, this is the finest lens covering this focal range in Canon’s EF lens lineup.