As I mentioned in my review of the PowerShot A710 IS last week, Canon launch a lot of new models every year, but even so I was astonished to learn that since it’s inception in June 2000 there have been no fewer than 27 different cameras in the Canon Digital IXUS range. What’s even more remarkable is that for the last six years, those 27 models have pretty much defined the market standard of ultra-compact digital cameras. They have consistently managed to combine stylish design, superior build quality, exceptional performance and cutting edge technology with ease of use and superb picture quality. Of course those advantages come at a price, and the Digital IXUS range has always been expensive compared to its market competitors. 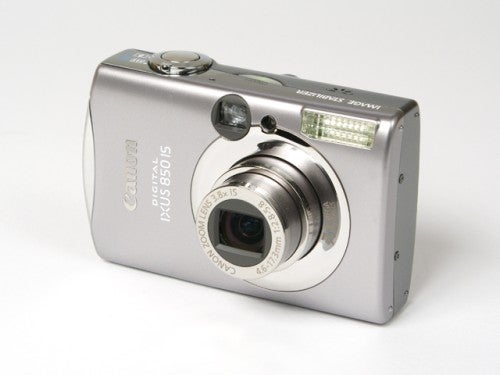 However the IXUS 850 has a list price of a whopping £369.99, and even shopping around on the internet you won’t find it for less than £262.50, making it nearly £100 more expensive than some of its direct competition.


So is it worth the price? Well, it certainly looks as though it should be. Like most Canon cameras the IXUS 850 is very well made. It has a tough all-metal body in a stylish two-tone semi-matt metallic colour with chrome details. It seems to have some sort of clear lacquer finish which resists scratches, so it should stay looking good for longer.


The body is rounded with no protruding edges. The lens retracts flush with the body, and all the controls are smoothed off, so there’s nothing to snag on your clothing. Measuring 89.5 x 58.0 x 25.1mm the IXUS 850 is certainly small enough to fit in a pocket, although weighing a hefty 150g without battery or card you’ll certainly know you’re carrying it. 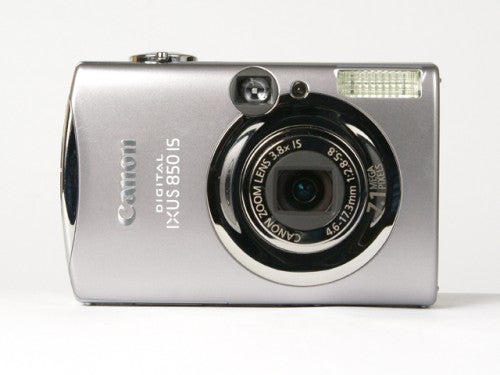 There’s no denying that it’s a very pretty little camera, but it’s also surprisingly solid and comfortable to use. The controls are large, easy to operate and clearly labelled, and the main mode switch on the top right of the back panel doubles as a thumb rest, providing a very secure grip.


The IXUS 850 is designed as a snapshot camera for social use, so its controls and main options are fairly simple and straightforward. This is fortunate, because as usual Canon has neglected to include a full printed manual, opting instead for a printed 32-page basic guide with the full manual included on a CD. They say that you can always print it out yourself if you want, but if I was paying £370 for a camera I’d expect someone to have gone to that trouble for me.

The camera has three basic still shooting modes; a full-auto setting in which only a basic set of options are available, a manual mode in which the full range of settings are open, and a scene mode which offers a limited but useful variety of programs for different shooting conditions.


In manual mode the main functions such as image size and quality, exposure compensation, white balance, metering mode and a wide selection of colour options are accessed via a simple on-screen function menu. It’s worth noting however that despite it being called “manual” mode, there are no manual exposure settings.

Other common options such as macro/landscape focusing, ISO setting, flash mode and continuous shooting mode are adjusted via secondary functions on the D-pad. The main menu is only used for changing infrequently used settings such as AiAF mode, self timer delay, digital zoom (off please!), display overlay and setup settings such as time and date. 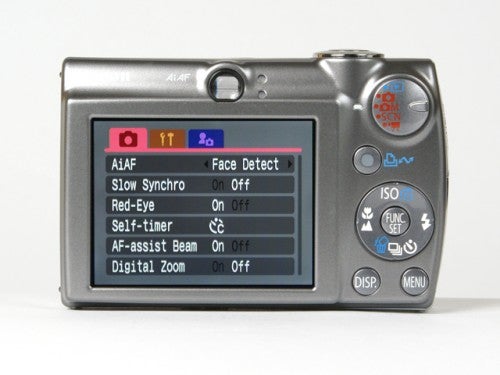 Like the A710, the IXUS 850 has a very good video mode. It offers the standard 640×480 resolution at 30fps, but also 320×240 at 60fps for recording fast action. Movie clips shot in portrait mode (with the camera held on end) are auto-rotated so that they play back in the correct orientation.


General performance is outstanding. It starts up in under a second, which is very fast even for a pocket compact. Canon’s AiAF multi-zone autofocus system is arguably the fastest and most accurate on the market, and here it shows its stripes. In good light focus is almost instantaneous, and has an uncanny ability to focus where you intended rather than on foreground details. Even in complete darkness it can still focus in well under a second thanks to a powerful AF illuminator with a range of around 4-5m. 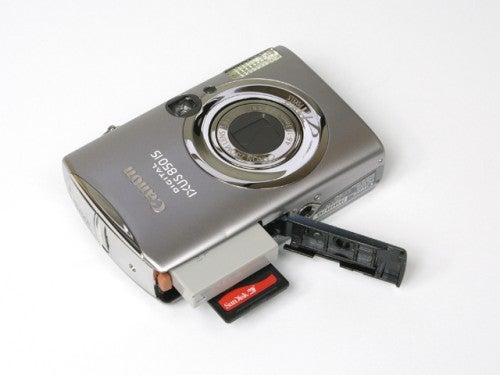 Shot-to-shot time is also extraordinarily good, thanks mainly to the new Digic III image processor. In normal daylight, shooting at full resolution and maximum quality in continuous mode, it can shoot at a constant 0.6 frames per second (10 shots in 6 sec.) and keep it up until the memory card is full. In low light this slows down a little due to the slightly longer processing time, but is still very quick.


I must also mention the LCD monitor screen. It has a resolution of 207k pixels, which is nice and sharp, but it also has a superb anti-glare coating, so it is viewable even in bright sunlight. It has an exceptionally wide viewing angle, making it possible to frame shots while holding the camera above your head.

So far so good, but what really sets the IXUS 850 apart from the other cameras on the shelf is the sheer amount of advanced technology that Canon has been able to cram into it. There’s nothing that is really ground-breaking, and all of the systems and ideas have been seen before, but not combined in such a small package.


It features Canon’s acclaimed optical image stabilisation system, which provides around 2-3 stops of extra low-speed hand-held shooting, useful in low-light situations. It also has an advanced face-recognition system which allows it to automatically find any human face in the frame, focus on it and set the exposure accordingly. 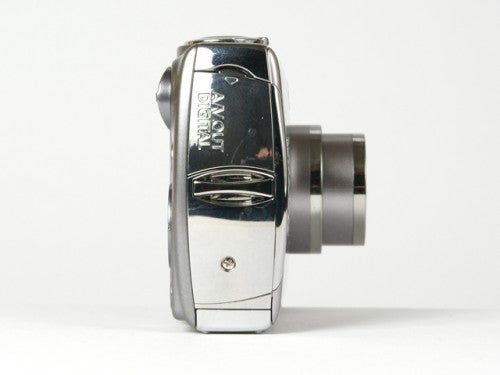 Another stand-out feature is the lens. Most 3x zoom compacts have a wide-angle setting equivalent to around 35-38mm, but the IXUS 850 has a 3.8x zoom with a range equivalent to 28-105mm, ideal for landscapes or big group shots at close range. As usual with Canon optics, the lens is of very high quality, producing extremely good edge-to-edge sharpness, and with less wide-angle spherical distortion than most. Combined with the Digic III processor it provides some of the best image quality I’ve seen from a pocket compact. Colour rendition is especially good; even when I deliberately tried to confuse the auto white-balance setting it still got it right. The only criticism I could find was some minor blue fringes on some high-contrast edges, but only under certain conditions. 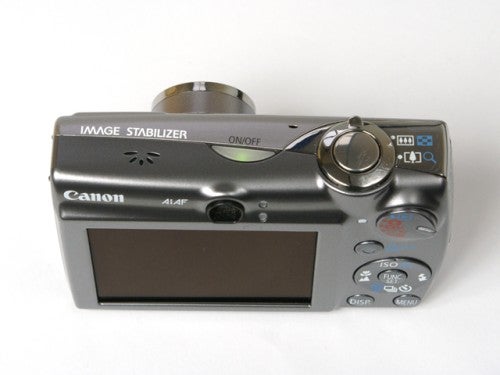 The Digic III processor also gives the IXUS 850 a great ISO range, from 80 to 1600, with exceptionally low noise levels. Images shot at 400 ISO are virtually noise-free, and even at 1600 ISO the visible noise has none of the red/green colour speckling usually produced by other high-ISO cameras. Of the cameras I’ve seen recently, only the Fujifilm F30 has better high-ISO performance.


The Canon Digital IXUS 850 IS combines every piece of cutting edge technology currently available in the digital camera market into one beautifully made high-performance package, and tops it off with superb image quality. It’s an expensive luxury gadget, but if you really want the best then you should expect to pay a little extra for it. 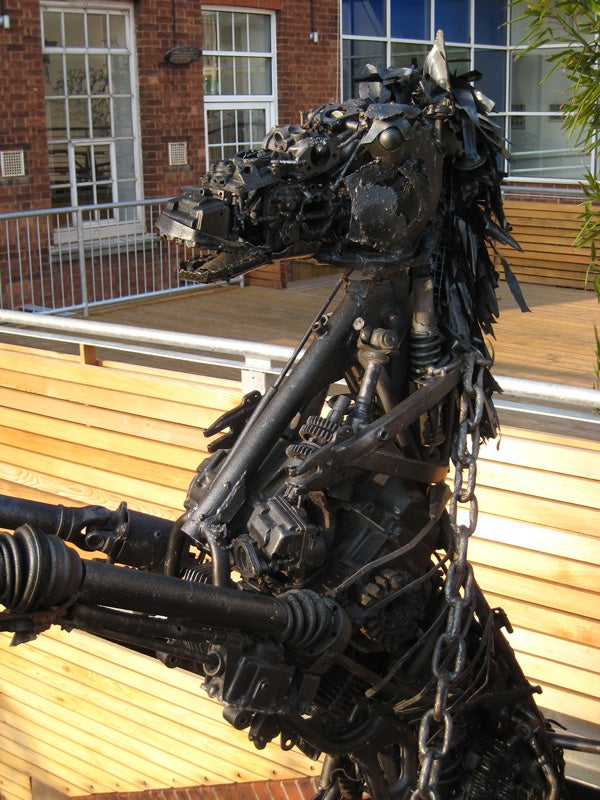 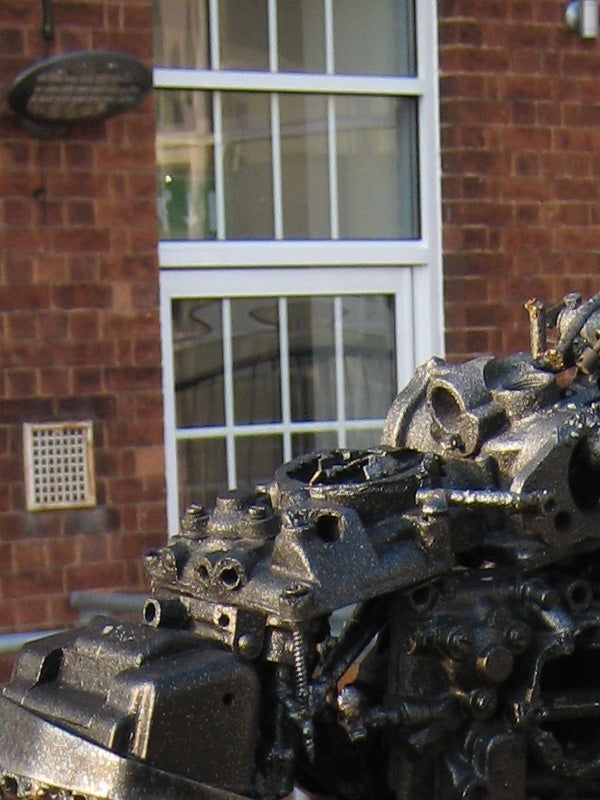 At the minimum 80 ISO there is no noise. Is there ever? The mane on this horse sculpture is made out of old recording tape and blows in the wind. 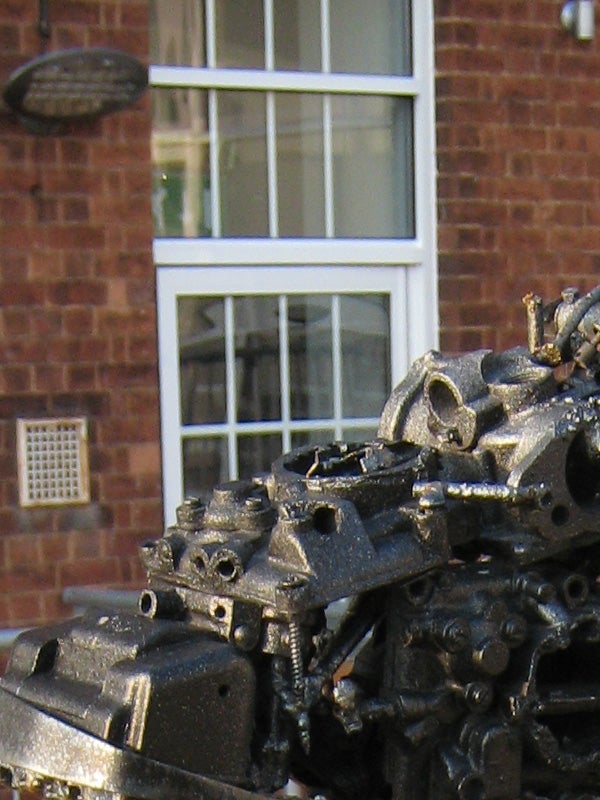 At 100 ISO, just 1/3rd of a stop faster, there is still no image noise. No surprises there then. 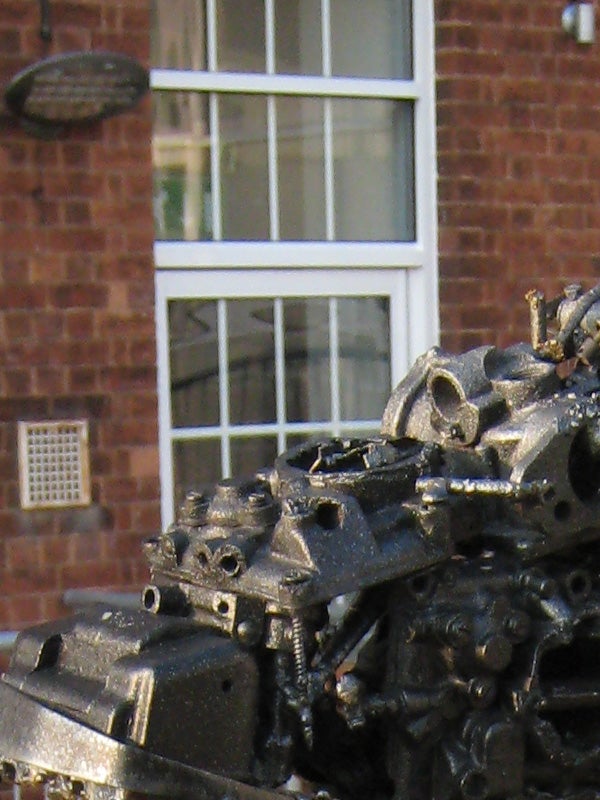 Double the ISO to 200, and most cameras are starting to show a bit of speckling. The IXUS 850 however remains noiseless. 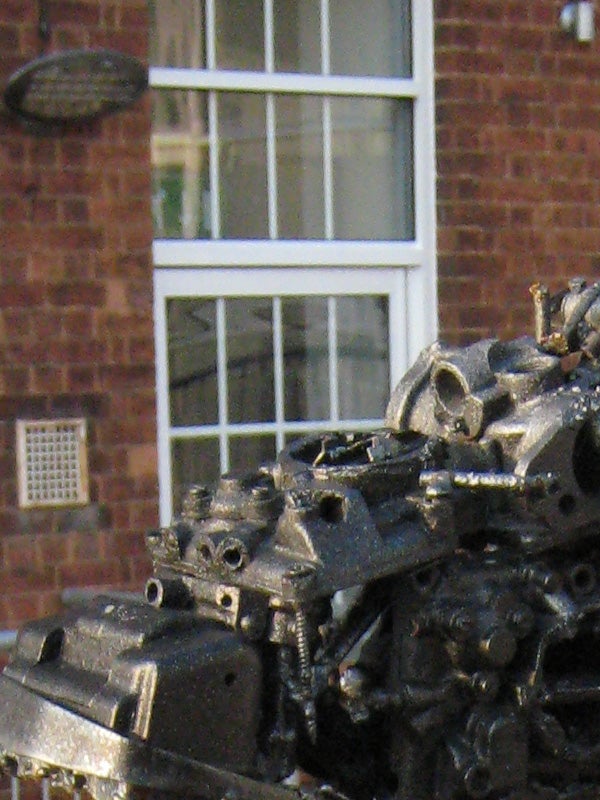 There’s just a hint of speckling in the darker areas, but the shadows are still deep and black, and the image quality is virtually unaffected. On most other cameras the image would be unusable at this speed. 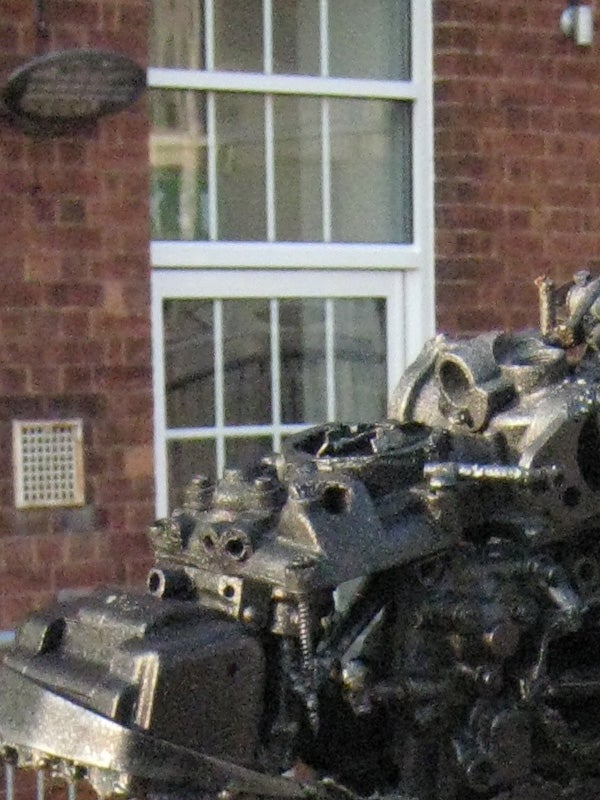 At 800 ISO there is some image noise, but it’s an even speckling with none of the colour channel noise usually seen in high-ISO shots. Some detail has been lost though. 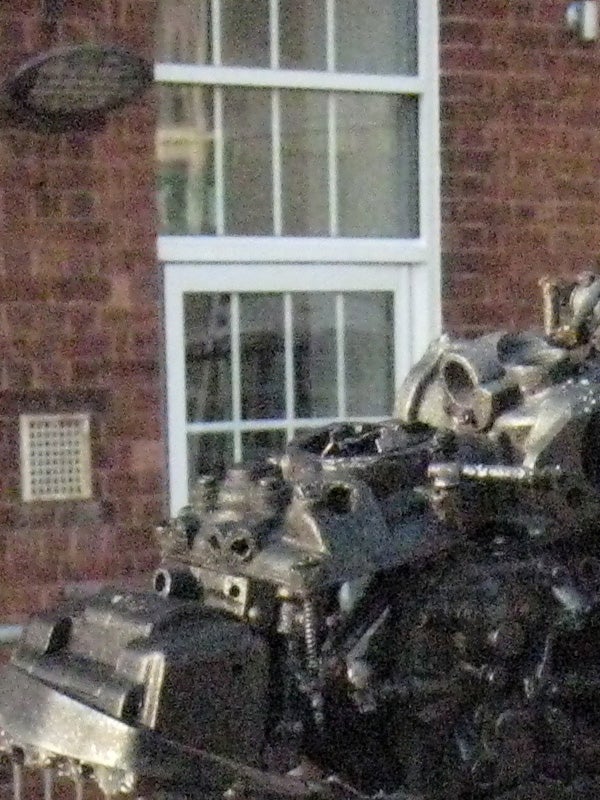 At the maximum ISO setting of 1600 there is plenty of image noise, but it is even and fine textured like film grain and has no colour distortion. An impressive performance. 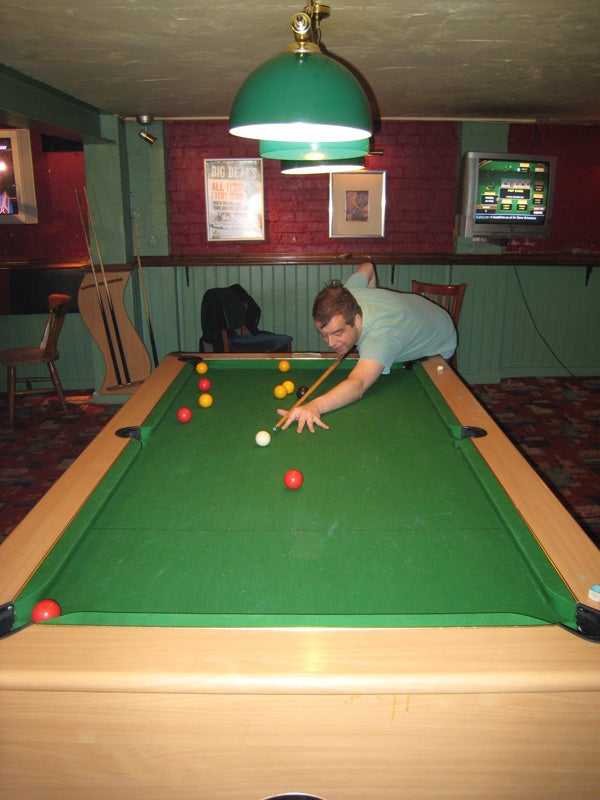 After the dismal performance of the A710’s flash last week, it’s good to see that the flash on the IXUS 850 works perfectly. 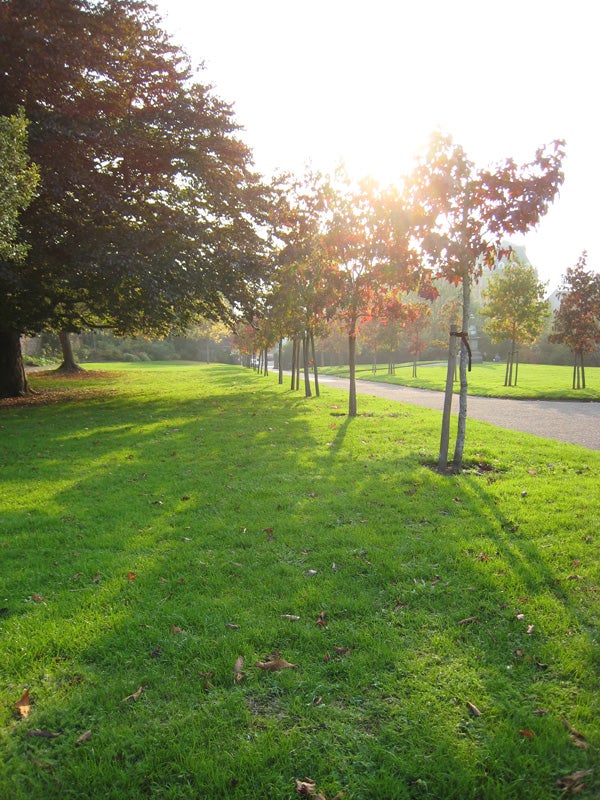 A shot like this is never going to look good, but the Canon has coped better than most, retaining plenty of detail in the shadow areas and avoiding fringing on the burned-out highlights. 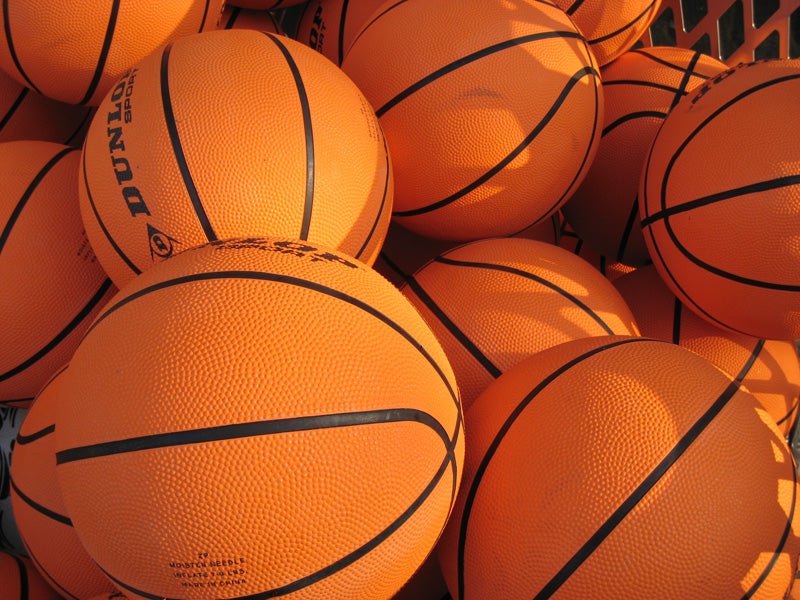 With this much orange in the scene, some auto white-balance systems would have added a colour cast, but the Digic III processor is made of smarter stuff. 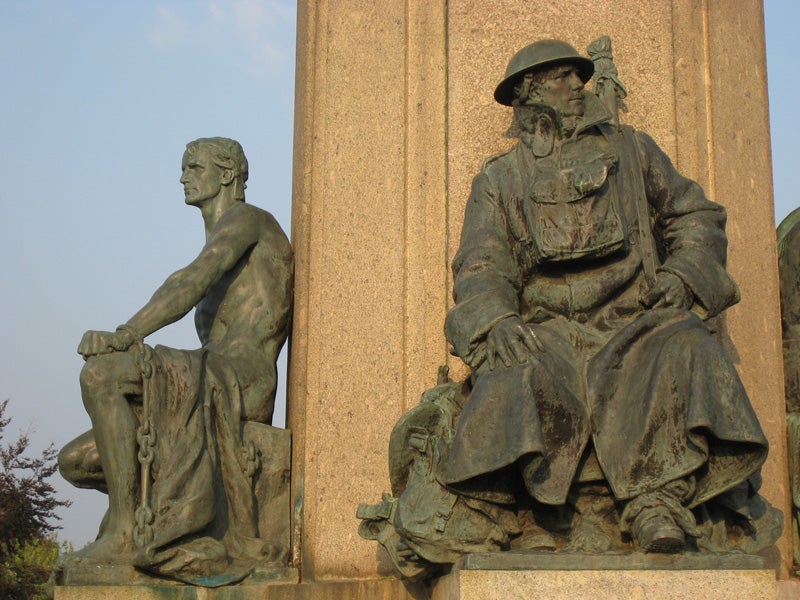 The IXUS 850 has a good zoom control, allowing accurate framing for some arty snapshots. 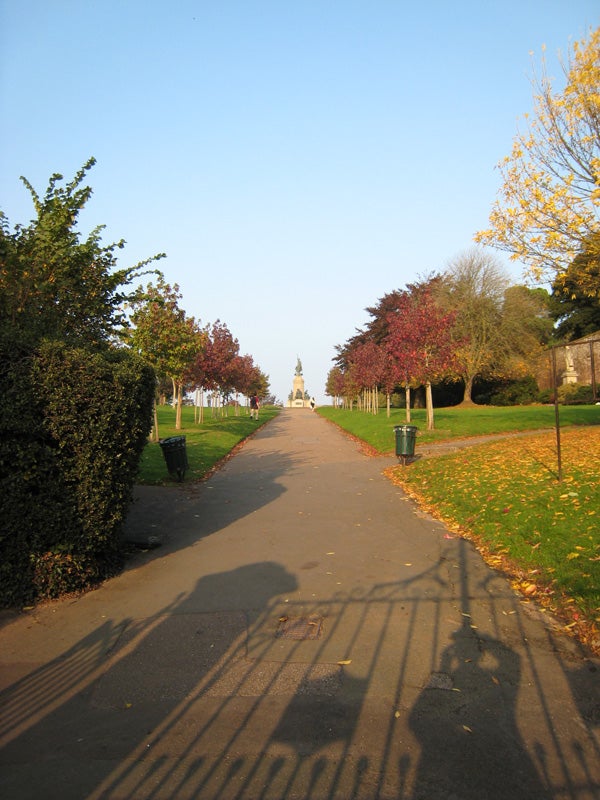 The wide-angle end of the zoom range is equivalent to 28mm on a film camera, good for panoramic landscape shots or large groups at parties. 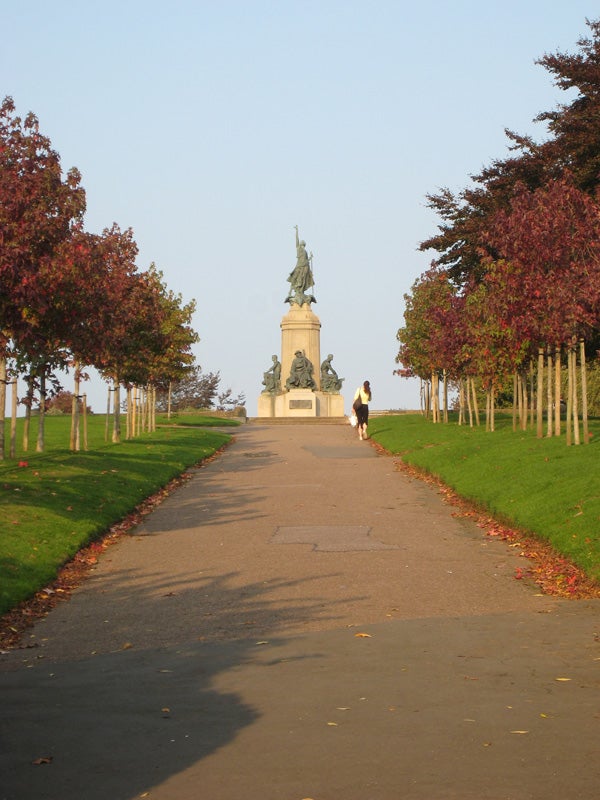 Taken from the same spot as the shot above, this shows the telephoto end of the 3.8x zoom lens, equivalent to 105mm. 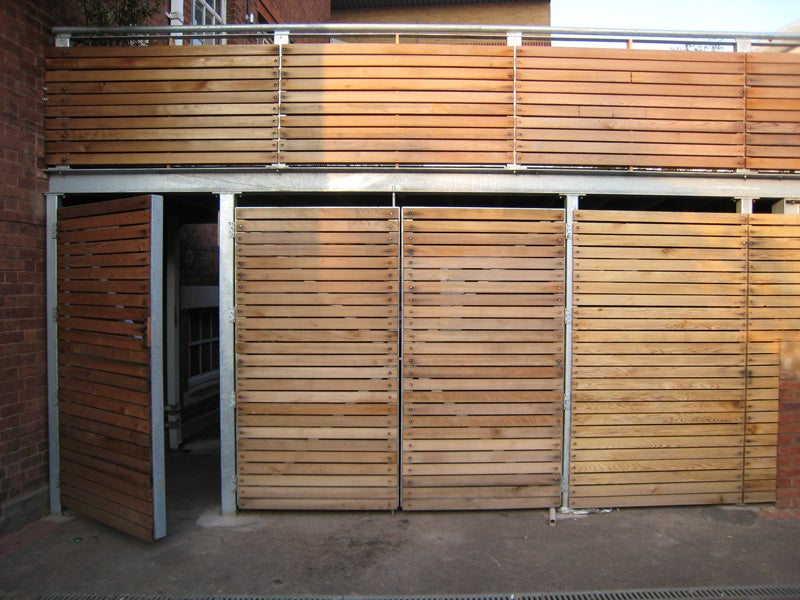 Despite being wider than most, the Canon lens produces very little spherical distortion, although there is some blue fringing in the top right. 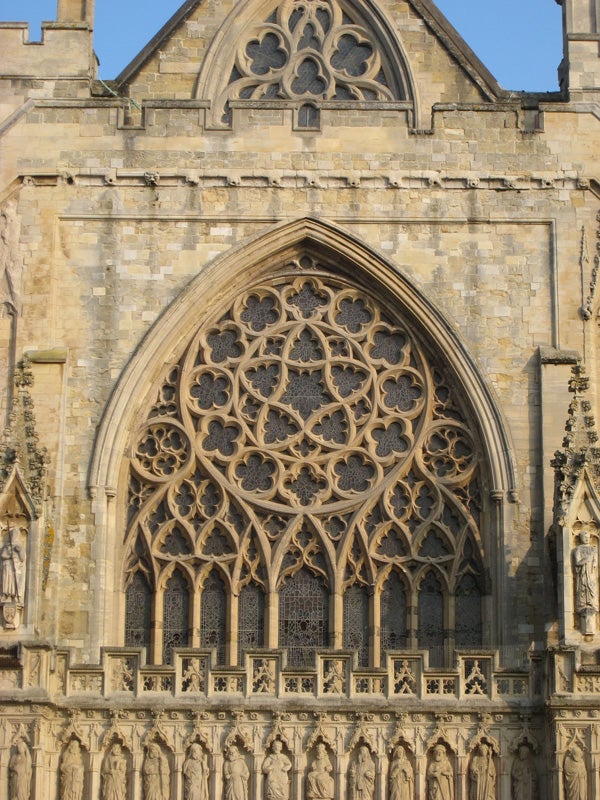 My usual shot of the front of the cathedral for detail comparison. See the full-size blow-up below. 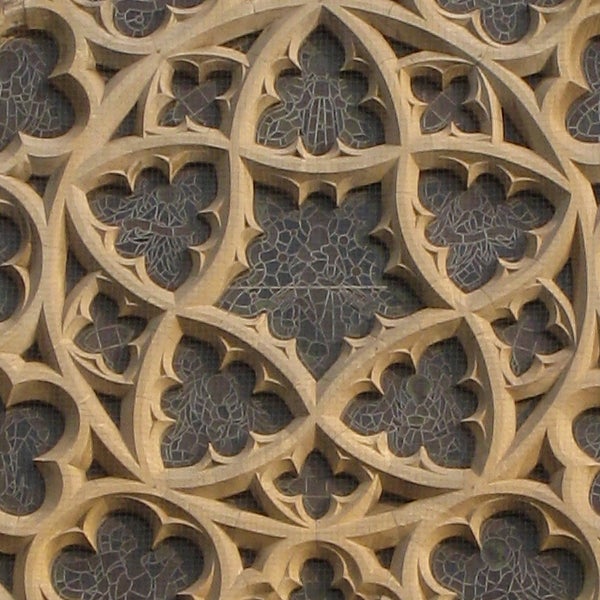 This 600×600 crop shows a section of the above image at full resolution. You can just make out the anti-pigeon netting.